Thievery, Fraud, Fistfights and Weed: The Other Side of Community Gardens - Modern Farmer
Lifestyle

Thievery, Fraud, Fistfights and Weed: The Other Side of Community Gardens

Community gardens throw a cross-section of people cheek-to-cheek, shovel-to-shovel, on a continual, regular basis. There's bound to be some issues. 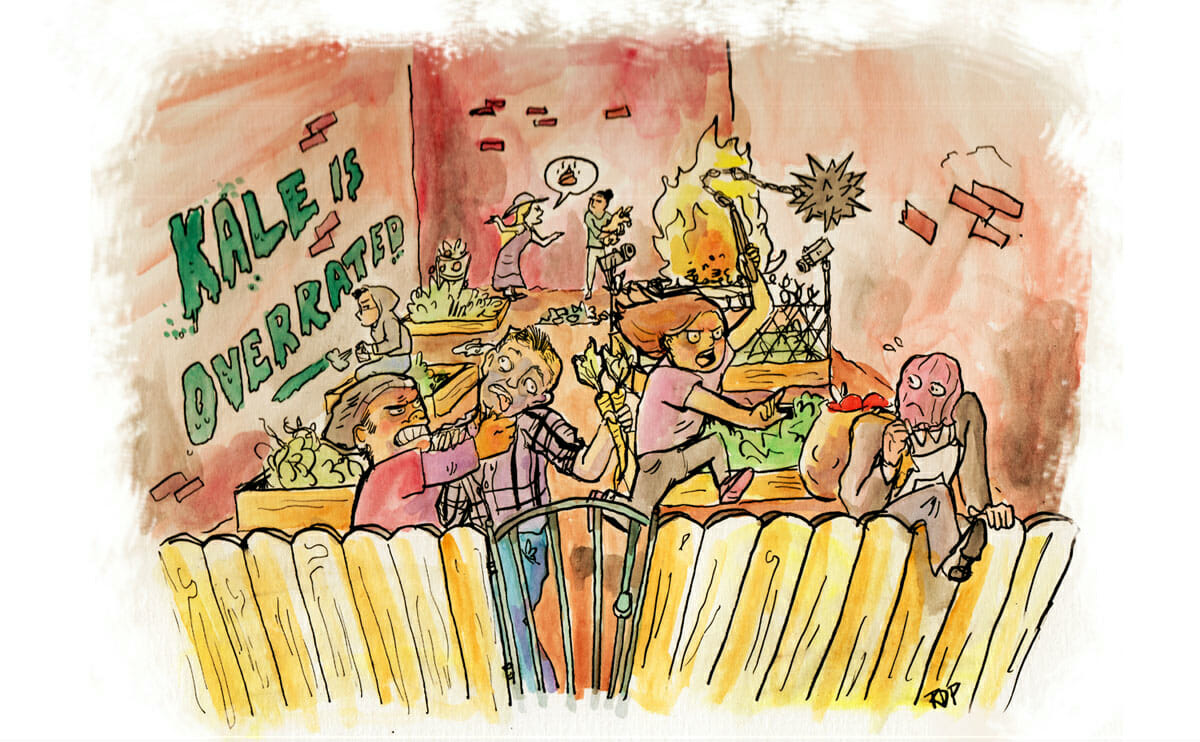 “People have this idea, because it’s a ‘community’ garden, you’ll have a bunch of people sitting around holding hands, singing ‘Kumbaya,'” says Julie Beals, executive director of the Los Angeles Community Garden Council (LACGC ). “Have you seen an actual community?”

Community gardens throw a cross-section of people cheek to cheek, shovel to shovel, on a continual, regular basis. There’s bound to be some issues.

“People never fail to both delight, disappoint and exasperate me,” says Laura Campbell, a community gardener in Albuquerque, New Mexico. “The garden is micro community living — heck, it is Syria, Iraq, USA, Russia — just in plots and plantings.”

Johanna Collins* (not her real name) tends a community garden plot in Spokane, Washington. Or at least she used to: after multiple squash and onion thefts, she ripped up her plot in frustration. “I am done,” Collins says. “If I want to garden again, I’ll buy a house with a yard.”

Scrolling through community garden message boards, you can find dozens of similar indictments. In Galveston, Texas, one woman says fellow gardeners stole her eggplants and lopped the heads off her sunflowers. Another gardener plans to buy magnetic sensors and decoy tomatoes to trap thieves. Bobby Wilson, president of the American Community Gardening Association, says he’s encouraged people to shake flour on their plants: “Would-be thieves think it’s some kind of poison,” he says.

Some theft comes from hungry outsiders, but there’s plenty of inter-garden pilfering too, with motives ranging from gluttony to spite. (Collins is convinced a greedy garden member made off with her zucchini.) More gardeners are now locking up their plots, according to Beals, an added layer of security on top of perimeter gates. The downside to this trend? She says people now steal each other’s combination locks.

Some community gardens grow a certain amount of communal produce, free for the taking. This bus stop garden in London found it was a good way to cut down on stealing; Beals agrees. “Instead of more locks and fences, we try to encourage communal areas with fruit trees,” she says. “If we ask people to take from that area, they’re more likely to leave the other stuff alone.”

(The Canadian city of Edmonton has a cute list of ways to handle garden theft, like posting signs that say “Do Not Steal.”)

Beals says in poor neighborhoods, people steal produce out of sheer desperation — they need to feed their families. But in wealthier areas like Hollywood, gardening is a fashionable hobby, easy to drop. “You get young people moving in, think it’s cool and trendy to garden organically,” she says. “But after a few months they realize it’s too much work. They let their plots sit, abandoned.”

Other issues can include hard partying in the gardens, with a fair amount of heavy drinking and drugs. On multiple occasions, the LACGC has had to step in when they’ve found pot plants growing in people’s plots. (The procedure involves a few polite written warnings before the council cleanly digs up the offending plants.)

Removal of the homeless also comes into play. Gardens have a fenced-off leafy appeal; Beals says it’s common to find people bedding down among the produce. It’s not her favorite role, but the LACGC performs swift evictions.

The Los Angeles Community Garden Council budgets for a certain amount of equipment theft every year. Wheelbarrows and tools will always be a hot commodity — Beals calls it a write-off. “We can paint ‘Community Garden’ on all our stuff and hope for the best,” she says. “But when you’ve got so many people making their income tending rich people’s gardens, you have to make peace with some loss.”

Other communities take these thefts a little harder. This April in Boston, the robbery of water piping from a community garden was called “devastating.” In Tampa, the August robbery of tilling and mowing equipment led to an outpouring of community support and sympathy. A Houston group of community gardens lost $4000 worth of equipment in September; “I don’t know how we are going to be able to go forward,” said a garden director.

Some garden theft is straight cash money. Most community gardens require some type of member dues; Beals says allegations of fraud are common. Members accuse garden directors of skimming some off the top, or of pocketing cash without issuing receipts. “These allegations come up all the time,” she says.

Urban neighborhoods often encompass two or more distinct ethnic or racial groups. If these groups have tensions, expect them to play out in the garden. The most marked recent example is the Queens flare-up, where an old guard of Korean gardeners threatened to kill themselves — and others — when the city tried to make them share the garden (check out some fistfight footage here).

Beals says L.A. neighborhoods have lots of cultural crossover, mostly peaceable. Still, some cultures use traditional gardening techniques that their neighbors don’t dig. In the Crenshaw Community Garden, Korean gardeners shade their plots with vines that reach up to eight feet; neighboring gardeners don’t appreciate the shade. Other feuds arise over watering times. “Some cultures say you should water between 6 and 10, others say early afternoon,” Beals says. “It’s old country stuff.”

Kuki Tautuaa is a 55-year-old Polynesian woman in South Central L.A., one of two non-Hispanic gardeners in the Stanford-Avalon Community Garden. Tautuaa claims the garden’s board of directors has been trying to get rid of her for years, refusing to take her dues, telling her she isn’t welcome, even chopping down her prized plumeria plants. “I feel like that person in the Bible, you know, who got stones thrown?” she says. (Irma Gamboa, the garden’s director, was unavailable for comment.)

Many community garden feuds are small. Campbell claims a fellow gardener took over her plot while she recuperated from a broken leg. Collins got into a flame-out with her garden’s manager, after the woman watered her plants without her asking (“I don’t want root rot!”) One gardener in Atlanta describes a “nightmare situation”: a child knocked over his blueberry bush and someone gave him low-quality soil.

Each Los Angeles garden holds a monthly meeting, where LACGC members listen to people’s complaints and attempt to mediate. These meetings get heated; yelling and screaming are common. Still, it’s all part of the process. Beals believes it’s all part of neighbors getting to know each other, learning to work side-by-side.

“You start from a place of isolation, right? People are sitting at home, watching TV, not getting to know their neighbors,” Beals says. “Getting them into the garden is a wonderful thing. It’s just, after a few months, people realize they don’t like their neighbors as much as they did from a distance.”

Thank you for supporting your article with factual events and real life problems. You are right in saying that no one talks about these challenges enough. I am a garden manager and I am lucky to not have seen such aggression but I have had passionate people speak aggressively toward me. Usually they are under the assumption that I work for the city and have resources, knowledge and money to fix everything and I don’t. I would like to read more articles about community gardening like this and if there is a model of community gardening that can avoid escalating… Read more »