In a London neighborhood packed full of low-income housing projects, overrun with gangs, prone to fits of senseless brutality, one bus stop is sprouting a cornucopia of fruits and vegetables. 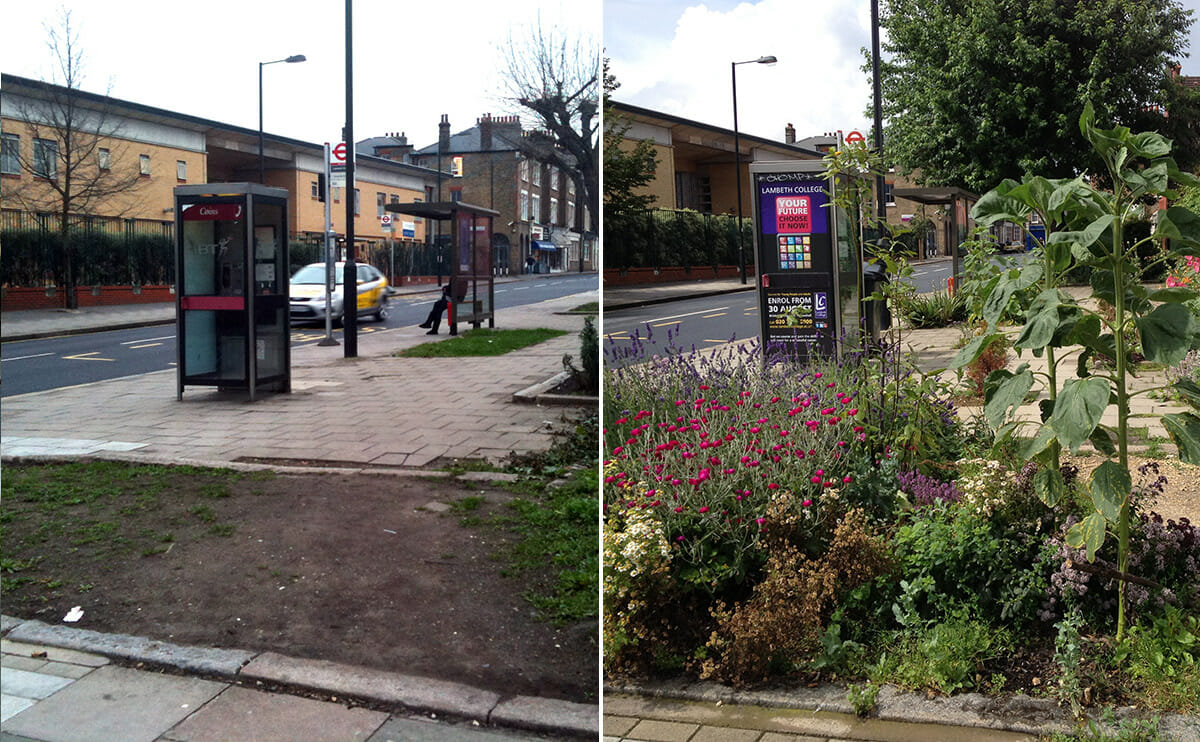 Gilchrist is blunt – she says it was a “bloody nightmare.”

“But I’ll tell you one thing,” she adds. “There’s been no violence in the garden.”

She’s referring to a verdant, 450-square-foot edible garden, plotted in the most unlikely of places — a municipal bus stop in the hood’s very heart. The Edible Bus Stop‘s credo is: “A brutal landscape brings a brutal outlook.” The garden aims to bring a little softness to a hard-edged place.

Urban community gardens are typically kept behind gates, out of easy public access. By contrast, both Edible Bus Stops (there’s another in West Norwood) are right there on the street, at the mercy of peeing dogs, vandals and trash. Yet somehow — likely due to each neighborhood’s sense of communal investment — these gardens remain largely safe and clean.

Edible Bus Stops are right there on the street, at the mercy of peeing dogs, vandals and trash.

Gilchrist is a former model, with 30 years of experience in the fashion industry. Before 2011, she kept the lowest possible profile in her neighborhood, heading from home to work and back again. She didn’t know most of her neighbors; she minded her business.

At that time, the area around the bus stop was a green space, but just barely: some neglected shrubs, flower beds without flowers, a maple tree. When notices went up that the area was slated for development, Gilchrist was struck with an unexpected sense of purpose. “I was horrified. [The green space] wasn’t much, but it’s all we had,” she said. “I had to do something.”

Gilchrist — who had zero experience with gardening, or community activism — helped rally about 30 of her neighbors, most of them strangers, to a local pub. Turns out everyone in the room had noticed a small patch of guerrilla veggie gardening in their neighborhood. What if all 450 feet around the bus stop went edible?

Gilchrist soon linked up with designer Will Sandy to aid with Edible Bus Stop’s layout and aesthetics. The rest of the story was pitch-perfect movie magic: The development was blocked, vegetables were planted, a community banded together. The project’s charms gained traction quickly. Gilchrist and company were lauded all over London, including from Mayor Boris Johnson. Soon other neighborhoods wanted Edible Bus Stops.

Gilchrist and Sandy helped set up the second garden at a West Norwood bus stop, and will continue to help with others around the city. Still, they are very clear about who’s in charge. “We tell people: ‘This is your garden, not ours,'” says Gilchrist. “To succeed, each neighborhood needs to take ownership.”

The Edible Bus Stops also picked up a glamorous side mission along the way. Gilchrist now combines her fashion background with Sandy’s design sense to create pop-up garden art. In one installation, plants sprouted out of London icons — vintage taxicabs, red phone booths, etc. In another, ivy was draped over a wall of custom graffiti from LA street artist Risk. “That one was kind of controversial,” Gilchrist recalls.

The pop-ups are a gas, but edible urban gardens remain the core of the project. Gilchrist is still amazed at how much a small garden can reshape a neighborhood. She sees young lovers canoodling on newly built garden benches; neighbors shooting the breeze over a tomato bush; even the neighborhood tough guys have gotten into it.

“These mean-looking guys in hoodies, who you sometimes see hanging out on the street, stopped me to talk. I was a little nervous,” she says. “Then they told me: ‘Don’t worry luv, no one will mess with your gardens while we’re around. It’s a good thing.'”