Why colony collapse, Chinese consumer habits, weather patterns in the Midwest, economic sanctions against Iran and even nicotine will mean you'll pay more for that bag of California almonds. 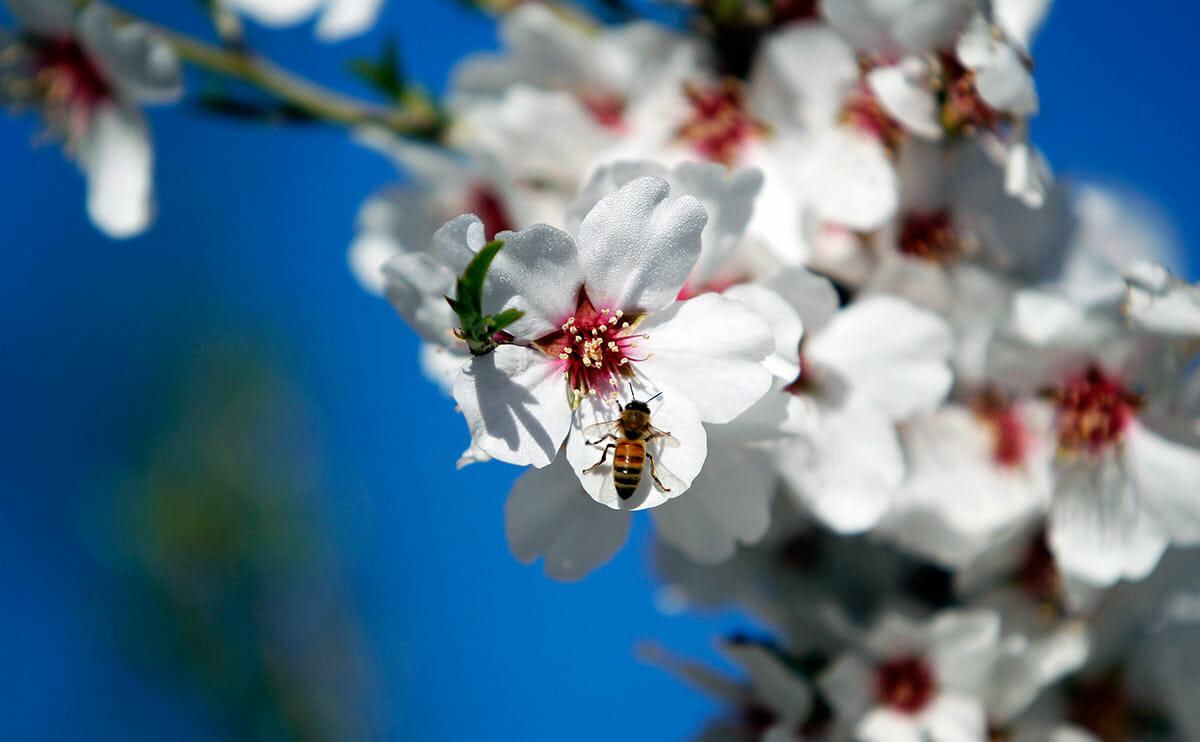 Yes, nicotine. A somewhat new family of pesticides called neonicotinoids (chemically similar to the nicotine found in tobacco) are suspected of being a major cause of dying bee populations. They have been banned in the European Union because of their possible role in colony collapse disorder (CCD), but are still used in California, where 80 percent of the world’s almonds are grown.

It’s still not definitively known how much of the blame for CCD — bee populations are down by 30 to 40 percent — should be pinned on neonicotinoids. Scientists are scrambling to figure that out — and to determine what else might behind the phenomenon, which has forced beekeepers across the country to triple what they charge for bee rentals over the past decade. Mites, midwestern droughts (possibly caused by climate change), various viral and fungal infestations and other possible causes are all being studied. And it’s a vicious cycle: declining bee populations mean more bees must be imported, which puts “travel stress” on the bees, causing further declines.

The consensus seems to be that CCD is the result of a combination of causes — but precisely what that combination is remains a mystery. There have been loud calls for stricter regulation of pesticides, especially neonicotinoids, in the United States, and particularly California, but uncertainty combined with heavy lobbying from the pesticide industry have so far kept legislation at bay.

Whatever the cause of CCD, though, it’s causing big trouble for the almond industry, and if the situation gets much worse, it could cause big trouble for California’s economy, and even for the nation’s trade balance.

Whatever the cause of CCD, though, it’s causing big trouble for the almond industry, and if the situation gets much worse, it could cause big trouble for California’s economy, and even for the nation’s trade balance. Almonds are the state’s biggest agricultural export — bigger than dairy and bigger than wine. Almonds take up 800,000 acres of California farmland, and represent between $4 billion and $5 billion in sales each year. Dying bees mean less pollination, and higher costs for growers.

Over the past 10 years, rents for each hive have gone from about $50 per season to between $150 and $200. About 1.5 million hives are needed to pollinate California’s almond orchards, meaning that the industry is paying at least $150 million more per year than it was a decade ago, and yet supply is still way down — by about 800,000 tons just this year.

And demand is way up, particularly in China, but also in India, the Middle East and other developing countries. As the standard of living in China continues to increase, so does the demand for nuts — particularly almonds. Chinese consumers, driven by the health benefits (both real and perceived) of nuts, are increasing their consumption by double digits every year, according to the International Nut and Dried Fruit Foundation, which also notes that demand in those countries is still well below that in developed nations, so prices are likely to continue to rise for the foreseeable future.

Health benefits are also increasing demand in developed countries. For instance, lots of people in the United States and Europe are turning away from dairy and opting for almond milk, almond butter and other products.

Meanwhile, prices are also rising for a product that is often, under normal circumstances, a substitute for almonds: pistachio nuts, of which Iran is the world’s biggest producer. Part of the problem there is the economic sanctions against that country over its nuclear program. If those sanctions stay in place, which seems likely at least in the short term, pistachios will not be able to absorb much of the demand for almonds, which will help keep almond prices high. Iran produces about half of the world’s pistachios.

But the most immediate problem is supply, and it all comes back to the bees. The problem is more than merely worrisome: it could be existential. A study by the University of New Hampshire released last month found that a major extinction of bee specious occurred about 65 million years ago — right around the same time the dinosaurs went extinct. That doesn’t mean that CCD is going to be the death of us all, but it’s a good reminder that when interconnected natural systems collapse, the effects hit everyone.