The Secret's in the Soil - Modern Farmer
Food & Drink

The Secret’s in the Soil 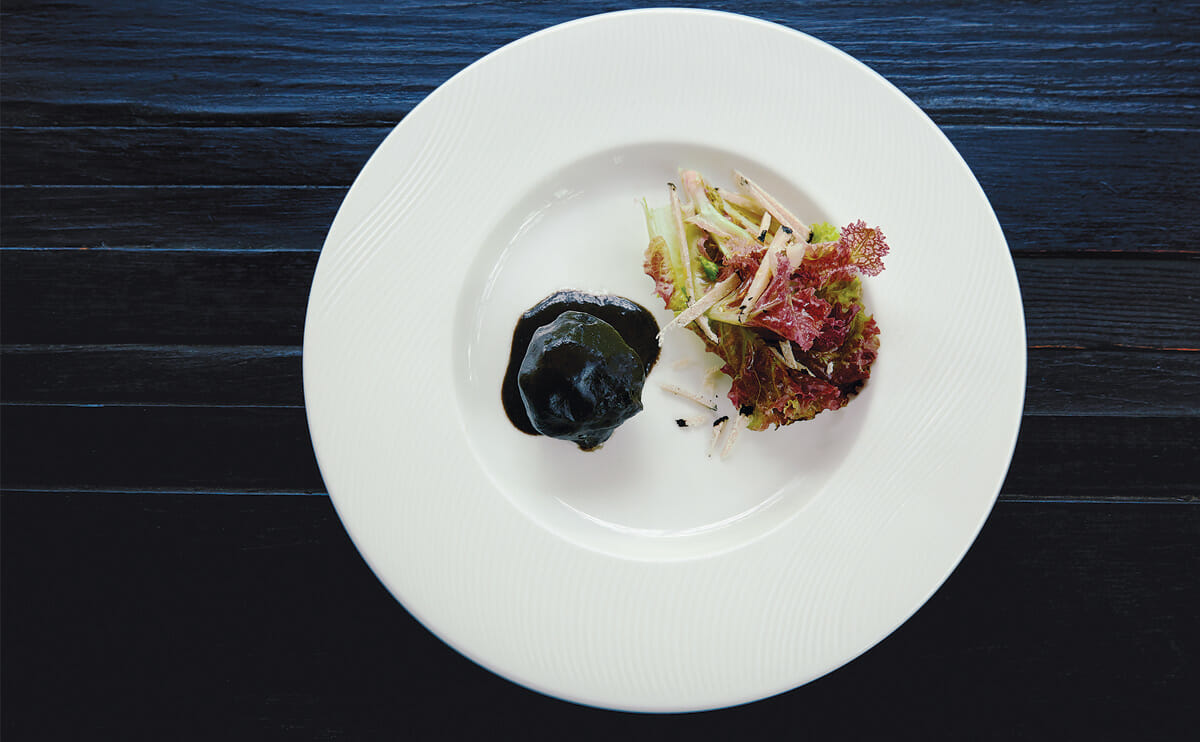 A heap of gritty soil is not a welcome sight on a dinner plate, except when you dine with Japan’s Toshio Tanabe. Tanabe serves dirt-based specialties alongside oysters, truffles and risotto at his Tokyo restaurant Ne Quittez Pas.

Tanabe, the world’s pioneer of “soil cuisine,” trained at Michelin-starred restaurants in Paris and believes that soil adds a healthy natural flavor to all kinds of dishes, from soups to sorbets. His customers clearly agree: Tables are booked at least three months in advance to sample his loamy delights. And what do they taste like? Tanabe’s concoctions have a textured and at times mudlike edge, although the dirt itself is surprisingly neutral to the tongue.

Toshio Tanabe: I’ve been eating soil for 25 years. At first I simply left it on unwashed vegetables freshly picked from the Earth. But a turning point was eight years ago when I was on a TV cooking program. I wanted to create something surprising in one bite – and made a soil-based dish. Since then, many people have visited my restaurant asking to try soil dishes. So earlier this year I launched my first soil menu.

MF: How would you describe the taste of soil?

TT: It is very hard to put into words. I would not say it tastes earthy, but actually like the Earth itself. Many people immediately use the word earthy to describe it, but that’s because of their image of soil. Either way, most people find it delicious and some say it has no taste at all.

MF: Where do you find your soil? And what type do you prefer to cook with?

TT: I buy 20 kilograms a month from Kanuma in Tochigi prefecture. I use black soil for most dishes and white soil – normally used for bonsai plants – for lighter food. The soil is taken from 10 miles underground and checked in a lab for impurities – pollution, contamination, lead. So it is already very safe when I buy it. Soil is a pure living thing, a collection of microorganisms. Anything bad about it, pollution or radiation contamination, is generally caused by humans.

MF: How do you prepare soil?

TT: First, I place it in the oven on a flat tray and heat to 200 Celsius [392 Fahrenheit] for five minutes, three times. The bacteria is killed at around 121 Celsius [250 Fahrenheit]. I then put it in a pot of water and boil it for 30 minutes. Next, I drain it to get rid of sand and particles, before straining it through a fine cheesecloth. I let it sit, and it separates into soil and water. I use the liquid for jellies and sauces.

MF: And how do you feel after eating it?

TT: I always feel good after eating it. Today our brains have been programmed to think that soil is dirty, but that’s not true. Soil is natural and nutritious.