The gardens and orchards at Monticello contain many of the 330 different crops and 170 fruit varieties that Jefferson is believed to have grown. In other words, he was a bit of a nut for crop diversity. 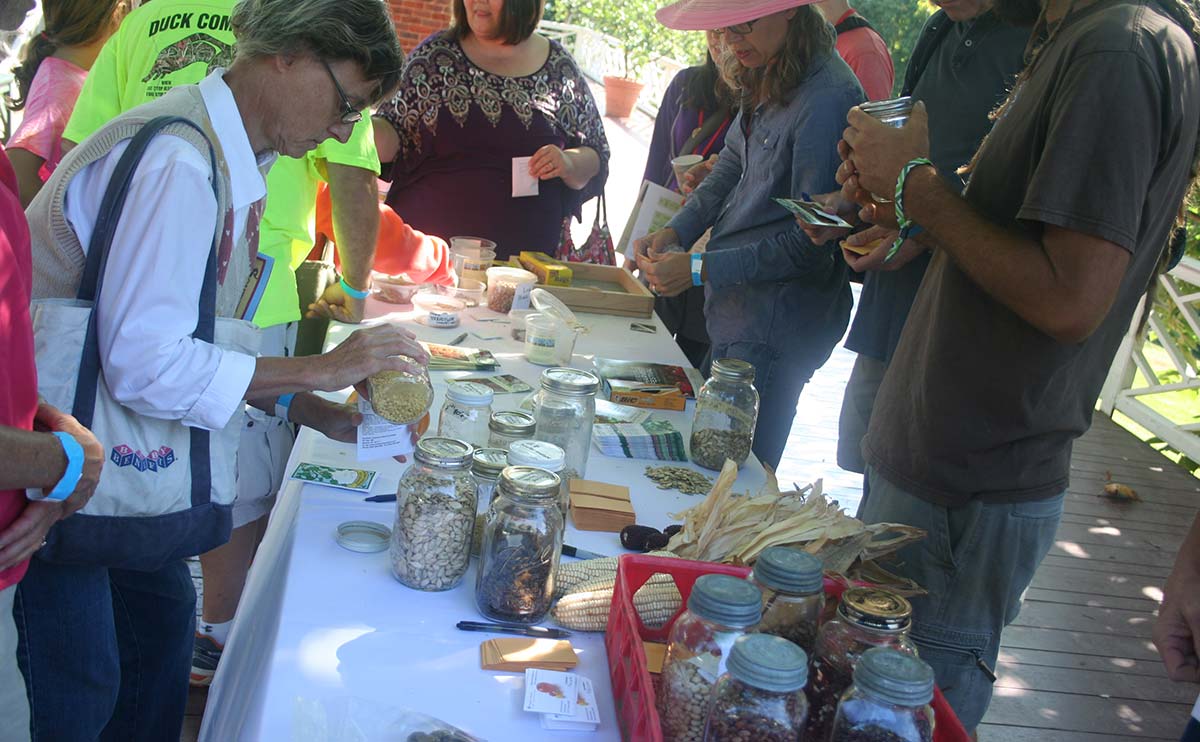 He sets aside a few to take home at the end of today’s eighth annual Heritage Harvest Festival at Monticello. The others crowded around the tables are likewise filling little pouches with samples of seed that Winn brought – a sampling of butter beans, green beans and field peas, plus an old heirloom corn known as hickory cane – and leaving their own for others to share. The name of this event – a “seed swap” – says it all. Bring a few, take a few, plant ’em next spring and see what you get: Jarrahdale pumpkins, black krim tomatoes, pink banana squash, fagiolino dolico beans, Sakata’s sweet melon, and on and on into heirloom infinity.

“It’s a lot more interesting than driving your little shopping cart through WalMart,” remarks Steve Bender, a gardening writer for Southern Living and festival keynote speaker who stops by the swap, on the appeal of seed-swapping and heirloom vegetable gardening. “It’s part of this big, broad [food] movement that’s started. And I don’t think there’s any stopping it.”

Seed-swappers trade seeds, tips and stories at the Heritage Harvest Festival, held on the grounds of Thomas Jefferson's Monticello estate.

It’s fitting, then, that this seed swap is occurring on the south terrace of Thomas Jefferson’s Monticello estate, just outside of Charlottesville, Va. In addition to all the things that made him perhaps our most beloved founding father, Jefferson was an accomplished and revolutionary gardener, billed by the organizers of this festival as “America’s First Foodie.”

“He’d be at the seed swap. He’d be tasting all the different varieties of tomatoes and be really interested in the cider-making,” says Peggy Cornett, curator of plants at Monticello.

Pausing beside the seed swap table, a man from Virginia Beach talks about the dangers of global monoculture, and the many benefits (taste, novelty, safety, adaptability) of robust and diverse heirloom crop agriculture, in which his tiny garden plays a fifth of an acre part. A woman from Gum Spring, down near Richmond, loves the seed-swap culture – open, cooperative and encouraging. 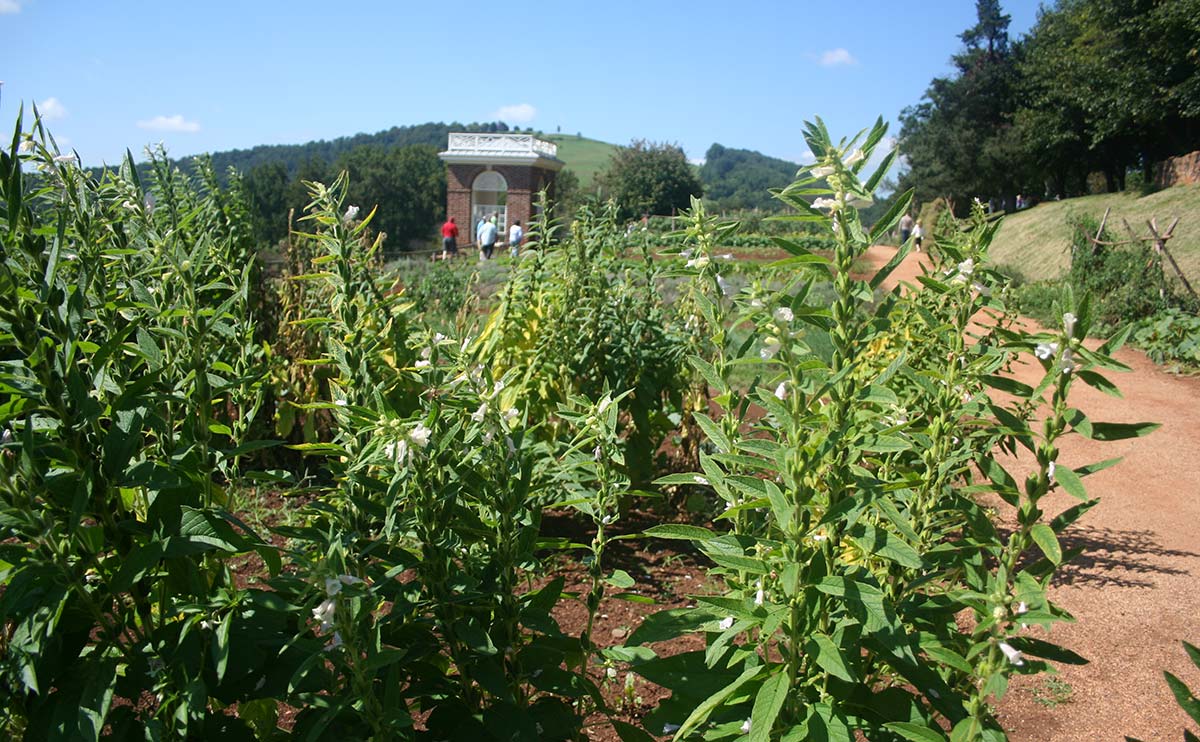 Sesame, in the foreground, was one of the crops Jefferson grew in this garden two centuries ago that's growing again at Monticello.

According to Cornett, Jefferson’s love for his gardens and the things he harvested from them anticipated the various culinary, community-building and food-security ideals of the modern food movement on display at Monticello. While he was president, Jefferson convened a blind taste-test pitting olive oil against sesame oil (sesame won) and sent his chefs out to buy directly from local farmers, even if it meant paying higher prices. Back at Monticello, he swapped seeds with his friends and organized contests among his neighbors to see who could bring the year’s earliest dish of English peas to the dinner table (to the winner went the privilege of hosting the entire neighborhood for a meal).

On a more fundamental, grander scale, Jefferson believed that farming was the noblest American calling. He devoted himself to adapting new kinds of plants to his native Virginia climate, Cornett continues, both for personal enjoyment and to further a goal of domestic food self-sufficiency.

One of the primary objectives of the Lewis and Clark expedition he commissioned during his presidency? Learning more about new food crops — ones that could perhaps be borrowed from the large blank spots on the maps of the time.

Today the gardens and orchards at Monticello contain many of the 330 different crops and 170 fruit varieties that Jefferson is believed to have grown. Beside an assortment of modern-day Virginia garden staples, there’s plenty of stranger stuff: artichokes, yucca, sea kale, sesame, Texas bird peppers and more.

“The renewal of gardening was a profound aspect in his life,” says Cornett. “Gardening permeated just about everything – his family, his relationships with his friends.”

The Heritage Festival’s other keynote speaker, Dr. Cary Fowler, also makes an appearance at the seed swap on the south terrace. Fowler, formerly the executive director of the Global Crop Diversity Trust, spent his professional life working on crop diversity from the big-picture, long-term food security standpoint, at the other end of the spectrum from the backyard gardeners swapping tiger melon seeds for golden ray tomatoes. With the Global Crop Diversity Trust, Fowler founded the Svalbard Global Seed Vault, where seeds from 783,000 crop varieties (100,000 each for wheat and rice alone) are kept in Norway as an “insurance policy” for the human food supply, should disaster befall other seed sources. 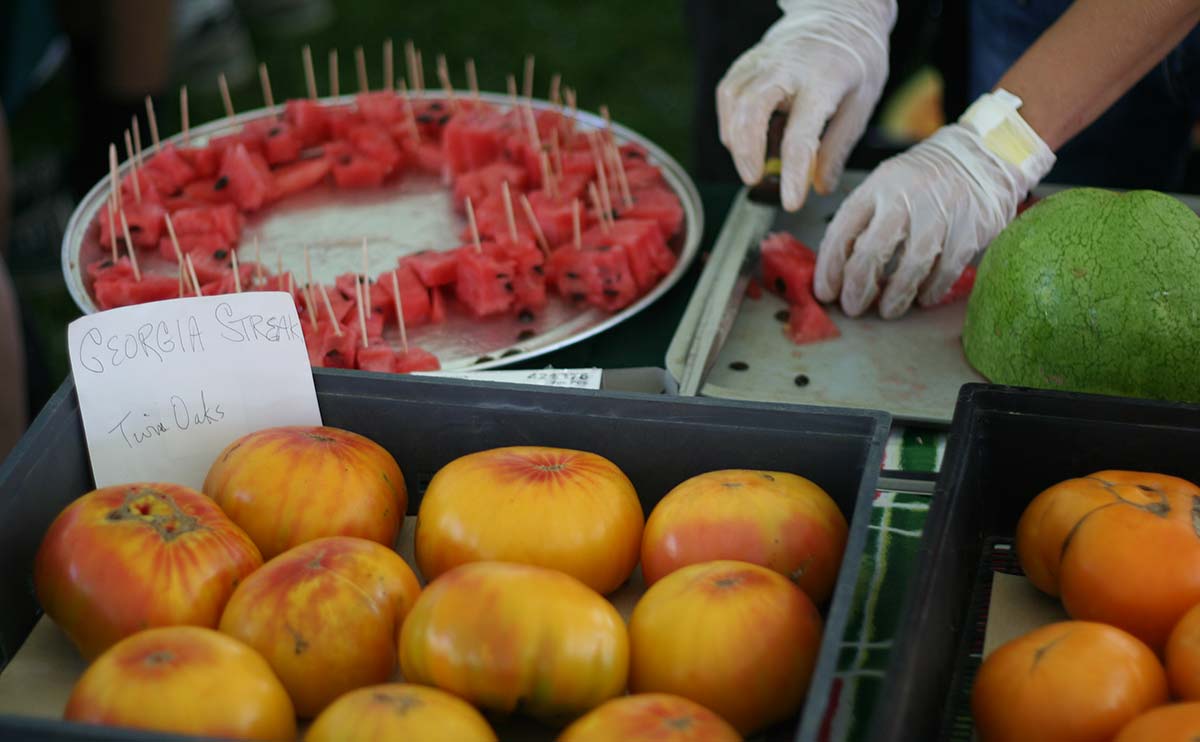 The tasting tent at Heritage Harvest Festival on Thomas Jefferson's lawn was a big draw.

Fowler traces his interest in crop diversity to childhood summers spent on his grandmother’s western Tennessee farm, where the tomatoes were simply better than the grocery store varieties. Decades ago, when he put together a little resource booklet to help people find heirloom seed sources, the notion was written off as nostalgic. “It’s lovely,” he says, of the fact that this subject is taken very seriously now by the crowds swapping seeds and tasting tomatoes on the Monticello lawn.

Unwittingly or not, these very people are doing the small-scale, decentralized work of crop preservation, development and improvement – a backyard movement that, in a sense, provides a complementary food supply insurance policy to the vaults beneath the Norwegian permafrost on Svalbard.