Even the people who make candy corn will tell you it's nowhere near a universally beloved treat. 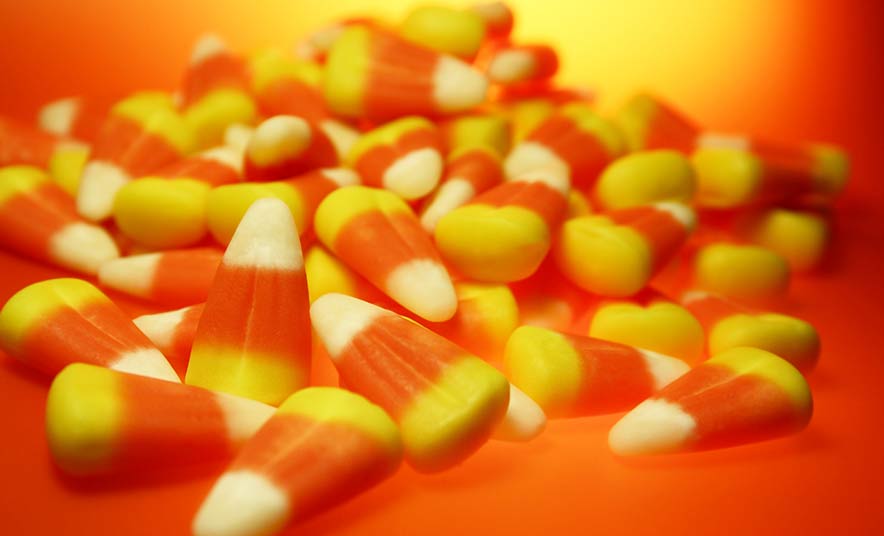 “People either love or hate candy corn,” says Tomi Holt, spokesperson for the Jelly Belly Candy Company, which has been making candy corn since 1898. “They have strong opinions and they’ll tell you about it.”

Not that that means people are above dressing up as sexy candy corn for Halloween for just $49, or doing battle with a creature called the Grand High Viscount of Candy Corn in the online role-playing game Guild Wars.

In case you thought this generation had a lock on rural nostalgia, candy corn is here to set you straight: The white, yellow and orange (arguably) corn-shaped confection has graced sweet shop shelves since the late 1800s.

In case you thought this generation had a lock on rural nostalgia, candy corn is here to set you straight: The white, yellow and orange (arguably) corn-shaped confection has graced sweet shop shelves since the late 1800s. Most agree that the inventor of candy corn was George Renninger, who ran the Wunderlee Candy Company in Philadelphia.

When candy corn started cropping up, “folks were leaving farms and entering the big city,” says Beth Kimmerle, candy historian and author of four books documenting the confectionary industry in the U.S. While on the phone with this reporter, she admitted she was eye-balling a bag of candy corn on her desk as we spoke. “I think the concept of a candy kernel of corn was appealing. It was seasonal. There was something festive about the shape of corn.”

Molding soft candy into shapes was a new technology that both candy makers and buyers were going bonkers for.

“What kinds of shapes are you going to make?,” asks Samira Kawash, who writes the blog Candy Professor and penned the book “Candy: A Century of Panic and Pleasure.” “Well, you can make them in any shape. You can do the shape of a banana or monkey. Agricultural themes were popular; they had acorns, shamrocks and leaves and corn.”

Early boxes of candy corn from the Herman Goelitz Company (which would later morph into Jelly Belly) featured proud roosters. A 1937 ad for the store B. Altman and Co. evoked the aura of the country general store, asking, “Do you remember the candy corn and the coal oil? Remember the little country store that was the hub of your universe, the social center and favorite memory of your childhood?” In 1971 the Henri Bendel department store tried to lend a whiff of urban sophistication to the genre, offering a fairly disgusting-sounding candy “succotash” consisting of orange-candy carrots, lime-candy lima beans, lemon-candy corn and mint-candy peas.

Although available year-round, candy corn is pretty much a guest-star of the Halloween/fall season now. Like Monsters Cereals and other time-pegged products, candy corn’s annual resurfacing has the odd effect of mimicking the seasons, as if it’s being grown and harvested.

“It’s really Willa Wonka,” says Kimmerle. “You start thinking about entering into that world where candy is growing on trees and there are rivers of chocolate.”

Of course, candy corn is not grown on trees. It is made in roiling vats and starts off as something that the candy industry unromantically calls “slurry“: a mixture of cornstarch, water and sugar. The slurry is mixed with a thick, dense fondant and then marshmallow is whipped into that.

What most people get wrong, Holt says, is how the candy is poured into the molds.

“When people visualize candy corn they visualize the mold as laying down,” says Holt. “They think it’s a chevron shape pointing down when in fact it’s more like an arrow pointing down. First the white goes in to the bottom of the tip, then the orange, then the yellow. So its three colors are deposited one after the other.”

Both Kimmerle and Kawash said the tricolor quality of candy corn, an incredibly unusual feature in sweets when it debuted, captivated early customers. Kimmerle declared that for a child in the late 1800s, the site of a jar of the stuff must have been “stunning.”

Back in the day, making that stunning corn required a lot of sweat.

“Runners” would walk backward down the conveyor belt as trays moved forward, using long-handled buckets with small holes in the bottom called “streamers.” The first would deposit the white, the second the orange, and so forth.

“This took a lot of time and skill,” says Holt. “You’ve got hot, steaming candy in buckets that are probably 200 or more pounds.”

‘When you got to Halloween candy corn was like the candy everyone was hating on. I really like candy corn, so that always made me kind of sad. ‘

For all that sweat and slurry you’d think candy corn would earn more respect, but that hasn’t always been the case.

“When I first started researching candy corn, it was universally reviled,” says Kawash. “When you got to Halloween it was like the candy everyone was hating on. I really like candy corn, so that always made me kind of sad. ”

But the tide may be turning.

“I’ve been astonished to notice this year and last year, too, that candy corn is everywhere,” says Kawash, “And not just candy corn but all these different variations on it.”

Kimmerle, who is also a booster for candy corn, says that the baking and crafting crowd can’t get enough of the stuff.

“I was at an upscale bakery recently and saw cupcakes decorated with candy corn to make it look like turkey feathers,” she says.

Kawash chalks the candy corn comeback up to nostalgia, because right now people are “going back to the past for the comfort and fun of older-time things.”

Of course, a better rep has its downside, as Kawash found out at a party recently.

ABC’s investment reality show “Shark Tank” got a visit from some goats recently. Mike and Matt wanted to start up a Rent-A-Goat business for customers who want to use goats for landscaping. After an initial round of “awws” when the goats were trotted out, the investors turned their noses up at the opportunity. One potential investor declared he could just start his own goat farm and do it himself, to which goat herder Mike replied, “I bet you can’t, I’d be buying your equipment in three months. And I’d be giving you less than half what you paid for it.”

Old MacDonald showed up in a GEICO ad, in bib overalls, no less.