Diary of a State Fair Goat

This is the state fair diary of Deer Girl, a Boer goat, as told to journalist Andrew Jenner. 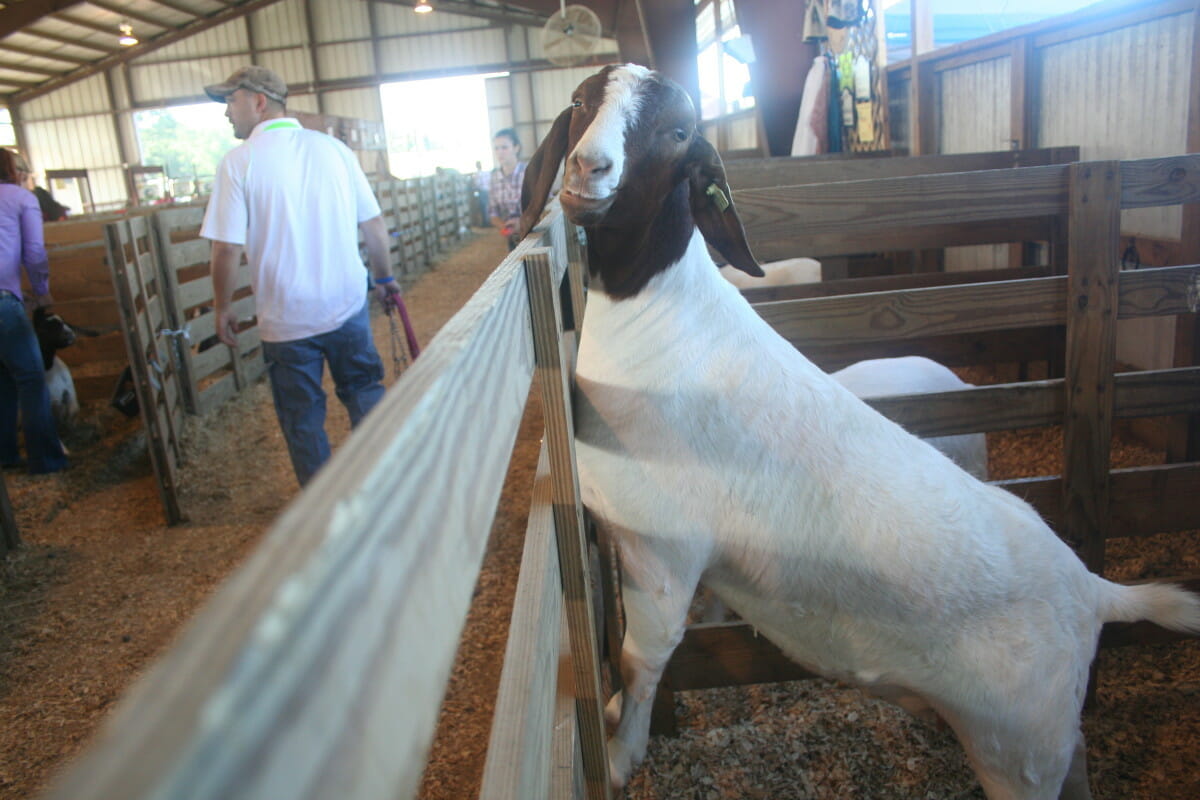 This is the state fair diary of Deer Girl, a Boer goat, as told to journalist Andrew Jenner.

Greetings from the sheep & goat barn at the Rockingham County Fairgrounds in Harrisonburg, VA, where I arrived last Sunday to spend a week on display at the county fair. It feels sort of like a late-summer vacation, I suppose, although that implies that life back home on the farm in Broadway (about like 20 miles or so from here) is something that I could use a break from. Au contraire, life as goat on Brad and Jill Showalter’s Crazy S Farms is very, very good.

I get my two square meals a day ”“ “sweet feed,” with corn and molasses and soybeans and other goodies, plus a bit of hay. In between, I spend all day out on the pasture where there’s plenty of stuff to nibble, and where the Showalters’ kids come out to play out with us. Brad often remarks that he wishes his life was as good as mine. Jill laughs at him when he says this.

About my name, Deer Girl: Dillon, their four-year-old son picked it, so thanks for your understanding. He also named Bottle Baby Doll, who’s in the stall to my right at the fair this year. Delilah, who’s on the other side of me, got her name from someone else who bred her.

Our stalls are spacious, and the Showalters are keeping the fragrant wood-shaving bedding nice and tidy. There are about 35 of us goats at Crazy S Farms; nine got to come to the fair. All of us from Crazy S here at the fair are registered Boers, meaning we tend to be big and heavy-boned, bred for meat rather than milk.

What else to say? I am a year-and-a-half old with a traditional Boer coat, a white body with a red head. The numbers in the yellow scrapie tag in my ear correlate to my registry paperwork, which would tell you, if you looked them up, that I was born on another farm in Rockingham County.

My only scheduled commitment this week will be on Thursday, when I’ll appear in the Open Goat Show. Otherwise, I’m just here to look pretty and be an ambassador for livestock and agriculture to the tens of thousands of visitors who will come to the fair. That means an unusual amount of TLC. Every day, I head outside to the grooming station to get shampooed with special goat shampoo and blow-dried with a special goat blow-dryer.

Not a lot to report today. It’s very cool and comfortable ”“ a welcome break from a standard-issue Virginia summer. There are about 150 pens in this barn, filled with both goats and sheep, sometimes two to a pen. The sheep are starting to wear on my nerves a bit with their incessant bah-ing, which they do constantly and for no apparent reason.

A few family groups straggle by in mindless fashion, ambling without paying much attention to us animals. The children in these groups, theoretically out for an evening of family fun at the fair, are often a little restless and crabby, and the adults generally seem a little frazzled. Crowds are still sparse, but this is early. There seems to be excitement about a guy named Alan Jackson who’s coming to the fair tomorrow night, as well as considerable anticipation of something called an Old Crow Medicine Show happening on Thursday. The crowds will grow.

Oh, and P.S. ”“ in the stall directly across the aisle from me, there is a little tiny black goat with white polka-dots (technically, a “spotted” or “dappled” coat) who is really dominating fair-goer attention in the sheep and goat barn. They appear to think this little guy is very cute. He’s a little too cute, I’d say.

Things are picking up. This Alan Jackson character has arrived with a motor coach and two large semis. The grandstand is hopping.

There’s more traffic now in my barn, too. A boy wearing a Confederate flag hat just wandered by but paid me no mind. Neither did the old guy who looked to be equal parts Santa Claus and Hell’s Angel. A little girl broke away from her mother and ”“ unlike pretty much everyone else ”“ ignored the cute little goat across the way and comes straight for me. Me!

I played it cool, keeping very still as she reached out, tentatively, to touch my horn. She did it a second time, more confident, and stood up smiling.

I’ve determined that the oh-so-cute attention-getter across from me has a wonderful, oh-so-cute name: Jim Tom. He is from Mount Jackson, which is not even in Rockingham County, and I am about sick of the heartthrob effect he continues to have on general public.

Oh, and P.S. ”“ word has reached the goat barn that somebody by the name of Tim Kaine may be here to watch the goat show tomorrow. He seems to be of some importance, and is in something called the Senate. I’m wondering if he is also involved in this Old Crow Medicine Show thing that’s also tomorrow. Maybe Alan Jackson is in the Senate as well. No one’s really explained much to me about any of this, and in any case, it’s all a distraction. The Open Goat show is in the morning, and I need to get some rest.

I’ll spare you a detailed play-by-play of the Open Goat show. It was a highly stressful morning. There was total chaos in the goat barn ”“ people running back and forth, parents trying to get their kids and their kids’ goats in line at the right time, dozens of heats in rapid-fire succession, etc. & etc. Brad and Jill showed a bunch of us goats this morning, and they were scrambling just like everybody else.

My shot at Open Goat show stardom came and went in the blink of an eye. I went out in a group of eight goats, paraded around the ring, and then the judge lined us all up in order. She told the crowd that I’ve “got a lot of lint” to my body ”“ a compliment, I believe ”“ but “give up a little elongatedness” in my neck ”“ not a compliment, it seems.

I finished fourth out of eight and that was that. Perhaps the judge noticed me pee in the ring as we marched around (couldn’t hold it) and docked some points.

I didn’t see Sen. Kaine or Sen. Jackson at my show; perhaps they were sound-checking for that Old Crow thing that I guess there a part of. I’m relieved no VIPs saw me, though. It was a disappointing morning, to be sure. Delilah (my Crazy S Farms buddy the next pen over) did well though: reserve grand champion in the full-blooded doe division.

The Medicine Show is about to begin, and there’s steady general-public traffic again in the livestock barns. Another little girl stops by my pen. These little girls are my biggest fans. She remarks to her mother that I’m “a big guy,” and since she’s too young to be expected to know a wether from a buck from a doe, I’ll let it slide.

It is a cool, clear Virginia evening, and when I prop myself up on the wooden boards along the front of my stall, I can peek through the barn, on across the valley to the rumpled Blue Ridge Mountains in the distance. I’ll admit a brief, vicious thrill at the fact that oh-so-cute Jim Tom is too little and short to enjoy this same view. It’s been a long week at the county fair, and soon I’ll be back home at Crazy S, living the kind of pampered life that makes humans jealous, but for now, this is a moment to savor.