The Short, Intense Career of a Junior Livestock Showman

It all comes down to this. The start of the market lamb show at the Rockingham County Fair in Virginia is just moments away, and Kaylyn Beach, 15, is in the pen with her lambs, making final primps and adjustments before entering the show ring. 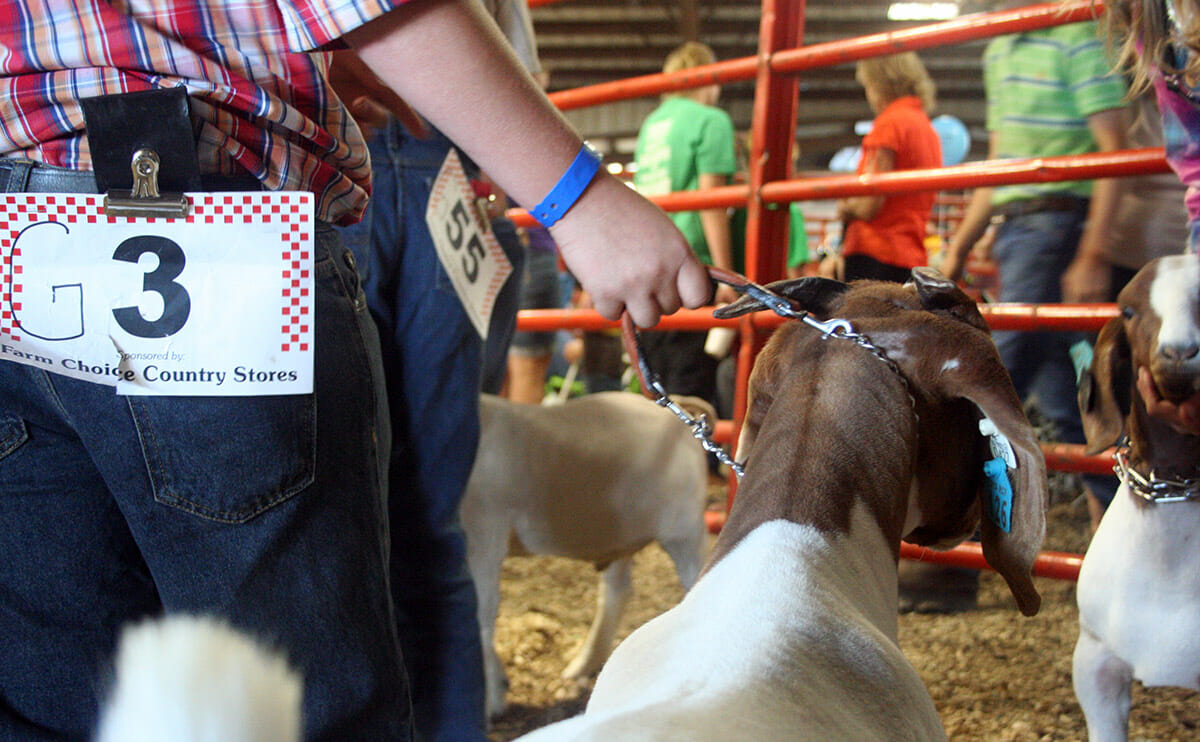 Work toward this moment began months ago. Beach was there when her lambs were born last winter, and ever since, she’s been there morning and night, feeding them carefully measured rations calibrated for the ideal market lamb physique. While her friends were off doing the usual summertime things, Beach was on the farm, putting in time with her lambs.

Livestock showmanship, even at the relatively provincial county fair level, is no trifling matter, and competition at the state and national shows can get truly intense. These animals aren’t simply yanked out of pastures or barns and paraded around the show ring for kicks. Champion livestock are highly trained athletes in top physical shape, closely attuned to the commands of a champion showman after many, many hours of repetition and practice.

“It’s no different than running your plays on the football field. You’ve got to do it every day,” says John Fleishman, who has shown Hereford cattle at this fair for the past 30 years. “Practice, practice, practice.”

It’s the nuances of showmanship that can mean the difference between a championship and a sad, white ‘thanks-for-playing’ ribbon.

In Beach’s case, that meant an hour of training each morning and each evening for her lambs. Some days, they’d use the chariot, a wheeled platform towed behind a farm vehicle (the sheep prop their front legs on the platform and follow behind on their hind legs). Other times, Beach hitched her lambs to a powered carousel and they’d just walk laps, over and over. Still other times, they’d work in the jumping pen, repeatedly hurdling obstacles built from cinder blocks and PVC pipes.

“It’s part of that American thing of being competitive,” says John Sponaugle, another veteran showman at the Rockingham County fair (in his case, 30-plus years of sheep), chuckling about the extremes of time, money and energy that people like him pour into livestock shows.

As with other American competitive endeavors, they start young in livestock showing. Parents and grandparents often show newer generations the ropes. Sponaugle’s children were successful showmen in their days, and this year, his four-year-old grandson showed a lamb for the first time.

Multi-generational involvement plays several important functions. Older family members teach young ones the tricks of the trade – e.g., how to use your knee to get your lamb to “brace,” or tense its muscles, when the judge makes a pass. They teach kids how to care for the animals, how to evaluate them (to the uninformed, it’s essentially impossible to understand different animals’ desirable traits, like “posty” legs in cattle or goats with “pointy” chests and “nice, linty” coats that “carry their weight well”) and the nuances of showmanship that can mean the difference between a championship and a sad, white “thanks-for-playing” ribbon.

Family involvement also comes into play in the purely logistical sense: animals need to be fed and exercised every single day. Kids make sacrifices, large ones, to win livestock shows, but kids are still kids. Vacations and other activities complicate schedules, and having show-savvy siblings, parents or grandparents around to feed and exercise animals in a pinch is a key to many a champion’s success.

Spend any time around the show barns, and you’ll begin hearing repeated statements about the way showmanship sends positive ripples out into other areas of life. Long hours and sacrifice now in the name of some future gain teach discipline and responsibility. Caring for an animal doubles as a crash-course in applied money management. These sorts of things are why Kaylyn Beach shows lambs in the first place, why she skips trips to the movies with friends to fit in another session jumping her lambs over cinder block hurdles.

The more serious showmen will look beyond the county fair to the state and national shows. Traveling to these ratchets up the time and expense commitment of showmanship yet again. This summer, Fleishman and his family drove to Kansas City for the Junior National Hereford Expo, where John’s son, Daniel, 22, competed. They’ve spent family vacations like this for years: Tulsa, Louisville, Grand Island, Nebraska. Family bonding on these cross-country trips, says Daniel, is another perk, another justification for the intense preparation and training that gets you into the Junior National Hereford Expo in the first place.

The career arc of a livestock showman also parallels other sports in that, for nearly everyone, truly competitive days end when people “age out” of competition at the youth level, typically at age 21 or 22. Afterwards, there are still open shows, but the competitive vibe – especially at the local level – is a bit more modest. Major championships, international fame and lucrative purses are not in question. They do it because it’s fun to show the best animal that they can, to engage in a little healthy competition with the other people on the circuit. (Not unlike, say, marathons – a habit lots of people invest lots of time and money into for purely recreational reasons.)

Though there are professional showmen who show enormously expensive animals bought and bred solely for competition, these opportunities are very, very few. When most people age out of the intensely competitive junior circuit, they might get into lower-stakes open showing. And then, as times rolls on, there’s always a vicarious thrill to pursue by helping out a younger siblings, a niece or nephew, and someday, before long, kids and grandkids of their own.

Over in the cattle barn, the interview with Daniel Fleishman gets cut short by the impending start of the Hereford show. He’s too old for the youth show at the county fair now, but his 13-year-old cousin, Abigail, is entering the prime of her career. It’s time for him to help her lead the cow to the ring, where he’ll cheer her on from just outside the fence.