Coyotes kill over 135,000 sheep a year, and are found in every state in the continental U.S. Can they be contained? 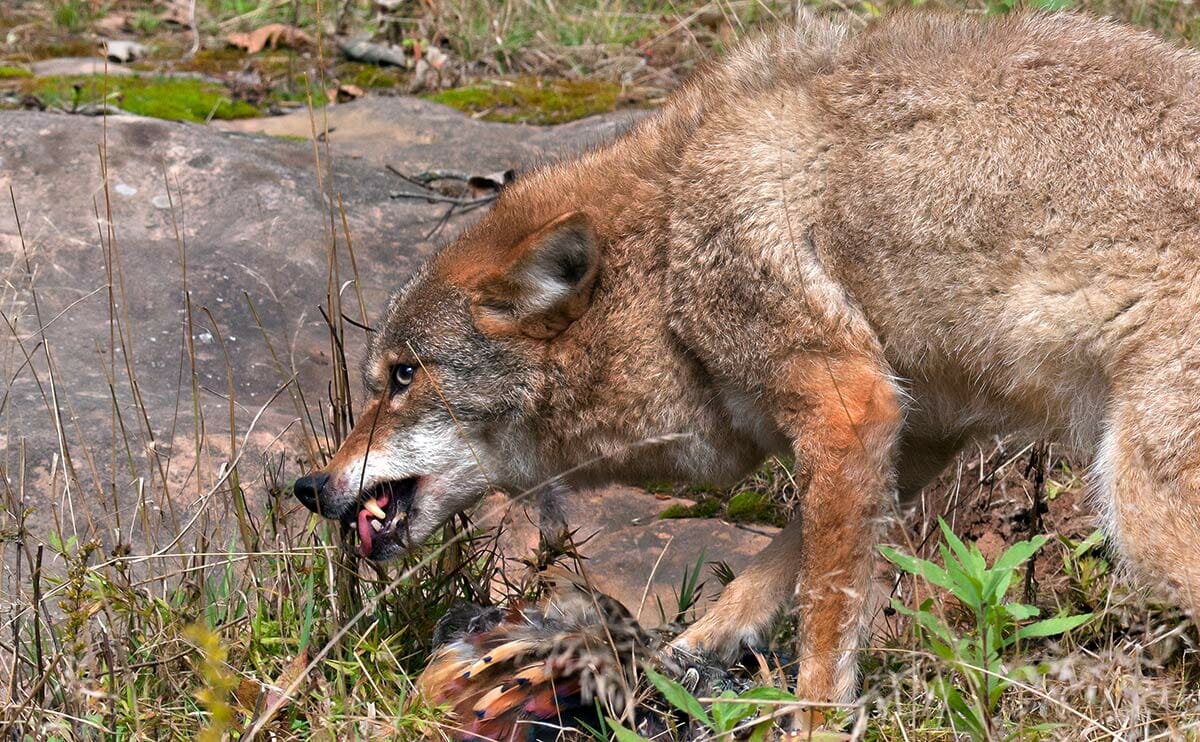 Somewhere around 20 years ago, Joe Harper came across the carcass of one of his lambs with four neat fang marks around its throat. Bears had always been an occasional menace to Harper’s flock, pastured in the mountains of eastern West Virginia, but this looked nothing like a bear kill.

It was the work of a coyote. Generally only found west of the Mississippi prior to European settlement of North America, coyotes began spreading east early in the 20th century to fill the ecological niche created by the extermination of gray and red wolves in the eastern U.S. By the 1980s, populations were established in in every state in U.S. except Hawaii. (A coyote was even spotted in New York City’s Central Park.)

By the 1980s, populations were established in in every state in the U.S. except Hawaii. (A coyote was even spotted in New York City’s Central Park.)

The foremost predators of livestock in the country, coyotes killed more than 135,000 sheep in 2005, according to the USDA’s National Agricultural Statistics Service. That puts them right atop the list of any sheep producer’s problems, alongside ”“ or above, depending who you talk to ”“ animal health and market volatility.

“The coyote problem has put an awful lot of sheep producers out of business,” says Harper, who has raised sheep his whole life and is a former board member on the American Lamb Board.

Since discovering that first coyote kill, Harper guesses he’s lost somewhere around 1,000 sheep to coyote predation. Along the way, he and his fellow sheep farmers have found themselves locked in something of an arms race with the highly intelligent predators, who quickly adapt to various fencing techniques, guard animals (dogs, llamas and donkeys commonly serve in this capacity) and other countermeasures used to protect grazing sheep.

When coyotes first showed up on his farm in Virginia’s Shenandoah Valley, Leo Tammi Â­”“ currently the treasurer of the American Lamb Board ”“ found he could keep them at bay simply by walking his dog around his pasture, laying down a scent barrier. Now, he says, coyotes in the area are known to barge right on through a dog’s scent barrier, kill the dog and move on to the sheep flock.

Tammi says he lost 40 lambs last fall alone; he and his son, Aaron, find that their best method of response now is setting traps and snares to get rid of specific problem coyotes that begin preying on their sheep.

“They’re here to stay,” concedes Tammi. “We have to learn to live with them.”

In addition to beefed-up fences, guard animals and other measures taken by farmers, a variety of publicly funded control programs have followed the coyote’s spread across the country. The South Dakota Department of Game, Fish and Parks, for example, employs 27 full-time predator control staff who spend a great deal of their time and attention on coyotes. In fiscal year 2012, state employees removed (i.e., killed) more than 4,600 of them in South Dakota; the combined state and federal spending on predator control the state tops $1 million.

Given the coyotes’ intelligence, adaptability and fast reproductive rates, managing them “is a complex problem,” notes Keith Fisk, who oversees South Dakota’s state-funded predator control program. Using traps, calls, poison and other techniques, his staff is engaged in something like a permanent game of Whack-a-Mole, targeting individual, livestock-eating coyotes in response to farmers’ complaints.

Some states have gone as far as creating public bounty programs to incentivize coyote hunting as a way to numbers in check. After the Virginia legislature passed a 1999 bill allowing counties to fund local coyote bounty programs, more than a dozen of them began paying bounties, typically ranging from $50 to $75, for each coyote hunters turned in.

Criticisms of this approach, however, abound. Pointing to the coyote’s rapid reproductive rates, biologists argue that attracting a few extra hunters to the cause simply won’t scratch the surface when it comes keeping populations in check.

Another argument leveled against coyote bounties involves the animals’ surprising intelligence and ”“ to put it in more colloquial terms ”“ wiliness. If a hunter takes a shot at a coyote but misses, good luck trying a second time, says Aaron Tammi, who has long experience hunting them around his farm and elsewhere. By this line of thinking, bounty programs that encourage inexperienced hunters to bumble around after coyotes simply gives the area’s entire coyote population advanced degrees in stealth tactics. (In response to such criticisms, and the general climate of public budget-cutting over the past several years, a growing number of Virginia counties that set up bounty programs have started canceling them.)

Nevertheless, a new bounty program was launched last year in Utah, offering $50 for each documented coyote kill within the state. (In this instance, however, the intended beneficiaries aren’t the state’s farmers ”“ it’s the state’s mule deer, who are also feeling the effects of coyote predation). Over the first year of the program, the state paid out bounties on more than 7,100 coyotes. Despite the massive number of bounties, John Shivik, the mammal program coordinator for the Utah Division of Wildlife Resources, says the jury is still out on the program’s effectiveness: “It’s just really hard to wipe out coyotes in an area.” That being the case, the hope in Utah is that more hunting in particular areas at particular times will do something to alleviate coyote pressure on the state’s mule deer.

Ironically, farmers are beginning to find that one of the best defenses against coyotes may be other coyotes.

From sea to shining sea, coyotes now represent a problem for American sheep farmers that requires continual management. (From an ecological standpoint, it should be noted, the arrival of the coyote in parts of the country where top predators had been exterminated isn’t necessarily viewed as “a problem.”) The services of guard dogs, guard donkeys and guard llamas will remain in demand, the wildlife control officers will keep their fingers in the dikes, and coyotes will continue to whittle away at sheep herds.

Ironically, then, producers like Tammi and Harper are beginning to find that one of the best defenses against coyotes may be other coyotes. Not all of them have a taste for lamb, and they are, generally, territorial animals. Savvy sheep producers who have coyotes living on or around their farms but aren’t losing any animals would do well to welcome them to the neighborhood, say the two men, both with a lifetime of experience in the industry.

A rabbit-eating coyote that keeps sheep-eating coyotes away could become an important ally. An enemy of an enemy is a friend. Now that sheep farmers have no choice but to share their farms with coyotes, this sort of “guard coyote” Â­”“ as long as they don’t change their minds about sheep ”“ might represent a sort of uneasy truce.