A CSA for Seafood

Cape Anne Fresh Catch, the country's largest community supported fishery, does essentially the same thing as your typical CSA, but with fish. 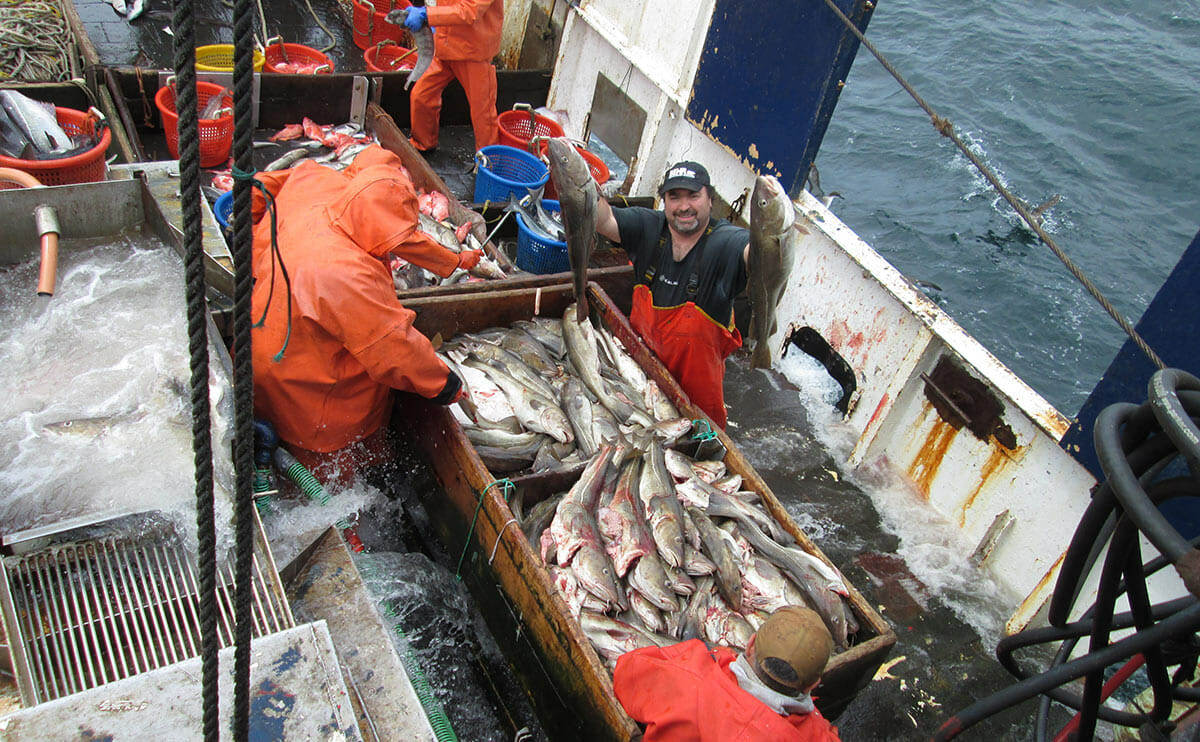 You may be familiar with the concept of community supported agriculture, or a CSA. A box of farm fresh produce, delivered to shareholders who pay a subscription fee to the grower, provides a lifeline for thousands of farmers around the world.

Cape Ann Fresh Catch, the country’s largest community supported fishery, does essentially the same thing, but with fish. The Gloucester, Massachusetts-based organization walks a tightrope, with environmental concerns associated with commercial fishing one side and the desire to maintain the historic harbortown’s 400-year-old industry on the other. As they see it, sustainability, both environmental and economic, is in variety — specifically in catching and eating a diverse array of fish.

It’s a concept Cape Ann Fresh Catch’s parent organization, the Gloucester Fishermen’s Wives Association, has long advocated for. Already aware of the problems caused by commercial overfishing of single species like cod or haddock in the Gulf of Maine, the Wives encouraged and instructed home cooks in Gloucester on how to prepare dishes with underutilized species in a cookbook released in 1976. That cookbook, in some ways, laid the groundwork for the Cape Ann Fresh Catch.

When the Wives were approached by the Northwest Atlantic Marine Alliance in 2009 about starting a community supported fishery in Gloucester, the concept resonated. NAMA had hoped to encourage independent operations to diversify their catch. Based on previous success working with the fishing community of Port Clyde, Maine, they knew that borrowing concepts from community supported agriculture could help to keep more small and mid-size boats in business, while helping the overfished Eastern seaboard recover. With the help of NAMA, the Wives, and Massachusetts Institute of Technology’s Sea Grant, Cape Ann Fresh Catch was born.

“We’ve been stewards of the ocean for 43 years,” says Wives president Angela Sanfilippo. “We are blessed with fishing grounds that produce all these varieties of fish. It costs the fishermen the same amount of money to catch haddock as it does to catch whiting, so why not?”

The operating costs may be the same, but the price a boat gets for its catch fluctuates depending on the fish. Haddock and cod are considerably more desirable and therefore can demand a higher price.

Cape Ann Fresh Catch’s members pay upfront for weekly deliveries of shares of fish, which can include monkfish and hake (among others) in addition to cod and haddock.

But cod and haddock are also considered overfished. This year alone, federal mandates cut the amount of cod allowed to be taken out of the ocean by commercial boats by 70 percent. Such stringent catch limits, while protecting certain species of fish, can also have devastating economic effects, especially on small and mid-size independent fishing operations. The financial costs of heading out to sea is the same no matter how many or what type of fish a boat can bring back to shore. For many independent fishermen, the limited catch isn’t enough to outweigh the costs.

“We believe that diversified fishing operations are better ecologically, but there’s very little fairness in price outside of species that are very popular,” says NAMA’s coordinating director, Niaz Dorry. “The fishermen say, ‘Well the processor is telling me all they want is cod and haddock and the processing facility is only equipped for cod and haddock and you want me to go fish for shrimp.’ How do you do that and not lose money?”

The answer was in a subscription model made popular by community supported agriculture. Cape Ann Fresh Catch’s members pay upfront for weekly deliveries of shares of fish, which can include monkfish and hake (among others) in addition to cod and haddock. Whole fish is cheapest at $132 for 4 to 6 pounds over six weeks. Initially, whole fish was the only option, but member feedback led Cape Ann Fresh Catch to partner with Turner’s Seafood to process some of the fish into fillets. Now, for $156, members can receive two pounds of fillets weekly for six weeks or for $144, they can alternate weeks between whole fish and fillets. The type of fish depends on what the ocean offers on a particular day. The constant is ultra-fresh fish, something Sanfilippo says can be hard to come by even in Gloucester.

“Here we are in a fishing community on the North Shore, and some people have no clue what a good piece of fresh fish looks like or tastes like,” she says.

“Values that have gathered steam in land agriculture — who raised my chicken? how was this broccoli grown? — these transfer to the fishing industry as well.”

In addition to being notified which particular boat (or boats) their fish came from, members also receive recipes and suggestions for how to use the fish they might not otherwise get to work with. In the same way CSA members across the country became familiar with garlic scapes in recent years, CSF members have gotten acquainted with species such as Atlantic Pollock, once considered bycatch and a throwaway fish.

Director Donna Marshall says Cape Ann Fresh Catch has anywhere between 600 and 1,000 members depending on the time of year and delivers to more than 20 sites across the Boston area, including restaurants and farmers markets, sourcing from several small boats as well as a few larger boats.

There are now around 25 CSFs on both the East and West Coasts. The types of fish and methods for delivering vary, but most CSFs are united by three principals: sustainability for the environment, a fair price for the people who provide the fish and a good product to the community.

Dorry from NAMA says that above all CSFs should start a conversation: “Values that have gathered steam in land agriculture — who raised my chicken? how was this broccoli grown? — these transfer to the fishing industry as well.”