With blue heads, bright red wattles and spectacular tiers of bronze, black and beige feathers, wild turkeys can be exceptionally beautiful creatures. Benjamin Franklin himself, in a letter to his daughter in 1784, wrote that the turkey, compared to the bald eagle, was “a much more respectable Bird.” While they once roamed most of the […] 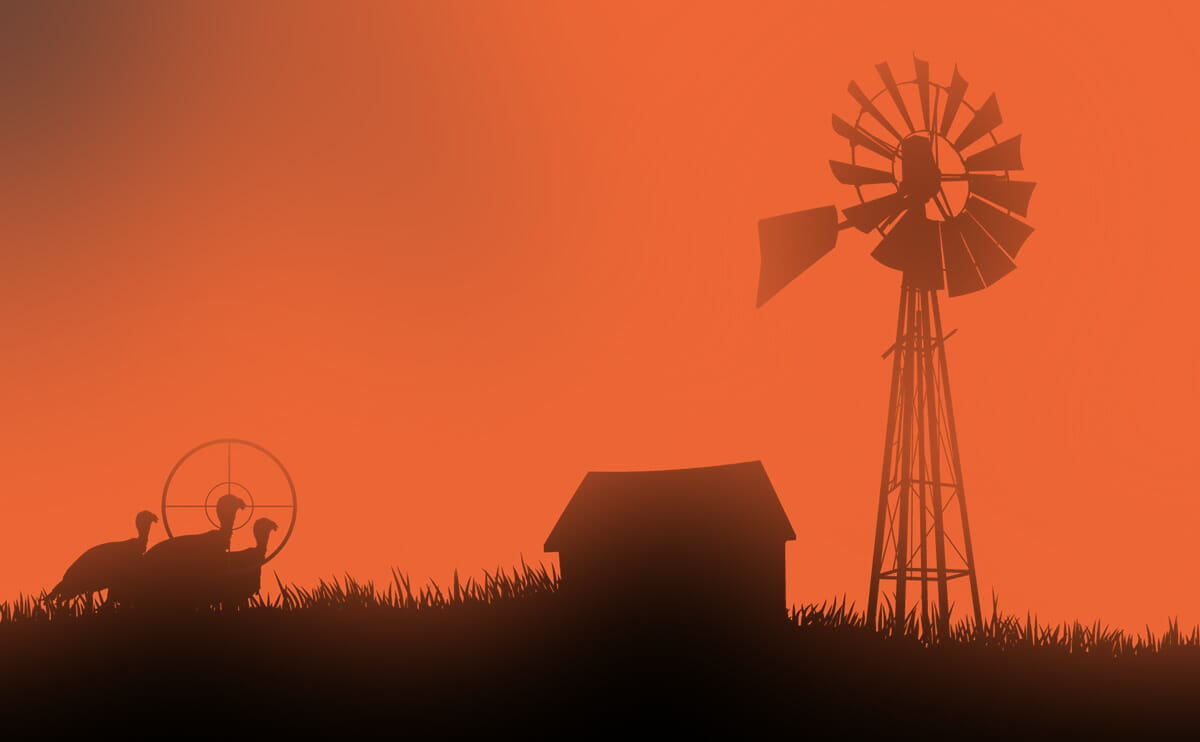 With blue heads, bright red wattles and spectacular tiers of bronze, black and beige feathers, wild turkeys can be exceptionally beautiful creatures. Benjamin Franklin himself, in a letter to his daughter in 1784, wrote that the turkey, compared to the bald eagle, was “a much more respectable Bird.”

While they once roamed most of the United States and Canada, the birds were essentially wiped out by the early 1900s, as hungry settlers hunted the birds for dinner and land was cleared to make way for agricultural land and cities. Through reintroduction programs started in the 1940s, mostly by hunters, their numbers began to climb again, setting the stage for what was perhaps an inevitable showdown: farmers versus wild turkeys.

Depending on who you ask, the birds are either marauding, wily animals that ruin crops and contaminate cattle feed as they roam across farmland in huge packs. Or they’re gorgeous, sensitive birds that are a delight to hunt and unfairly blamed for crop damage inflicted by deer and raccoons. Everyone does agree on one thing: numbers of wild turkeys are increasing in many parts of North America, from Ontario, where they’ve gobbled grapes off entire vineyards, to Staten Island, NY. And it’s making farmers nervous.

Depending on who you ask, the birds are either marauding, wily animals that ruin crops and contaminate cattle feed as they roam across farmland in huge packs. Or they’re gorgeous, sensitive birds that are a delight to hunt and unfairly blamed for crop damage inflicted by deer and raccoons.

“The turkeys are doing damage, there’s no doubt about that,” says Maine Farm Bureau executive secretary Jon Olson, who recently testified in favor of a bill expanding that state’s turkey hunt. To kickstart a hunting season on the birds in the late 1970s, Maine’s inland fisheries and wildlife department trapped 41 wild turkeys in Vermont and set them loose in two counties. Their population has since boomed to between 50,000 and 60,000.

Olson says he’s heard myriad horror stories from farmers, including a dairy farmer whose plastic-wrapped hay rotted after being pecked, a vegetable farmer who saw turkeys eat all the emerging shoots of his oat field, and one potato grower who saw wild turkeys dig up and destroy a field of freshly planted potato seed.

The most popular apple in his state, according to Olson, is the honeycrisp. Unfortunately, he adds, it’s also the turkeys’ favorite. “One wild turkey will fly up to the tree and shake it, and others will come up and eat the fallen apples.”

Giving testimony at the same hearing, organic farmer and Democratic politician Craig Hickman said he used to like the birds, but changed his mind once they went after his collard greens. “Then I had enough,” he said to the Bangor Daily News. “Because if you know me, you know I like collard greens.”

While that particular piece of legislation failed, inland fisheries and wildlife biologist and go-to Maine turkey expert Brad Allen (his friends call him “Big Bird”) says they’ve been increasingly trying to smooth the relationship between the two groups. “If you put a favored food item in front of a wild animal in the northeast you are going to have some issues. It’s understandable that [farmers are] not going to be wild about wild turkeys.” 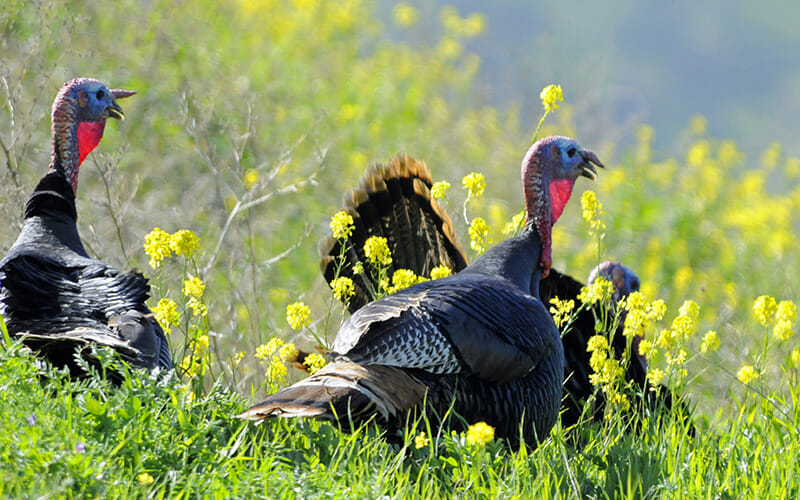 Wild turkeys in a field of mustard flowers.

The challenge, however, is that farmer cooperation is critical to the success of the state’s profitable turkey hunt, so many farmers feel they should have a say in hunting regulations and legislation. While some hunters own farmland, most depend on free access to agricultural lands in order to pursue the birds. The farm bureau’s Olson is emphatic on this point. “Farmers receive no economic benefit from turkey hunting. It’s a cost to them.”

As a result, Allen says his department tries to bend over backwards to accommodate aggrieved farmers. While he thinks the issues are a bit overstated, he says that “doesn’t mean they’re not legitimate.” He also says the birds are sometimes unfairly scapegoated.

And he’s not the only one who thinks so. Turkey troubles have farmers up in arms, but researchers say the bird is getting a bad rap.

In an oft-quoted 2004 study from Indiana’s Purdue University, researchers equipped white-tailed deer, raccoons and wild turkeys with tracking devices and monitored fields for two years. Those researchers concluded that the birds, which feed in the daytime, will show up at the scene of an overnight crime committed by a deer or a raccoon and be unfairly blamed.

Janice Gardner, who studied the relationship between Maine blueberry farmers and the birds for her 2009 Master’s thesis, says she has more of a nuanced perspective.

“Oh yeah. They eat blueberries, there’s no doubt about that,” she says. The trick, according to her, is communicating to farmers how little damage turkeys do, at least relative to other animals and to the total crops they could potentially eat.

For her study, Huebert tracked numbers of birds she saw in fields and the size of the field. Extrapolating that with the energy requirements for a wild turkey, she concluded that on a 20-hectare field wild turkeys were eating 18.7 kilograms, or about $30 worth, of blueberries, totaling a 0.5 per cent crop loss.

The problem may be perception. “Wild turkeys are big and they’re out during the daytime and they’re out in flocks,” says Huebert. “Because they are so visible it’s easy to point a finger at them, but perhaps that’s not the whole story.”

Correction: A previous version of this story incorrectly identified Janice Gardner by her maiden name.

Popular
7 Smokable Plants You Can Grow That Aren’t MarijuanaBrian Barth
Agricultural Runoff Pollutes Well Water, a ‘Public Health Crisis In the Making’Madison McVan, Investigate Midwest
The Fertilizer Shortage Will Persist in 2023Shea Swenson
Move Over, Mezcal. A Sustainable Tequila Alternative Is Taking Over.Hollie Stephens
Why Don’t We Eat Turkey Eggs?Dan Nosowitz
Explore Modern Farmer
Related
Features, Food Security, Labor
The Rise of Virtual Farmers MarketsLeah Borts-Kuperman
Environment, Labor, Water
California Farms and Farmworkers Attempt to Recover From Record FloodsNaoki Nitta
MTMF, Plants
This Modern Farmer Wants You to Grow a New Potato StrainBevin Cohen
Food Security, Labor, news
A New Egg Co-operative Has Hatched in the Western U.S.Lindsay Campbell
wpDiscuz
We use cookies on our website to give you the most relevant experience by remembering your preferences and repeat visits. By clicking “Accept”, you consent to the use of ALL the cookies.
Cookie settings ACCEPT
Privacy & Cookies Policy