Obama’s Climate Change Speech: What It Means for Farmers

This afternoon President Barack Obama unequivocally put carbon pollution on notice. What does this mean for farmers? 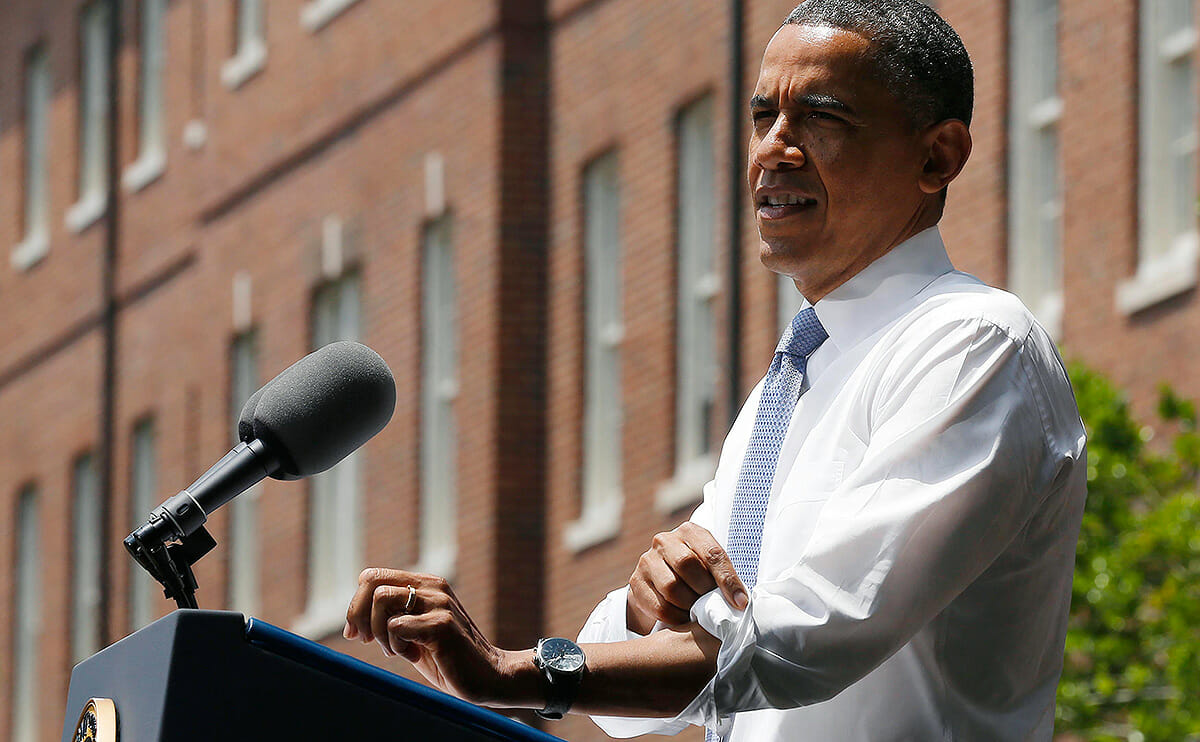 This afternoon President Barack Obama gave a speech for the history books, unequivocally putting carbon pollution on notice. Leaving no room for doubters (“We don’t have time for a meeting of the Flat Earth Society!”), Obama outlined a major three-pronged initiative to attack climate change. Simply put: the U.S. must use less dirty energy, more clean energy, and everyone needs to stop wasting the energy we have.

An initiative like this could have major impact on farmers. As Obama noted in the speech, farmers have gone from seeing their crops wilted last year due to drought, to losing crops after this year’s heavy rains and flooding. He said these ag calamities are quickly passed on to consumers, as we see our grocery prices spike. And Obama rounded out the speech talking about the many faces of our brave new anti-emissions world, including the farmer’s role in producing new sources of clean fuel.

We caught up with Laura Lengnick, a lead author in the USDA’s recent report Climate Change and Agriculture in the United States and head of sustainable agriculture at Warren Wilson College, to get her take on Obama’s new initiative.

Modern Farmer: What have been the biggest near-term effects of climate change on U.S. farmers?

Laura Lengnick: Right now farmers in U.S. are reporting significantly increased challenges in field management due to increased variability in weather. This is mostly precipitation, the effects of too much or too little water. Particularly in the Midwest, with soybean and corn farmers, there has been little time when the soils were at the appropriate moisture to get out and get field work done, planting and cultivating.

MF: When did this unpredictable weather arc begin?

LL: One interesting outcome of the USDA report is that we realized a big gap in our research. There have been almost no interviews with farmers, no records of the weather changes farmers have witnessed.

MF: In a recent This American Life episode on climate change, one reporter found many Colorado farmers were deniers that climate change existed. Have you seen this phenomenon in your work?

LL: That is so interesting! I’d love to hear that show. We recently held a climate change conference in North Carolina with about 200 farmers. And we started out the day by making same mistake as that reporter, asking the farmers, “What climate change effects are you experiencing?” The room was dead silent. It hit me that they’re not thinking about it as climate change. So I laid out a list of what specific effects they might be seeing: weather disruptions and variability and pollination disruptions. Then the room came alive.

MF: Climate change can be a loaded term.

LL: I think so. It is such a politicized issue, that farmers aren’t thinking of what they’re seeing in that way. I suspect we may just have to phrase things in a differently. This is just a hunch, of course, purely anecdotal.

MF: Climate change is now an official U.S. priority. What would the consequences of inaction be on agriculture?

LL: If we take no action? Losses would increase. It would become more expensive to farm. This ends up being more expensive for all of us, because the government subsidizes crop insurance. That’s all of our money.

MF: A report came out recently that said each American spent an additional $51 for crop insurance due to last year’s droughts. Does that sound right?

LL: I hadn’t heard that, but that’s a great statistic. Farming’s not all that different from other sectors of our economy, like our transportation infrastructure. Hurricane Sandy created a lot of damage in New York, and all of our taxes go into paying for FEMA assistance.

MF: Obama mentioned farmers would be called on to grow new kinds of fuel. Can we assume that he’s talking about ethanol?

LL: Yes, and that’s an issue rife with complications. When you look at the energy return on energy invested, it’s not a good picture. Then there’s all the issues of replacing food crops with fuel crops, which has its own effects on food prices. Ethanol is just a rich issue, with lots of different considerations. I may be on the radical end here, but I think it’s safe to say that ethanol is not going to fix things.

MF: Obama talked about how we need to shore up our infrastructure to be better prepared for bad weather. How can farmers be prepared?

LL: There is a whole toolbox of practices, and that toolbox would be labeled ‘sustainable agriculture.’ Farmers can reduce their vulnerability to climate change by increasing the resilience of their farming system. One example is crop rotation. If you’re growing a diversity of crops, one specific weather event may take out one of those crops. But if your crops vary in their life cycle and periods of climatic sensitivity, it spreads your risk out through the growing season. Another example any practice that builds soil quality. High-quality soil protects you from too much water and it protects you from not enough water. Another word for that is robustness.

LL: Well there’s a big difference between climate adaptation – all the things I just talked about – and mitigation. Let’s say you ask a dairy farmer to cut methane, and he may not see direct effects for 20 years, if ever. That’s mitigation, asking a farmer to just change their farming practice, with no visible financial benefits. It’s a tougher sell. Climate adaptation through sustainable farming benefits the farmer, and the rest of the world.

Ed. Note: The USDA will be setting up seven climate adaptation hubs nationwide, to help farmers deal with extreme weather variability. Some expected Obama to discuss the hubs in his speech. He didn’t, but Lengnick sent along this information:

Building on the existing network of federal climate-science research and action centers, the Department of Agriculture is creating seven new Regional Climate Hubs to deliver tailored, science-based knowledge to farmers, ranchers, and forest landowners. These hubs will work with universities and other partners, including the Department of the Interior and the National Oceanic and Atmospheric Administration, to support climate resilience. Its Natural Resources Conservation Service and the Department of the Interior’s Bureau of Reclamation are also providing grants and technical support to agricultural water users for more water-efficient practices in the face of drought and long-term climate change.