Marching Against the (Genetically Modified) Grain

Organizers say more than 2 million turned out for marches against Monsanto and GMOs. 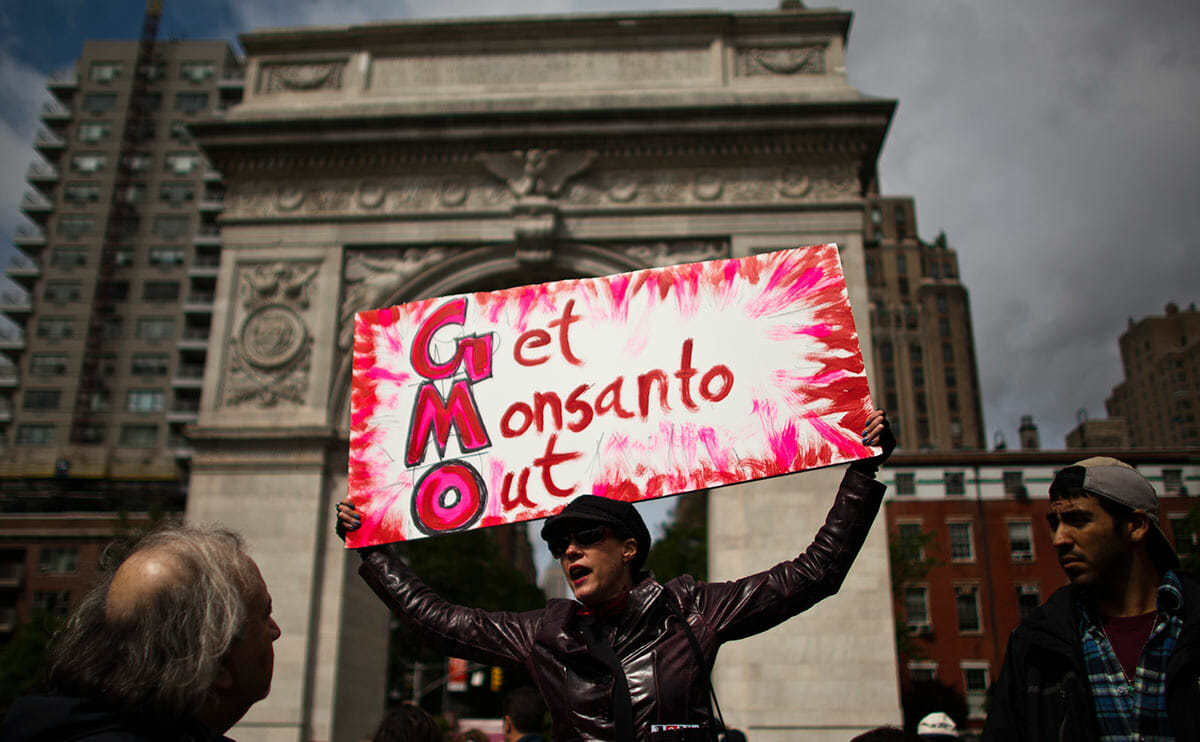 When Tami Canal created a Facebook page last July calling for protests against Monsanto, a leading producer of genetically modified seeds and herbicides, she had no idea what would be the response. But this past Saturday, she got her answer: March Against Monsanto protests were held in 52 countries and 436 cities from Buenos Aires to Boston.

According to the march’s organizers, some 2 million people turned out for the protests, which rallied against both the seed giant and the general use of genetically modified seeds in the global food supply. In Los Angeles, protestors held signs that read “Real Food 4 Real People,” while some of the 80 protestors in Birmingham, AL, dressed as butterflies and bees, the AP reported.

As anyone with a few liberal friends and access to social media knows, Monsanto has been a particularly hot topic lately: last Thursday, the U.S. Senate voted overwhelmingly to reject an amendment allowing states to require the labeling of genetically modified foods although another food labeling bill, introduced by Senator Barbara Boxer (D-CA) and Representative Peter DeFazio (D-OR) awaits debate. The Food and Drug Administration currently does not require the labeling of such foods, and has stated that there is no difference between GMO and organic, non-GMO products. It does, however, support voluntary labeling, as does the Biotechnology Industry Organization, a lobbying group that represents biotech companies like Monsanto and DuPont.

The amendment, which was introduced by Senator Bernie Sanders of Vermont, lost in a 71-27 vote. The vote took place during a debate about the five-year farm bill, which includes substantial support for the producers of corn and soybeans, crops that are often genetically modified. In March, President Obama signed into law a bill stating that if a seed’s USDA approval is challenged by a court ruling, that seed can still be used and sold until the government decides otherwise. Critics have labeled the new law, which would permit the secretary of agriculture to block a judicial injunction and allow the use of particular seeds, the Monsanto Protection Act.

But while Senate Republicans shot down efforts to repeal the amendment, petitions for its reversal abound. An Oregon senator offered one, that, as of May 23, garnered more than 130,000 signatures, according to the Huffington Post. A similar petition created by the organization Food Democracy Now, racked up some 100,000 signatures, while another from CREDO Action has garnered 192,511 to date. The petition’s Senate sponsor, Jeff Merkley (D-OR) told the Huffington Post that he would again press for a vote later this week.

The growing attention to and debate over GMO crops meant that last Saturday’s March Against Monsanto couldn’t have come at a better time. Organizer Canal told the Chicago Sun-Times that if only 3,000 people had joined her, she “would have considered that a success.” Calling the turnout “incredible,” she said it “was empowering and inspiring to see so many people, from different walks of life, put aside their differences and come together today. We will continue until Monsanto complies with consumer demand. They are poisoning our children, poisoning our planet. If we don’t act, who’s going to?”

In its defense, Tom Helscher, Monsanto’s Director of Corporate Affairs, wrote in the Chicago Tribune on Saturday, that Monsanto “is primarily a seed company.” “While we respect each individual’s right to express their point of view on these topics, we believe we are making a contribution to improving agriculture by helping farmers produce more from their land while conserving natural resources such as water and energy,” he said. Judging from the response to Canal’s Facebook protest, and, now, the debate in the U.S. Senate, Monsanto is one controversial seed company.