How a Common Fertilizer Became a Meth Magnet

On April 17, 15 people were killed and more than 160 injured when a fire caused ammonium nitrate stores to explode at a fertilizer plant in West, Texas. In the wake of the accident, Reuters uncovered evidence that the plant had been a regular target for intruders who tampered with chemical tanks on at least […] 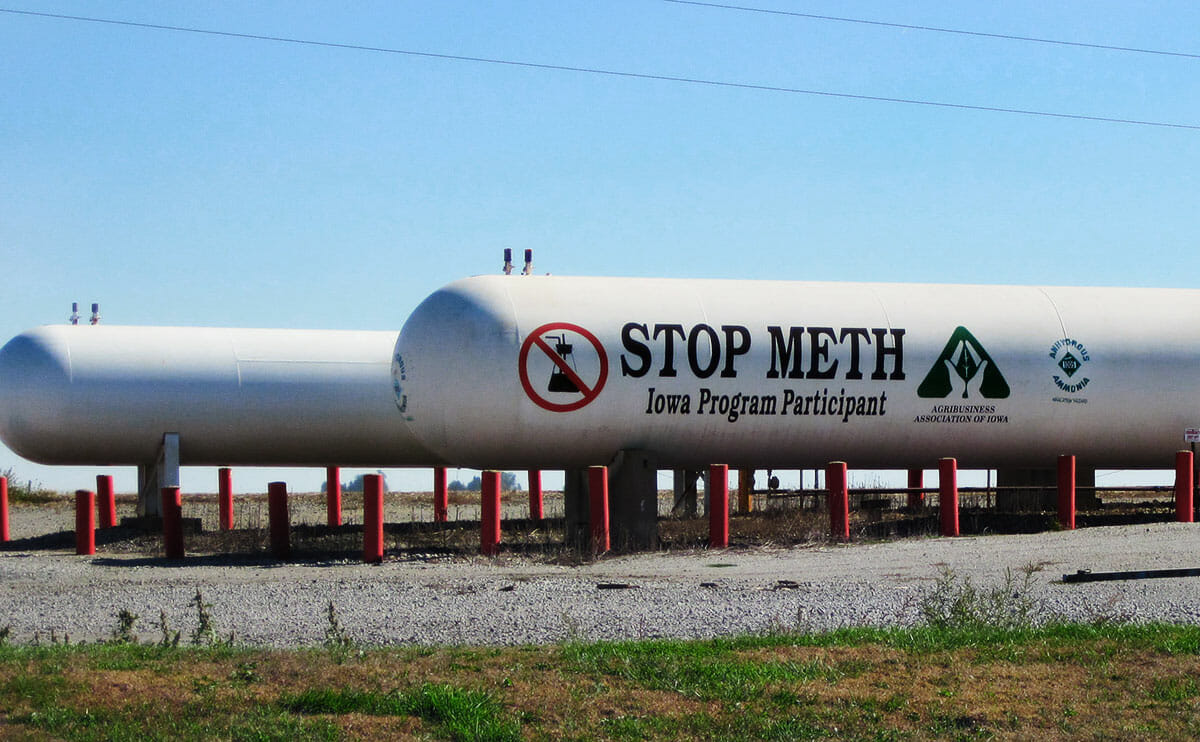 On April 17, 15 people were killed and more than 160 injured when a fire caused ammonium nitrate stores to explode at a fertilizer plant in West, Texas. In the wake of the accident, Reuters uncovered evidence that the plant had been a regular target for intruders who tampered with chemical tanks on at least 11 separate occasions.

These burglars weren’t after ammonium nitrate, the volatile chemical that can quickly turn explosive in the wrong hands (like that of Oklahoma City bomber Timothy McVeigh). They were siphoning anhydrous ammonia, another nitrogen fertilizer with a nefarious side gig: it’s a prime ingredient in illicit methamphetamine manufacturing.

According to John Donnelly, resident agent in charge of the DEA office in Fresno, anhydrous ammonia is used in a meth-making process called the Birch reduction or the “Nazi cook” (in honor of the meth distributed to German soldiers by Nazi leaders during World War II).

Thieves siphoned the dangerous liquid gas from nurse tanks left on farmer’s fields and used ephedrine from over-the-counter cold medicine to synthesize the drug. “They’d take the ephedrine from cold tablets, crush them up and separate out the binding agent. Then they’d add the anhydrous ammonia and a couple other ingredients. This method was so volatile that it will just react with itself with no heat source needed.” That reactivity is also the reason clandestine meth labs notoriously go boom.

White cylindrical tanks holding anhydrous ammonia can be spotted in fields all over the country. The fertilizer is loved as an efficient and cost-effective way to implant nitrogen into the soil, but it’s loathed for being one of the nastiest treatments on the farm. Chemically, it’s the same ammonia used in cleaners around the house, minus the water (thus, it is “anhydrous”). The vapor is corrosive to human skin and aggressively seeks out water wherever it can find it, which means that anhydrous leaks can result in horrific injuries to the eyes, throat, sinuses, and lungs.

The vapor is corrosive to human skin and aggressively seeks out water wherever it can find it, which means that anhydrous leaks can result in horrific injuries to the eyes, throat, sinuses, and lungs.

To remain in liquid form it must be stored under high pressure and released under tightly controlled circumstances. But while farmers and distributors resort to goggles, rubber gloves and respirators when handling the chemical, thieves on the hunt for anhydrous often use no protection and rudimentary equipment.

“It’s the craziest thing,” says Tommy Farmer, director of the Tennessee Methamphetamine Task Force. “We’ll see them standing over it, no protection, in shorts and flip-flops, cutting the line off and draining it into a bucket with exposed hands and no protection. We’re expecting to go down there and find them dead.”

Often the thieves use bicycle tubes or hoses to siphon the chemical into makeshift containers. Rick Smith of Riley Brothers Farm in Adams, Tenn. says that since they found a tank with a garden hose attached to it with duct tape, they’ve taken precautions. “We leave the tanks where they can’t be seen from the road, like behind a tobacco barn, or we try to take them back to the station that refills them at night.”

Smith says they’ve haven’t had as many problems with anhydrous thieves as they used to, but others are still dealing with frequent theft.

Keith Everhart, general manager at Laughery Valley AG Co-op in Osgood, Ind., says that they catch three or four people stealing anhydrous every couple months. “We see it quite a bit,” he says, but thinks most of the theft goes unnoticed. “They only steal about three to four gallons at a time, and the gauges on the tanks really won’t pick that up.” Everhart says that motion-activated lights don’t deter the thieves, and he’s hesitant to use the valve locks that police recommend. “The problem is if they break in there and mess around too much then you’ve got a 1,000 gallon tank venting liquid gas. You’ve got to evacuate people. If they want it bad enough they’re going to try to get in there somehow.”

Even though Everhart says the problem has been going on for a long time, the danger still keeps him up at night. “You’re wondering, one of these nights when they do it, are they going to forget to shut the valve off? It’s scary sometimes.”

Anhydrous theft peaked in the early nineties, when ephedrine was still readily available in pharmacies. Since then, farmers say it’s leveled off a bit. Legislation restricting the sale of over-the-counter cold medicine containing ephedrine and better security on farms has contributed to make the birch reduction less popular among meth cooks. A newer method, called “one pot” or “shake and bake,” has become the go-to for meth cooks. It’s easy enough to make in the back seat of a moving car and uses ammonium nitrate from cold packs in place of anhydrous ammonia.

Even if anhydrous theft is waning, the repercussions of illicit meth labs continue to affect farmers. Disused sheds and other structures on farmers’ property are vulnerable to being used as temporary labs, and the toxic byproducts of meth manufacture can be dumped on and around fields. The Pennsylvania Farm Bureau advises that farmers maintain locks on all sheds and barns and keep an eye open for suspicious vehicles, tracks, or trash that could signal meth manufacture, such as laboratory glassware, Sudafed boxes, and 2-liter plastic bottles containing residue. Farmers should call law enforcement immediately if they encounter evidence of meth manufacture on or near their property, and should never confront suspected meth cooks themselves.

Farmer says that if there’s one thing the meth epidemic has taught him, it’s that farmers have to stay vigilant. “I couldn’t have imagined when I was a kid running around on a farm, that anhydrous ammonia would be used to make drugs,” he says. “Times have changed. Where we’re at as a society has changed. When I was growing up we didn’t lock our front door. Those days are over.”

I am so sad as a mother that some young people are involved in this horrible epidemic!!! And I thank GOD that my 2 sons have taken a better path in life and my prayers go out 2 the mother’s who have not been blessed in this way!