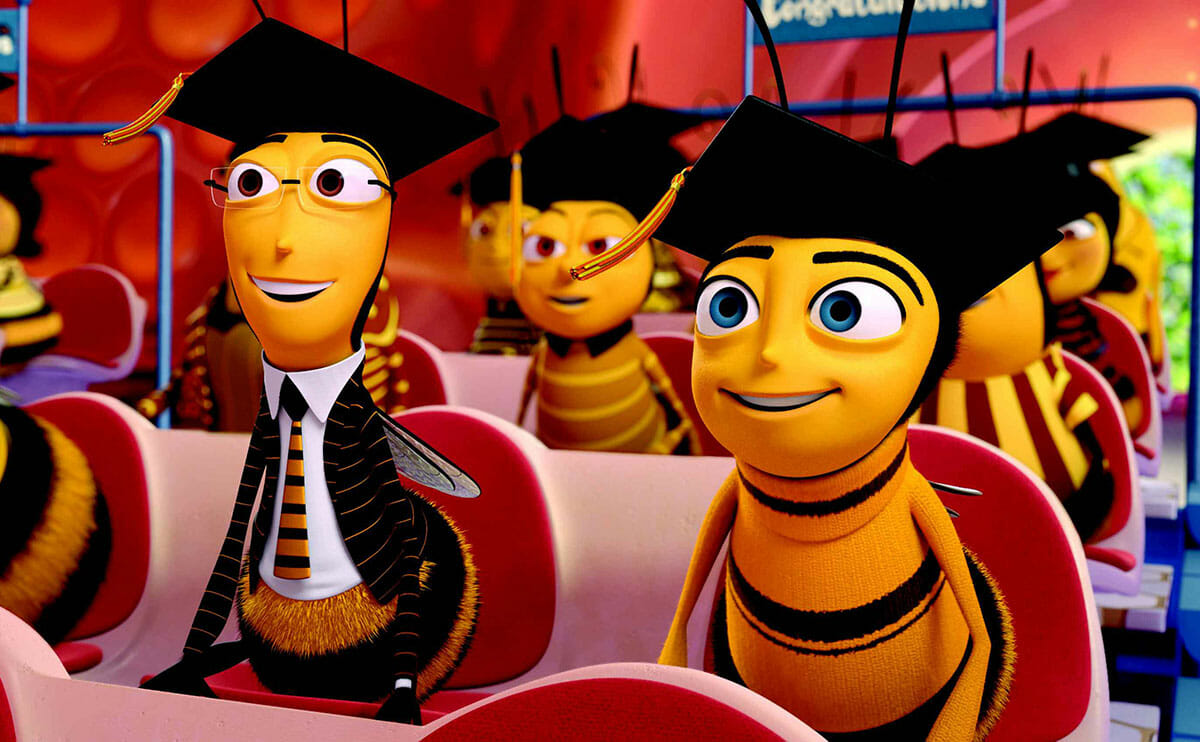 The 2007 animated film Bee Movie was the passion project of Jerry Seinfeld. It was the animated journey of Barry B. Benson, a bee who has graduated from college and is unsatisfied with his job prospects at Honex Industries. (Spoilers ahead.) He eventually leaves the hive, travels to New York City, falls in love with a human florist Vanessa, and ends up filing a class action lawsuit on behalf of bees when he discovers honey is being sold in grocery stores. After winning the lawsuit, bees stop pollinating plants and flowers. Earth’s flora withers, forcing Barry and Vanessa to hijack an airplane headed for the Pasadena Rose Bowl in a desperate last-ditch plan to rescue the world’s plants.

However, sharp-eyed IMDB users were able to spot some factual errors within this premise, such as:

Although a large enough swarm of bees could theoretically generate as much lift as a jet liner, the bees would have experienced “vacuum” forces between themselves and the body of the jet at the speeds depicted, rather than generating lift, like two ping-pong balls being drawn together by blowing a stream of air between them.

Someone claims that the Pasadena parade has the “last flowers in the world.” But Barry’s lawsuit only affected the USA; bees in other countries are presumably still pollinating flowers as usual.

Bees in the real world have a very different biology than the bees in this movie. In the real world, male bees don’t contribute at all to the honey-making process, which is done entirely by females. Male bees are drones, and just hang around the hive to mate with the queen. Drones have no stingers – that’s the female reproductive organ and self-defense method – though bees do tend to die after stinging, as the stinger (which has tiny barbs on it) rips free of the body as the bee flies away. Also, male mosquitoes do not drink blood, only female mosquitoes do, as a protein source for their eggs, not as sustenance for themselves. Furthermore, insects have 6 legs, not 4. They have compound eyes, not simple ones. Lastly, they do not have fingers, teeth, clothing or the ability to mimic human speech.

The movie depicts bees using pollen from just one kind of flower to pollinate several different plant species. Flowers can only be pollinated with pollen from the same species.

Plants don’t wither and die if they are not pollinated, they simply don’t develop viable seeds. Although bees do contribute significantly to the pollination process, other animals do the same thing, not to mention that a simple gust of wind can cause pollination. Unpollinated plants will simply bloom again at another time, giving another chance for pollination.

Commercial jet airplanes of that size usually are going faster than 500 miles per hour, and the fastest insect (not the bee) only goes at about 30 miles per hour.

And, listed under “Incorrectly Regarded as Goofs:”

Perceived errors regarding insect anatomy and behavior (e.g. male mosquitoes drinking blood) are part of the movie’s internal logic and suspension of disbelief.

How could a multimillion dollar movie be made without any research into the lives of Bees? Starting with the fact all worker bees who gather pollen and produce honey are females, every single one of them. Male bees do nothing, and have no stingers, males only exist in small numbers, like three in a hive, to fertilize the Queen and when they cant they are thrown out of the hive. It is an all female society. Only the females have stingers. As usual Hollywood creates a sexist imitation of itself. Children should not be allowed to even see this movie.… Read more »

This site is 100% accurate, but this s insane it’s a kids movie not a wildlife documentary. (I KNOW AND AM FULLY SURE THAT YOU WONT POST MY COMMENT BUT) Forreal tho, kids can learn this kind of stuff by stepping outside. You put this up to spread hate, and not the facts

Some suspension of disbelief in order to carry a story is completely acceptable, e.g., talking animals; however, the failure to make an effort to accurately represent science with mistakes or misrepresentations that could be researched and avoided with a five minute Google search on bees does a disservice to our children. I love Seinfeld’s humor. I wish he had consulted with someone with a science background who might have reviewed the script or even just asked a production assistant to read a Wikipedia article on bees.

“Male bees are drones, and just hang around the hive to mate with the queen”
.. no they don’t. male drones never mate with their own queen. they do a mating flight where they attempt to mate with a foreign queen, and if they are successful the process kills them. if they are unsuccessful, they return back to their hive. but eventually when resources dwindle, their sisters will chew off their wings and boot them out of the hive.