How a Desert Town Is Growing Its Way to Better Health

A community garden blooms behind the local library in Huachuca City, Arizona. 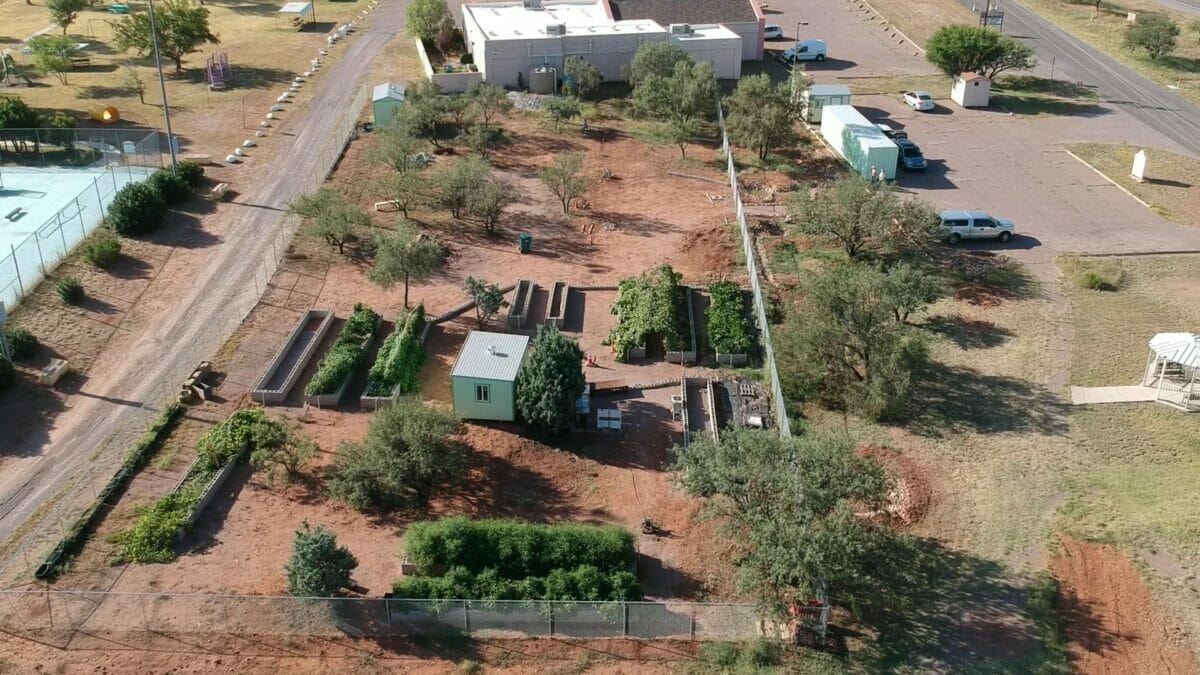 Located in a desert—a literal one, as well as an isolated area with limited access to food—the dry patch of land now home to the Huachuca City Community Garden (HCCG) was never intended to be a pick-your-own produce garden. But that all changed four years ago, after one resident took to Facebook to share her vision for what local resources could look like.

In 2018, Holly Weichelt, a healthcare professional, laid bare her dream for the town. In a Facebook missive, she wrote about growing food and providing nutrition education. “I think most of us [have] something inside of us that wants to make a difference in this world, but not too sure of how this can be done, because we are only one,” Weichelt wrote. “…but we standing together, united with a common purpose and mission, can achieve whatever WE can dream up!” She went on to detail her dream, involving a community garden with a chicken coop, one that followed ancient gardening techniques that conserved water while feeding senior citizens and getting community youth involved in the operation.

Local businessman Jim Goad saw Weichelt’s post. He understands the scope of hardship afflicting many in Huachuca City, a town with 1,700 residents and a 34-percent poverty rate. Motivated by her pitch, he gave Weichelt access to the empty half-acre lot behind his company for one year, agreeing to pay for the water that would nourish her garden plan. A handful of other volunteers soon joined the initiative, making weekly deliveries of fresh produce to the library, senior center and the lobby of four federally subsidized apartments.

Like Goad, Ann Aust, a professor emeritus of biochemistry, was moved by Weichelt’s vision. She knew the borrowed lot had a time limit and took action to find it a new home. A chance connection with the former town librarian, now town manager, Suzanne Harvey, planted the seed of opportunity. Together, they crafted a proposal that would utilize the open land behind the local library to address the town’s food insecurity. 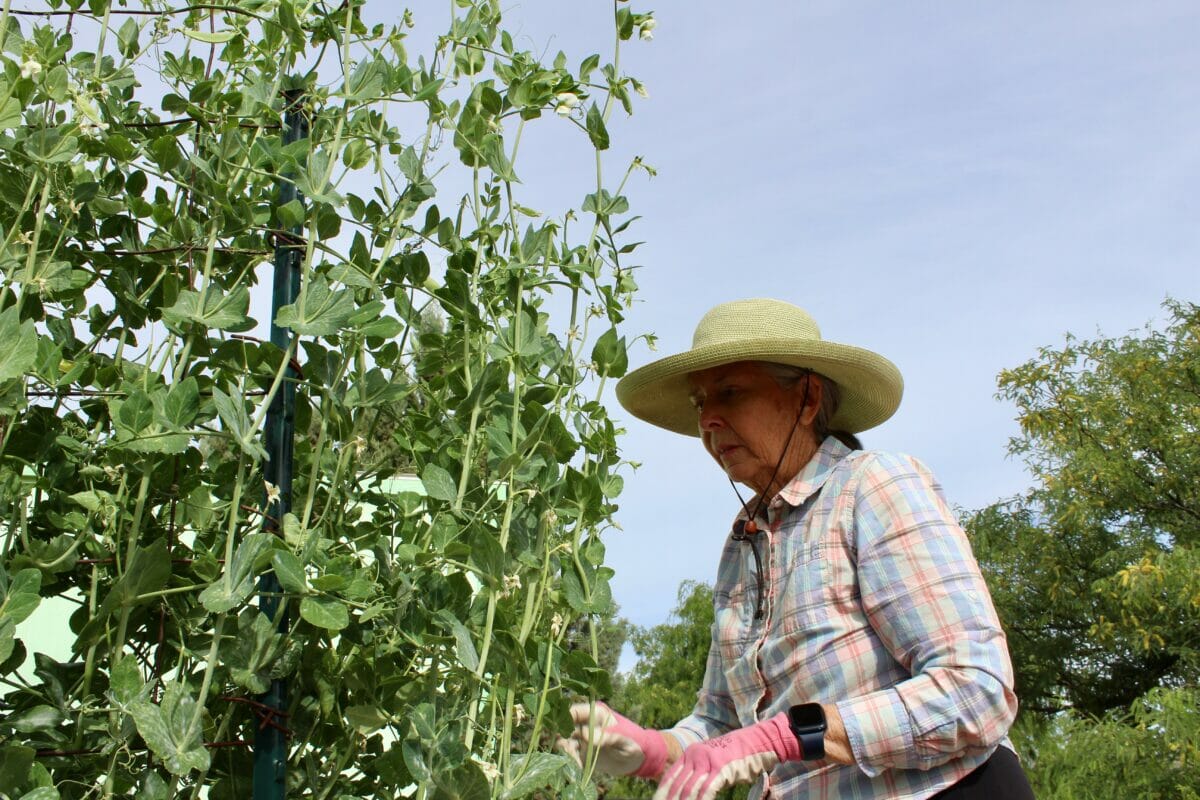 In August 2019, the town council agreed to fund the unique solution. A Memorandum of Understanding between the town and HCCG authorized the nonprofit to use the land to create a garden, a new town asset. It also stipulated that the town’s agreement would provide access to water free of charge. Later that year, HCCG received a $50,000 grant from the Legacy Foundation of Southeast Arizona.

It wasn’t long before HCCG encountered an unusual problem for a desert garden: the potential for too much water. Each summer, Huachuca City receives intense summer monsoon rains. The dry soil of Southern Arizona is unable to absorb the sudden rainfall, leaving many areas susceptible to flooding. A five-inch culvert was poised to direct rainwater runoff from nearby impervious surfaces directly into the garden, damaging crops at a pivotal time in their growth.

Caleb Weaver knew what had to be done. An ecological restorationist and landscape designer for Borderlands Restoration Network, an environmental nonprofit in nearby Patagonia, he found ways to create opportunities for the water to soak into the ground along its natural flow path. Weaver’s solution was to install 14 circular infiltration basins, which were six feet deep. Landscape cloth was layered in the basins to prevent Bermuda grass, a fairly invasive weed in the area, from growing. The total capacity of the basins is 30,000 gallons of rainwater, which helps to replenish the groundwater. It takes between one half and three quarter inches of rain to reach capacity.

Weaver’s plan called for 20 tons of riprap—a layer of large stones or boulders to protect soil from eroding—to stabilize the basins. HCCG needed the cavalry for a task of this scale. In the early 1900s, the US Army 10th Cavalry arrived at Fort Huachuca, about nine miles away. Their contemporaries on the post, the 2-13th Aviation Regiment, Charlie Company, proudly answered the call for volunteer support. Every Saturday for five months, a group of soldiers worked to build the basins, swinging pickaxes into the dry soil, as the summer heat set in. They added native grasses and plants to create a pollinator habitat. Setting in the rocks was the final step.

Although HCCG uses town water in the garden, the collected water doesn’t go to waste. “Our justification is that we built these 14 basins, and this captured water goes back into the soil,” says Aust. During last year’s monsoon season, the garden basins replenished 800,000 gallons of water into the ground.  “This way more than compensates for any water that we’re using. It doesn’t mean that’s the best way to do it, but when it’s your only way, then you need to think of some ways to put water back, always put water back.” 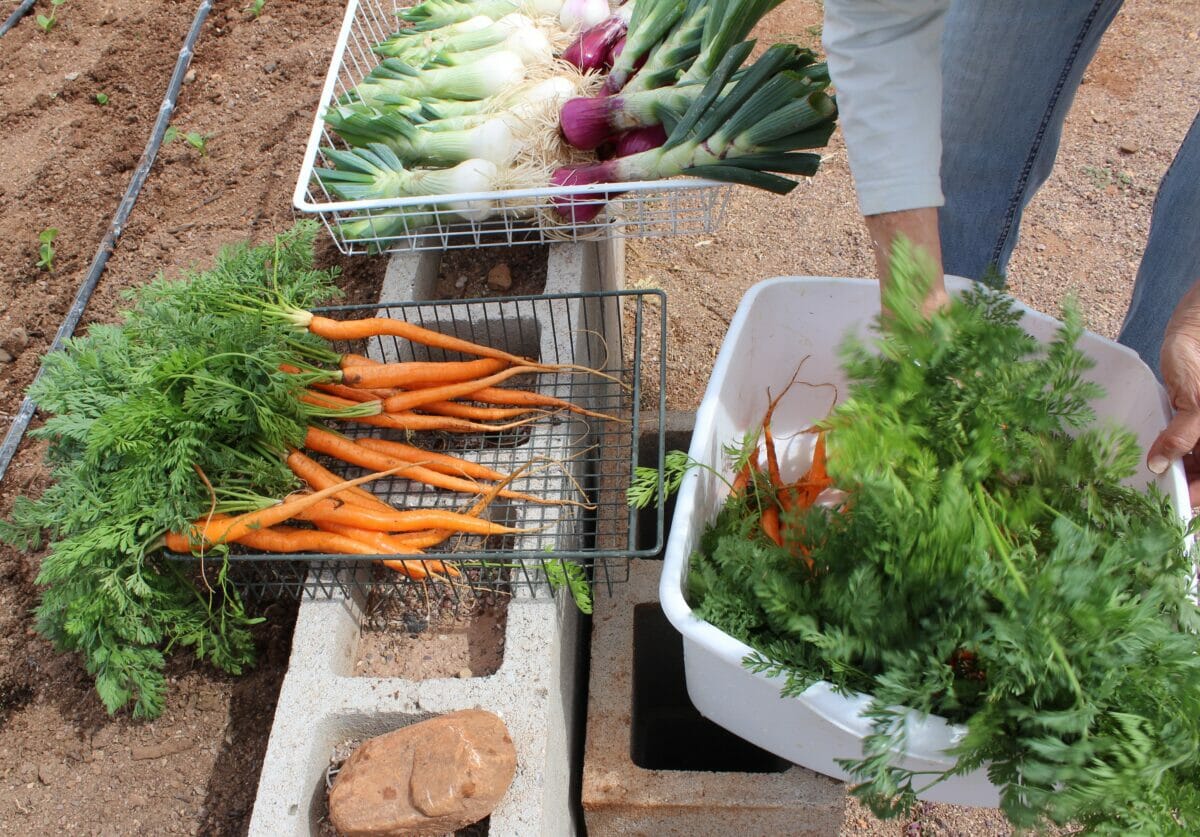 Since they began in 2018, the HCCG volunteers have grown and distributed approximately 9,000 pounds of organic vegetables to residents in need. The organization’s mission is also to provide food literacy. That begins in schools, with potential future volunteers. A portion of the garden is dedicated to a student garden, where Huachuca City School’s 300 students (pre-kindergarten through eighth grade) can learn more about growing their own food. The hope is that when students’ hands reach the soil, STEM knowledge will start to grow. Back in the classroom, a garden weather station transmits data for further discovery. A greenhouse, nearly completed, will soon provide a place to grow seeds and conduct experiments.

HCCG is equally committed to helping adults embrace health from the ground up. Last fall, a registered dietician with the T. Colin Campbell Center for Nutrition Studies offered free healthy eating workshops. This summer, HCCG will teach free classes about home gardening on a small scale. The library plans to provide a seed exchange, where members can swap different varieties of fruits and vegetables to try growing themselves at home. 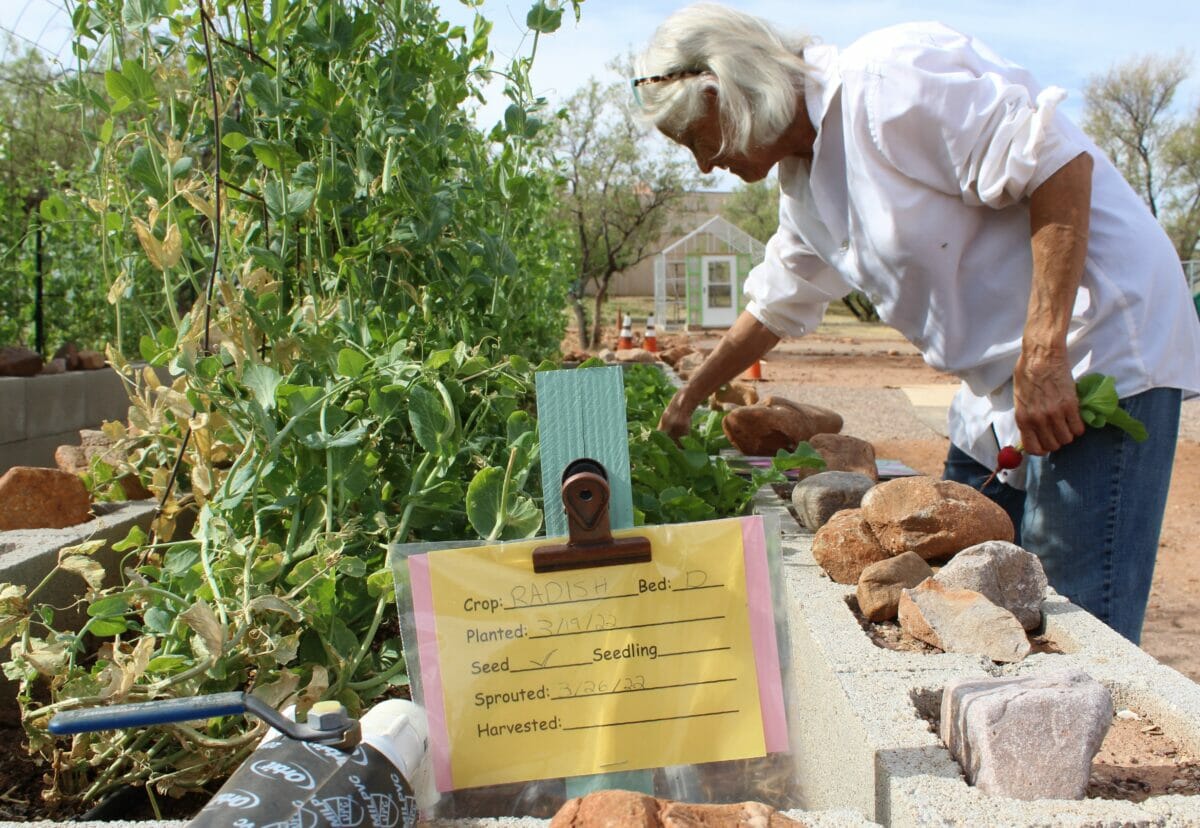 The kind of rural collaboration that has helped make HCCG successful, involving local government, organizations and public residents, is not commonplace. And according to Keith Mueller, director of the Rural Policy Research Institute and RUPRI Center for Rural Health Policy at the University of Iowa’s College of Public Health, it is an untapped approach. In rural places with fewer resources, says Mueller, “you’ve got to bring what resources you have together, and you need to know how to tap whatever the local assets are.”

He cites HCCG as an example of the outcome when you combine these two elements. “In a program focused around food and nutrition, you’re adding to assets and contributing to human capital by creating healthier lifestyles,” says Mueller. It’s a home-grown, sustainable food desert solution.

Aust believes that a connection to growing food is at the center of a community. “And the reason is because it connects you to nature and it connects you to other people,” she says. “The only way we’ll save this planet is for people to grow up connected to it.”

You might also want to tap into some of the publications from Tucson Organic Gardeners. They have two that are geared specifically to desert gardening. One is on composting in the desert and the other is on organic gardening in the desert. Just a thought.

Thank you for writing this wonderfully thorough article and promoting good things!

I take issue with the author. Huachuca City is not isolated from food access, as it is located approx 5 miles from Sierra Vista, Arizona. I live further from Sierra Vista, than Huachuca City. While it is too small to support a grocery store, that is a small shop that sells food along with other items. A community garden in any location is a good thing for those who don’t have the ability to garden their own property. Every year I have my own garden, because I like to know where my food comes from and what’s it it.