Community members use self-reliance as a tool in the fight against food apartheid. 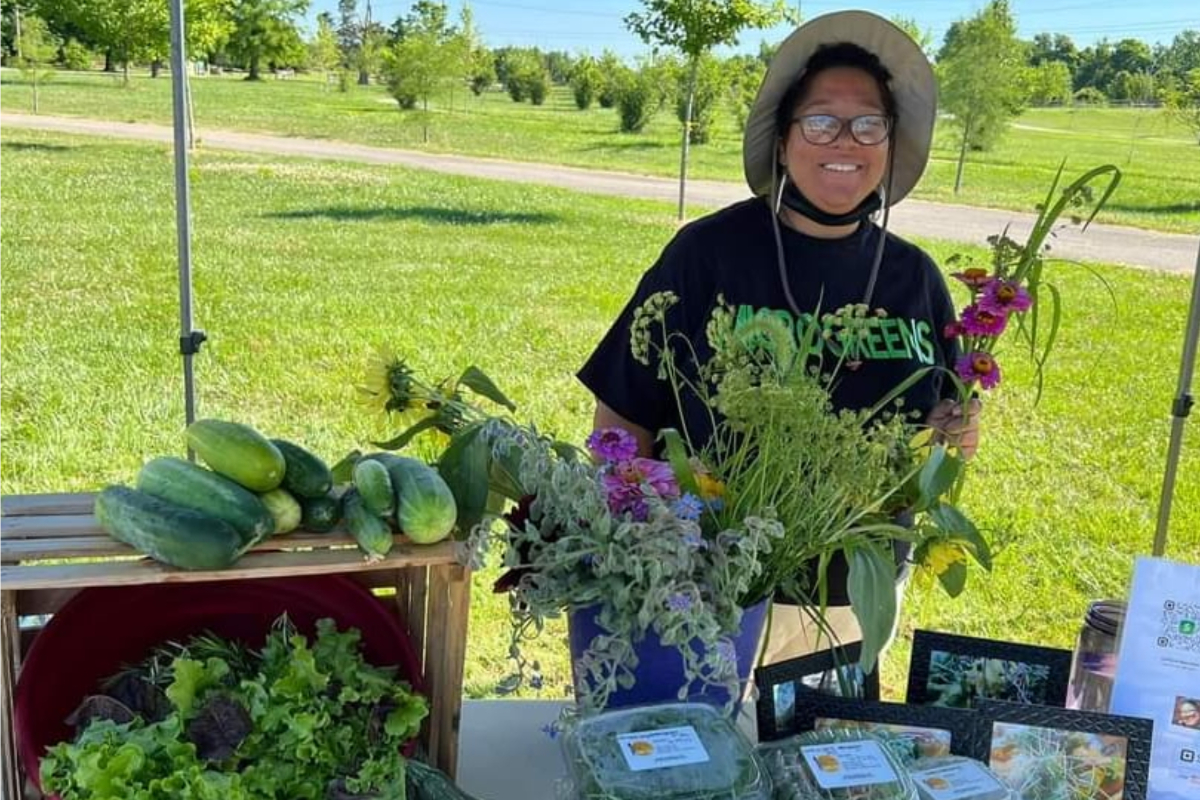 LeTicia Marshall’s backyard is filled with raised beds. Her front yard contains no less than three greenhouses and her side yard would be home to more crops if she didn’t require room for her kids to play. Compared to the spacious rural farm she grew up on, Marshall’s growing operation is small, and limited to the quarter acre of land around her house in the heart of Shively, a neighborhood in southern Louisville, Kentucky.

But what Marshall lacks in space she makes up for in mission. After years of gardening, she left a career in social work to start Bearfruit & Grow, LLC. In addition to selling what she grows, Marshall offers coaching sessions and workshops aimed at giving her community the confidence to grow their own food. “I sat on the idea for a few years, and did some market research to make sure people wanted what I was offering,” she says. “In July 2020, I took the leap.”

Marshall and her company represent a fraction of the growing urban farming movement in Louisville, where gardeners and food justice activists are fighting against corporate and government inaction around food security. The city, which has a population of more than 600,000, is still reckoning with the summer 2020 murders of Breonna Taylor and David McAtee at the hands of police. And sharp racial inequalities that still exist are reminders of unhealed wounds.

Food apartheid impacts predominantly Black neighborhoods, like Shively, disproportionately. This is due to a combination of factors including poor transit options and large grocery chains fleeing “economically depressed” areas. The disparities in food security are stark: 16 percent of children in Kentucky’s Jefferson County, where Louisville is the county seat, lived in food-insecure households in 2019. That’s more than double the rate of the wealthier neighboring Oldham County.

RELATED: How One Organization is Restoring a Community of Black Farmers

Because of the government’s sluggish response to the issue, Marshall and other Black community leaders are taking action and getting their hands dirty—literally.

“That’s really how Bearfruit & Grow started,” Marshall recalls. “I was sick of hearing about grocery stores closing, sick of hearing how south Louisville residents are treated, sick and tired of my people being the ones that are targeted. So I thought, ‘How can I do my part?’”

She is not alone in her mission to teach self-sustainability to her community. Just a few miles away, Shively resident Von Barnes keeps chickens, ducks, quail and goats at his residential property. They are part of his business, Kentuckiana Backyard Farms, which shares an educational goal in common with Marshall’s Bearfruit & Grow. “When I was getting started [raising chickens] I started asking questions, looking for opportunities to learn,” says Barnes. “I didn’t realize when I jumped into the space that I was way ahead of everybody else. More people came to me with questions than I had for them.”

Faced with this reality, Barnes launched his business in 2019, providing workshops and educational opportunities for budding backyard farmers. He also sells vegetables and eggs from his own urban farm. As with Marshall, community was the foundation of his business. “I was one of the first people in my neighborhood [to keep chickens]. And as I started doing it, more people got chickens,” he says. “It just became a community thing.” 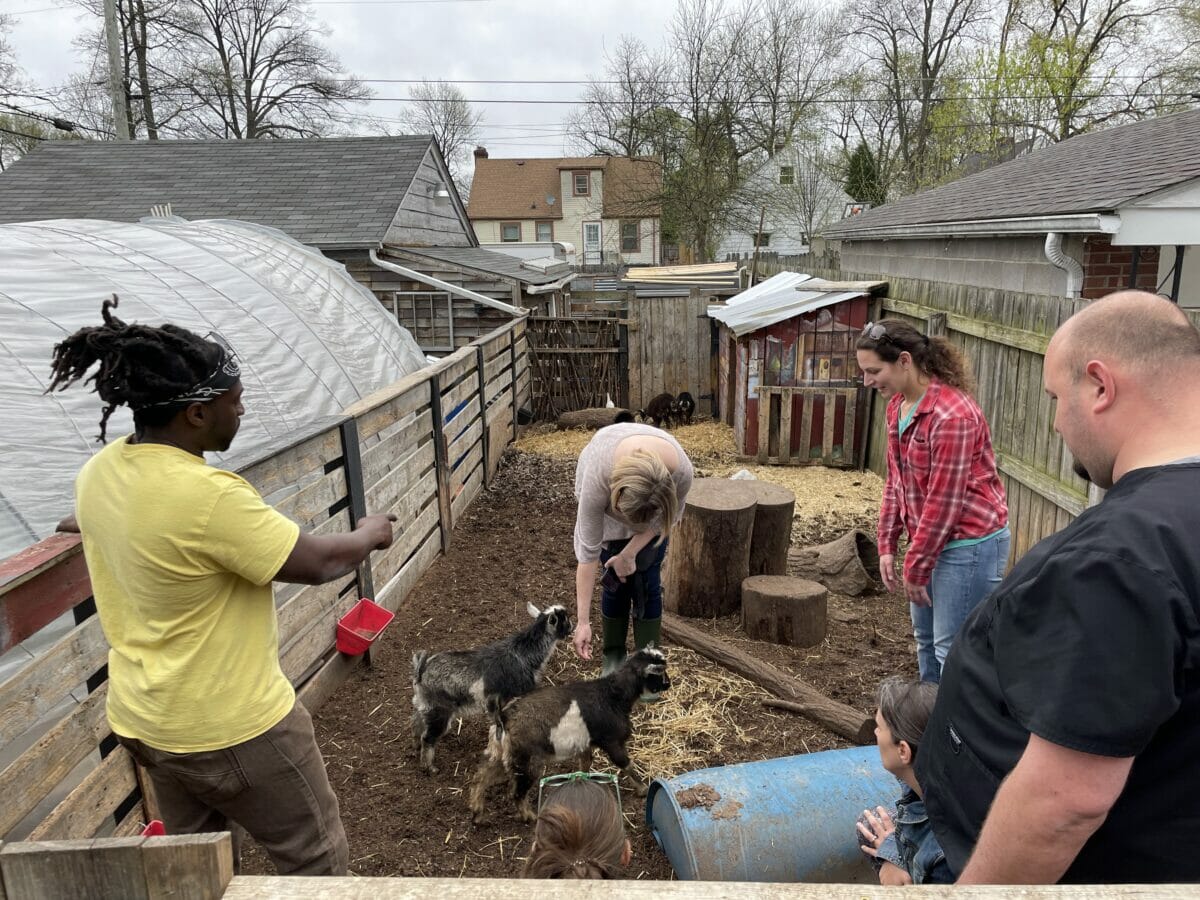 The network of urban farmers in Louisville continues to grow as inequities persist, with little to no solutions coming from on high. Marshall, Barnes, and other urban farmers have formed coalitions such as Food In Neighborhoods to get local politicians to hear their food access concerns, with mixed success. Marshall has made headway despite the typical urban planning concerns about land development and pest control.

“I have had some great conversations with local leaders that want to learn more about urban farming and what is necessary for farmers to succeed,” she says. “[Food In Neighborhoods] has had some great wins. We are now working on getting the metro government to reestablish a food policy advisory committee.”

While progress is slow, it is possible. As recently as 2021, Louisville Metro Council moved to strike portions of the historically discriminatory Land Development Code that penalized small urban farms. But that’s just one barrier to urban agriculture. For many would-be farmers, getting access to government-held vacant lots is the first hurdle they have yet to overcome.

RELATED: This Urban Farm Is Small But Mighty

City officials have prioritized housing projects over planned green space as part of a push to address a housing security need that the COVID-19 pandemic exacerbated. Housing was also the chief priority in spending under the federal American Rescue Plan Act that was designated to alleviate the impact of COVID-19 on American cities. When housing developments are such a high government priority, there’s little room—in budgets or in the city itself—for urban food production.

“There are people out here willing to [grow], let them do it,” says Marshall. “Let them do it before someone comes from California or the South who doesn’t know the area and buys the land. Give the residents the opportunity to continue to build a legacy and thrive in their neighborhoods.”

Barnes agrees that land access is a barrier to creating sustainable neighborhoods. “Land can’t be created, it can only be purchased,” he says. “The land bank has these properties, but we have developers that want to develop the green space…for profit. Sometimes, developing land doesn’t have to be for profit. It might just be for the benefit of humanity. Why not plant a tree, or create an edible green space so members of the community can grab something and go about their day?”

While politicians debate the merits of green space and activists raise concerns about being left behind, the community grows on. In backyards, in plastic tubs, in small pots on windowsills, urban farmers nurture the seeds that will feed them in turn. “When you cut off Walmarts and Krogers from certain neighborhoods and prevent people from growing…what else are you gonna do?” asks Barnes. “Fast food? A liquor store? That’s not real substance. That’s not nutrition.”

Despite the challenges, LeTicia Marshall draws hope from the strength that she sees around her. “Recently, with the Black Lives Matter movement…that was a global movement. And the changes that came about—not all of it pretty— gives me hope. To know that everybody across the country, when we feel some type of way and enough is enough, we will figure out how to make it work and create a movement that is so big and so incredible that you at least have to think about it. And I hope that people would be moved to change because of that.”

Awesome dedication!!! It’s people like y’all that make a difference in neighborhoods like yours- I feel for you -not that where I am is any better -but what I’m saying is that you are putting in 300% and the biggest thing is battling the red tape and government bureaucracy…things have got to change…when junk/processed food is cheaper than healthy fresh/frozen food and large food corporations are continually adding more “convenience” foods, which means more smaller non-biodegradable packaging on the market rather than figuring out a way to educate and enable people to buy in bulk or make or grow and… Read more »