After years of dreaming, the owners of a Georgia restaurant known for its raw bar finally made waves in growing their own bivalves. 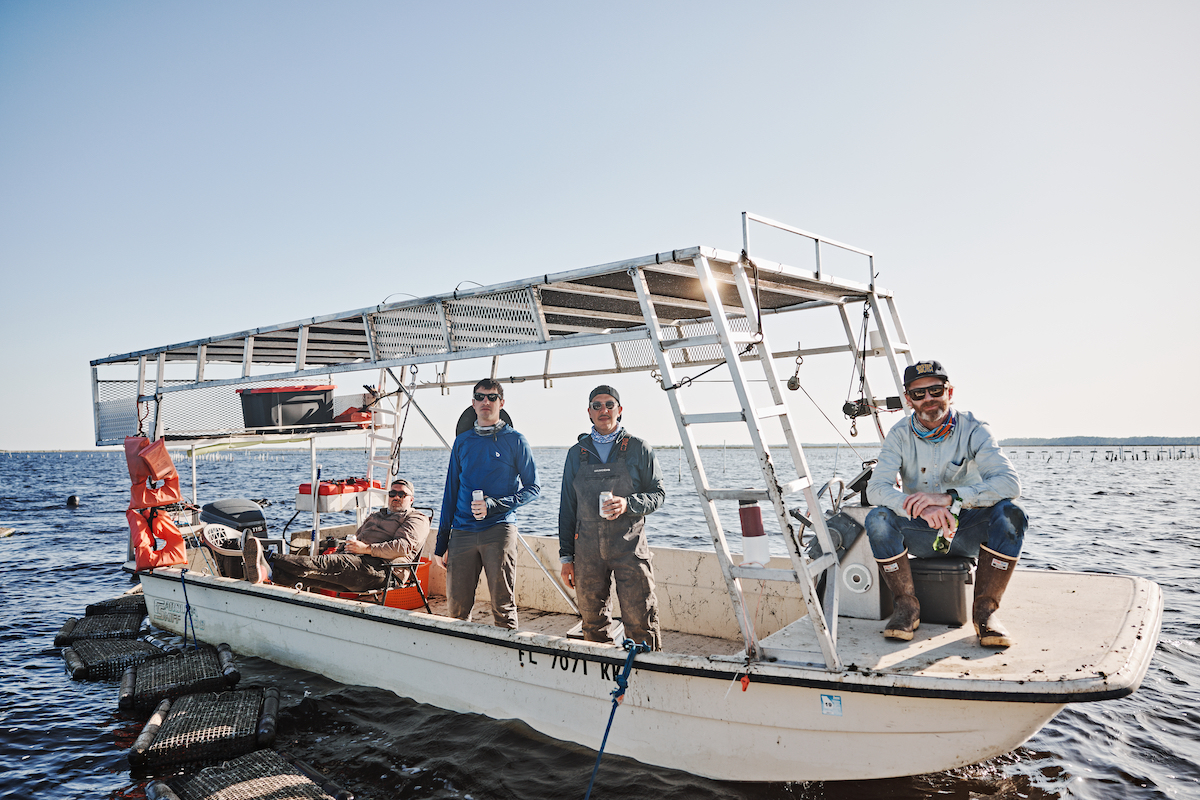 “You want to hear it was like some magical movie moment with sun breaking through the clouds?” says Bryan Rackley. He’s recalling last April, when he and his partners harvested their first batch of oysters from their brand-new farm off Florida’s Panhandle, where, after years of planning, they’re finally cultivating premium bivalves, branded as Shiny Dimes. “It wasn’t; it was intense work. But, still, it was amazing.”

Rackley, along with Miles Macquarrie, Jesse Smith and Matt Christison, started planning for the oyster farm in summer 2019. When the pandemic slammed the door on their plans the following spring, they were disappointed but kept working their other jobs. The friends are all partners in Atlanta’s Kimball House, a restaurant they dreamt up while working together at a local bar. They all still work at Kimball House, managing operations, shucking oysters and making drinks. The restaurant is lauded for its diverse selection of oysters (with detailed tasting notes for each), which are offered alongside a host of both creative and classic cocktails.

Then, in mid-2021, a window of opportunity opened. “A guy who was getting out of oyster farming offered to sell us all his farm gear,” Rackley says. “We thought, OK, this is our way back in.”

RELATED: Can Oyster Farming Save the North Carolina Coast?

They had their second chance, but that was about it. Despite the restaurant providing more than the average person’s understanding of oyster aquaculture, the guys knew next to nothing about the day-to-day business of running an off-bottom oyster farm. “That was a real challenge,” says Rackley. “We didn’t know how to do anything.”

While oyster farming allows for control of certain variables, such as being able to harvest them when they reach the perfect size, farmers are still hand-raising something wild and remain subject to Mother Nature’s whims. And for the Shiny Dimes team, just figuring out how to start and park their boat took some time. 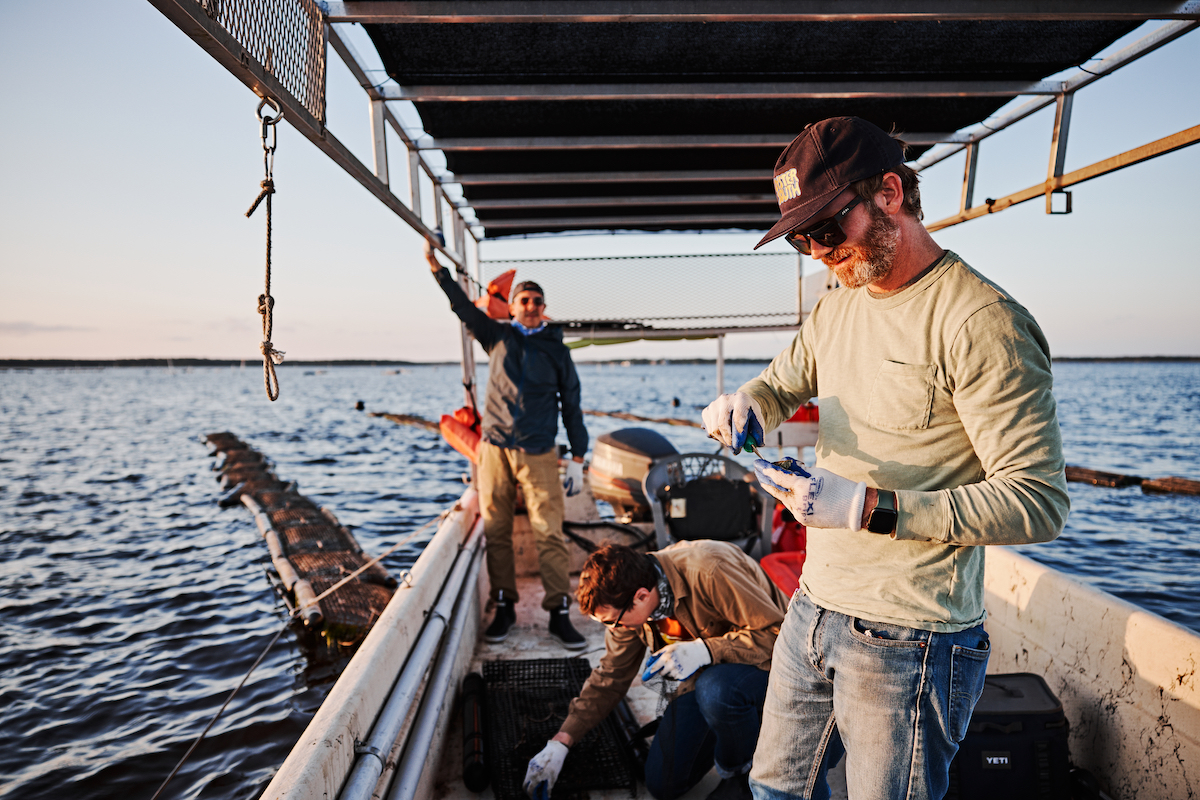 They did finally park the boat and got the rest of it done, too; the old friends rely on their combined individual strengths to fill necessary roles at the restaurant, and the same is proving true on the farm. But Christison stresses they did not do it alone. “The oyster farmers right next to us, Dewey and Jody and Houck of Cypress Point Oysters and Cainnon Gregg of Pelican Oyster Company, have been so helpful and generous,” he says.

Without their guidance, Rackley says their farm would have failed. “In hindsight, the pandemic made the timing just right,” he says. “It meant we ended up doing it next to these guys, and we couldn’t have done this without their coaching.”

On that April day, when they pulled their farm’s inaugural baskets of bivalves from the warming waters, Rackley was astonished that they’d successfully grown any of the mollusks to maturity. “We’re so new at this, I was kinda amazed we kept them alive. Then, Matt was driving them back to Kimball House for their debut and got a flat tire, so that was stressful,” he says. “And when we got to the restaurant with them, I had daydreamed about cheers and showers of Champagne, but nope. It was a busy night. We got to work like usual—shucking and serving hundreds of oysters. Only this night, some of those oysters were ours. That was pretty special.” 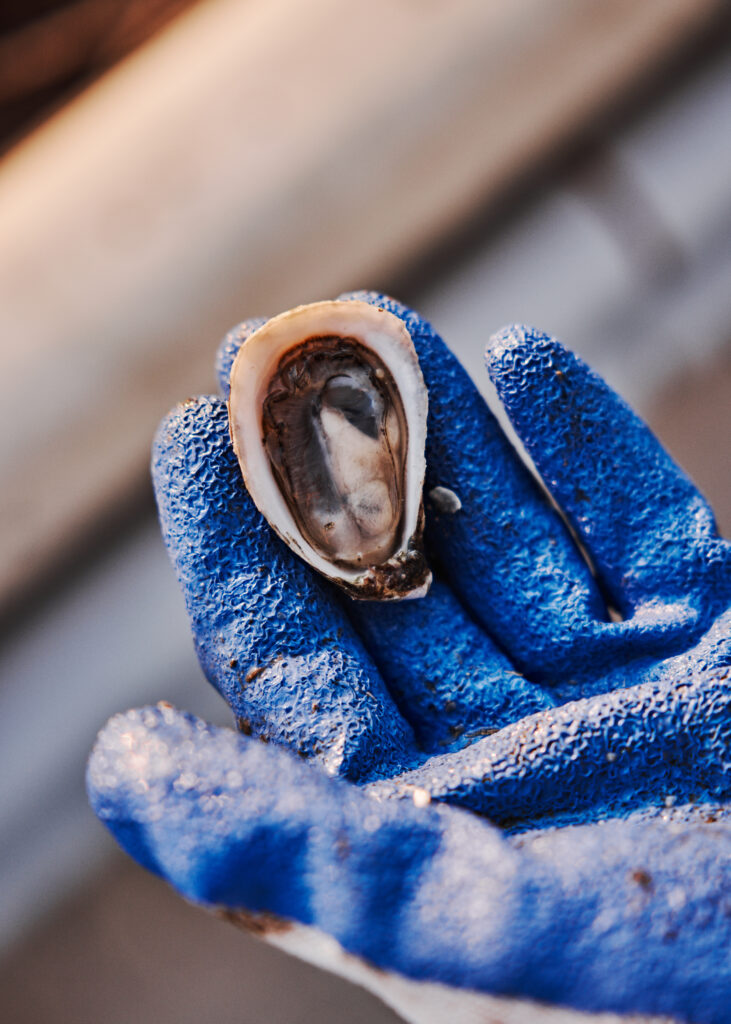 The Shiny Dimes oysters are pretty special, too; only a few months in, and bivalve lovers are enjoying them at Kimball House and other local restaurants are giving rave reviews for their petite size, tender texture, balanced salinity and herbal notes.

Still, diving cold into a new profession while dealing with pressures and challenges that every oyster farmer faces and making the five-hour drive between Florida and Atlanta every other week when you already own a successful restaurant begs the question: Why?

To Rackley, the answer comes easy. It’s a natural extension of the passion for oyster aquaculture he and his partners have shared since opening Kimball House. “At the restaurant, we’ve always tried to shorten the distance between the oyster on the plate and the farmer who grew it,” he says. “To do that, we buy our shellfish directly from farmers, and I’ve established real connections with these great people. The more exposure I got to who they are and what they do, the more I wanted to do it myself.”

The environmental benefits of oyster farming also hold appeal. “We all feel strongly about the ecological value of oyster farms,” he says. A single oyster can filter up to 50 gallons of water a day, and an off-bottom farm’s setup creates habitat for other marine creatures. Simply put, more oysters in the water means healthier bays and oceans.

RELATED: Oyster Farming May Be Even More Environmentally Friendly Than Previously Thought

And with Kimball House already a known name in the world of oyster lovers, Rackley says the restaurant getting hands-on with farming will improve their ability to promote the oyster aquaculture industry. “Creating our own farming story provides a vehicle to tell the whole oyster farming story in a more compelling way,” he says. Christinson adds: “We’ve been on the other end of the supply chain, but now that we’re doing this, our appreciation for oyster farmers, which was already pretty great, has deepened, and we can spread that.”

The team’s personal love of oysters also serves as motivation. They’re edible, but oysters also offer an experience. “Oysters are a powerful food; I remember my first one. I was five years old at some dive in Panama City Beach with my dad,” says Rackley. “I loved the cocktail sauce, the cracker crunch, the seawater taste, but eating them with my dad, it was a bonding moment.”

Rackley says oysters do the same for others, providing a passport to another time or another place. “They trigger nostalgia; they taste of where they were grown. I love eating them; I love serving them to others and sharing the stories behind them,” he says. “And now, I love raising them.”