Forget the picture-perfect garden photos. Instead, turn to this Facebook oasis of crappy yields and disappointing starts. 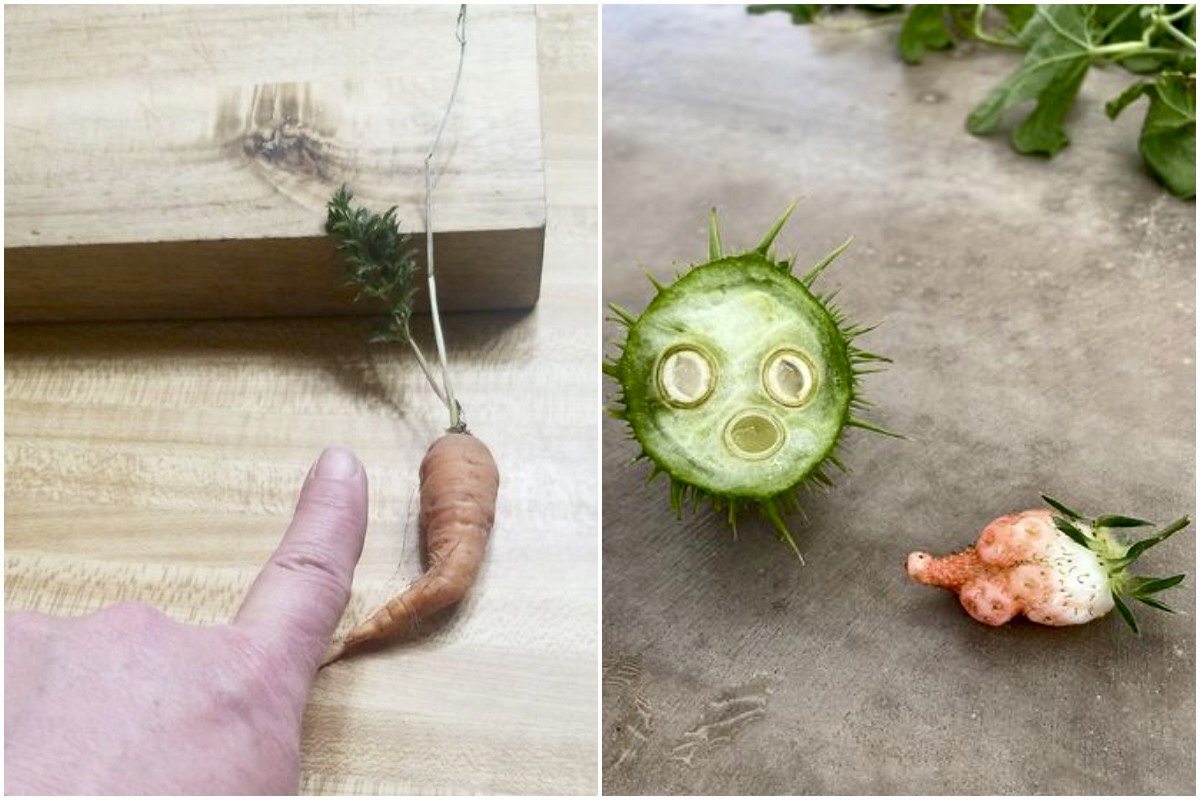 There’s a particular feeling—a mixture of astonishment and smug satisfaction—that pops up the first time you successfully grow something. Whether it’s plucking a perfectly red tomato from your very own vine or seeing that first hint of a spring crocus breaking through the lifeless dirt, the feeling comes on strong.

This story is not about that feeling.

This story is about all the tomatoes that drooped, mealy and green, from a sad, yellowing balcony plant. It’s about the crocus leaf you find desiccated after a deer got to it first. This is for all of your farming and gardening failures, which deserve a moment in the spotlight. And where else to celebrate those momentous non-achievements but the Facebook group called Shitty Harvests?

“What else are you gonna do? Just sit and cry?” asks Anthony, a gardener and group member from Minnesota, who says that, after a good commiserating laugh, people will chime in to help. “Hey, kudos to you on a terrible failure. Big high five! But also, have you tried this?” 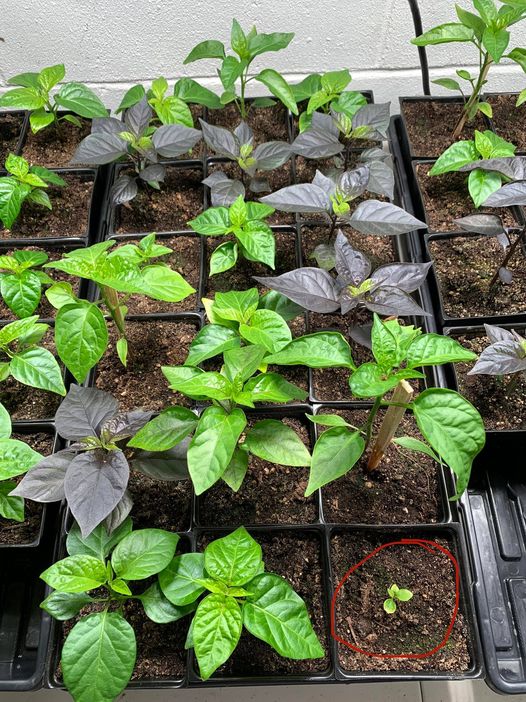 Shitty Harvests boasts more than 53,000 members. And these are incredibly active and engaged members. They post pictures of their wonky carrots, their laughably small potatoes, their miniature strawberries. They ask for advice and share what worked—and more often, what didn’t work. The group isn’t just a font of information for gardeners of all experience levels. It can also be a reminder that things are OK. Your cucumbers failed, but you’re doing fine.

“There’s the reassurance in other peoples failures; this isn’t just me. This isn’t just my climate. This is just how hard it really can be,” Adrienne, a member from Southern California, says. “It’s nice to have this unpretentious group. I’ve learned a lot, even though we’re all supposedly a bunch of crappy gardeners. It’s a judgment-free zone.”

Adrienne joined the group when she and her husband attempted to grow a salsa garden. They are both interested in off-grid living and like the idea of producing their own food. She says that even though she knew gardening was tough, there was always the idea that it was really just as simple as seeds, water and time.

So, how did the salsa garden do? “Oh, it didn’t. Our tomato plant got about nine feet tall and produced two tomatoes. And then we got hornworms, which are the craziest-looking things,” Adrienne laughs. “We have four pepper plants that are alive, but they’re all shriveled. One has no leaves and three sad jalapenos on it. We had a gopher eat half of the other pepper plants. So, we got about four quarts of salsa out of a year of work.”

Despite the continual frustration, Adrienne says the community she’s found in the Shitty Harvests group is part of why she’s stuck with the garden. “It’s fun to see what happens next and adjust and problem solve.” That feeling is echoed in the posts throughout the page, as people share why it’s important to thin your seedlings or how to keep the racoons away.

For Annie, a novice gardener of only three years living in southern Utah, the group helps her keep a sense of humor about her efforts, like Steve, her avocado tree. A single leggy shoot, pushing upward from an old coffee can, Annie has been trying to get Steve to grow for years. Unfortunately, things aren’t looking great for him. So, Annie pasted some googly eyes on Steve and shared the picture with the group. “I don’t think Steve’s going to make it, to be honest,” Annie jokes. 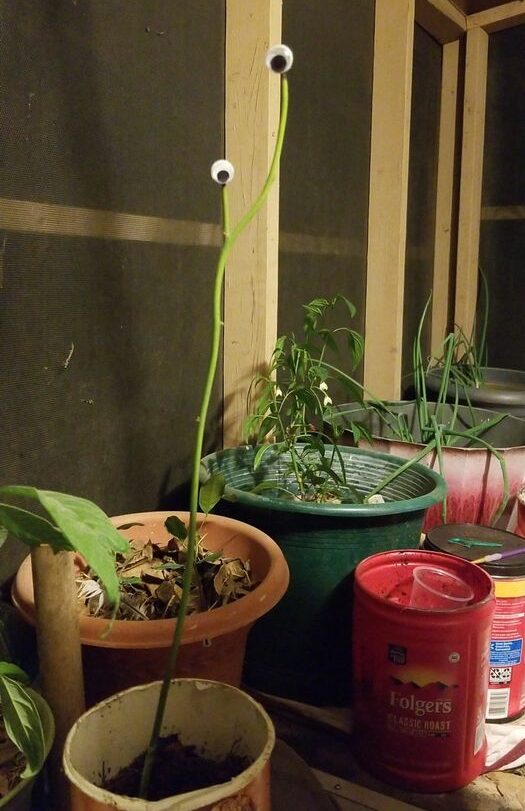 But why go public with these failures? Annie could have just as easily tossed Steve to the compost bin and never looked back. Why post about it on the internet? “It’s funny to share,” she explains. “For the first two years, I really didn’t have anybody to share with. I would have loved [this group].” This community, varied in geography and ability, is an important connection point for many home gardeners. It’s a chance to show that you’re trying and to feel validated for doing so. You may not always succeed, but it’s the effort that counts.

Still, Annie’s learned a lot from Steve’s failure to thrive. Annie describes herself as a “hazard gardener,” throwing ideas out and seeing what works. “Every year that I have success with something, I feel more confident in my ability.”

That’s a feeling Anthony knows well. A self-described masochist, he mainly grows hot peppers, even in his cold Minnesota climate. After starting his garden with common crops, he found some basic pepper starts at his local nursery. He grew a few habaneros, a few serranos and found some success. It spurred him on. “Over the past few years, I went further down the rabbit hole into the hot pepper world, collecting more exotic seeds and working on my indoor germinating game,” Anthony says. “Then, I got into fermenting food and hot sauce. And this year, I’m doing some powders and seasonings.” An early success has led to a whole garden of pepper pods, just waiting to be picked—that is, if the deer don’t get to them first. In the Shitty Harvests group, Anthony has posted about the wildlife decimating his strawberries and his failure at getting his indoor seedlings to germinate. Each time, he shares a moment with the group to offer up a bit of collective laughter, a cathartic moment. But it’s also to encourage others to give gardening a try, despite the relative hardship.

“During the course of COVID and lockdowns, there’s a scarcity of food and inflation keeps going up. People are finding the benefits of at least attempting to grow their own food, and seeds are flying off the shelf,” Anthony says. He’s happy to welcome each and every new gardener to the flock. “It’s great. There’s a whole new crop of people epically failing at gardening.”

Failure that makes garden yields better, that’s also what I feel after failing from the first harvest, learning from failure. Even though at the beginning I was disappointed with good seeds, the results were not satisfactory, but gardening is a process of reaping the fruits of hard work

Every failure is one step closer to success. Never give up, always keep trying.