The Future of Farming in Space - Modern Farmer
Future of Food, Plants, Technology

The Future of Farming in Space

Why companies are looking beyond Earth for viable farmland.

As the global amount of arable land steadily decreases, some scientists and entrepreneurs are looking to the stars as the next great agrarian frontier. A concept as old as the first science fiction story, humanity’s escape to a life in space hinges on the ability to produce edible and nutritious food.

Growing plants in space is not a new experiment. Astronauts and scientists have already had success cultivating fruits and vegetables in space, such as ‘Armara’ mustard and pak choi. Last fall, seven mature Hatch green chiles were harvested. Speaking to the future of luxury space travel, a dozen bottles of Bordeaux were sent to age in space for 14 months before returning to be sold in a Christie’s auction.

A cacophony of recent events has further propelled the interest—and investment—in growing food in zero gravity, including a decrease in arable land, the failure of crops on land due to extreme temperature and weather events and the growing likelihood of human-guided trips to nearby planets in the solar system.

Now, a number of different companies are stepping up, hoping to lead the food production industry up the runway to space. 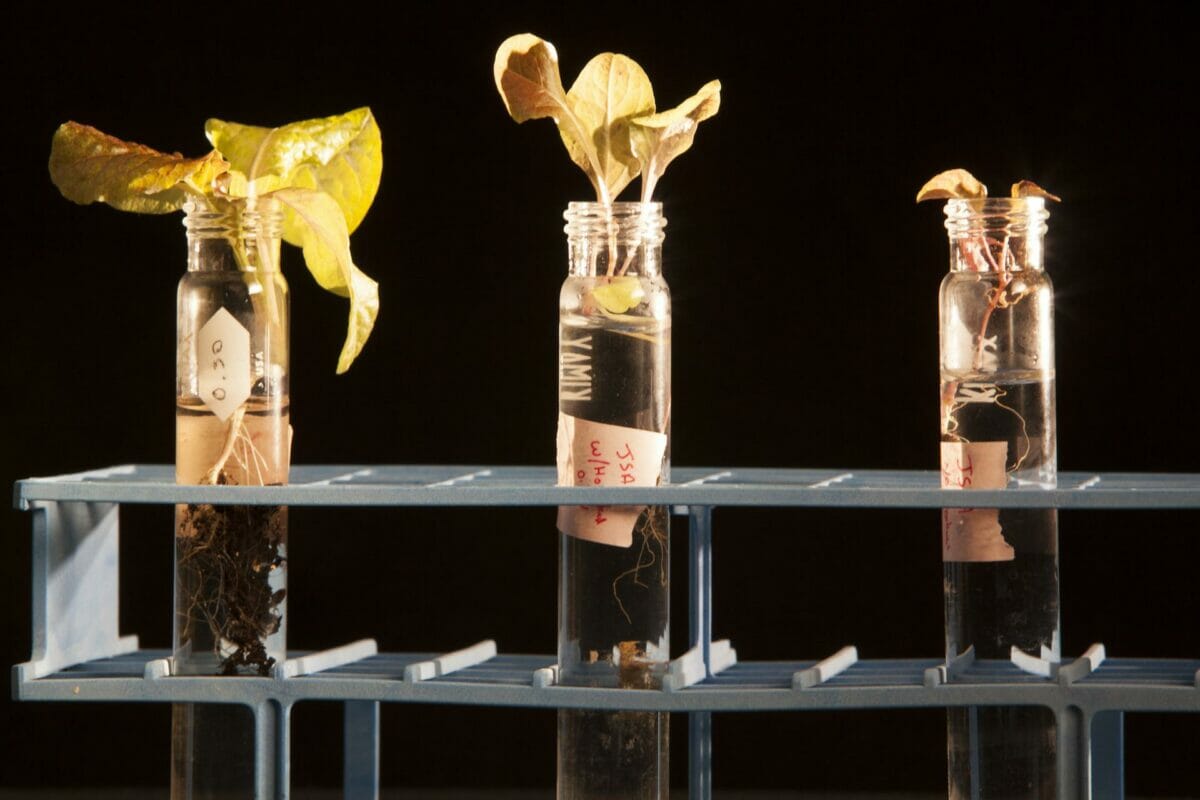 Orbital Farm is one company looking to the future. Still in a fledgling state, Orbital Farm hopes to transform terrestrial food production into a sustainable closed-loop system, making the eventual leap to space-grown produce an easy obstacle to overcome. CEO and founder Scot Bryson says that his company was born out of the desire “to tackle climate change.” And this makes sense. As climate change progresses, weather patterns will become more unpredictable and erratic, placing crops around the world in danger. These impacts will only intensify, says Bryson, due to the fact that nearly 26 percent of greenhouse gas emissions are released by the agricultural sector alone.

Beginning with a facility at the Virgin Galactic Spaceport America in New Mexico, Orbital Farm will work to integrate the mechanizations of industrial, large-scale agriculture within a sustainable system. This includes simulating the environment to mimic space conditions, including limited access to freshwater and oxygen, as well as building and continuously testing air carbon capture systems. Bryson says this is the only way forward, because “fifteen, twenty years from now, when we have large numbers of people living…on Mars, you need large-scale systems to support life.”

In that vein, chickpeas are already beginning their testing trial in space. An experiment named “Space Hummus” commenced with Northrop Grumman’s 17th supply mission to the International Space Station (ISS) on February 19. Yonatan Weintraub of Stanford University, the scientist who developed the plan for Space Hummus, cites the nutrient- and protein-dense nature of the legume as a leading factor to explore its potential for growth in space. Housed in a miniature greenhouse, chickpea growth will be monitored by scientists aboard the ISS. 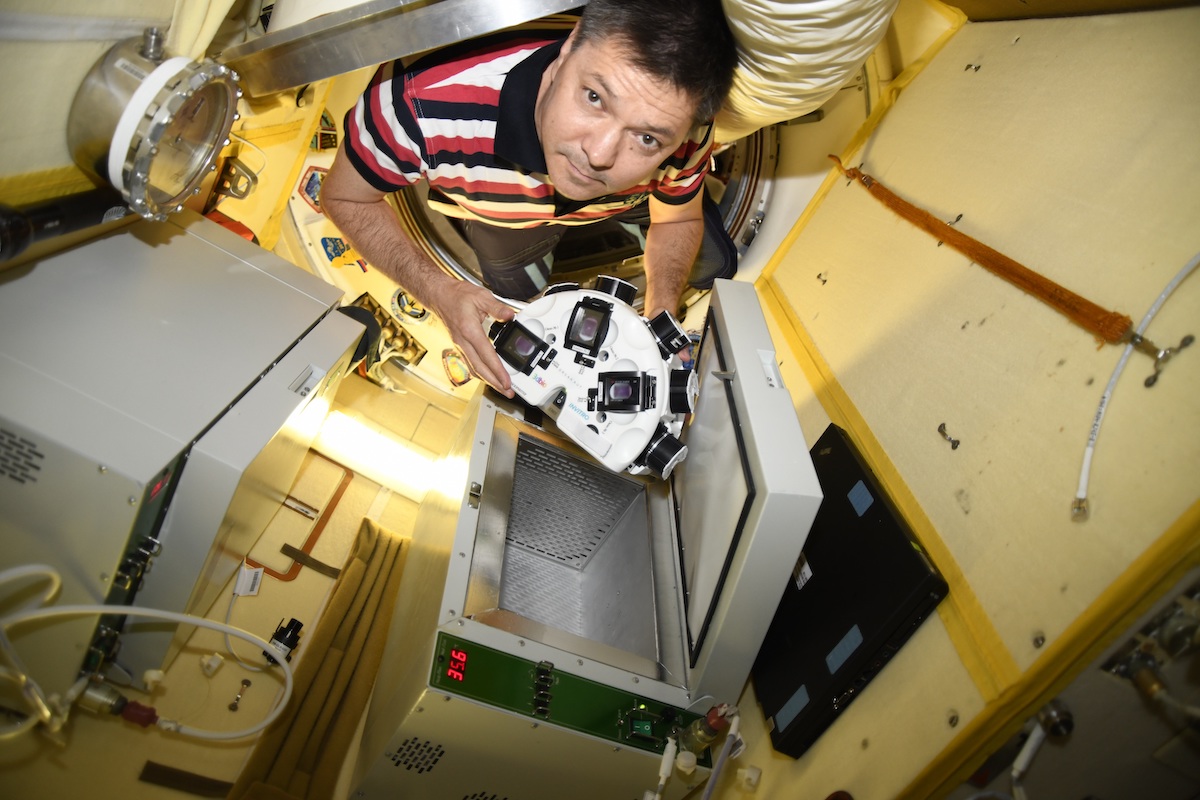 Cosmonaut Oleg Kononenko on board of the International Space Station during the first experiment with a 3D bioprinter. Photo courtesy of Aleph Farms.

Back down on Earth, Aleph Farms, based in Rehovot, Israel, is also betting on food grown and cooked among the stars, but not just vegetation. Well known for cultivating the first piece of meat in space, Aleph Farms has out-of-this-world plans for future proteins. Zvika Tamari, head of the company’s space research program, believes that cell-cultivated meat will become an integral aspect of long-duration missions to Mars and potential Moon outposts. “Supplying fresh food from Earth to the Moon and Mars…is just not going to happen,” says Tamari. So Aleph Farms is determined to make cultivating and cooking meat in space a plausible reality for the future of space travel.

In lieu of attempting to blast a cow to the moon, Tamari says that Aleph Farms is working in partnership with the ISS to “examine the effect of microgravity on…cell proliferation and differentiation.” Cell proliferation and differentiation act as the foundation for all muscle tissue formation, so understanding the impact that a lack of gravity has on these two processes is crucial to normalizing the practice of meat grown in space. While the astronauts on the ISS conduct these experiments, analysts will monitor the progress from Earth, reacting and editing theory and practices in real time. All of this is to say that the future of growing meat in space for long-term missions is no longer a concept regulated to our favorite episodes of Star Trek but rather a real viability gaining steam and traction.

[RELATED: What Would It Take to Feed One Million People on Mars?]

Additionally, Tamari briefly touches upon the psychological impact of long-duration space travel, bringing up the idea that astronauts visiting Mars will undergo years in space and may ultimately never return to Earth. Acknowledging this mentally and emotionally draining possibility, he posits that “the ability to be involved in preparing your own [food] and growing it and seasoning it by your taste…is extremely important for the well-being of astronauts.”

NASA seems to agree with Tamari’s take. Isolation and confinement are ranked second among NASA’s list of five hazards of human spaceflight, with the agency acknowledging that a lack of access to consistent fresh food could contribute to “psychological or physical imbalance.” So the market for technology that can provide fresh and tasty food in space is more important than ever.

Aleph Farms and Orbital Farm both agree that the more diverse a set of minds working toward growing food in space, the more likely it is that humanity will be able to solve pressing food-related dilemmas—both on the ground and in space. Food security and dwindling resources, both accelerated by the climate crisis, are posing challenges for the future of food production. Many believe that to grow food successfully in space, humanity must simultaneously understand the practice of sustainable food production on Earth.

To this end, NASA and the Canadian Space Agency recently announced the second leg of the Deep Space Food Challenge, a competition with a $1-million dollar prize that seeks sustainable food technology for use in both terrestrial and inter-planetary settings. Boasting the tagline “Good food for healthier, happier humans in space and on Earth,” NASA is challenging teams from all over the world to submit cutting-edge ideas that could sustain long-duration space missions and improve the environmental impact of food production on Earth, increasing access to sustainable food. Phase 1 winners include ideas such as Bistromathic from Austin, Texas, a potential technological option that “ensures astronauts enjoy an Earth-like experience of eating during long space missions,” or SIRONA NOMs from Golden, Colorado, a “small-scale bioregenerative system that grows a variety of fruits, vegetables, herbs and fish.”

Moving forward, we can expect to see innovative technologies that will usher in the next 50 years of sustainable food production in space and at home. Experts from around the globe are exploring new and exciting methods to grow many food options in any environment. However, the future of intergalactic food is entirely dependent on Earth in the present day: Humanity needs to understand how to grow more with less. Only upon mastering this conundrum can we expect to explore the Milky Way while enjoying a kale salad and beef tartare.

Very sad to know that this is even a thing. We see too much effort being applied to doing things in space when we have so much to remedy here on our own planet.