How My Toddler Reminded Me of the Joys of Composting - Modern Farmer
Lifestyle, Personal Essay

How My Toddler Reminded Me of the Joys of Composting

It can sometimes be messy, but composting with kids helps introduce them to sustainable living—and makes it feel like less of a chore in the process. 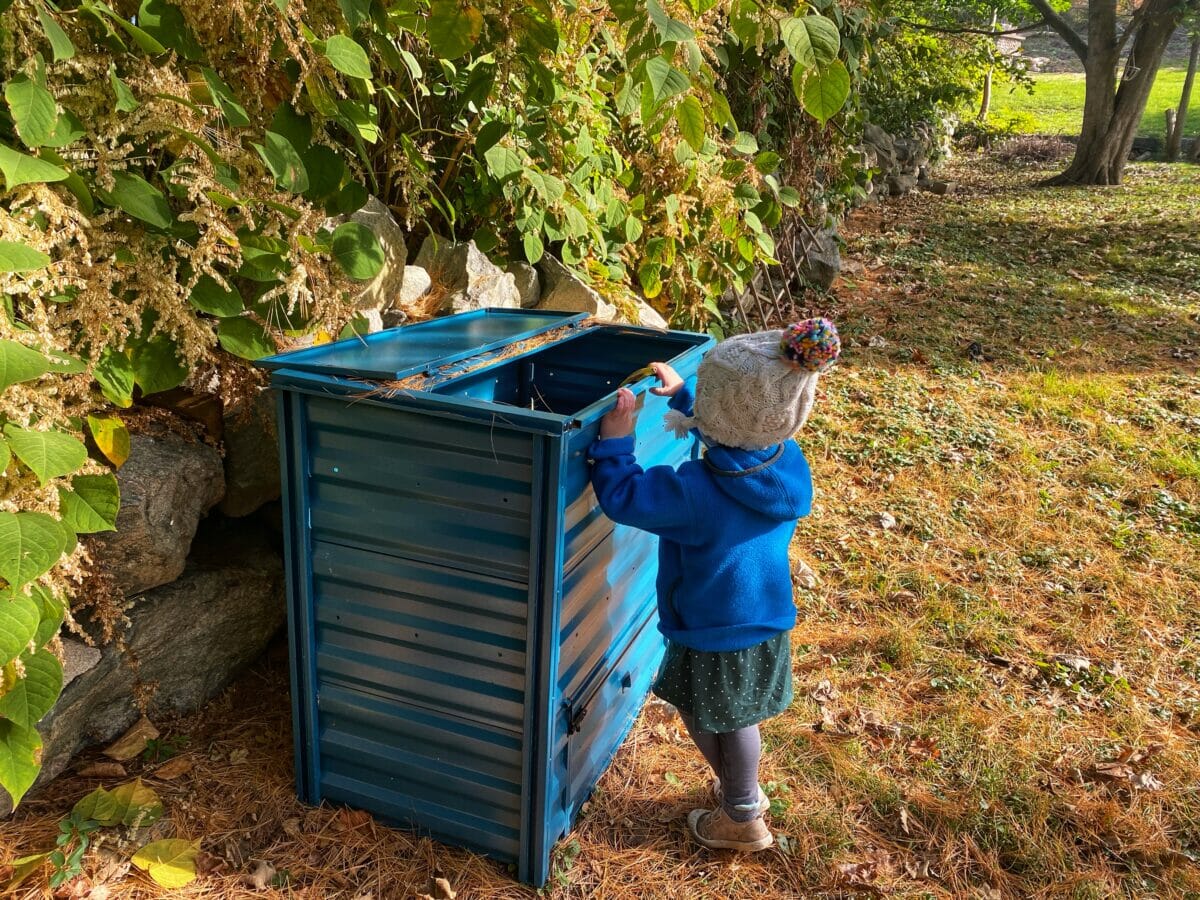 My toddler and her friend looped across the yard in the half run, half skip that only kids can seem to do. Watching them squealing in delight, hands gripped tightly to their watermelon rinds, shouting, put it in the compost, put it in the compost, I was suddenly glad I had spent the previous week struggling to assemble the blue metal compost bin.

Once upon a time, composting was such an ingrained habit for me that I scooped food scraps into a countertop bin after meals or while cooking without even noticing I was doing it. But like swiping on Olio E Osso cheek and lip balm before I left home, composting was a routine that quickly disappeared from my life in the early days of the pandemic.

When New York City officially shut down in March 2020, I was visiting my parents in Mystic, Connecticut. They don’t regularly compost, so neither do I while staying with them. Without a reason to go back to our New York City apartment, and with a thousand reasons not to, we stayed. As March turned into April and then May, my daughter and I moved into the house, located in the same village, that I had slowly been restoring for more than five years. There, I struggled to compost again. Part of that was due to just how overwhelming starting a compost felt. New York City, after all, makes it easy with its free composting program. If your building is signed up for curbside compost collection, you can collect food scraps and put them in your building’s brown bin. You can also take your own scraps to one of the many conveniently located dropoff sites.

Outside of the city, I would have to maintain my own compost pile, making sure to layer food waste with organic yard waste, turning the pile and watering it. But another aspect of why I dragged my feet with composting in the suburbs was an unwillingness to accept this new life—maybe we’d move back to New York City or perhaps we wouldn’t, but maybe we wouldn’t stay here either. To compost was to commit. It was putting down roots.

Yet not composting nagged at me. It was an item on my internal to-do list I was failing to accomplish. And the organic waste we were tossing in the bin—which I knew would end up buried beneath trash in a landfill, rotting and emitting greenhouse gases that harm the planet—left me feeling anxious and guilty. As my daughter got the hang of which items to recycle and which to trash, and as we reached our second pandemic spring, it seemed essential that she also learn how and what to compost. She quickly fell in love with the idea of how her trash could help create new soil to keep the three trees we planted in the yard healthy. She loves those trees, and she wants to water them and check to see how they’re growing on a daily basis.

Actually composting was the part I was most intimated by. I considered one of the many different countertop compost bins on the market, but in my new-to-me old home, I have yet to find one that meets my aesthetic needs and doesn’t smell. So I use compost bags that stay in the freezer until they’re full, at which point we take them to the yard bin. 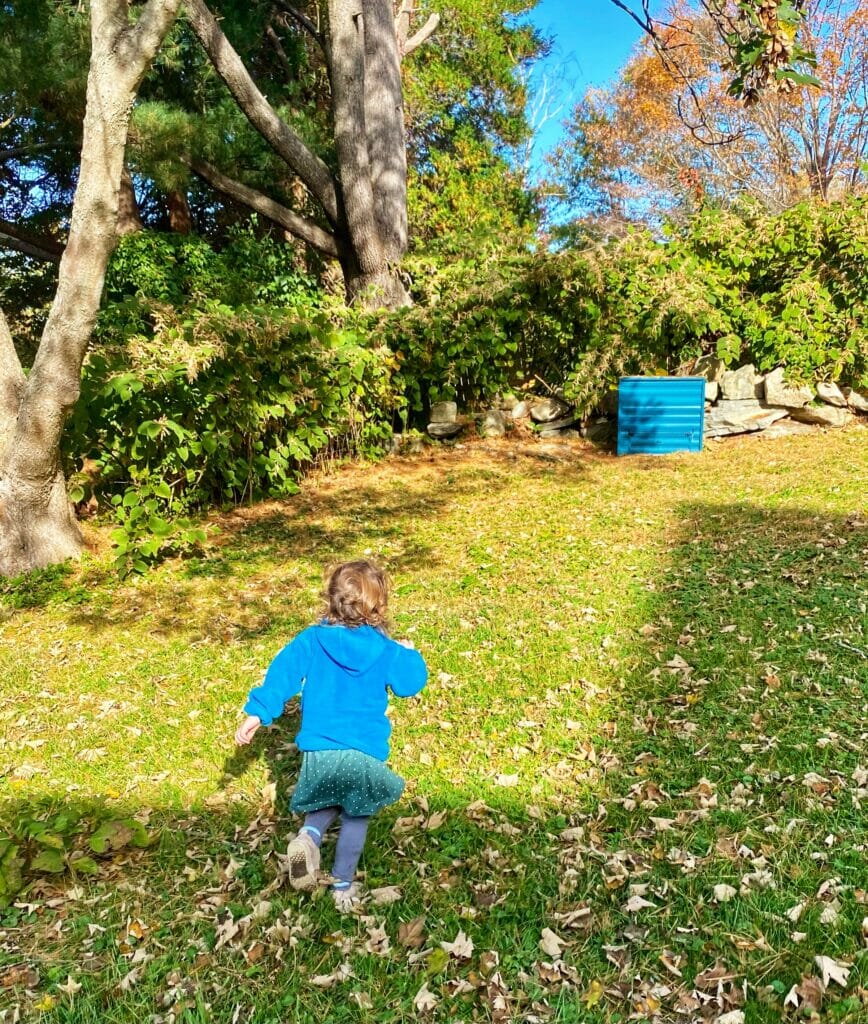 As for the actual system we were to use, I looked at a ton of different options, from burying it to the popular Subpod Compost System. Yet, I wanted my daughter to be able to observe the process of composting, and it gets cold in our little part of the world; I wasn’t convinced a worm-based system would work well year round. So, wanting a nonplastic yard compost bin, I opted for the Demeter Metal Compost Bin, which, other than being a challenge to assemble, has worked well. One to two times a week, we dump our food scraps in it, alternating layers with yard waste we collect, and she loves watering it almost as much as watering her trees.

Composting with a toddler is messy, but it’s a great task to start at any age, whether you’re two or 42. It can be as straightforward or as complicated as it needs it to be. For children, it’s one more way for them to connect with nature and give them agency over the environment. Plus, it helps them learn how to be a contributing household member through the responsibility of chores.

As we started talking about soil and how it helps the trees she loves to grow, composting felt less like one more to-do item and more like creating a home. We talked about how organic material such as her beloved blueberries can help break down into soil. Throughout the day and especially on walks, I’d point at different things and ask if it was something that she thought could become soil or not. It became a type of game. With older kids, you could talk more in terms of organic versus non-organic material. And if you’re prone to creative organization, another way to do this is to make different bins labeled with pictures such as a strawberry for the compost bin or separate them by different-color bins for dried leaves and twigs, food scraps and non-compostable materials.

As my daughter gets older, I’ll have her cut up the scraps of organic material with a designated pair of compost scissors, but for now, I do the cutting while explaining how, just like we need to chew our food, the compost needs small pieces to work well. As she grows and watches the waste decompose, I’m hoping it will fuel her curiosity, leading her to want to compost more and learn more about the world around her. At the very least, throwing compostable snacks in the bin with a friend has become a joyful activity to look forward to, of which there were few during the peak lockdown days.

Composting is actually much simpler than this article makes it sound. I know, because I compost all compostable material. And if it includes meat, I run it through my dogs and then compost the output. No plastic bags, no bins, no rotating wazoos. A three-high unconcreted bin of cheap cinder blocks. Seeded a few years ago with some good dirt from a neighbor’s garden and now it lives on and eats everything. I live in a place with lots of citrus, and of course the skins/rinds go in the compost. I have been told several times that they don’t compost.… Read more »