Maria Palacio, who comes from a long line of coffee producers, is working to rebuild equitable coffee supply chains—one bag of beans at a time. 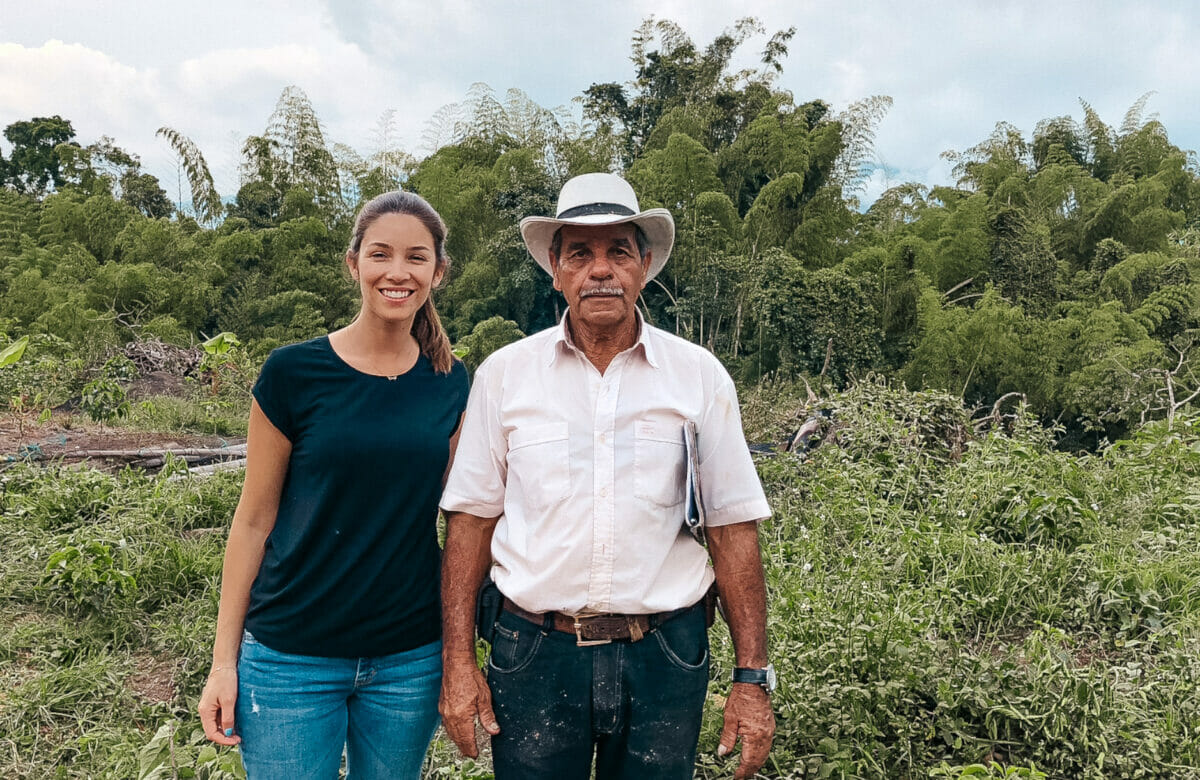 Nearly a decade ago, Maria Palacio left the lush green fields of her family’s coffee farm in Colombia in search of new opportunities in New York City. She hoped to pursue the fashion career of her dreams. But amid the hustle and bustle of working for high-end designers such as Marc Jacobs and Alexander Wang, the fifth-generation farmer was struck by a culture of obsessive caffeine guzzling that tugged at her conscience.

“Everyone in New York was happy to pay more than five dollars for a cup of coffee, while I kept thinking about my family struggling to make a profit and hold on to our farms. It didn’t make sense,” she says. “Everywhere I looked, people had a Starbucks cup in their hand…This was a market that was growing and booming, but nothing was changing at home.”

In 2012, after her father lost the last of his five coffee farms, Palacio started thinking about how she could bring change to her home country’s coffee industry. By 2015, she quit her job as a production and development co-ordinator at Alexander Wang with a goal to establish a new company that would better compensate Colombian coffee growers. 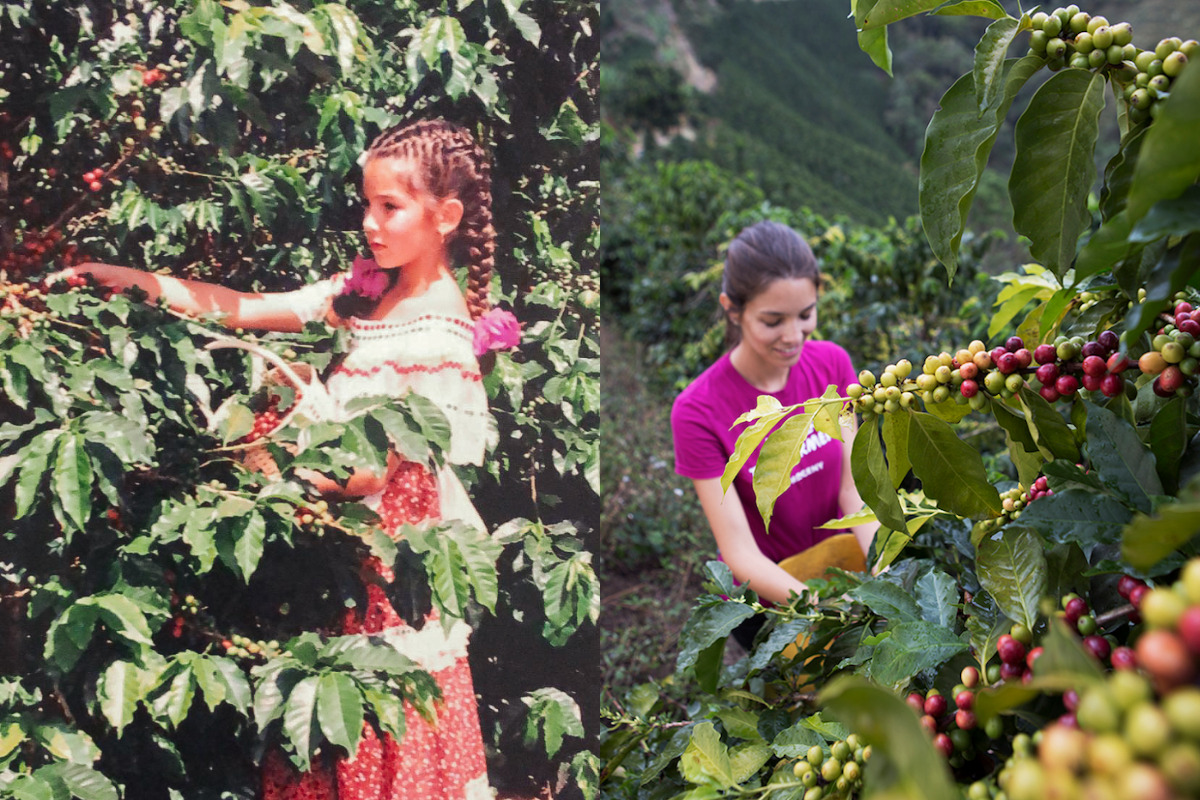 Maria Palacio, then and now. Photo courtesy of Progeny Coffee.

One year later, Palacio founded Progeny Coffee with her husband, John Trabelsi. Since then, the couple has worked with around 40 farmers throughout Colombia’s coffee belt in the regions of Caldas, Risaralda and Quindio (where Palacio calls home). This includes her late grandfather’s farm, which was passed down to her mother. Palacio says that, to date, Progeny has been able to provide all partner farmers a living wage, even doubling the income for more than 25 of them.

“It’s been a beautiful moment being able to change a narrative for a community and a country,” Palacio says. “For so long I carried this story that things in Colombia were hard and would stay that way…But if we don’t take care of the farmers, who is going to produce our coffee or our foods? This is about building a new generation.”

According to 2018 data from the Borgen Project, Colombia has a poverty-stricken coffee sector, with farmers living on an average wage of less than two dollars a day. After four years of conducting her own research, Palacio has found that the country’s farmers produce about 15 percent below margins. Those numbers have kept her motivated to move forward, to improve farmers’ output and livelihood.

Palacio’s involvement has helped Colombian farmers transition out of the Arabica commodity market to create specialty Caturra and Castilla varieties oozing with flavor note combinations such as caramel and milk chocolate, pear and clementine and camomile and cinnamon. The 12-ounce bags, personalized with the faces, names and stories of the farmers who produced them, range from a price tag of $17 to $23.

Normally, growers in Colombia’s commodity coffee market don’t know the price they’ll receive for their coffee until they bring it to the buyers. Instead, Progeny offers farmers a fixed-pricing model, providing them a degree of certainty about how much revenue they’ll receive based on the grade of their coffee. Through the company, the farmers also navigate a supply chain of three parties opposed to 10 in the traditional market. This eliminates unnecessary middlemen, Palacio says, who take much-needed revenue from farmers.

To date, Progeny has been the coffee supplier for a rolodex of Silicon Valley tech giants, including Google, Facebook and LinkedIn. The company also sells direct-to-consumer through its online store. Beans can be bought by the bag or through an “adopt a farmer” program, wherein customers can support a farmer of their choice through a coffee subscription.

Using her grandfather’s old farm as an innovation hub, Palacio is also trying to demonstrate to partner farmers how they can use practices grounded in sustainability and environmental stewardship. This includes providing training in the development of zero-waste systems, improving soil health and reducing water consumption by up to 90 percent.

Overall, she hopes that she can shift consumer attitudes around coffee and be a guiding light for producers. Once she’s tackled Colombia’s coffee sector, Palacio says she’d like to move on to other regions grappling with the same problem.

“This is the opportunity to share the reality about this morning drink we are so dependent on. It’s one of the few commodities that people are attached to and get emotional about,” she says. “The moment you bring some education and build a deeper emotional connection between the consumer and that farmer who spent years growing these beans, you can have a meaningful impact.”

This story is so inspiring. Palacio has given the coffee farmer growers the power to thrive and evolve into a successful sustainable future. Respectful of the environment, her native culture, spirit and knowledge of economics makes Palacio a dynamic entrepreneur.

In our community, coffee is an under estimated commodity and farmers are just left alone to struggle for themselves while starbucks clients line up to buy their coffee flavors at horrible price. Pity the farmers who produce them!