How a Hairstylist Blossomed Into a Budding Farmer - Modern Farmer
MTMF

How a Hairstylist Blossomed Into a Budding Farmer

In southern California, the Ecology Center is tending to a future generation of farmers through a paid apprenticeship program. 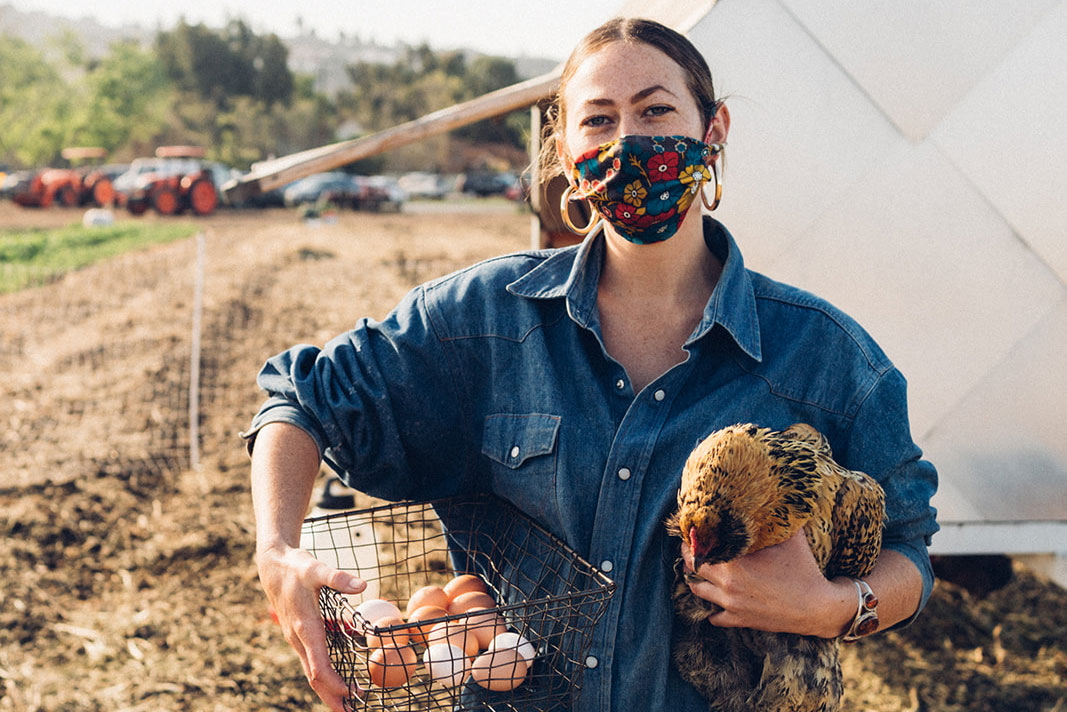 Rachel Duhame, a hairstylist in Los Angeles, had been cutting hair for eight years when she decided she needed a change. Despite her suburban upbringing, Duhame was always intrigued by farmers’ markets and the agriculture industry— even without a direct tie to it.

“It’s like that thread got pulled on and for many years, I would just read and watch documentaries, and continued to be interested and invested in [agriculture],” says Duhame, who didn’t have a model to follow. “There was a yearning to have more access, but that was just not really realistic. Like… who’s a farmer?”

Through the Ecology Center, a regenerative organic farm and nonprofit educational center in southern California, Duhame found her access point into the field. Last March, the center invited apprentices to spend six months learning about regenerative agriculture—and to get paid to do so. Duhame was one of eight apprentices the Center selected from a batch of 130 applicants.

Evan Marks, executive director of the Center, took part in farm apprenticeships himself during his journey into agriculture, and he believes they’re an important part of teaching the next generation of farmers. “Farm apprenticeships are happening all over the country and that’s great,” he says. “For our version, we took a lot of pieces from UC Santa Cruz’s [agroecology] program and adapted them to our own geography.”

In addition to teaching apprentices about crop rotation, cover cropping, composting, seed saving and cropplanning, the program aims to show apprentices how to cook the food grown on the farm through an on-site culinary team. There’s also an educational component that encourages apprentices to share what they’ve learned with other parts of the community, such as in an ecological book club or by hosting farming workshops for children.

“I love that about farming, that apprenticeship feels like the most authentic way to cut your teeth, to just get in and dig in,” says Marks, who founded the Ecology Center in 2008 after he made a similar jump into farming. A surfer who turned to agriculture as a way to make a difference in how the industry impacted the oceans, Marks fell in love with farming and got a degree in agroecology from UC Santa Cruz. 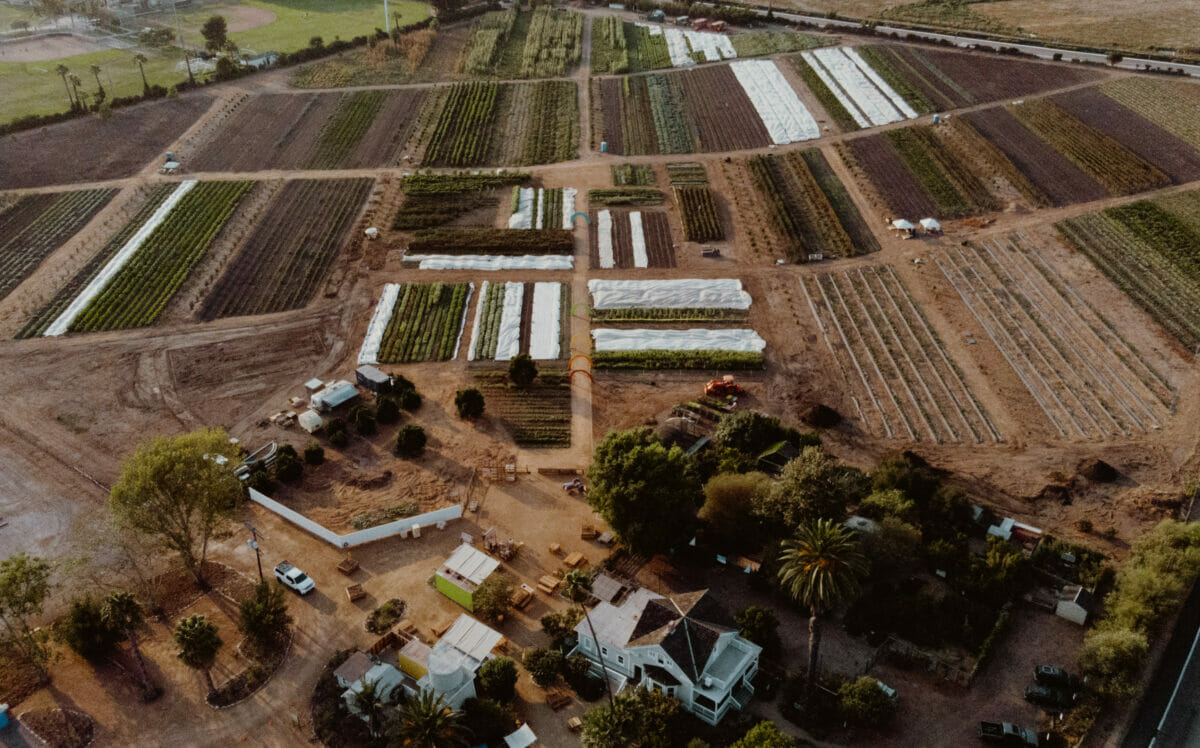 An aerial view of the Ecology Center. Photo by Kat Reynolds.

The Center operates a 28-acre farm in San Juan Capistrano as its main property, in addition to a small satellite farm in San Diego, where Duhame started volunteering the day she moved to the area. Even without prior farming experience—aside from a year of on-and-off volunteering at the farm—she was enthusiastic about expanding her agricultural knowledge, and she was excited to be chosen for the apprenticeship program. “It’s the funniest dichotomy,” she says. “I am still doing hair on the weekends in between working at the farm.”

The program, which ran from March through October, divided the apprentices into teams of two and rotated each group through two months in four different specialties—culinary, the field, market garden and propagation.

“The field is harvesting and cultivating. You harvest all day or you weed all day,” says Duhame. The market garden, she adds, is much more diverse. “It’s our small hand scale. It’s what you think when you picture small-scale farming: You do everything from bed prep, adding amendments to the soil, turning it over, shoveling and creating rows.”

For the culinary section, the work was seasonal and ranged from making strawberry jam for a local strawberry festival to assisting with and cooking for farm-to-table dinner events hosted by the Center. The propagation portion took place in the on-site greenhouse. “It’s a lot of the back end stuff like ordering seeds, crop planning and the front like organizational stuff,” says Duhame.

When Marks first launched the Ecology Center, the land was home to a 140-year-old empty farmhouse on a dirt lot owned by the city, only one acre of which was allotted to the Center as workable land. Now, with expanded acreage and community opportunities, Marks describes it as an “ecological oasis.” In addition to the apprenticeship program, the center offers a CSA with more than one 750 members, farm-to-table meal events and additional educational programs. “We are not just a resource for culture and community,” he says, “but we are deeply nourishing and healing the food system from the ground up.” 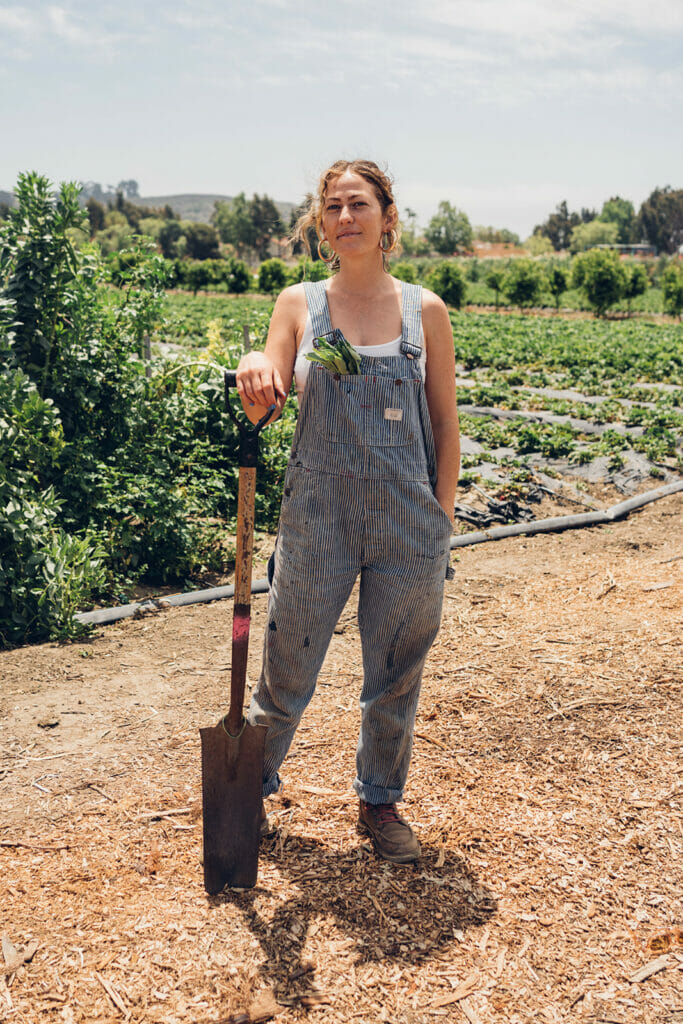 To both Marks and Duhame, the apprentice program—which is scheduled to run again in 2022—was a success. While she’s keeping her job as a hairstylist for now, the apprenticeship proved that having an on-farm job is a lifetime endeavor with which she’d like to keep up.

Reflecting on the experience, Duhame says she would push anyone with an interest in farming or agriculture to dive deeper into doing the physical work. “The intimidation factor can be very big with something as vast as farming or agriculture,” she says. “But even if it’s growing microgreens in your window or volunteering once a month on that little farm, I feel passionate about encouraging people to go for it.”