These farmers are growing peaches (if you know what I mean). 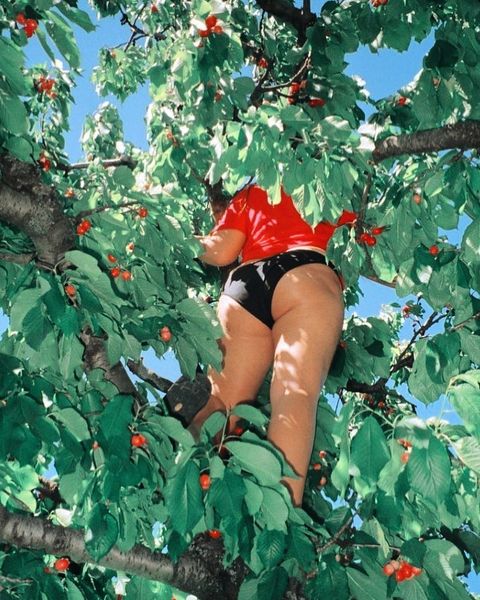 Here’s what I can tell you about the behind-the-scenes of the @farmbooty Instagram account: It’s two people, working collaboratively. One person collects the photos, the other comes up with the captions. One of those people spoke with Modern Farmer on the condition of anonymity, given that they work in the farming industry and didn’t feel they could reveal their identity. We’ll be calling them FB here.

Now here’s what I can tell you about the content of the @farmbooty Instagram account. It’s nothing but butts. Asses and bums, rumps and tushes. Sculpted through hours, years, of slinging hay and squatting to weed, these are the backsides of farmers across the globe. Some of the pictures are funny. Some are artful. Others are straight-up sexy. It’s a celebration, a glorious appreciation of the human behind.

The page started in February of this year, with the account following as many farm and garden accounts as it could find. The account quickly gained traction, with people submitting their own booty pictures to feature. It grew, more farmers and influencers found it, and more people submitted. It has a modest follower count—only about 1,500 people—but in a tight knit farming community, that’s pretty good. Now, there’s a constant stream of content flooding into the page, even creating a bit of a backlog. (It helps that World Naked Gardening Day was in May. There’s a lot of content to work through.) The account owner is, frankly, delighted by this turn of events. “I feel like I rigged my life to get booty pics,” they said. “It feels like such a luxury.”

Some people submit pictures because it’s fun. Jared, a herdsman in Colorado, saw the account after a friend shared it and loved it from the start. “I scrolled through the account and started cracking up, whether it was (a picture of) an actual human butt, an animal or that one of a squash,” he says. He had pictures from a small photo shoot that the staff on his farm did for a potential calendar. It was a natural fit and he sent them in. “I got a little teased by the farm crew for sending it and for how proud I was after it got posted. But that was totally worth it.”

In Israel, Jessica loved the page at first sight, calling it “genius.” She immediately wanted to submit a picture and found the perfect opportunity in her plant nursery. “I’ve been fond of posting booty content on my feed since my early 20s,” she says. “As I’ve gotten older I’ve stopped, so I eagerly welcomed this opportunity to express myself again. Also, I had huge leeks in the garden and I thought that a photo of my tush next to some big leeks would be fun to photograph.”

Some submit pictures to counter the old-fashioned or crude ways that farmers are sexualized in other media. Lowry, a rancher in North Carolina, had a photo on her Tinder profile that she says farmers always responded to. She thought it would be a perfect fit. “I think it’s kind of funny and liberating,” she says. “And agriculture is (either) not very sexualized or it is badly sexualized for the media. So this is kind of like taking back power and showing a little bit more glamour to hard manual labor.”

Some people submit their pictures to showcase a diversity in farming bodies. “It feels good to share or represent my queer brown body in a farming world of often white heteronormativity,” says Shayne, a cannabis farmer in California. “Honestly, the photo I submitted might be the best photo I’ll ever have of my backside, so I wanted to share it with the world.”

While every submitter Modern Farmer spoke with found the account fun and funny, there have been comments about the kind of buns that most often get featured on the page. It’s mostly slim, white bodies filling the Instagram grid. It’s something that FB has thought about and addresses in a Highlights tab on their page. “I can’t force people of color to submit to me and I don’t want to tokenize them,” they say. At the same time, they say they do hope more people from marginalized communities with a range of diverse bodies feel comfortable submitting to the page. Where one booty goes, others often follow, creating an avalanche effect. “This is a celebration of the human form in all its forms and all of the hard work that it’s capable of,” FB says.

FB also says they mostly don’t pick and choose which buns to feature. Unless the picture is of poor quality or explicitly graphic, they post most of what is submitted, in roughly the order it comes in. That’s why there’s an overflow of slightly sexier, more naked submissions right now. “Once we start posting more naked pictures, people get really excited and emboldened and they’re like, ‘Oh, I could do that,’” FB says.

Ultimately, FB says the account is a celebration. For many farmers, these pictures are an appreciation of grueling physical labor. For others, it’s the idea that even mucking about in the dirt can be sexy and playful. For the most part, followers are unfailingly positive and encouraging. Fire and peach emojis abound in the comment section, with a few ‘omg’ and ‘this is amazing’ notes thrown in. Some submitters are even attracting attention off the app. “Yesterday I got a message asking if I could sign a copy of my picture,” Ariel says. “He said ‘you have the nicest butt I’ve seen. I would really love a signed copy of your photo.’ And I actually sent it to him because he was genuine. I was like, ‘Okay, please don’t sell this!’”

Autographs aside, Ariel, a honey farmer in Vermont, has found the whole process to be an overwhelmingly positive experience. She’s submitted two photos to the page and through them has connected with other farmers and people in the business. “It was mind-blowing how many people had positive things to say about (the pictures),” she says. “I guess you never know until you put yourself out there a little bit in a fun way.”

How far can a niche Instagram account go? The sky’s the limit, but FB says they are taking it slowly. They have plans for the future, starting with a @farmbooty playlist. “It could be collaborative, like a booty-bouncing-on-the-farm playlist. And I’m going to crowdsource that from our followers,” they say. “I would love to do the Golden Peach award and to have people vote for their favorite booties on the page.”

From there, perhaps a dip into some booty swag. FB says they would love to make a logo for future merch. What about FarmBooty underwear, this reporter asks. It feels like a natural extension of the page. “I personally don’t like underwear that’s branded, but I know that I’m not everyone,” FB says.

That’s fine. Whatever they decide to do with their growing popularity, they clearly know booties best.