A new bill, signed last week, is the next hurdle for a pending lawsuit against Florida sugar growers and their use of sugarcane burning. 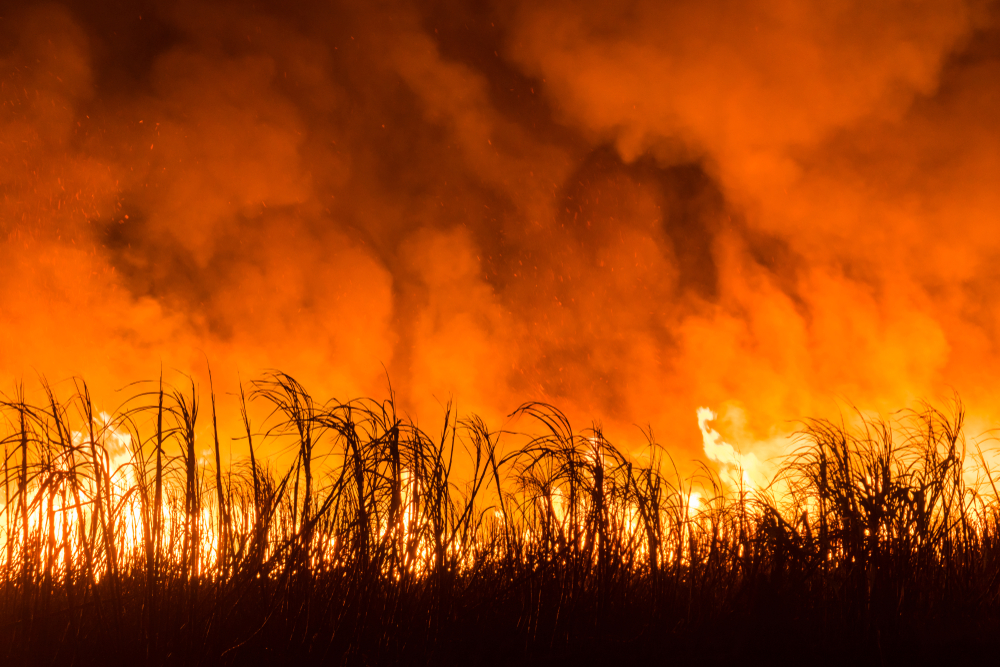 Southern Florida is home to the largest concentration of sugarcane plantations in the US. The area is home to one-quarter of the country’s sugar production, and for half of the year, farmers there routinely set their crops on fire.

Using a controlled method of sugarcane burning, Florida growers set the fires in contained, small areas, igniting the leaves around the cane, which burn off like newspaper and reveal the sugar-rich stalks beneath. The practice fills the air with smoke, soot and ash into mostly Black and Hispanic neighborhoods on the northern edge of the Everglades. The smoke plumes are so thick that, starting in October and lasting until April, NASA satellites often observe them from space.

Florida’s practice of sugarcane burning is at the heart of a class action lawsuit filed in 2019 against nearly a dozen growers, in addition to the Sugar Cane Growers Cooperative of Florida. The lawsuit alleges that 10 residents of the Glades were injured due to particulates in the air from sugarcane burning. They claim the smoke causes asthma, difficulty breathing and other illnesses. “Neither we nor our clients are anti-farming,” says Matthew Moore, the lawsuit’s chief lawyer. “The purpose of the lawsuit is to get the industry to switch from unnecessary burning that is making people sick and damaging property to mechanical harvesting.”

The potential outcome of the case just got a bit more complicated. Last Thursday, Governor Ron DeSantis, a Republican, signed into law Senate Bill 88, which modifies Florida’s Right to Farm Act to broadly protect farmers from lawsuits if they’ve followed regulatory requirements. Touted as a bill intended to protect farm operations for agritourism activities such as hayrides, corn mazes and winery tours, it limits the dollar amount plaintiffs can collect in lawsuits against farms. It goes into effect on July 1.

“In effect, a property owner has to show that their property lost value due to the harm. That is hard to prove even in a wealthy community, but in an area such as the Glades, which already suffers from depressed property values, it means that those harmed will have a nearly impossible task proving damages,” says Moore.

Proponents of sugarcane burning say the controlled pre-harvest burns are necessary because they promote healthy plant regrowth and improve the efficiency of the harvest. According to US Sugar, one of the nation’s top sugar growers, sugarcane burning “improves soil conditions while reducing the occurrence of wildfires and decreasing the presence of rodents, insects, and other pests.”

But opponents want Florida sugarcane producers to switch to green harvesting, a practice that uses machinery to separate the sugarcane leaves and tops from the stalks. Other sugar-producing countries, such as Brazil and Thailand, have already moved to phase out or ban sugarcane burning entirely. That’s because the fires release various gases and particles, some of which are believed to be carcinogenic.

In one study, researchers at Florida International University found that particulate matter—a hazardous mixture that is most harmful to a person’s lungs—in Belle Glade, a small town at the center of the sugarcane growing area in Palm Beach County, is 15 times higher during harvest season than it is at other times of the year.

The bill DeSantis signed included particulate matter in the list of excepted harms, limiting those who could make claims to within a half mile of the farm. “Consider this: A person living next to a farm contracts lung cancer because the farmer does something illegal. The only compensation the victim would have is based on property value? That is absurd,” says Moore, “but that is what this law will do.”

Moore isn’t giving up on the lawsuit, which is currently awaiting a judge’s decision on the defendants’ motions to dismiss the complaint. Because the new SB 88 bill is not retroactive, he intends to fight for justice for the more than 30,000 Glades residents who live among South Florida’s sugarcane fields. “To say that SB 88 has anything to do with agritourism is patently false on its face,” says Moore. “It is another example of Big Sugar’s influence over Florida politics at the expense of poorer people who live within the 675-square-mile hazard area that burns six to seven months out of the year.”

“Consider this: A person living next to a farm contracts lung cancer because the farmer does something illegal. The only compensation the victim would have is based on property value? That is absurd,” says Moore, “but that is what this law will do.”

THIS IS PATENTLY FALSE. THE BILL ONLY PROTECTS FARMERS WHO ABIDE BY ALL APPLICABLE REGULATIONS. IF THEY DO SOMETHING ILLEGAL, ANYONE CAN BRING SUIT.