How to Take Care of Your Air Plants 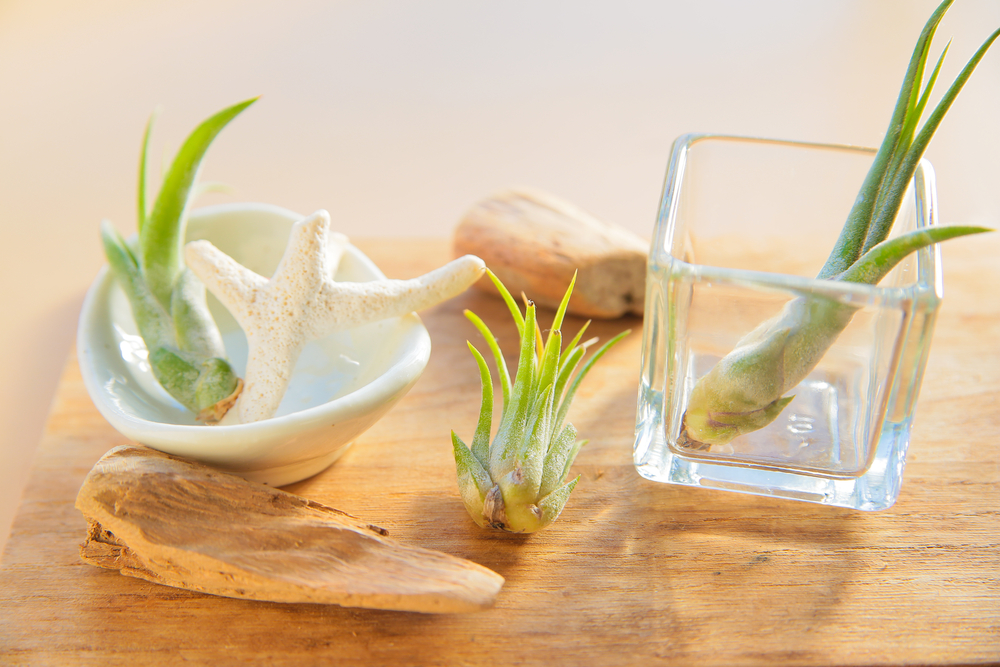 The pandemic helped many of us discover that tending to a small cohort of houseplants is an ideal activity to ease the burden of isolation. If you weren’t a proud plant parent before 2020, chances are that being confined to your home inspired you to become one.

If you’ve decided you’re in plant parenthood for the long haul, and you want to try taking care of something a bit different, you might want to consider air plants.

These plants, otherwise known as Tillandsia, don’t need soil to grow. Instead of using a traditional root system to absorb nutrients, they have little appendages on their leaves called trichomes. Trichomes absorb water, sun and air nutrients, but they also have the ability to reflect sunlight to protect water within their bodies.

For many eager air plant owners, there’s a common misconception that, because they don’t need soil, these plants can survive on air alone. This is not true. Leaving your air plants alone in a terrarium to fend for themselves will result in a short-lived life.

So what’s key to ensuring your air plants thrive? Here’s our comprehensive guide of tips and tricks that will make it less likely you’ll kill off your air plants.

Choosing an air plant can be an overwhelming task. There are more than 600 different types of plants that belong to the Tillandsia genus. To narrow down your search, here are some commonly chosen varieties. 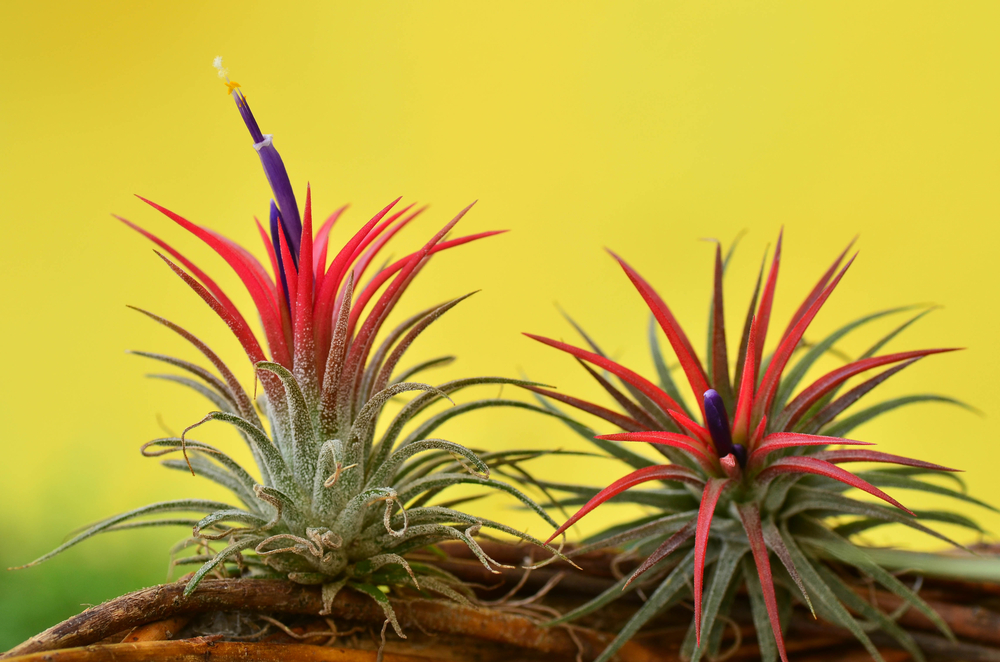 This spunky little variety, native to Central America and Mexico, changes color throughout its lifespan. Starting out with green and silvery leaves in early days, this plant turns a deeper green as it matures and its leaves flare out. In its bloom cycle, that shade of deep green is transformed into vibrant shades of red and pink. They typically range from two to six inches in height. 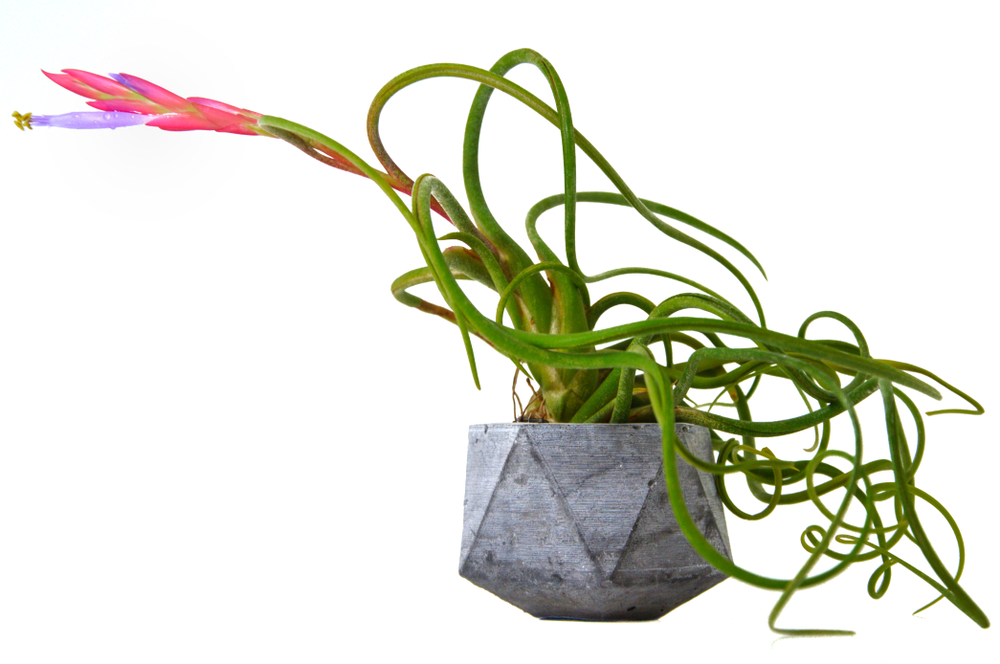 It’s not hard to see why the colloquial name for this plant is associated with the slithery tresses of medusa. This plant, also native to Central America and Mexico, has twisting leaves that can reach up to 10 inches in length. It typically blooms flowers in bright violet. 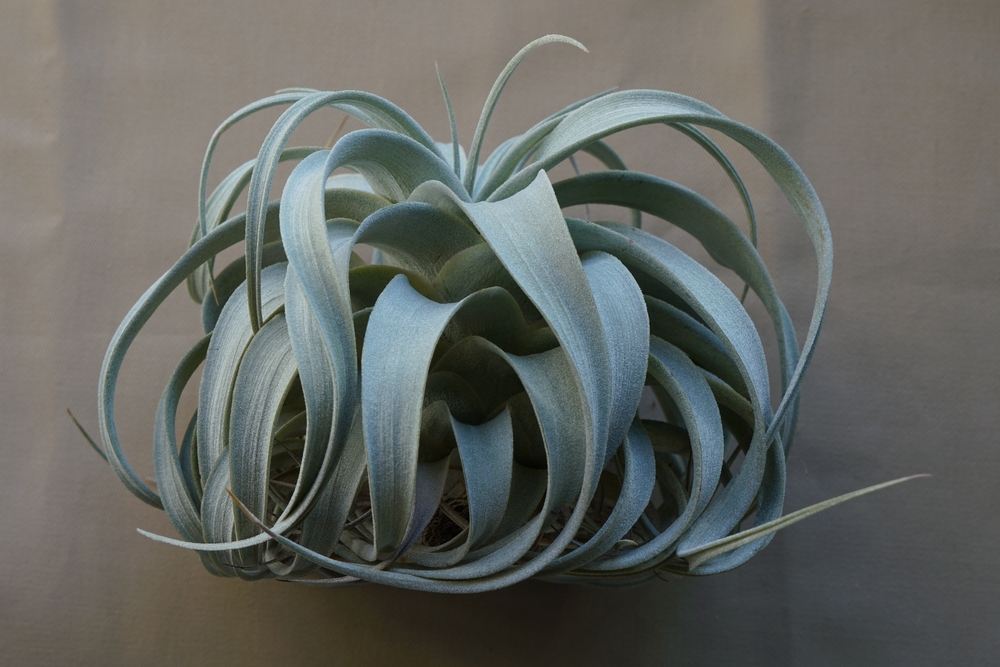 The xerographica is a silvery plant with thick, wide leaves that taper and curve at its end. These plants can grow more than three feet in size. Once it begins to bloom, the plant will produce a spike in its center. This will later develop into a red, purple or yellow flower. This prickly plant is native to southern Mexico, El Salvador, Guatemala and Honduras. 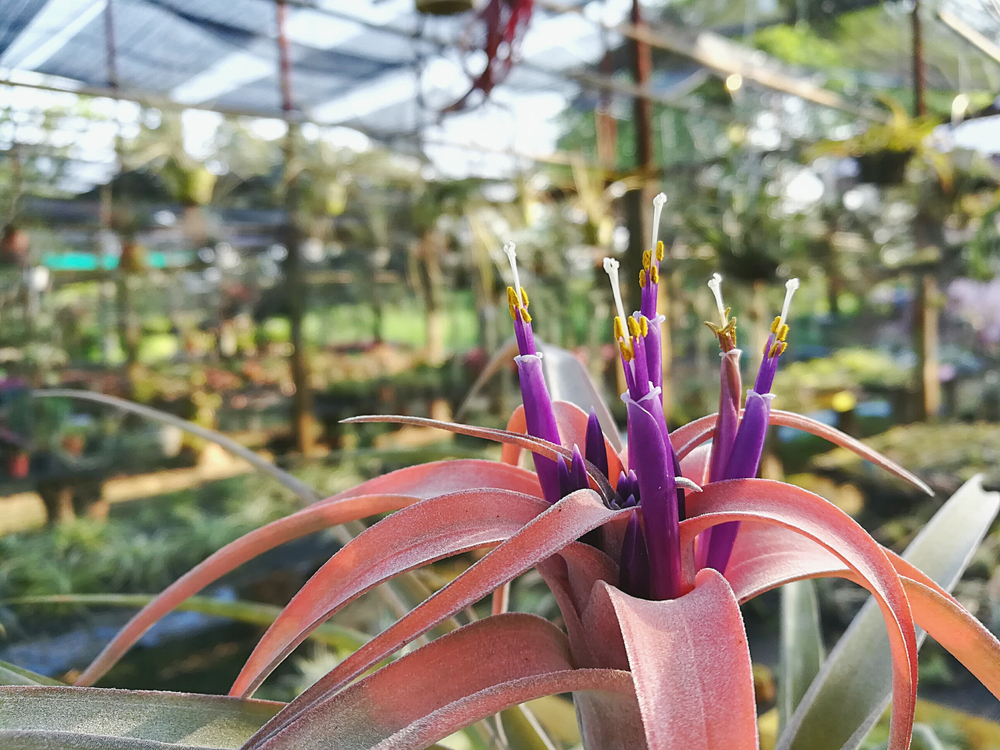 The capitata peach begins its life cycle with silvery green leaves, which later turn a peachy shade of pink, as seen above. You’ll also notice that, as it grows, its leaves unfold from its center and create a fountain-like shape. These plants, which sprout a purple flower in their bloom cycle, are native to Mexico, Honduras, Cuba and the Dominican Republic. 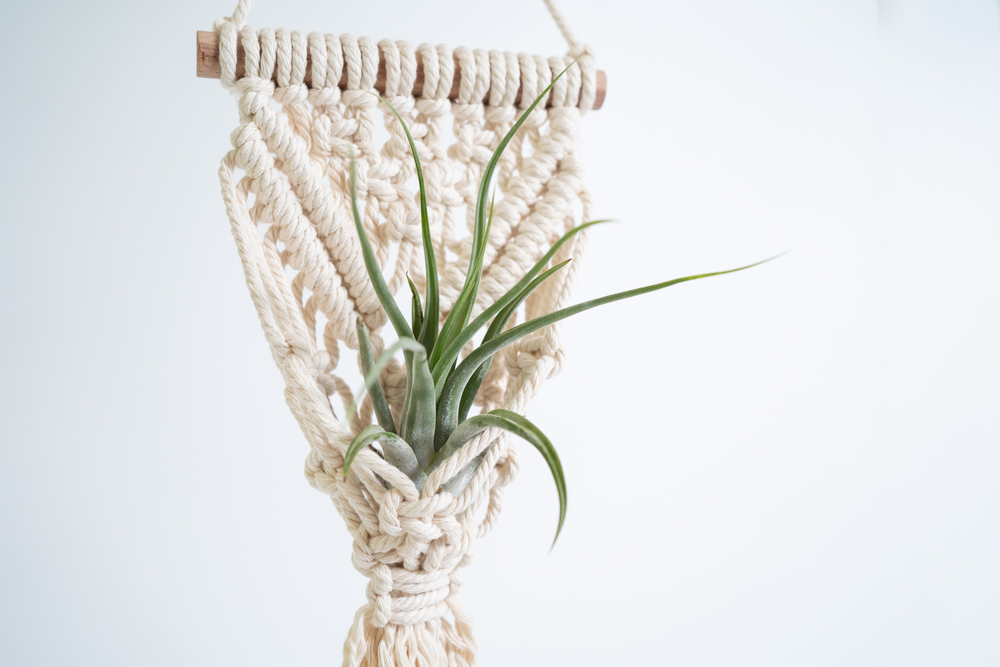 The potbelly air plant is native to Central America, Mexico, Venezuela, Colombia, the West Indies and Florida. It typically sprouts around five to ten silvery leaves on each plant and blooms flowers that range in pale pinks and purples. They grow to be around four inches wide and six inches tall. 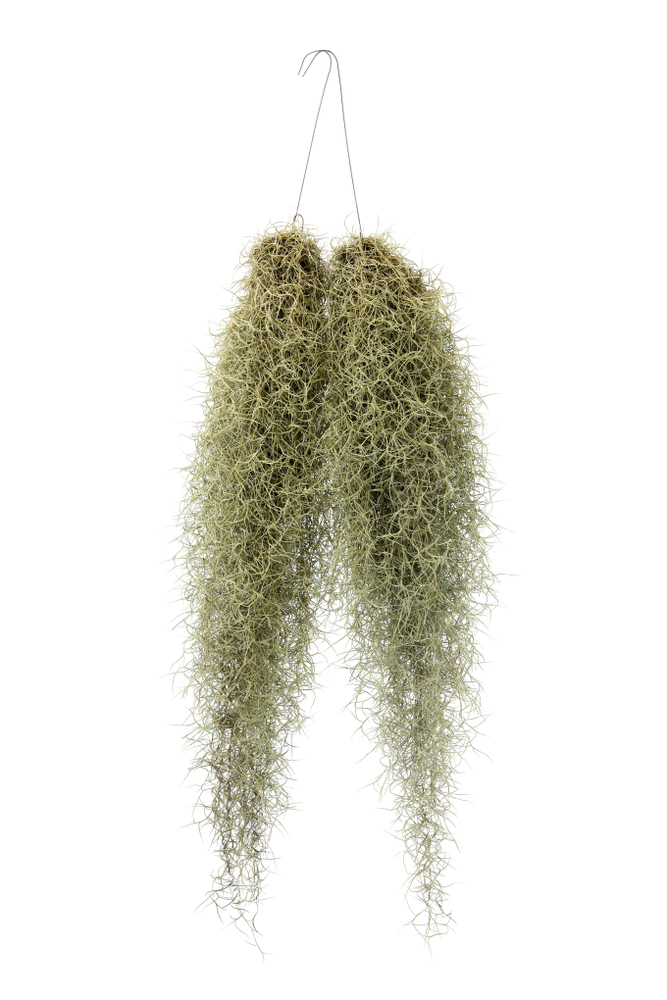 This plant’s wiry, long leaves can reach lengths of 20 feet, and the addition of this variety will no doubt make your home feel like a bit of a jungle (or a park in Savannah, Georgia). Spanish moss is native to most of Mexico, Bermuda, the Bahamas, Central America, South America, the southern US and the West Indies. It sprouts yellow flowers.

Just like picking an air plant variety, there are many ways to put your new plant baby on display. From macramé and baskets to glass terrariums or wooden bowls, you’ll no doubt find something that reflects your own personal style.

If you do decide to go the route of displaying your plant in a terrarium, look for one that is not fully enclosed, as your plant needs exposure to air movement and nutrients.

It’s important to avoid any containers made of copper, as the mineral is toxic to air plants. Pressure-treated lumber also contains chemicals that are made of copper, so if you’re putting your plants inside any wood container, be mindful of this as well.

Lastly, do not place your air plant in soil with non-air plants. You might think that it won’t have an impact since these little critters feed off air, water and sunlight, but throwing them in some soil can cause their roots to rot.

Although there are many different types of air plants, they generally prefer the same conditions.

Bright, indirect sunlight, about three to five feet away from a window, is best. They will thrive in temperatures anywhere from 50°F-90°F.

Avoid direct sunlight, as it can cause your plants to burn and lose moisture. As air plants are plants native to humid, tropical regions, retaining moisture is key to their survival.

Also steer clear of heaters or air conditioners. Not only are air plants sensitive to the cold air, but being placed near a heater can cause them to dry out.

Proper watering will ensure your air plant retains the nutrients and the moisture it needs to survive.

To do this, you’re going to want to fully submerge your plant in a bowl or a sink full of water for 20-30 minutes one to two times a week. When you take it out of the water, place your plant on a towel and flip it upside down so its base is upright. Because the plant absorbs its nutrients using the appendages on its leaves, this allows as much water to get to the leaves while also ensuring excess water drains out of the plant. It also prevents water buildup at the base, which can cause your plant to rot.

We recommend that you fertilize these plants once a month. You can do so by adding a bromeliad fertilizer mix to your water.

There are a few common air plants that we didn’t include in our list above that need to be misted every few days instead of soaked. They are: Tillandsia tectorum, Tillandsia bulbosa, Tillandsia butzii, Tillandsia seleriana and Tillandsia pruinosa.

In general, it’s best to refrain from using distilled water for your air plant unless you plan on adding fertilizer each time. This is because the water is too pure and lacks the nutrients your plant needs. Softened water is another no-no because its salt content is too high for air plants.

You will know if your plant is thirsty if its leaves start to buckle and turn inwards. They might also start to dry out and turn brown at the tips.

You will know if you’ve overwatered it if the base starts to darken or get mushy and its middle leaves fall out or turn yellow.

In both cases, remove the damaged area with grooming shears or scissors. If your plant is dry, give it a soak. If it’s been overwatered, place it upside down in a dry, well-ventilated area after removing the damaged pieces.

Eventually, your air plants will move into their blooming cycle. Flowers can last from several days to many months, depending on the type of air plant you have, but most plants only bloom once.

After your plant starts to sprout flowers, it will produce offspring, otherwise known as pups.

You can remove these pups when they’ve reached at least one third of the size of the mother plant. To do so, get a good grip on the pup’s base and gently twist it. These pups will eventually produce their own pups. Treat these babies just as you did its mother.

I can’t keep air plants alive. I have a green thumb on other plants.

I mist mine, inside and out, and they do quite well, growing unbelievably. I live in Florida where it is warm and great for these air plants.

My cats insisted on eating and playing with them…heavy sigh

‘This is great information, I have one plant that always feels dry,I soak it once a week and mist 2 times.I hope hanging~ upside down will help.

So, this is how air plant survive in nature.