How Goat Poop Illuminates the Future of Biotechnology

The plant nibblers can teach us a thing or two about bioprocessing. 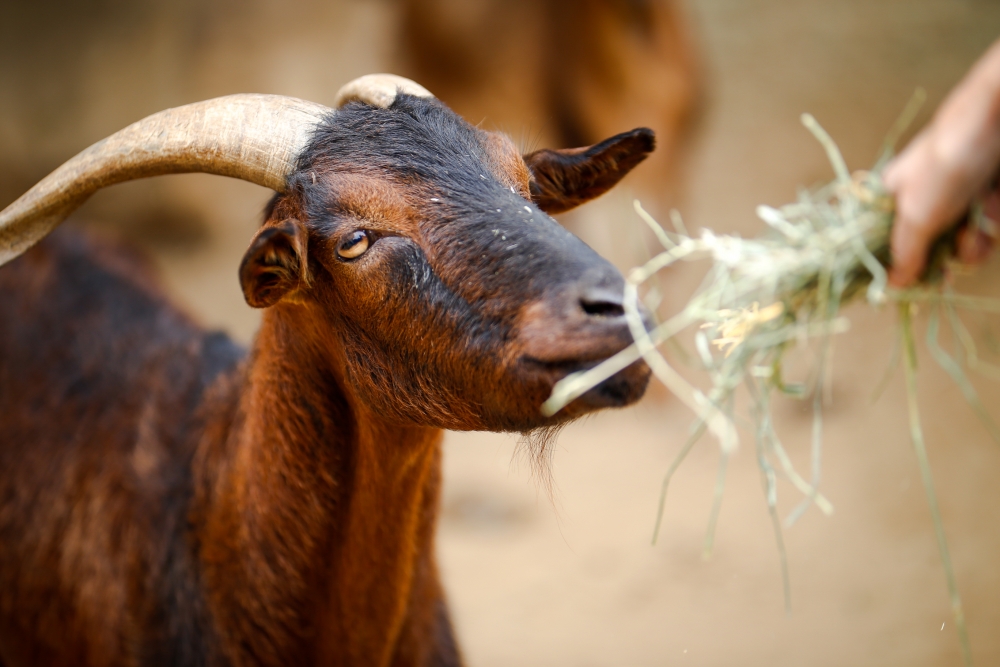 Like other herbivores, Elway, a San Clemente Island goat at the Santa Barbara Zoo, can extract energy-rich molecules from cellulose to fuel its activities. And he’s particularly good at it.

Goats have microbes that can effectively digest the woody, fibrous and inedible bits of plants and turn them into energy. Scientists have been hoping to learn how these barnyard animals are so effective at doing this in the hope that it can be used to transform plant wastes into energy.

It turns out that Elway’s poop holds some clues. By studying his feces, a group of researchers garnered insights into what microbes are in Elway’s gut and how they work to break down plants. The findings, published earlier this month in Nature Microbiology, may offer a roadmap for future engineers to design a system that can turn plant waste into energy or other valuable products. The study could also help scientists develop a way to lessen the methane emissions from livestock.

“As an engineer, I have always been really interested in weird places that do cool chemistry,” says Michelle O’Malley, a bioengineer at the University of California, Santa Barbara and the senior author of the study. One of these places, O’Malley says, is the herbivore’s gut, where a kaleidoscope of microbes executes elaborate biochemical reactions for digestion. The end product—poop—can reveal the amazing actions inside.

Over the past five years, O’Malley’s team carried out more than 400 “enrichment experiments,” where they fed Elway’s fecal microbes four types of fibers (alfalfa, bagasse, reed canary grass and xylan) and two kinds of antibiotics. By mixing and matching the fibers and antibiotics used, the researchers were able to encourage or suppress certain microbial communities—archaea, bacteria or fungi—and, in the process, parse the biological functions of each group in a goat’s gut. Along the way, the team also kept track of the microbes and metabolic products present in these cultures.

In the end, O’Malley and her colleagues were able to identify about 700 new microbial species in the goat gut along with thousands of enzymes. They also described the functions of different microbes in breaking down tough plant fibers. These findings paved the path for future scientists to improve and advance the plant-processing biotechnologies using microbes.

Notably, they found that anaerobic fungi plays a major role in generating methane in partnership with methanogens—methane-producing microorganisms.

“What [the researchers] have found is really amazing, in terms of how diverse these microbes are in the goat gut microbiome,” says Xiaoxia Lin, a biochemical engineer at the University of Michigan, who was not involved in this study. Lin has also been trying to tap into cellulose digestion in her laboratory. This study, she says, can offer “a new toolbox” for future endeavors.

Take methane production in herbivores. Empowered by this new data, scientists may find ways to tone down the fungal metabolism involved in producing methane to reduce livestock’s methane emissions, which contribute 44 percent of methane generated from all human activities annually, according to the Food and Agriculture Organization of the United Nations.

On the flip side, engineers could use the enzymes from the anaerobic fungi to help produce methane—the primary component in natural gas—by upcycling plant wastes on a large scale. It has been reported that, every year, roughly 40-plus million tons of plant residues from agriculture and forestry are trashed despite their bioprocessing potentials. Methane produced by microbes can be harnessed into the natural gas pipeline to generate electricity, make fertilizer, cook food, heat buildings and water and power cars.

There are obstacles ahead—not all of them easily digestible. Working with enzymes can be expensive, says Laura Jarboe, a bioengineer from Iowa State University not involved in the study. Additionally, enzymes are typically temperature-sensitive, she says, making them tricky to work with. But Jarboe thinks this study’s finding of previously unknown microbes and their roles in the herbivore’s gut is “substantial.”

O’Malley’s group will next use Elway’s poop to achieve their long-term ambition: learning how to assemble an artificial microbial team where these tiny organisms can work in concert to unleash the beneficial chemicals from cellulose—one of the most plentiful organic molecules on Earth— just like they do in Elway’s gut.

“We don’t have to reinvent the wheel,” says O’Malley. “Nature has a lot of different rules that we can follow to take waste and convert it into something valuable.”