Alfred Melbourne wants to give young people the opportunities he didn’t have. 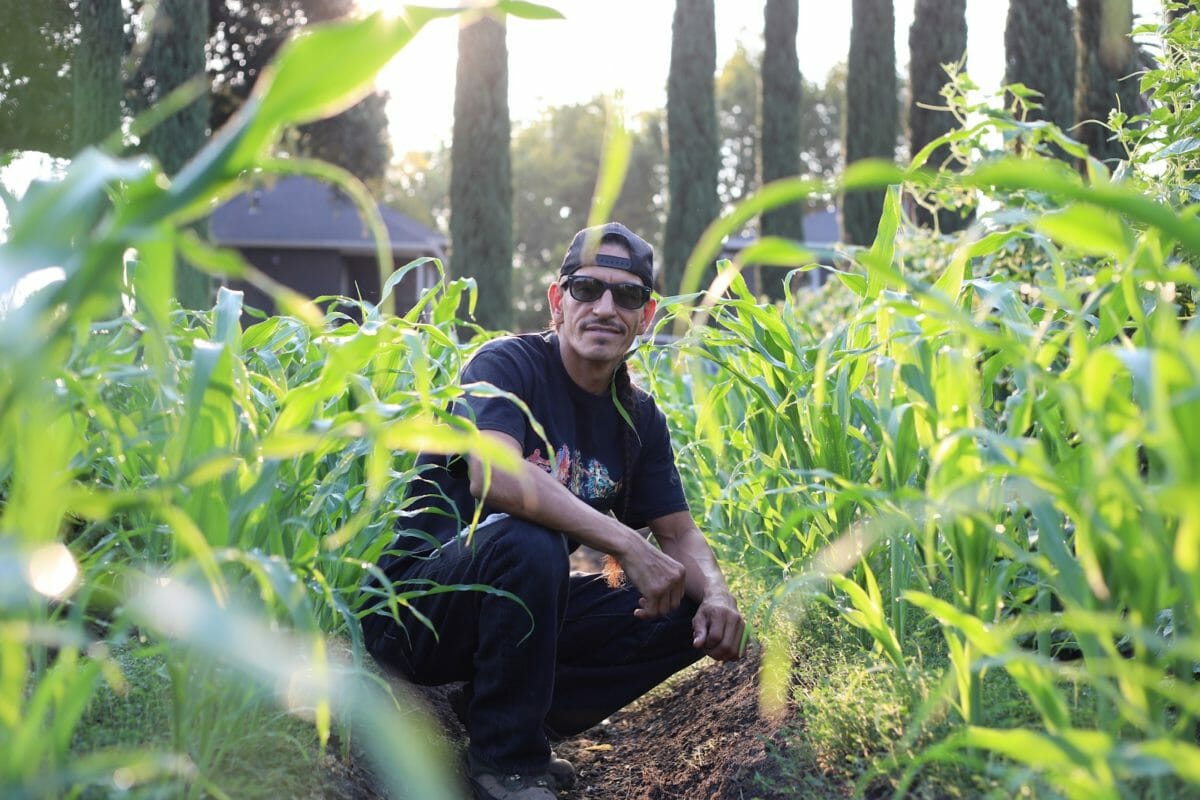 Alfred Melbourne found a fresh start on an eighth of an acre of land.

When the California resident was released from prison in 2016, he worked for a tech company installing phones and also operated a forklift. He found that he felt generally unfilled during that time.

Melbourne, who served 18 years for gun and assault charges, says this changed when he came across an overgrown and abandoned piece of land in Broderick, California. A friend and local activist, Francisco Gonzales, showed him the land in 2018 and told him a community garden used to occupy the space.

Melbourne thought he might tackle reviving the land into a garden as a side project. Over the course of three months, he removed 30 bags of garbage, installed water lines, tilled the soil, and planted seeds. When it was done, he knew the garden was something he wanted to take care of in the long run.

“It was my therapy. It allowed me to really work through some things, really get my hands dirty, connect with the land and wear myself out, knowing that I was building something positive,” he says. “Seeing what I could transform on the outside, it made me transform my way of thinking on the inside. It allowed me to see that change is possible this way in myself.”

That same year, Melbourne founded an urban farm and nonprofit called Three Sisters Gardens. Since then, he’s transformed three other spaces in West Sacramento into thriving organic vegetable gardens. But it’s been more than a food source. Melbourne has hired at-risk youth to work the gardens, hoping that he can play a role in deterring them from the criminal justice system.

Currently, Melbourne employs 10 youth between the ages of 15 and 24 along with one crew leader who was formerly incarcerated. Drawing on his Hunkpapa Lakota heritage, Melbourne integrates traditional Indigenous farming knowledge into his model such as “three sisters” companion planting and cover cropping. He does not use any pesticides or chemicals.

Melbourne and his workers have daily talking circles and occasional victory songs accompanied by a drum. He frequently brings up a Lakota philosophy of interconnectedness that he lives by: Mitakuye Oyasin, translating to “we are all related.” Though 60 percent of the youth on the farm are Indigenous, Melbourne says that this simple message of respecting every living thing is valuable for anyone to be exposed to, regardless of their background.

Miguel Lopez says the experience has had an impact on him. The 17-year-old has been part of the Three Sisters Gardens team since 2018. Raised by a single mom who would often be away from home working 12-hour shifts, Lopez says he had a lot of time alone. He says he would often find himself on the streets, getting into trouble instead of focusing on school. When he met Melbourne through a mutual friend, he says he started to change his attitude. Lopez believes that if he didn’t have Melbourne or Three Sisters Gardens in his life, he might be in prison or worse, dead.

When times have been tough, Lopez adds that Melbourne has helped keep him focused on school. He’s provided Lopez with rides, helped him financially when he has been short on cash and has allowed him and the others to regularly take home fresh vegetables to their families.

Three Sisters Gardens sells its vegetables to restaurants, through CSA boxes and at a farmers stand. The group also donates a large portion of its yields. Around 40-60 percent of a harvest goes to vulnerable members of the community, including what his farm team takes home. Right now, Melbourne donates produce to a food bank, but he’s also working to set up a distribution system with two Indigenous health centers so that he can get food specifically to Indigenous people in need.

The urban farm has captured the attention of local politicians and those who work in the criminal justice system. Dean Johansson is one of them. Johansson, who is a board member for the nonprofit, has spent more than 20 years working as a prosecutor and a defense lawyer. He says the support and community presence that Melbourne offers to the young people, is something that’s been missing for decades.

“These kids grow up to assume they’re going to end up in the same prison pipeline that their parents have been in and that their neighbors have, but what Alfred represents is transformative justice at a root level,” Johansson says. “He works day after day for these kids, just to keep them busy, mentoring them, ensuring they have lifelong lessons and that they stay out of the cycle he found himself in. He’s reminding a community of what it can be capable of. “

Melbourne says all the positive attention his work has received has let him to speak on a variety of panels about issues in the criminal justice system. He believes he’s just scratched the surface of what he wants to accomplish with Three Sisters Gardens, but says he knows he must be doing something right, as the youth keep coming back. He hopes in the future that he will be able to expand his team and the number of land plots he’s growing. One day, he hopes to give his current employees their own gardens to run.

Where do I begin , my name is Steven Gomez , I am of the Diné nation located out of Window Rock Arizona. When I first met Alfred Melbourne it was in 2003 where we both resided in CDCR we connected and became not friends but more like family not to mention we both are out of the same neighborhood. Little did we know I’ve known his family for almost my whole life. From my view Alfred has always been a well rounded very educated individual and his determination is something I’ve always admired about him , but until now… Read more »

What wonderful work this man is doing !

What a heartwarming generous way to enrich the lives of many….. Thank you for all you are doing to better this world <3

Alfred is a blessing who uses his skills and life experiences to bless others! May God preserve this man for many more years for many more blessings.

Im a horticulturist from the Philippines and i admire your work and passion..keep up the good work and keep safe.

If MORE people around the world would do what this man, Alfred Melbourne is doing the world would be a much happier place…like giving all of the people with less more to do…!!!…

Popular
7 Smokable Plants You Can Grow That Aren’t MarijuanaBrian Barth
The Fertilizer Shortage Will Persist in 2023Shea Swenson
Agricultural Runoff Pollutes Well Water, a ‘Public Health Crisis In the Making’Madison McVan, Investigate Midwest
Move Over, Mezcal. A Sustainable Tequila Alternative Is Taking Over.Hollie Stephens
Why Don’t We Eat Turkey Eggs?Dan Nosowitz
Explore Modern Farmer
Related
Features, Food Security, Labor
The Rise of Virtual Farmers MarketsLeah Borts-Kuperman
Environment, Labor, Water
California Farms and Farmworkers Attempt to Recover From Record FloodsNaoki Nitta
MTMF, Plants
This Modern Farmer Wants You to Grow a New Potato StrainBevin Cohen
Food Security, Labor, news
A New Egg Co-operative Has Hatched in the Western U.S.Lindsay Campbell
wpDiscuz
We use cookies on our website to give you the most relevant experience by remembering your preferences and repeat visits. By clicking “Accept”, you consent to the use of ALL the cookies.
Cookie settings ACCEPT
Privacy & Cookies Policy