Leandra King believes Detroit Farm and Cider will be a vehicle for positive change. 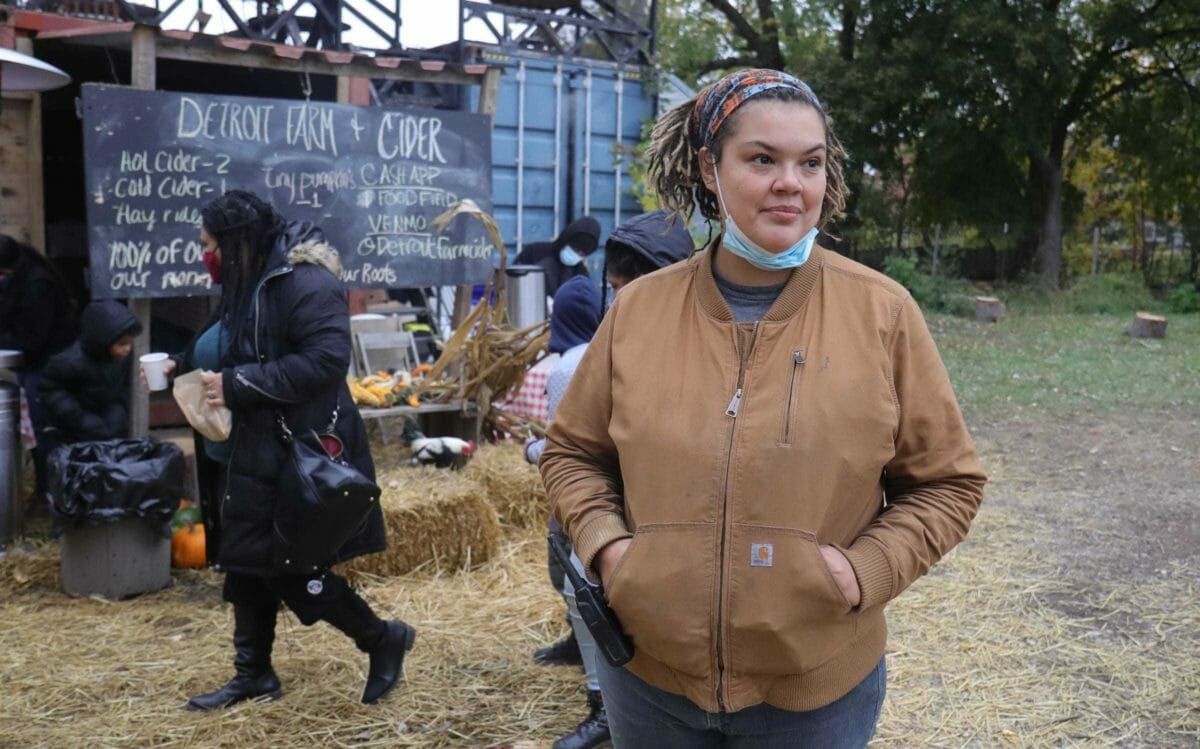 As a child growing up in a turbulent home with a mother who abused drugs, Leandra King constantly faced a paralyzing anxiety that would completely consume her.

To calm down, she would find a quiet place outdoors and pile mud and dirt on her body.  At the time, King didn’t really know why she did it or understand why it helped. The outdoors was simply a positive space where she could go to escape that anxiety. But the Detroit resident later learned that immersion in nature can have a restorative effect for those dealing with mental health problems. King recently opened Detroit’s first cider mill, a venture she hopes will share that same kind of positive space with her community.

“Whatever you’re experiencing in your life, being connected with the Earth will help [you] heal and there’s a lot of healing that’s needed in our city,” she says.

About 18 months ago, King bought a four-acre plot of land that was an abandoned school in the Dexter-Linwood neighborhood. There, she opened Detroit Farm and Cider: what she says is the first Black-owned cider mill in the country.

On what she describes as a slice of rural paradise in the midst of the city, King has an orchard consisting of 139 different fruit trees ranging from apple, peach, cherry and pear. She has goats and chickens for a petting zoo, horses, hayrides, zip lining for kids, live music, as well as 10 garden plots and three greenhouses where she grows everything from squash and brassicas to strawberries and pawpaw patches. “People get to come and experience a farm-like environment. It’s something that’s not typical of Detroit,” King says.

Of course, King has cider too, but she didn’t produce the apples for what she is currently selling. She ran into an unexpected spring frost that delayed her own cider production until next year. To ensure she still has a supply, she sources cider and donuts from another cider mill in Northville, Michigan.

Admission to the space is free, and her farm’s produce is sold at an affordable price. King also accepts food stamps under the Supplemental Nutrition Assistance Program. She says it’s important to her to have a space that is accessible to everyone, and that she’s especially focused on bringing the Black community together.

“There’s a spiritual and an emotional disconnect when it comes to unity within the community and family…. For some reason, we’re not able to live together in harmony,” she says. “The cider mill, it’s here because we didn’t have one, but it will be an outlet or platform to address some more deeper issues.”

Eventually, she says she’d like to provide space for a handful of Black vendors and more farmers to sell their products on the property and she’d also like to provide housing for them. King hopes she’ll eventually be able to offer programs on the farm to help young people struggling with mental health issues. For the time being, she’s focused on ensuring she’ll be able to offer Detroit-made cider by next fall. She says watching her visitors enjoy the natural surroundings of her cider mill has kept her motivated.

This is so wonderful and desperately needed in our city. Detroit has so many cultural creatives doing brilliant work and so few of them get the recognition and support they need. The issues surrounding land use as it regards climate–and culture–change are immense and everyone can be involved. Learning the skills of sustainable and regenerative agriculture on a mass scale requires everyone to learn and implement the knowledge and skills at the micro level–in our own yards, gardens and communities. As a writer, this is my primary area of interest currently and I’m hoping I’ll be able to interview Ms.… Read more »

Leandra, that is awesome. Bringing the growing of food back to urban areas is so important. Thank you for all you do.

GREAT MINDS THINK ALIKE!!! I am so happy for you. I instantly followed you on Instagram my name is Cornelius Simmons aka: CROPPER CORN. Please let me know what other platforms you are on so I can follow you. I pray one day we get a chance to meet and do business. I pray that God grants you wisdom and continual growth for generations to come.

Bravo on this wonderful project of love.

Leandra I so applaud you🙌🏿🙌🏿🙌🏿🙌🏿🙌🏿🙌🏿 For being the visionary to bring a Black Cider Mill to Detroit!! Can’t wait to taste that nectar next year 😋