A zinnia isn’t just a zinnia at Chicago Eco House. 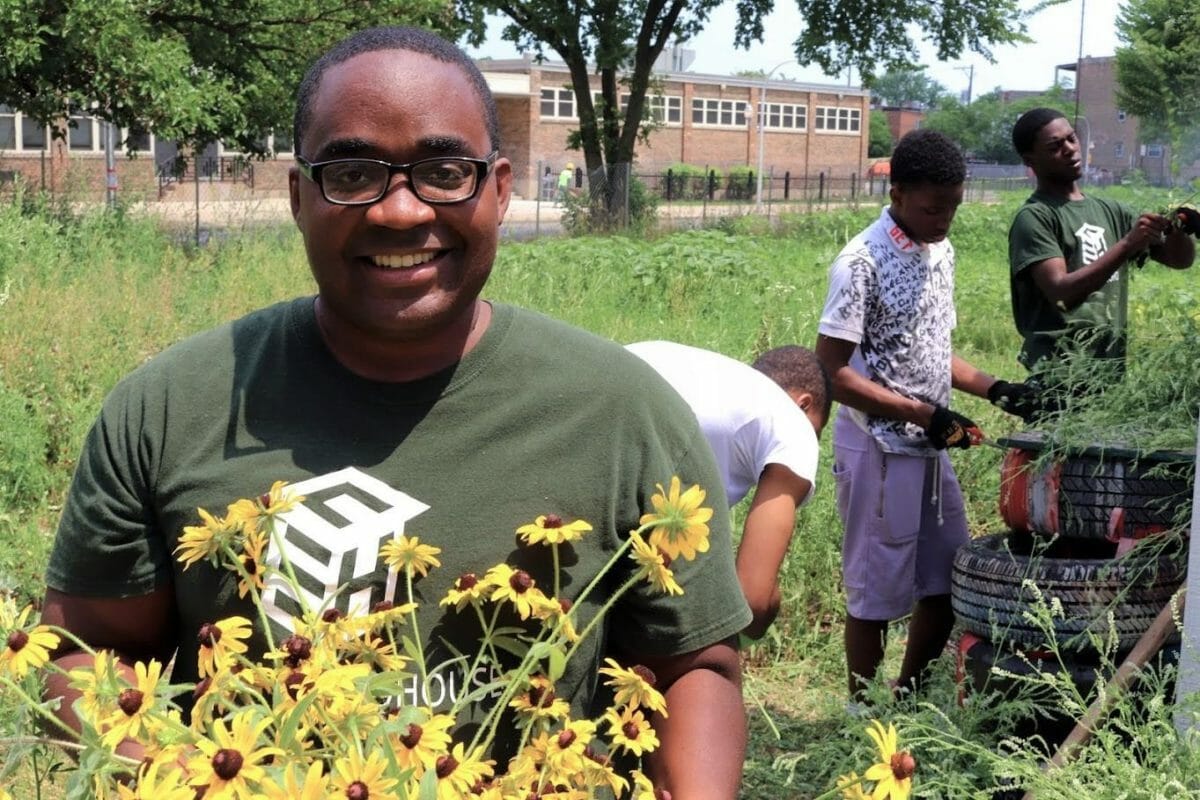 In some of Chicago’s lower-income neighborhoods, vivid varieties of zinnias, sunflowers, lilies and tulips have been sprouting up in vacant lots. For Quilen Blackwell and his team of farmers who planted them, these blooms tell a story of a community that is growing towards a better future.

When Blackwell first moved to Chicago in 2011, he did so to go to ministry school, where he was required to do community service, tutoring students at a local high school in the predominantly African-American neighborhood of Englewood. Blackwell saw kids that were victims of their surroundings, as the neighborhood has high rates of poverty and health inequities.

“Poor African Americans, particularly young people, are left behind,” he says. “Most of these kids don’t actually want to be involved in violence and crime, because they’re not stupid, they know the risks of it. It’s just that they don’t really think they have any alternative.”

Since then, Blackwell founded a farming non-profit called Chicago Eco House, which hires at-risk youth who have gotten mixed up with gangs.  Originally he thought the organization might grow food, but then in 2017, he decided that flowers would be an economically sustainable choice, as 80 percent of blooms sold in the US are imported. After long days of research and experimentation in floriculture, Blackwell launched Chicago Eco House as a working organic flower farm with an in-house flower shop, Southside Blooms. Both run on a combination of private donations, government grants and bouquet profits.

Blackwell hopes that the organization will become a force that creates jobs and alleviates poverty. The young people the organization employs help plant, cut and sell flowers on various vacant lots throughout Chicago and one location in Detroit that all add up to be about an acre. It’s the first year they’ve been able to put their flowers on the market. And though they’ve started small, Blackwell says there has been an incredible demand for their product. In the spring, when they first advertised that they were selling bouquets on social media, they sold out in three days. The week after that, they sold out in a day and a half.

So they decided to launch a CSA for the summer, which has accumulated 451 orders. This has put his team to work, Blackwell says, and shown their youth that there’s a place for them that isn’t on the streets.

“For the kids to actually see that they’re contributing and adding value and that their life matters and that we need them, those are big deals,” he says. “I feel like a lot of those things could only happen in an agricultural environment.”

Blackwell adds that he believes his farm has brought people together in recent times of unrest and division. Customers, who have come to the farm or picked up orders made in their flower shop, have been able to interact with the youth and learn about the collective effort to transform the community.

Blackwell is hoping to expand over the next few years. He’d like to double the farm’s CSA membership and grow the crew of at-risk youth to 20. In about three to four years, he aims to add another three or four farm locations in Chicago and once he has more capital, he hopes to build some greenhouses to extend the growing season past its six months. Now that they’ve successfully broken into the local market, it’s important to build on that momentum, Blackwell says, and move towards greater transformation.

“Being on a farm, things are still growing… the sun comes up, you have to go and water your crops,” he says. “It’s just like a reminder that there’s still hope, there’s still a future and Mother Nature’s still at work. There are a lot of people who wake up every day who participate in this larger agricultural story… all isn’t lost.”

Amazing accomplishment young man. I am so proud of you. I will be donating to your organization.