This Former Teacher Has Moved Her Classroom to the Farm

Scarlett Salamone is still educating, just in a different setting. 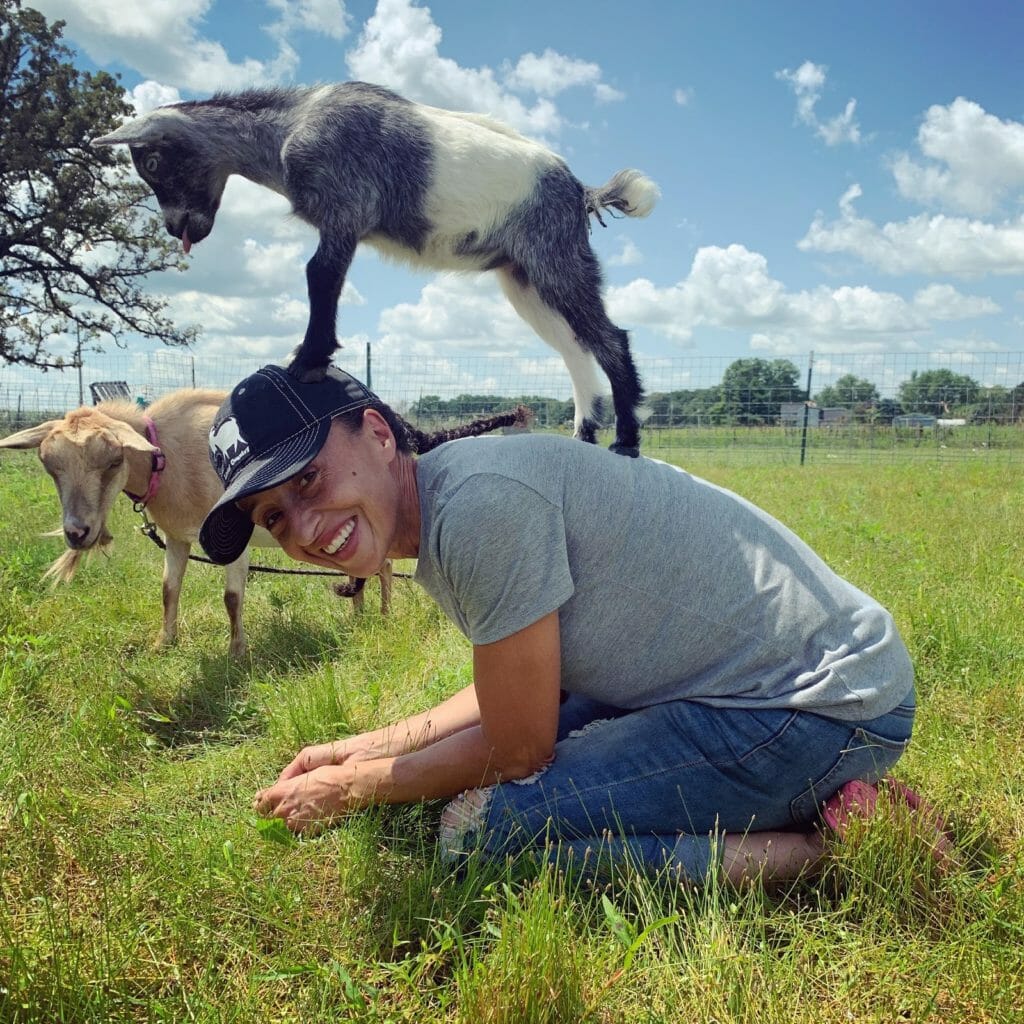 Nine years ago, Scarlett Salamone’s life was hanging by a thread.

She was struggling through chronic pain, having been diagnosed with lupus and gastroparesis (a disease that affects digestion).  And at a frail 96 pounds, she was unable to stomach any food she tried to put in her body. Her health had deteriorated so badly that it abruptly ended her teaching career at a school in Milwaukee.

“I had found my passion …and was just hitting my stride when my body failed,” she says. “My doctors were giving me the choice to get a feeding tube or die a slow death due to malnourishment.”

Reluctant to use a feeding tube, Salamone tried to research possible dietary alternatives. She stumbled on raw goats milk and learned that it had a high nutritional value, and more importantly, it was easy to digest. She bought some goats to milk for herself. She found she was able to eat and digest raw goats milk, along with eggs from chickens that she already had on her property. Her chronic pain eventually subsided and she was able to get her strength back. She never returned to teaching. Instead, she decided to start a new venture, Loveland Acres Farm.

Over the past six years, the Black farmer has added more goats and chickens, jersey cows, ducks and sheep to her five-acre property in Elkorn, Wisconsin. She sells eggs, grass-fed beef as well as a variety of cow and goats milk soaps and lotions. These products are available on her online store, on her farm and at the local farmer’s market in Milwaukee. However, the most important aspect of the farm, Salamone says, is the learning space it provides to young people.

She mentors a handful of young adults aged 18-24 that help her with day-to-day farm production in exchange for a daily meal and groceries that they can take home. She’s also opened up her space to children once a week so they can explore her farm, and learn how to milk a cow. Salamone offers her tailored programming at a pay-what-you-can rate. She believes that no child should be deprived of an experience on a farm, regardless of their race or background.

“There are so many valuable lessons that nature, farming, growing your own food [and] animal husbandry give us,” she says. “As much as I was devastated to leave the classroom initially, I feel like it actually kind of opened the door to something that could be far more beneficial.”

As someone with a compromised immune system, the pandemic has forced her to be even more mindful of her own health. She’s made small adjustments like setting up hand washing stations, requiring mask wearing and ensuring that everyone is socially distancing when possible.

Eventually, she hopes to scale up her farm’s production and education programs. She also wants to integrate a community garden onto her property, and to be able to provide her mentees with a substantial wage. Overall, she hopes that she can help young people to make healthy food choices that empower them to take control of their food systems.

“I feel incredibly blessed to be a caretaker of this land and I don’t really look at it as ours. I think that’s why I long so much to share it with others,” she says.

Fantastic. I brought some gjetost (Norwegian goat chees) to a potluck and everybody loved it until they found out it was goat cheese–then ;they wouldn’t eat it. No accounting for stupid.

Beautiful work Scarlett! So very pleased you recovered with Gods good food and are sharing this dignified work with the young adults and children. I hope I can visit your farm some day. God bless you.

I have shared this article with my friends who really like agricultural blogs.