The former NFL star has tracked down a furry culprit through ‘Operation Save the Eggers.’ 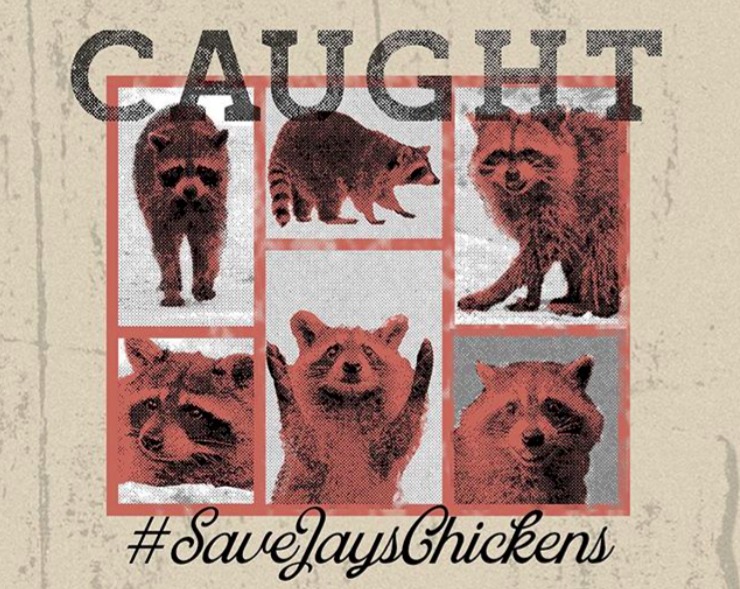 Jay Cutler is a man of many occupations: Football player, farmer, and now chicken murder detective.

About a week ago, the former Chicago Bears quarterback, who owns a farm in Nashville, kept coming across grizzly decapitated chickens on his property. He spent the following days consumed with trying to find the culprit. He took to Instagram to document his pursuit of the heartless creature that was responsible for ripping his chickens’ heads off. This week, a break came in the case, as Cutler caught the alleged chicken killer in the act…. It was a raccoon.

Cutler first started documenting his sleuthing on his Instagram account, @ifjayhadinstagram, on June 24, as he was reeling from the loss of a few birds.

“We’ve got a chicken serial killer on the loose. We’ve lost quite a few,” he said in a video posted to his account. “Tonight we’re going to set up a trail camera to see if it’s a coyote, bobcat, raccoon. It could be anything– not sure.”

Over the course of his “investigation,” the 37-year-old mused about whether the murders could be an inside job, identifying his cat Thelma as a prime suspect. He also put his rooster in charge of security and appealed to followers to see if they could guess who the chicken killer was.

Sometimes you have to fight crazy with crazy. Ole Blue has that look in his eyes. New sheriff in town. Predators beware.

This soon attracted the attention of gun retailer Christensen Arms, which gave Cutler a free rifle to protect his chickens. The company also set up a contest, inviting the public to guess what kind of animal was killing the birds. The winner was awarded a free gun and a $1,000 gift card to its web store.

If you followed this series of events, you know it wasn’t an easy mystery to solve. Cutler experienced some malfunctioning cameras and empty traps that caused him frustration.

“I’m being taunted, mocked and outwitted by a small animal,” he wrote in an Instagram post this week. “Only one option left.”

I’m being taunted, mocked and outwitted by a small animal. Avoided the trap and all the other cameras. Only pic from last night. Only one option left.

He eventually figured out that the killer was a raccoon after he camped out in a tree with his rifle and some night vision goggles. Cutler informed followers that his search was over on Wednesday, but didn’t elaborate on whether he shot the trash panda, or caught it in a trap.

Despite closing the case and holding the perpetrator accountable, Cutler said he’s keeping his eyes peeled for any of the raccoon’s “family members,” who might try to avenge their chicken-killing relative.

Any fool can fence in a chicken. I see this with first time owners.
That is not sufficient.
Done correctly, one is fencing out the rest of the world, which is much harder.

If the predator can get to the chickens, they are not properly protected. Unless we are talking about a very large predator, such as a bear that can go through wire of any reasonable weight, this is not a story of a predatory raccoon, but an competent chicken owner. If the real problem isn’t fixed, the Raccoon’s relatives will be back, as will coyotes, dogs, bears, and cats. Everyone likes a chicken dinner.
What? You think the world owes farmers a predator free environment? Sorry, the world doesn’t work like that. You’ve got to share.

If you keep chickens, you are responsible for building a proper coop to protect them. Wire fencing dug into the ground 2 feet is often necessary to keep raccoons out. When someone leaves garbage out in bear country, they are fined because it attracts bears. Chickens will attract many predators and it’s ridiculous to think the answer is traps or guns to shoot them. More will come. Just build a proper coop.

Wire fencing, or actually, any type of fencing can protect poultry from an animal with hands for paws, that dens in hollow trees. The only reasonable way to keep predators away from your birds is to build the coop with a vertically sliding door, that gets closed when the birds go in to roost. That will exclude skunks, opossum, coons, and other large predators. Rats, weasels, and other small guys will likely take some flashing metal, to seal the small holes that will be chewed in any building containing grains, and fresh meat. Metal cans make good patches. Both ends,… Read more »

Popular
7 Smokable Plants You Can Grow That Aren’t MarijuanaBrian Barth
Hell in High Water: The Story of Devils Lake, North DakotaSharlene Breakey
Record-Breaking Egg Profits Prompt Accusation of Price GougingClaire Carlson, The Daily Yonder
6 Differences Between Llamas and AlpacasAndrew Amelinckx
New Solar Panels Allow Farmers to See the LightNaoki Nitta
Explore Modern Farmer
Related
Books, How-To, Lifestyle
How to Turn Your Garden Into a Business, No Matter the SizeEmily Baron Cadloff
Aquaculture, Technology
Can Interactive Mapping Tools Guide Shellfish Restoration?Bridget Shirvell
Lifestyle, MTMF
Meet the Farmer Helping Black Kentuckians Return to Their Agricultural RootsKelly Magyarics
Animals, Health, news, Technology
First Vaccine for Honey Bees Approved by USDAEmily Baron Cadloff
wpDiscuz
We use cookies on our website to give you the most relevant experience by remembering your preferences and repeat visits. By clicking “Accept”, you consent to the use of ALL the cookies.
Cookie settings ACCEPT
Privacy & Cookies Policy