Journey to the Center of the Beehive - Modern Farmer
Animals, Lifestyle

Journey to the Center of the Beehive

Meet Bioni Samp, the beekeeper and musician who wants you to learn about the plight of bees. 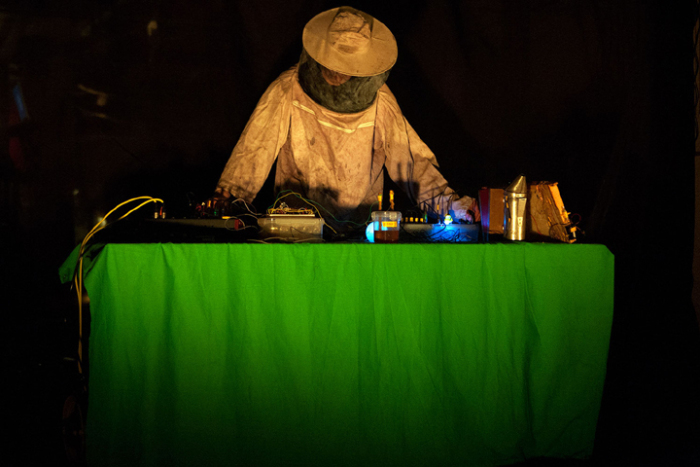 Bioni Samp remembers when his father used to scrape an inch of splattered insects off his windshield after a drive through the English countryside. As the years went by, the number of bugs on the same drive seemed to dwindle.

The collapse of insect populations, and specifically bees, has become Samp’s life work, as the beekeeper has looked to shine a spotlight on the issue through music.

Samp’s music blends recordings of bees buzzing and humming with electronic music. Samp records bees using a digital recorder attached to a special frame he made with microphones. He inserts this frame into a bee hive for hours, and then returns the next day to collect the recorder, and download the files onto his computer.

He has managed to isolate the sounds of different bees—queens, drones and workers—using frequency filtering software. He says that queen bees make a high pitched piping noise, workers do a gentle humming, and drones produce an even deeper kind of humming. Samp has built his own synthesizers based on these bee sounds.

The result is a wall of sound, which Samp hopes will make people think about their relationship with nature. The buzzing of bees can seem rather calming, but Samp says he tries to channel their rage and agitation.

“Bees can be relaxed and meditative, but they can also be very angry,” he tells Modern Farmer from his home in London, UK. “Obviously at the moment, they’re very angry with humans.”

Samp started making his bee music in the 1990s and has since performed at festivals across the world. When he performs, he wears a beekeeping suit. Some of his favorite gigs have been when he has done impromptu performances in the street, connecting directly with people walking by. 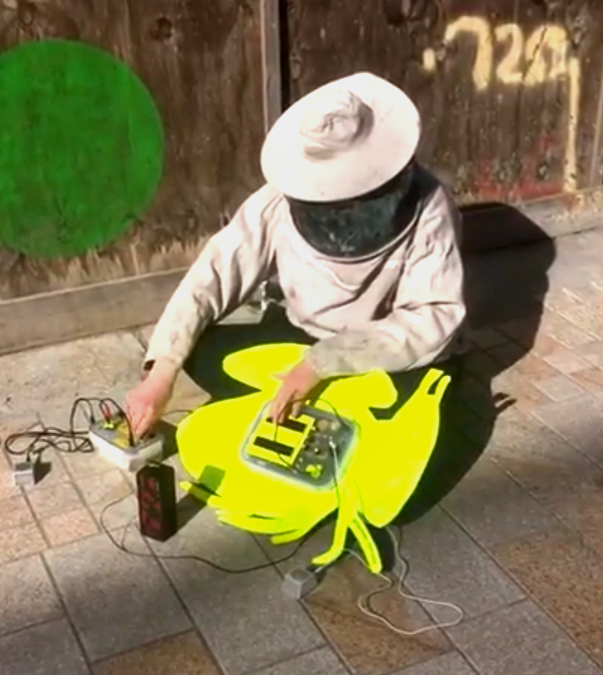 Bioni Samp performs in the streets of Hull in 2017. Photo courtesy Bioni Samp.

Samp hopes his music gets people interested in the natural world, and raises awareness about the plight of bees. As pollinators, the health of bees is inextricably linked to agriculture, and the future of the planet. Samp says that you can’t force people to suddenly become interested in the natural world, but if you show them exciting and interesting examples, they might be inspired to learn more.

“Quite a lot of people don’t even hear the bird in the tree outside over the din of television,” he says. “So most people are really surprised in a way that the natural world has so many things to offer.”

Bioni Samp is a pseudonym the musician uses to hide his identity. He says his name is a very common name in the UK, and that there are several DJs already using it. He also wanted to use a pseudonym as he didn’t want the focus to be on him and his personality.

“I didn’t want people to know whether I was vegetarian or what kind of toothpaste I use, or do I drive a car. I just thought that was all irrelevant to the bigger mission, which was to raise awareness about bees,” he says.

“Everything else is secondary. Whether I like smoothies or not doesn’t really matter.”

He chose Bioni, after the 17th century Italian composer, Antonio Bioni. He also wanted a name with “bee” in it. Samp is “sampler” shortened.

Samp hasn’t been doing much during the lockdown, but he still makes music most evenings. He says the pandemic has provided an opportunity for people to reconnect with nature, and that there’s never been a better time to get involved in ecology, conservation and self-sustainability.

Related
Animals, Health
Bird Flu Is Back in the USDan Nosowitz
Environment, Lifestyle
Building a Better BarnAnne N. Connor
Animals
Wilbur-Cruce Horses: The Biggest Secret in RanchingJudith Matloff
Cookbooks, Recipes
5 New Cookbooks We’re Finding Comfort In Right NowShelby Vittek
wpDiscuz
We use cookies on our website to give you the most relevant experience by remembering your preferences and repeat visits. By clicking “Accept”, you consent to the use of ALL the cookies.
Cookie settings ACCEPT
Privacy & Cookies Policy