Bonton Farms aims to transform a community with fresh food. 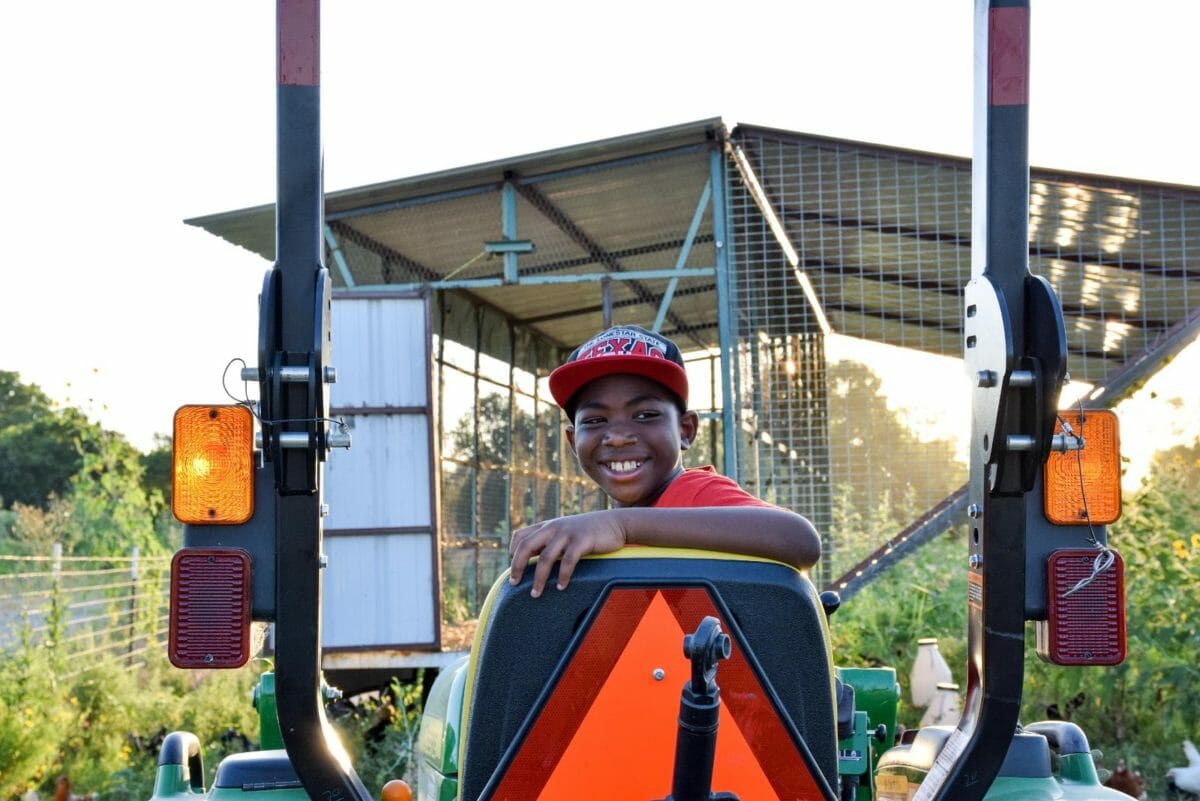 Fresh food has not always been accessible in the south Dallas neighborhood of Bonton.

It can take residents of the food desert up to three hours to travel to the nearest grocery store and back. The historically African American neighborhood has high rates for diabetes and heart disease, and the lowest average life expectancy of any zip code in Dallas. Around a third of Bonton’s residents live below the poverty line. Workers at an urban farm called Bonton Farms are hoping to change all of that.

The farm’s manager, Danny George,  was born and raised in Bonton. He grew up making the long trek to the grocery store on the bus. “It was kind of a headache,” he says of the long commute, which would limit the type and amount of groceries his family could buy. The closest places within walking distance for food in the neighborhood for a long time were the nearby liquor stores, which only sold over-priced and processed products.

But George and other residents have seen the neighborhood’s access to fresh produce change in recent years thanks to the work done by the farm he manages.

Bonton Farms was founded by Daron Babcock, a former VP of a private equity firm. Babcock moved to the neighborhood around eight years ago. He launched a one-acre farm in his backyard after consulting with the local community. He says he thought starting an urban farm might help alleviate the illnesses and unemployment in Bonton.

“I kept asking, ‘what’s going on here,’” Babcock says.  “In my mind, it was like a Flint, Michigan thing. Maybe this community was built on an old landfill? Maybe the water was bad? Something had to be wrong with this place and as I asked questions about it, they said ‘no, this is a food desert.’”

Babcock says food insecurity is the root cause of many social issues and that he hopes starting a farm can tackle them while also providing work within the community. Since 2014, Bonton Farms has expanded to include a 40-acre extension farm, a farmer’s market and café. The community’s locally grown produce, eggs, honey and pork are sold to Dallas restaurants, visitors of the farm and the Dallas Cowboys’ training facility in Frisco.

Bonton residents are able to purchase fresh food at a reduced price. Those who are unable to afford the produce can participate in what Babcock refers to as an honorable transaction. This means that community members can volunteer their time on the farm or provide something they feel is the equivalent value in exchange for food. “People get what they need here, but also walk out dignified… We want to keep everybody working and everybody feeling full,” Babcock says.

The farm currently has 37 employees and 44 paid interns, according to Babcock. Doris Young is one of those employees. She has lived in Bonton since she was five years old. Before she started working at the farm, she was struggling financially. “I had no idea how I was going to make ends meet,” she says.

Young now has a driver’s licence, a car and a clean bill of health. She says that having access to farm-fresh options has helped tackle her high blood pressure.

George, who has been working as a farm manager for three years, says Bonton Farms serves as so much more than just somewhere food is grown and sold. It has helped foster a sense of community, he says, and improved people’s lives through education and support. “The farm, it created a safe haven, something we didn’t have,“ he says. 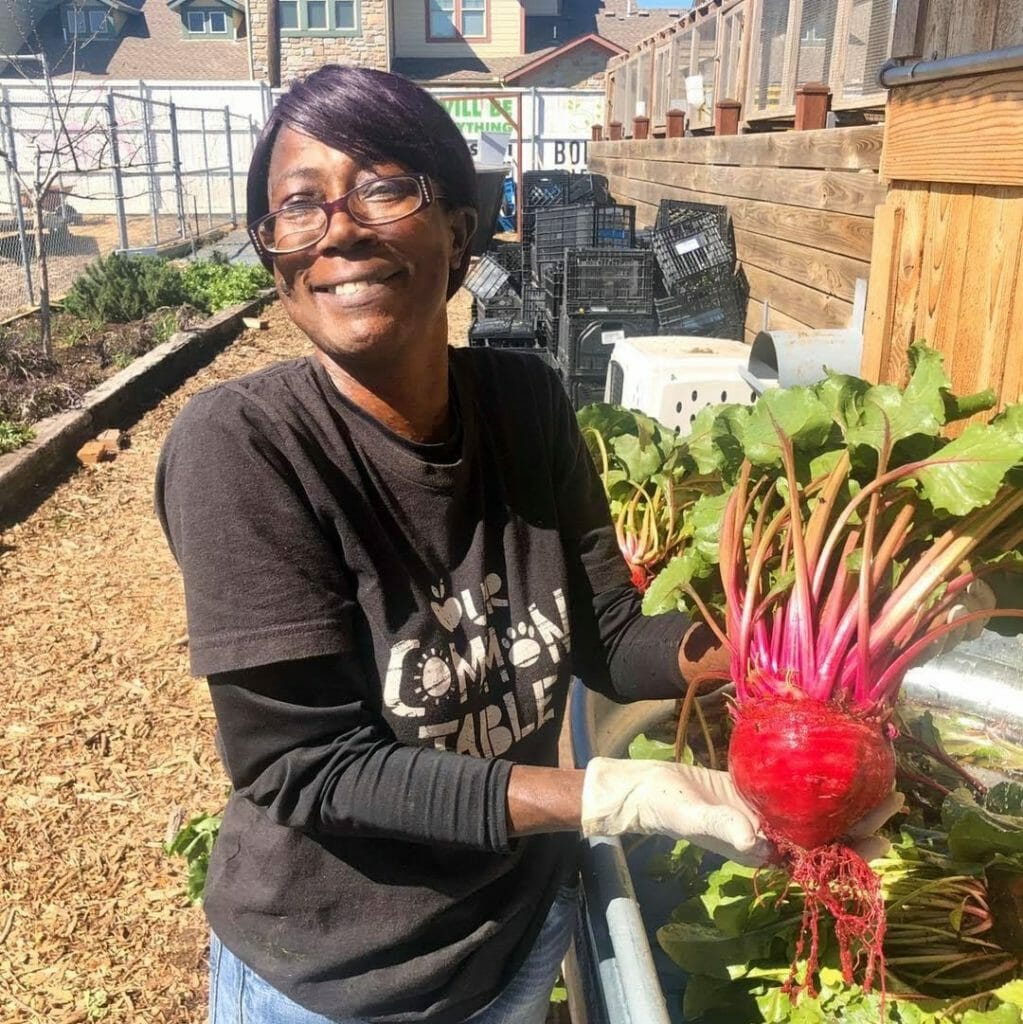 Doris Young has been working at Bonton Farms for four years. Photo courtesy of Bonton Farms.

“This is something that I’ve always needed,” Young says. “It’s impacted in so many different ways: mentally, spiritually, physically. It has given me new confidence that I didn’t know I needed.”

But the impact, she says, goes beyond her success, adding that the farm’s existence has allowed her family and friends to have an opportunity to put good food on their table at the end of the day.

“Just to see the community come together to be better and to live better, it’s just amazing to me,” she says. “To know that I am a part of that, it’s just great.”

In the future, the farm plans on opening a preservatory, to have a place where preserves can be sold and residents can learn how they can store their home-grown products for the long term. Babcock says he hopes that Bonton Farms can inspire other communities that have experienced similar issues to take action.

Awesome, a great example of how community can come together to help each other. This is isn’t just about food

GREAT ARTICLE, I work in Hemodialysis, PUT ME OUT OF A JOB!!! Reminds me of the ‘Getto Gardener Ted Talks several years ago

I liked the article, home farms are always very helpful, people should have some knowledge on these topics, it is good to cultivate some things that we need daily … very good information, greetings.