How a Blind Woman Adopted a Life in Farming 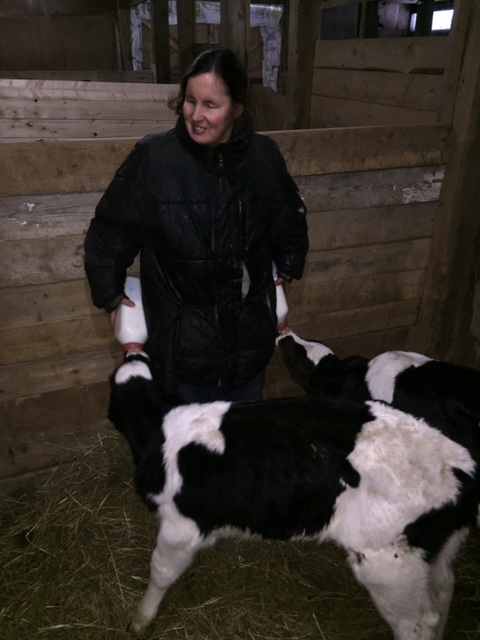 There are certain sensory moments that have shaped Rebecca Blaevoet’s understanding of farm work that most people wouldn’t have to think about.

For instance, how the texture of a calf’s ear compares to the nose of a goat or how a newborn rabbit feels in the palm of her hand as opposed to a calf that she has to hold in her arms.  “To get up close and personal with farm animals and even a garden, there’s something so life changing about that,” she says.

Blaevoet was born completely blind and she never thought her days would be filled with the strenuous work of farming. But a few years ago, she and her husband, Emmanuel, both owners of a print-to-braille company, decided that it was time to leave their life in the city. And they have found ways to make farming work for her.

In the fall of 2018, they bought a countryside property located in Canada’s Maritime province of New Brunswick and began their agricultural venture the following spring. They have rabbits, chickens, turkeys, sheep, goats, cows, pigs, ducks and even a donkey. Their garden, which Blaevoet describes as the size of an Olympic swimming pool, fits about 25 different crops.

Blaevoet admits that she didn’t exactly realize how many layers there were to farming until she was fully immersed in it, but it didn’t stop her from creating innovative ways to navigate what she calls a sometimes chaotic atmosphere.

“Often, people with a vision impairment are kept at arm’s length from the messier things in life. You immediately walk into a room and people say ‘sit down, I’ll bring you a cup of tea,’” she says.  “To be with nature and with animals and with all these aspects of life that you can read about and hear about, to have the chance to do it is significant.”

On the farm, Blaevoet comes up against a number of challenges. She sometimes has trouble hunting around for things and gets her hands far dirtier than farmers who can see. But she has made her tasks quite doable by staying organized and sticking to a routine with solutions she’s developed. For instance, she makes sure to wear gloves when she’s cleaning out the animal’s stalls or picking up her chickens’ eggs, as more often than not, she finds her hands in some manure.

To keep track of her animals and to avoid any horns to the head, she has her goats and cows wear bells around their necks. She has tacked up twine with stakes in the ground, delineating the garden rows, so that she knows each crop’s identifiable space. She also chooses to use short-handled tools because being closer to the ground allows her to track her progress.  And it’s rare that she’ll be without her guide dog, Karrie, or a white cane in hand. Both save her from the trouble of tripping over objects, she says, like pieces in the woodpile.

“It was gradual, discovering certain aspects,” she says. “Not being able to see, I wasn’t able to observe how farms are laid out even on television programs. You don’t learn by observing if you’re vision impaired.”

Blaevoet and her husband have a goal to break even or at least profit off of their farming lifestyle. Through word of mouth, they have sold some of their animals for meat and made some extra cash off of small amounts of butter and dairy.

The couple hopes that, eventually, their farm could become a safe environment where vision-impaired people come to learn about farming. It’s uncharted territory, she says, but she believes it’s important to expose blind people to a realistic farming experience with some awareness that it’s a path they can take, too.

name a goat after me

you guys are simply the best and we miss you!

Hats off to Rebecca and her lovely guide dog.

Kudos to you and yours for making it work. I’m visually impaired, helping rehab an old farm. Sometimes, it feels like nothing but manure, at others, it’s richly rewarding. Thanks for the boost.