How the Sweetness of Nectar Impacts Bumblebee Vomit

Sweeter nectar slows down a vital process for bumblebees. 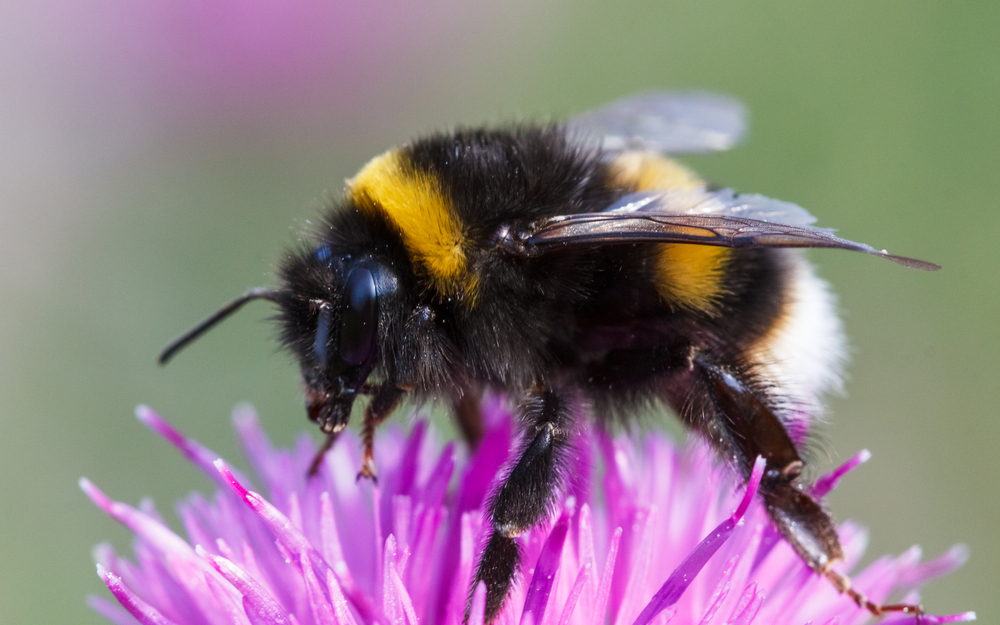 There is such a thing as nectar that is too sweet for bumblebees, especially when it comes to their vomit.

That was the conclusion of a recent study, published in the Journal of the Royal Society Interface, which looked at how sugar levels in nectar affect how quickly bumblebees vomit. Bumblebees drink nectar through their tongue and then regurgitate it through a tube into their nest for others to use. The faster they are able to complete this process, the faster they can go back out and pollinate more flowers.

The sugar in nectar makes it more appealing and has a higher energy level, but scientists have found that sweeter nectar is also thicker and stickier, making it harder to drink and puke back up. Previous research had shown that sweeter nectars slow down the rate bumblebees can drink, but the new study reveals that it also limits the speed at which bumblebees regurgitate it.

Researchers at the University of Cambridge timed how long it took for bumblebees to vomit nectar at different levels of sugar concentration. They found that sweeter nectar very quickly becomes harder for bumblebees to regurgitate. With low-sugar nectar, bumblebees were able to vomit quickly, within a few seconds, and then go back out to forage. But with some of the sweeter nectar, it would sometimes take them almost a minute to vomit back up the sweet stuff.

Bumblebees can generally retch up nectar faster than they drink it, but researchers found that as the sugar concentration of nectar rises, their rate of regurgitation actually decreases faster than the rate of drinking it. “It’s hard to drink a thick, sticky liquid, but imagine trying to spit it out again through a straw—that would be even harder,” said Jonathan Pattrick, the lead author of the study, and a post-doctoral researcher in the University of Oxford’s Department of Zoology.

This is all very important, as bees are vital pollinators for much of the world’s crops. So, the more efficiently they vomit, the more productive pollinating they can get done.

Researchers hope that their results can help scientists figure out which kinds of nectar and flower are most attractive to bumblebees and other pollinators, with the goal in mind to boost crop yields. Much of current crop breeding efforts are concentrated on things such as disease resistance and shelf life, but researchers are pushing for a bigger focus on pollinator preference.

THERE THEY GO SEEKING OUT SOMETHING ELSE TO TINKER WITH

I get that it helps to know which plants to grow more of in our gardens or on our farms for different pollinators, but when I hear the term “Crop Breeding” I myself want to regurgitate. When man or woman thought he or she knew better than what God knows, when it comes to crops, that was, in my good faith opinion, the beginning of our land getting into trouble.

Related
Personal Essay, Plants
Learning to Grieve and Grow In My Community GardenEsther Tseng
Animals
Consider the Lobster’s FeelingsLindsay Campbell
Environment
Extreme Floods In Pacific Northwest Send Farmers Into CrisisLindsay Campbell
A Message About Black FridayModern Farmer
wpDiscuz
We use cookies on our website to give you the most relevant experience by remembering your preferences and repeat visits. By clicking “Accept”, you consent to the use of ALL the cookies.
Cookie settings ACCEPT
Privacy & Cookies Policy