At Modern Farmer, we’re often exposing the injustices of the seafood industry. So we thought we’d sing some praises where due. 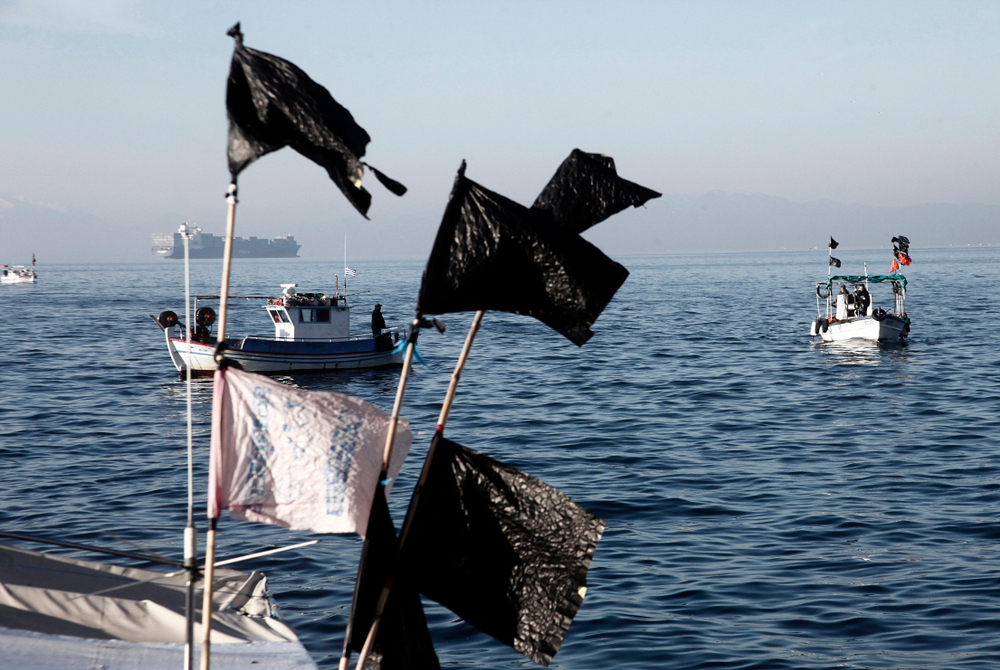 Greek fishermen stage a symbolic blockade of the harbor with vessels in a 2014 protest.
Photography by Alexandros Michailidis on Shutterstock
Share
Tweet
Pin
Email

Commercial fishermen have often been painted as a callous bunch. And to an extent, the reputation is deserved. In Southeast Asia, a sort of modern slave trade exists in the seafood industry, with disadvantaged groups lured by human traffickers onto boats where they are held in inhumane conditions, sometimes in cages, while forced to work the nets. In the southeastern United States, fishermen brought in the KKK to scare off Vietnamese fishermen who had come over as refugees in the seventies and were competing with locals.

Fishermen everywhere are notorious for flaunting environmental rules designed to protect endangered species and maintain the fish stocks on which the seafood industry relies. But there are plenty of good guys. And once in a while, the good guys have to go full eco-pirate to protect the seas on which their livelihood depends.

There is a long tradition in France of farmers and fishermen taking to the streets (or waters) to make their voices heard. In one of the most epic instances of such activism, French fishermen strung their boats together across ferry channels outside six port cities in the northern part of the country, where thousands of Britons go back and forth to the UK each day. The issue at hand: cheap fish imports flooding the French market from countries with terrible labor and environmental standards. The fishermen wanted the government to step up and find a regulatory solution. A few ferries managed to pierce the blockade, provoking the fishermen to hurl potatoes at the boats; the ferry passengers, mostly British tourists who had been waiting for days to return home from their vacations, hurled beer cans in return. With more than $1 million a day in lost profits to the shipping industry as a result of the blockade, the fishermen got the attention they were looking for.

Four years after the Exxon Valdez oil spill, 60 fishing boats blockaded the Trans-Alaska Pipeline terminal, preventing oil tankers from docking. The stunt was meant to draw attention to declining salmon stocks in the area since the spill, which the fishermen felt oil companies had not sufficiently cleaned up. They were successful: Bruce Babbitt, the Secretary of the Interior in the Clinton administration, intervened, helping the fishermen set up a meeting with oil industry representatives to have their concerns heard.

The salmon fisheries off the coast of southern Alaska straddle both US and Canadian waters. Canadian fishermen in British Columbia have long accused their American counterparts of overharvesting, rather than respectfully taking what the marine environment can support. In 1997, the Canadians’ angst boiled over, as a group of fishing boats surrounded an Alaskan tourist boat that was docked in a British Columbia port with more than 300 passengers, refusing to let it leave. At one point, an American flag was burned in full view of the Americans, who had effectively been held hostage on their vacation. According to newspaper reports, a flurry of anti-Canadian “taunts” ensued. “The Americans are raping the sea,” said one fisherman who was interviewed. “So we’re taking this ferryboat hostage in retaliation.”

In January 2018, a dozen French fishing boats lined up outside of Calais, the busiest passenger port in France, where ferries shuttle tourists and commuters back and forth to the UK each day. They also blocked the road leading to the port with vehicles. The fishermen were upset about the encroachment of Dutch boats using legal, but highly destructive “pulse” fishing equipment, in which an electrified net is pulled across the seafloor, giving a shock to all sorts of creatures besides the ones they are trying to catch.

The pristine waters of Canada’s Atlantic coast are among the richest fishing grounds in the world. But not long ago, a paper mill in Abercrombie, Nova Scotia wanted to build a pipeline into the nearby Northumberland Strait to dump mill waste. As boats commissioned by the company ventured out to survey the pipeline route, a group of fishermen blocked their progress and refused to move. The mill obtained a court injunction forcing them to disperse, but the stunt brought international attention to the situation.

Related
Cookbooks, Recipes
5 New Cookbooks We’re Finding Comfort In Right NowShelby Vittek
Is a Potato Shortage Affecting French Fries From Japan to Kenya?Dan Nosowitz
Animals, Meat
US to Export Pork to India For the First TimeEmily Baron Cadloff
Lifestyle, Technology
Take a Break with These Food and Farming Video GamesEmily Baron Cadloff
wpDiscuz
We use cookies on our website to give you the most relevant experience by remembering your preferences and repeat visits. By clicking “Accept”, you consent to the use of ALL the cookies.
Cookie settings ACCEPT
Privacy & Cookies Policy