How An Indian Farming Organization Is Trying to Save the Forest 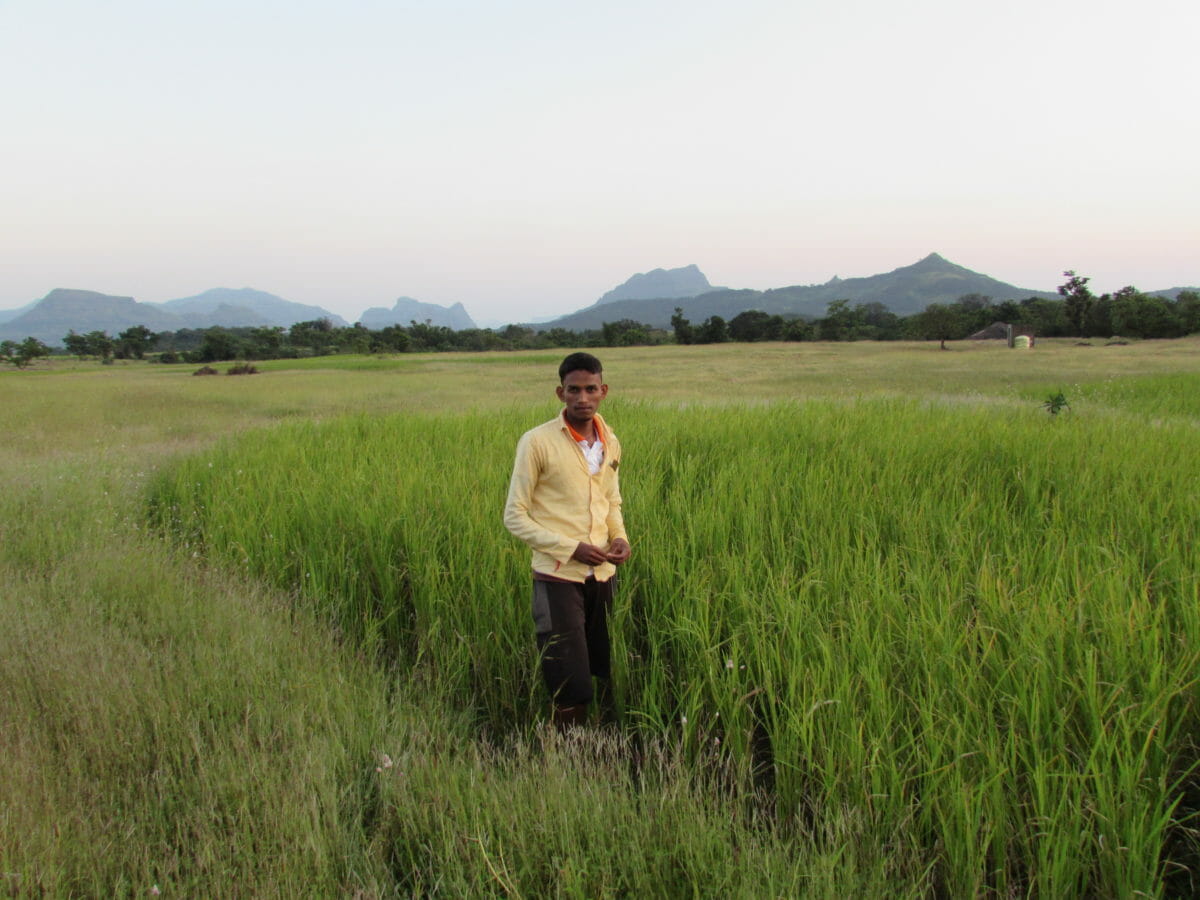 Navnath Maruti, a tribal farmer who is using seeds from OOO Farms, stands in a field of Ambemohar rice in the Sahyadris.
Photography by Tariq Engineer
Share
Tweet
Pin
Email
348 Shares

A couple of years ago, four friends gave up their comfortable jobs in Mumbai to form OOO Farms in the Sahyadri hills of western India.

The foursome (made up of Shailesh Awate, Abhay Bhatia, Pranav Khandelwal and Karan Khandelwal) wanted to do something about the growing deforestation taking place in the area. Awate has trekked the hills of this biodiversity hotspot since he was a young boy, and he had grown concerned about the issue.

After a little research, they realized that the local tribes who used to forage for food and practice subsistence farming were now growing produce to sell to urban markets. This was largely the result of road construction that began a couple of decades ago and linked these villages to Mumbai and the rest of the state. In order to grow their crops in paddies, the tribes were cutting down trees and clearing vast swathes of the forest. They had abandoned their traditional farming methods and were using government-provided hybrid seeds, fertilizer and pesticides that were damaging local ecology. “We realized these hybrid seeds were the villain. They had destroyed the crop diversity,” Awate said.

Looking to combine sustainable agriculture and environmental protection, the friends’ first attempt to tackle deforestation was to plant 500 saplings. Awate says only two survived and the rest were eaten by domesticated animals. Then they tried offering the hill tribes money to stop cutting down trees, but that didn’t work either. The four men then spent two months in 2017 criss-crossing the Sahyadris, covering more than 28,000 miles by Awate’s estimation, to soak up all they could about traditional farming practices and indigenous seeds.

Part of the solution OOO Farms came up with was to sell wild food villagers foraged in the forests to businesses in Mumbai. The centerpiece of this strategy is a collaboration with Bombay Canteen, a high-end restaurant in the city, in which OOO acts as the middleman between the tribes and the restaurant. The eatery has agreed to buy as much wild food as the tribespeople can provide (and all of the money goes back to the tribes). OOO also organizes wild food events in Mumbai where the tribes sell their foraged produce directly to consumers.

Awate says this gives the tribes an incentive to regrow and protect the forest, as wild greens need forest cover to grow. It also gives villagers regular income throughout the year so that they don’t necessarily need to expand their farms.

With support from BAIF Development Research Foundation, which aims to provide a sustainable livelihood to the rural poor through climate-resilient agriculture, OOO also started growing crops using native seeds, and it encouraged the local farmers to use them.

OOO trains farmers to follow sustainable practices and provides indigenous seeds for free, along with organic fertilizers. Today, OOO Farms works with more than 500 farmers in 30 villages and grows 30 varieties of indigenous grains and more than 100 types of wild food. So far, it has distributed three tons of seeds, sold 25 tons of produce and 700 kilograms of wild food. The organization sells its own produce at farmers’ markets in Mumbai, food events and on its website.

Villagers work in a field in the Western Ghats. Photo courtesy OOO Farms

Navnath Maruti, a 21-year-old tribal farmer living in the Sahyadris, uses seeds from OOO Farms. “If there was too much water, or too little, the [government seed] crop would be ruined,” he said. “That is not the case with the native seeds.” During a visit to Janewadi village in October, Maruti said the forest used to extend past their land, which is now almost devoid of tree cover. “In the last 10 years, people have been cutting down or burning the trees,” he said. “We need to save what’s left.”

Thank you for the interesting article.

In Assam, trees are widely planted among tea fields for relief from heat and sun. Do you know if tea planters in the Sahyadri have considered increasing their use of native tree species? This is one way to bring back the forest whilst providing a wage for the workers.