An excerpt from "Farming on the Wild Side: The Evolution of a Regenerative Organic Farm and Nursery," a forthcoming book about a couple's evolving relationship with an ecosystem and its inhabitants. 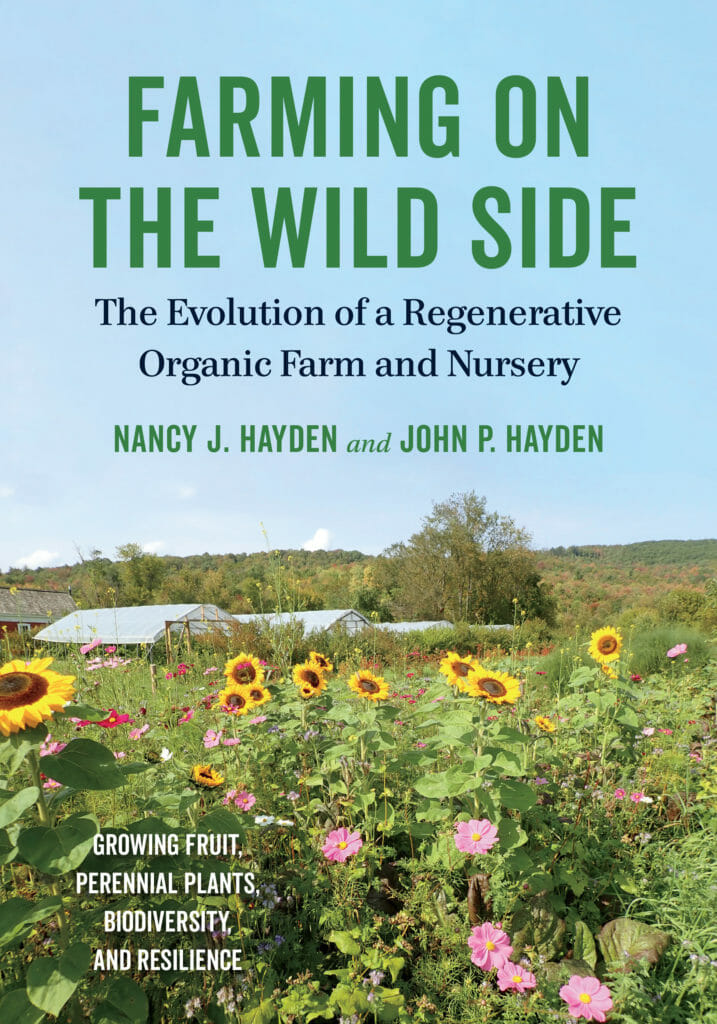 In their new book, Farming on the Wild Side, they unearth the philosophical and scientific principles that influenced them as they reverted their farm into a biodiverse, semi-wild state, phasing out sheep and potatoes as they embraced apples, pears, stone fruits, and uncommon berry crops. The Hayden’s story charts an evolving relationship with an ecosystem and its inhabitants, grounded in observation, ecological thinking, and the belief that native plants can teach us what we need to know about the land to see it thrive again.

The following excerpt is from Farming on the Wild Side: The Evolution of a Regenerative Organic Farm and Nursery and is reprinted with permission from the publisher.

As a farm that values diversity, we don’t have many biological enemies. At least we don’t think of them that way. Certain plants are allies in the places we want them, sequestering carbon, filtering water, and creating fertility, and become “weeds” only when they compete with our plantings. We do spend a fair amount of time and effort on weed management. For our crops to thrive, we need to keep the grasses and other weeds out of the propagation beds and berry bush plantings, and in check during the early years of fruit tree establishment. Weed management isn’t always easy, though. Plants have a lot of life force and want to grow!

We use a variety of techniques to keep the weeds at bay, including hand weeding, landscape fabric, and sheet mulching with cardboard close to the plants. Landscape fabric is great because it can be reused year after year, but it’s not a good idea to leave it down over the winter, because it provides a safe cover for voles, which can then be a problem in themselves by girdling trees and shrubs in the winter. There’s a pesky rodent! If we use proper vegetation management around bushes and shrubs, including vole guards on the trees, we can keep their dam- age to a minimum. They then become just another coinhabitant of the land. Did we mention that we like foxes?

We put nets on certain crops such as honeyberries, red currants, and blueberries before they ripen, to protect them from birds that are “pests” for only a short time in the summer. We take the nets off when we’re done with the harvest, allowing the birds to clean up the fruit. This strategy helps reduce other pest problems, like spotted wing drosophila, in our early berry crops.

Our diversity of crops allows us to withstand occasional pest out- breaks and potential crop losses by leaning on the income from other crops until a balance is reestablished. We depend mostly on biodiversity and ecological intensification practices to limit insect pests. We should differentiate here between pests and pest outbreaks. You some- times hear or read in alternative agriculture circles that pests on a plant reflect an unhealthy plant or soil conditions. We don’t think that is correct. We consider having a diversity of insects, including those that eat crop plants, as part of the natural balance. A pest outbreak occurs when the population of an insect increases to the point where it can cause high economic damage to a crop. A low level of pests keeps the predators and parasites fed and happy and working. Wiping every- one out with insecticides causes wild fluctuations in pest populations, as their populations tend to grow faster than predators’ populations.

If we grew only one crop, with clean fields and field margins, we, too, would be anxious about pests and potential losses; so we can understand why monoculture farmers turn to pesticides for insurance and assurance. But it is a treadmill, and we don’t understand why they keep insisting on monocultures. Of course, the chemical companies know how to exploit fear with their marketing. Many of the pesticide advertisements in the trade magazines look like horror movie bill- boards, with giant caterpillars and their gaping fangs coming to get you. Pesticide companies are not necessarily the farmer’s friend. They are more like parasites themselves, making their living off farmers. A good parasite doesn’t kill its host, though.

The goals of efficiency and economy of scale (which is purely about maximizing profits) are still part of the mainstream cultural mentality in our society. We’ve shown that a small-scale diverse farm has certain ecological and economic advantages. We try to be efficient in our labor and harvests, but it’s not critical to our bottom line to wring every last berry from the land. We can afford to share a little with our coinhabitants. As regenerative farmers, we’re trying to find the right balance for us and the so-called pests to coexist.

This isn’t to say that it’s all unicorns and rainbows at our farm in Vermont, The Farm Between. Pest outbreaks occur because of things beyond our control— like the weather or newly introduced pests such as Spotted Wing Drosophila (more on SWD below). There’s this idea floating around that if you have a biodiverse organic farm with good soils and good management that everything will be pest resistant and in perfect balance all the time. No way. Species populations are cyclic; outbreaks and subsequent crashes occur. That’s often how an overall balance is maintained.

This little fruit fly, Drosophila suzukii, has become enemy number one of berry growers in much of the United States. Originally from Southeast Asia, it was first noticed in California in 2008 and has since spread throughout the United States. It made its way to Vermont in 2012. We first found it in our everbearing strawberries toward the end of June that very year. When we realized what was making the berries mushy, we panicked and tilled the whole patch under, hoping that would prevent the fly’s spread to the rest of the farm. In hindsight, that was pretty silly. After all, you can’t keep a pest like SWD out.

Unlike the regular old vinegar fruit fly that can only lay her eggs on rotting or damaged fruit, SWD females have a knifelike serrated ovipositor—the egg-laying part of the female—that can cut into unripe and undamaged fruit. After cutting her way inside, she typically lays one to three eggs. The males are easy to identify because of their spotted wings. The adults and possibly pupae overwinter in leaf litter, duff, and rotting fruit. During the growing season, adults typically live for a few weeks. A female can lay three hundred or more eggs in her lifetime. Depending on the temperature, it takes a week or two to go from egg to adult, but they can cycle through many generations per growing season if you have a variety of fruit, as we do. As the season progresses, their populations can increase to damaging levels.

We no longer grow everbearing strawberries, not only because of the SWD, but also because we want to stick with perennial fruit. We’ve never seen them in the honeyberries, another reason we love these early berries. They show up in the blueberries usually after a couple of weeks into the picking season. When our fall raspberries start ripening in August, it might be a week or two before we start noticing damage. They’re in the elderberries come late August and September. We’ve even seen them in fall native fruits such as highbush cranberry and silky dogwood and wonder what the ecological ramifications are of reducing these food sources for wildlife.

SWD numbers and their damage seem to vary based on the weather. They don’t like it hot and dry. Unfortunately, the weather is beyond our control. Damage also varies based on picking hygiene, and this is within our control. Picking often and picking clean is the best way to curb their numbers and their damage. This also means sorting berries during or after picking. We need to do this anyway for other pests such as slugs, snails, Japanese beetles, and birds. Usually, the impact of these other pests is minimal, however. SWD can be severe if we’re not careful. The times we’ve been lackadaisical about picking regularly, or when other people pick who aren’t thorough, are the times we might find considerable numbers of SWD-damaged berries.

We try never to leave mushy berries on the bush. The really damaged berries get solarized in clear plastic bags if the numbers are high, or in the case of raspberries, we smoosh them onto the black plastic walkways or in the dry duff in the greenhouse floor when there are only a few. If this doesn’t kill them outright, it will cause the larvae to dry out and die. Lightly or slightly damaged berries can still be used to make fruit syrups. Berries with no visible damage are sold fresh or frozen. The raspberry receptacle that is left on the stem after picking will be white when there is no damage and stained pink if a “young one” (code for SWD maggot) has been feeding there.

Even though we don’t like this new pest, we’ve gotten over it to some extent. We figured out how to manage and live with it. We accept that we’re going to have losses, which might be as high as 20 percent in raspberries, given the weather and management conditions. With a wet summer, elderberry losses can be even higher. We’ve experimented with netting individual elderberry panicles using the type of nylon sock that shoe stores use for trying on shoes. Enclosing the panicle of green fruit within the nylon sock and closing it off at the stem with a twist tie prevents access to the fruit by SWD but allows the berries to ripen. Given the time involved to sock each panicle, we figure this makes economic sense only when SWD numbers are high and with big-berry, heavy-producing varieties like Marge.

Nancy Hayden has an MFA in creative writing and is a retired environmental engineering professor at the University of Vermont. John Hayden has served as a pest management researcher, extension agent, international consultant, and university educator. The Haydens have been owners of The Farm Between in Jeffersonville, Vermont, since 1992.

With SWD, if I see liquid in a picked raspberry, I know the SWD are there, the inside of the berry should be dry. A different view of what you said about the pink core. So we started vegetable farming on old cow pasture in NH, not farmed for 10+ years, not ever(?) used for vegetables. How did the Colorado potato beetle know we planted potatoes? How did they find us? There are no other vegetable farms nearby. We were infested! This year, we didn’t plant potatoes and there are no CPB, where did they go? Are they just waiting… Read more »