On Swarms and Stings

An excerpt from "Dancing with Bees: A Journey Back to Nature," a forthcoming book about reconnecting with the natural world and discovering a love for bees. 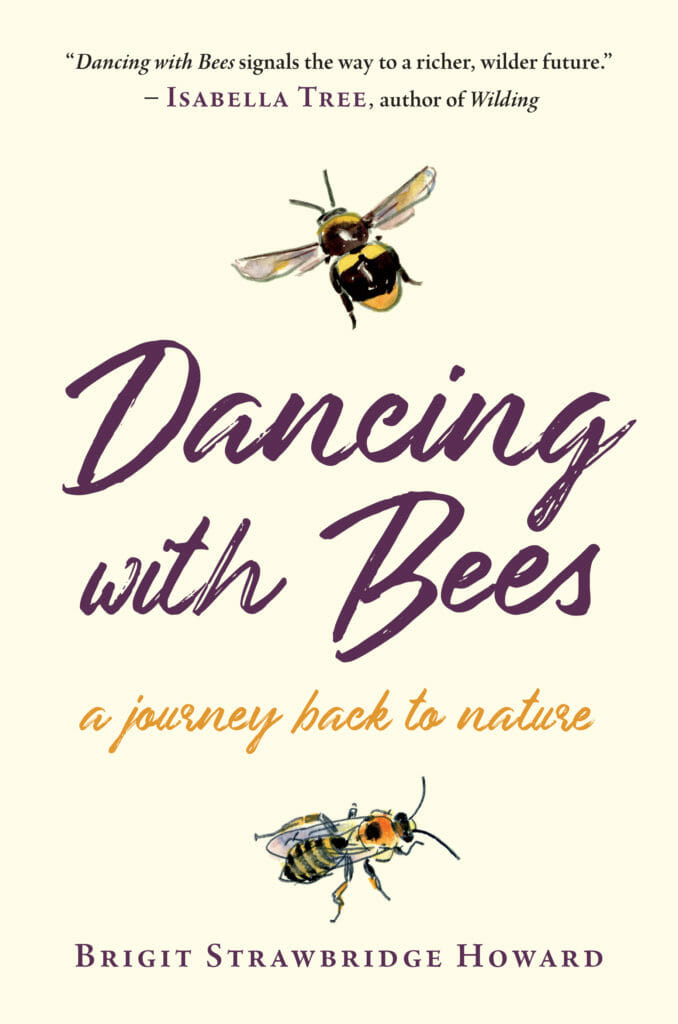 The following is an excerpt from “Dancing with Bees” by Brigit Strawbridge Howard. This book is Brigit’s account of a return to noticing, reconnecting with the natural world, and discovering a particular love for bees. Throughout, she contemplates the importance of biodiversity, considers the impacts of climate destabilization, and offers practical advice on creating pollinator gardens that nourish the creatures that give us so much without our notice.

Between late spring and midsummer, my inbox, mobile phone, and social media timelines fill up with messages from people asking for advice about bee swarms. As my husband Rob is a beekeeper, my first thought when I see the word ‘swarm’ is the process by which a resident queen honeybee leaves her hive, accompanied by thousands of her loyal worker bees, to search for somewhere suitable to set up a new colony.

So, if it is clear that the enquirer has seen a honeybee swarm, I typically suggest contacting the local beekeeping association, which will more often than not send a swarm collector out to them. However, if the enquirer is local to us, Rob himself will often jump in the car with his bee suit and an old wicker laundry basket to see if he can catch the bees and bring them home. Beekeepers love nothing more than to retrieve and rehome a swarm of honeybees, and if we don’t have a spare hive ourselves, there are always other beekeepers in the area who are delighted to take the swarm off Rob’s hands.

Taking a container of some sort to catch the bees is a necessity, as is making sure your container has a lid that closes properly for the journey home.

Wearing a bee suit, though strongly advisable for anyone inexperienced, is not. Some beekeepers tend to their bees without protecting themselves in any way whatsoever; the wonderful Heidi Herrmann, president of the Natural Beekeeping Trust, has a video online in which she catches a mid- summer swarm, gathering them up by hand into a skep (a wicker beehive), before gently coaxing them into one of her empty hives – all whilst wearing only her light summer clothes. This takes a leap of faith and a lot of trust on the part of the swarm catcher, and is certainly not for everyone. In Heidi’s case, the swarm was from one of the hives she keeps in her garden, so she already knew the bees and they knew her.

Heidi had not always been this comfortable around bees. Indeed, a fear of being stung was one of the first obstacles she needed to overcome when she took up beekeeping around twenty years ago. She approached this slowly, starting to leave off items of protective clothing such as gloves and veil, until eventually she was able to open a hive without any protection at all. Heidi describes the moment as ‘a kind of unity’.

Rob prefers to wear a suit, especially when dealing with bees of unknown origin.

Honeybees are actually less likely to sting whilst swarming than at any other time. This is because, prior to swarming, the bees gorge themselves on honey, so are more docile than ever. They are also so full up, and their honey stomachs so distended, that they are less easily able to curl their abdomen under to sting.

Some swarms are easier to collect than others, involving nothing more than gently brushing or shaking the swarm into a container. Ladders are occasionally needed, as are screwdrivers or other tools, if the swarm has decided to try to make a new, permanent home inside (for instance) a dovecote or underneath some floorboards.

The most difficult collection Rob has ever undertaken was not a swarm, but a wild colony that had some years ago established itself between the outer and inner walls of Sutton Waldron village hall. The village hall committee had asked other beekeepers in the area if they could help, but there were no takers, possibly because a cursory inspection revealed that the outer, wooden wall of the hall would need to be completely dismantled to reach the colony. This would be extremely time-consuming, and catching the queen – essential to the survival of a colony – would by no means be guaranteed. Workers were coming in and out of the hall in ever increasing numbers, and as the space was used regularly for community activities (including a mother-and-toddler group), the committee had reluctantly determined that the bees would have to be destroyed if they couldn’t be removed. Rob stepped up as their last hope.

Rob loves nothing more than a challenge, so over the next four weeks, he slowly, painstakingly, and extremely gently dismantled the outer wall of the hall, exposing an enormous honeycomb that spanned a number of the joists and extended up into the roof. The colony had clearly been living here for quite some time, and had grown so huge that it could no longer be contained inside the wall – which was why people were getting more and more bothered by the bees.

Rob quickly worked out that the colony was so large, it would need to be removed in two parts. He had attached a tarpaulin to the side of the building whilst he worked, because although the weather was warm, it was also very wet, and the exposed comb needed to be protected between his visits. Then late one Saturday evening, after warnings of upcoming storms and heavy rains, Rob had to commit to removing those bees that he could access, and just hope the queen would be amongst their number. Aided by one of the villagers, he took a knife and cut off the exposed part of the comb, complete with brood cells and many thousands of worker bees, allowing it all to drop into a cardboard box.

Only when he started to cut the comb away could he see that the bees had built their comb around the nails that held the outer casing of the hall to the inner casing. As the bits that were not attached to the nails fell into the box, he realised the queen was probably amongst the tightly clustered group of bees that had made their way up into the roof whilst he had been working.

Rob doesn’t give up easily. Against the clock, he made a long, thin makeshift box, tucked it around the comb remaining just beneath the roof space, and left it there overnight. He hoped the queen and those workers he hadn’t already caught might crawl back down to this comb, which was still attached to the side of the hall but also now contained in his makeshift box.

We came back again late the following evening so that Rob could prise the comb inside the makeshift box away from the wall. This final part of the rescue – for a rescue is what it had become – was executed with great precision in pelting rain. Sometime shortly before midnight, we drove home, exhausted but jubilant, with tens of thousands of bees and giant chunks of honeycomb divided between two boxes in the back of the car.

When we got home, Rob tipped the contents of both boxes into an empty top bar hive and put the lid on. We would not know until we returned to the hall the next day to retrieve stragglers whether the rescue had been successful or not. Happily, when he did go back up the ladder and into the roof space, Rob could see no sign of anything that even slightly resembled a cluster; there were less than a handful of confused, disorientated bees up there. What relief. It looked as though he had managed to collect the queen and pretty much the entire colony of workers, together with most of their comb, in the nick of time. The worst of the stormy weather that had been forecast arrived that afternoon.

Three years on, we call this colony, which survived against the odds, our Village Hall Bees. They have adapted well to their new home, thrown off at least two swarms of their own, and hold a special place in our hearts.

Brigit Strawbridge Howard is a bee advocate, wildlife gardener and naturalist. She writes, speaks, and campaigns to raise awareness of the importance of native wild bees and other pollinating insects. She lives in North Dorset, UK with her husband, Rob.

Popular
7 Smokable Plants You Can Grow That Aren’t MarijuanaBrian Barth
How to (Actually) Get Rid of Fruit FliesEmily Baron Cadloff
Yes, the Government Really Does Stash Billions of Pounds of Cheese in...Emily Baron Cadloff
What to Do With an Abundance of PeppersShelby Vittek
6 Differences Between Llamas and AlpacasAndrew Amelinckx
Explore Modern Farmer
Related
Food & Drink
‘Tis the Season For GleaningCrystal Sands
Plants
This Seed Detective Travels the World Tracking Down Lost CropsEmily Baron Cadloff
Books, Cookbooks
In Her New Book, Molly Yeh Goes Back to BasicsEmily Baron Cadloff
Food & Drink, Plants
In Awe of the PawpawDanny Childs
wpDiscuz
We use cookies on our website to give you the most relevant experience by remembering your preferences and repeat visits. By clicking “Accept”, you consent to the use of ALL the cookies.
Cookie settings ACCEPT
Privacy & Cookies Policy