No Lambs to the Slaughter?

One vegan activist’s crusade to get sheep off the menu at an Ohio college. 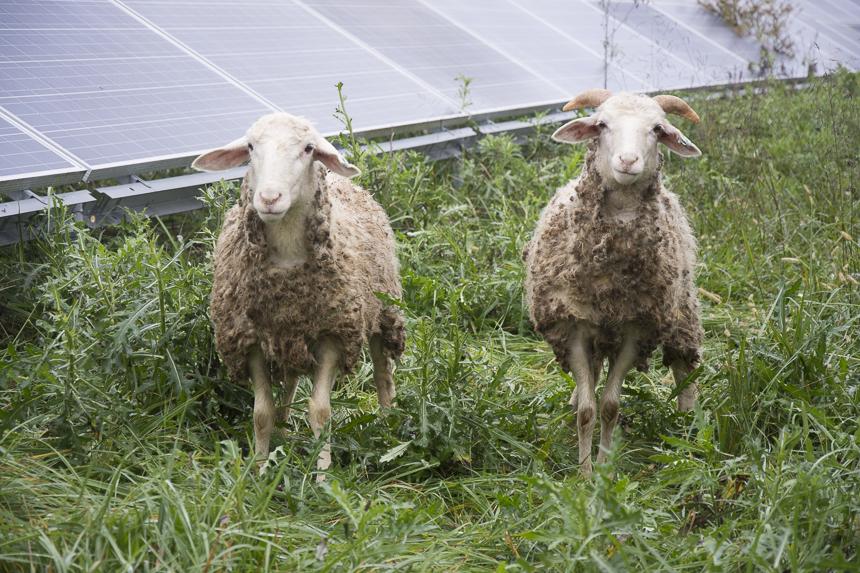 An Ohio professor has been waging a campaign to try to force a college to abandon its on-campus sheep farm on the basis of animal welfare.

When Dr. David Nibert encountered nine lambs on Antioch College’s campus just steps away from his home in May, he wondered what the school was planning to do with them. The sociologist teaches an Animals and Society course at Wittenberg University.

At first glance, Nibert, who is a vegan, says he believed the lambs were taken from their mothers far too soon. “They were all pretty shell-shocked and all huddled together, wondering what was going to happen to them next,” he says.

He conducted a quick Google search that revealed the lambs would be slaughtered and served to the college’s students as part of its farm-to-table program.

The college has defended its on-campus sheep farming as sustainable, responsible and humane agriculture. The farm was launched in 2011 and provides campus kitchens with just under half of their food.

The program added sheep in 2014 and slaughters nine every November. The students and professionals who work on the farm take pride in how they raise their lambs, letting them graze openly.

Since his initial encounter with the lambs, Nibert has been pushing for Antioch College to release the lambs to a sanctuary, posting flyers and writing letters in local newspapers. 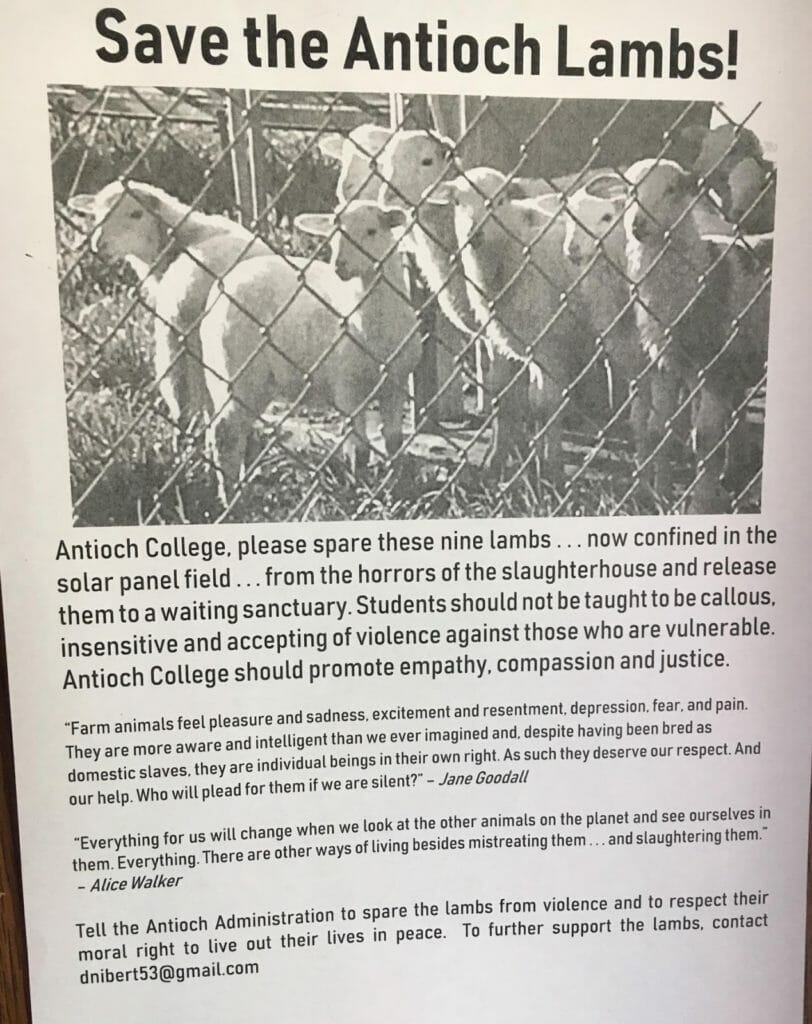 A flyer David Nibert has distributed as part of his advocacy efforts.

The professor says he’s concerned about the environmental impact of the farm and hopes the program will switch to an entirely plant-based model.

Kat Christen, the school’s farm manager, says the choice to include animals on the farm mimics an ecological system in the truest sense. The farm is open for students to work on so they can learn about sustainable agriculture. Faculty also use it as an educational tool in various courses.

She says the students’ interactions with the sheep give them a real connection to their food, adding that 80 percent of last year’s students were meat eaters. The program also provides plant-based and vegan options, but for those on campus who are eating meat, Christen says the school’s farm is the best place to give them that product.

“If they’re not eating the lambs from the farm, they would be getting the meat from somewhere else and I think that’s a point that’s sometimes lost,” she says.

In an email statement, the college says it will not be nixing its sheep farm and that any changes made to its sustainability model would need to be suggested by someone who is part of the campus community.

“This has mostly been a nuisance for staff who have had to field incoming communications and related requests, and unfortunately even a death threat along with other harassment we’ve needed to take seriously,” it adds.

Nibert, however, says he believes the college will eventually listen to him. He taught at Antioch in the 90’s and says it had a reputation for being social justice leader that he hopes will prevail.

I raise sheep , I sell lambs for consumption. Domesticated animals that we eat stand no chance of being extinct. They are covered valued and bred up. The industry creates medicines and products that man has been using for 2000 years . Almost all of lambs that are raised for consumption are culls. Animals that are not breed type, breed standard, parasite resistant etc. If you want to be compassionate that’s great but just because you are a vegan dosent mean everyone else has to be also. Raising them humanely is helpful in sequestering carbon in the soil. Sheep eat… Read more »

I guess vegetables are just not « cute » enough — nobody thinks twice about eating them. How do you go about defending biodiversity if you can’t earn a living from anything and everything that is living!

I raise meat goats and milk, meat and laying chickens, rabbits, and steers and all of them are on pasture except the rabbits with the goats and steers in a rotational grazing system. The rabbits get free choice pellets, hay and cut fresh greens when they are available. My animals get to live as naturally as possible. Chickens out there scratching around and catching bugs. Goats browsing and steers grazing. We have an amazing amount of wildlife on our small 27 acre farm because we don’t use herbicides or pesticides. My goats keep the pastures weeds under control and we… Read more »

Feed the professor some grass

Animals are not food–they are sentient individuals just like you and I. For that matter, there is nothing at all “sustainable” about animal agriculture. Very unfortunate Antioch chooses to be on the wrong side of history.

It is actually quite a simple question. Is it OK to kill an animal because you like the way it tastes ? It seems obvious to me, but not to most people, that the answer is ‘no’. I realize, however, that there are probably at least 60,000,000 in this country alone who prefer to follow Donald Trump ( non vegan ) instead of Great Thunberg ( Vegan ). Do your best.