A Conversation with Rachael Garrett: Is the Solution to Deforestation in the Amazon Better Agriculture? - Modern Farmer
Environment

A Conversation with Rachael Garrett: Is the Solution to Deforestation in the Amazon Better Agriculture?

Farmers are often pointed to as the culprits behind the recent fires in Brazil. This researcher thinks agriculture—of a different sort—could solve the problem. 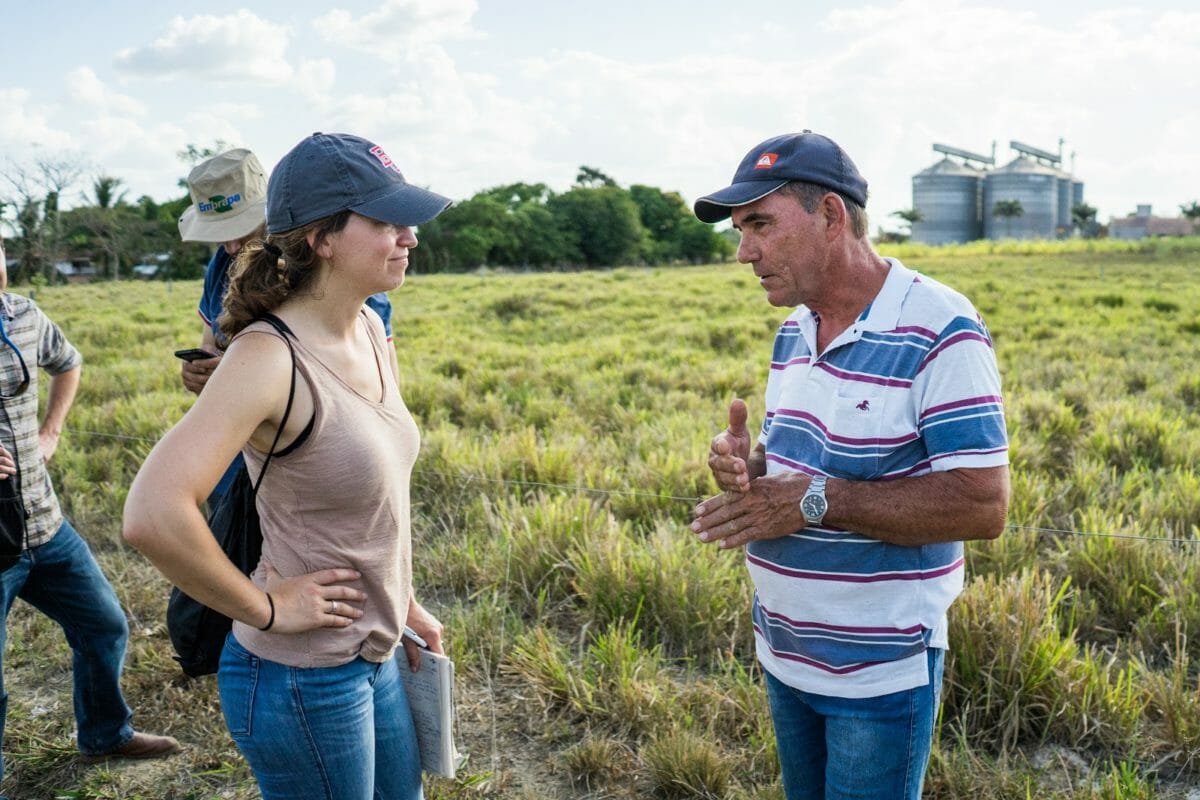 Rachael Garrett says poor farmers in the Amazon need a way to transition out of cattle production and in to producing fruits and vegetables.
Photography Gabriel Sap/BU Photography
Share
Tweet
Pin
Email

Brazilian President Jair Bolsonaro has drawn the ire of environmentalists for relaxing environmental regulations that had until recently slowed the pace of deforestation in the Amazon. He vowed to open up the region to further development by agribusiness interests, which stand to profit, of course; the ordinary farmer scraping out a living on meager Amazonian soils, probably not so much.

What is rarely featured in news stories about the horror and destruction in Brazil of late is a concept that Rachael Garrett, a professor of environmental policy at ETH Zurich, holds up as the most practical solution: helping farmers become more profitable so they stop clearing additional land in an effort to survive. This expert on Amazonian agriculture says that farming methods—which in the Amazon revolve around cattle and soybean production—are so rudimentary that soils become quickly depleted, leading to abysmally low yields and a vicious “slash-and-burn” cycle in which it is easier to clear adjacent forest than to improve the plots that have already been converted to fields and pasture.

Rather than tell farmers what they shouldn’t do and throw money at biodiversity conservation projects, she suggests investing in the education and infrastructure that poor, rural communities in the Amazon need to make a decent living on small, well-managed farms. She recently spoke with Modern Farmer about what that might look like.

*This interview has been edited and condensed for clarity.

Modern Farmer: In your view, what is the fundamental issue encouraging the continued destruction of the Amazon rainforest?

Rachael Garrett: I focus on identifying technologies that farmers can use to increase their productivity and profitability, because I’m deeply compassionate to the fact that you can’t just tell somebody what not to do. These people were told to move to the Amazon in the seventies and eighties to clear the land. That was part of government policy. And then the politics changed and they became criminals.

MF: You’re referring to the government-sponsored mass migration aimed at “settling”—one might say colonizing—the interior of the country. At this point, many of those folks have been there for decades; they are there to stay. How do you entice them to change their ways?

RG: You have to go and talk to farmers to get an understanding of what their challenges are. The majority of the land is being operated with very basic technology, so the amount of food that people are producing and the value of that food is very low relative to what it could be. [That] means there’s a huge opportunity for improvement. Part of my focus is to help companies figure out how to exclude products associated with deforestation as a signal to farmers that they shouldn’t be clearing their land. But that can’t be divorced from building capacity among farmers for them to do something else with their property, to add value in the existing areas instead of seeking to add value by clearing new areas. And that’s a policy issue.

MF: Most environmental organizations are focused on conservation, and they see farmers as perhaps a pesky hindrance to achieving those goals. Are they misguided?

RG: The majority of the people who work in this sphere are ecologists, so they’re primarily focused on deforestation, on fires, et cetera. Of course, I care about those things, too. But I really don’t see how we can solve the problem by simply telling people what they can’t do if we don’t also provide some incentives to help them change their practices.

MF: What practices are available that could realistically help farmers to increase their earnings while farming less land?

RG: Poor farmers need a way to transition out of cattle production and in to producing fruits and vegetables, which are of higher value. To do that you need government intervention and investment. You need better roads so people can get their products to market in a reasonably low-cost way. You also need refrigeration and processing facilities to turn the crops into something less perishable. America is crazy about acai — they produce a lot of it in the Amazon, but most of it never makes it out of there.

MF: So if the government stepped in and provided those things, you think farmers would make the leap?

RG: It would be completely irrational from a purely economic perspective for a farmer to invest in a higher value, fire-free system, like producing fruit, as long as their neighbors continue to use fire to manage their property. These fires often escape, so it’s too much risk to invest in changing your system. What’s needed is a big push where you try to change the behavior of everybody at the same time. It’s never been done before on a large scale in the Amazon, but I think it’s totally possible. We’ve seen how many people are floating money around lately, like Leonardo DiCaprio saying he’s going to spend $5 million on fighting forest fires. If that $5 million went towards transitioning communities towards improved practices, it would create long-term, meaningful change.

MF: Have you seen small-scale examples of these ideas being put into practice successfully?

RG: There are examples where you have indigenous communities who produce something quite well like brazil nuts or acai, and the government has worked with them to improve the system and develop markets and infrastructure for it. There’s one super-interesting project where people tap native rubber trees — the government set up a facility to make condoms with it.

RG: The local people get a really good price for their rubber. And the government saw it as an opportunity to address a public health issue by making condoms more widely available in the area.

Excellent observations. We are having many of the same discussions about how the small producer in Brazil that produce over 80% of the food produce in the country can feasibly move towards economically viable regenerative farming. Green Man Farm, Brazil

Why should anyone be asked? to “have a small farm to make a decent living” when a whole lot of north and south america (canada and USA especially) have huge ranches or farms and make a Very Good living. A lot of these very profitable farm are on land that was burn cleared of forests! Let’s pose this scenario to a southern Ontario farmer; let your land grow back into forest(because they are burning the Amazon) and you can make a ‘decent living on a few acres selling windfalls for firewood, perhaps).

I want to make it clear that I advocated for coupling strong conservation policy and investment with investment in improved farm practices – not just the latter. Investing in intensification alone is very dangerous and could result in additional deforestation.