The Dirt on Dirt Capital

It’s a for-profit company that seems willing to take on more risks than other lending institutions. 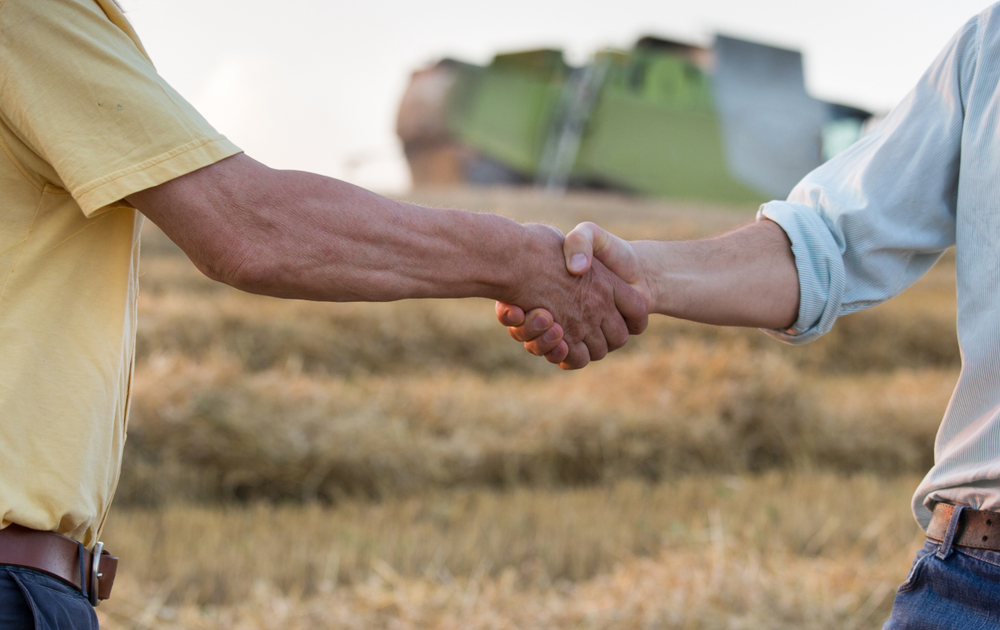 Is the young, modern farmer withering away? A cursory glance at farm numbers alone paints a fairly rosy picture of America’s farming landscape. According to a newly released 2017 Census of Agriculture from the United States Department of Agriculture (USDA), the number of farmers under the age of 35 in the U.S. has increased to more than 321,000, up from 208,000 in 2012.

Furthermore, longtime observers of the ag scene always ask one question: In addition to concern over the age of the producer behind the tractor, shouldn’t we be looking at what kind of American farm is thriving?

According to the census, we lost 70,000 midsize farms between 2012 and 2017. Meanwhile, the number of larger farms (comprising 2,000 acres or more) has increased. And the farming version of the one percent class just keeps getting richer: The top four percent of large farms that make over $1 million a year in sales accounted for more than 65 percent of all farm sales in 2017.

In a nutshell, farms are continuing to get bigger, more corporate and older. Yet, there are a few institutions that are successfully managing to go against the big ag grain. Their entire business models are based around lifting up financially disenfranchised farming entrepreneurs who are focused on responsible land management and sustainability initiatives.

This is a case study of one such organization, Dirt Capital Partners, and the farmers it funds.

FUNDING PROGRESS
“Young farmers need options, but classic lending institutions won’t invest in people unless they have great credit, collateral and off-farm income,” says Lee Hennessy, the 38-year-old founder of Moxie Ridge Farm & Creamery who purchased the 46-acre farm in Argyle, New York, from a retiring farm couple. “When I spoke with Dirt Capital, I decided that they were my best chance at making this farmstead goat creamery a reality.”

In other words, no one will lend you money to buy chickens if you don’t have a nest egg. Dirt Capital Partners is one of a small but growing group of for-profit investors who are willing to let farmers count their chickens before they hatch and invest in a savvy farmer’s potential. As of press time, Dirt Capital has invested about $15 million in 22 projects spanning 3,800 acres, all in the Northeastern United States.

“We try to fill gaps in the conventional agricultural credit and lending system,” says Jacob Israelow, founder and managing director of Dirt Capital. Unlike traditional lenders, who care less about a farmer’s choice of pesticide and more about the size of their collateral, they will only work with farmers who are committed to sustainable ecological land management (they don’t have to be certified organic, but they have to be practicing organic methods). They also need a marketable game plan with high-value foods that consumers are willing to pay for.

“We’re focused on supporting farm businesses that are economically viable and ecologically beneficial,” says Israelow, describing the farmers in Dirt Capital’s portfolio. “In our region, these are primarily organic dairy and diversified direct-market farms.”

Take the Dharma Lea dairy farm in Cobleskill, New York, for example. With the help of Dirt Capital, it acquired a 425-acre property from a retiring dairy farmer to expand its 100 percent grass-fed, organic dairy business. Paul and Phyllis Van Amburgh own and manage the farm with their five children. They use holistic grazing and whole farm planning that takes into consideration the health of the entire herd, as well as the diverse ecosystem of soils, grasses, flowers, plants, insects, birds and small mammals that the thriving organic farm hosts within its bounds.

“I met Jacob for the first time at a regenerative farming conference, and we hit it off right away,” says 56-year-old Paul Van Amburgh. “I told him that Phyllis and I wanted to quit our jobs and farm full-time by buying additional land. We had an ambitious plan of leveraging our 50-cow operation and creating a full-scale regenerative farm. But we couldn’t get a bank or Farm Service Agency to sign on because they have strict financial caps, and it would cost over a million dollars.”

With its strong track record, management skills and business model, Dirt Capital led a joint financing arrangement with the USDA Farm Service Agency (FSA) to provide the bulk of the loan needed to buy the farm and construct new buildings while still enabling the Van Amburghs to take advantage of the FSA’s flexible terms and lower interest rate (up to the maximum loan limits allowed).

“I loved Jacob’s approach to financing,” says 48-year-old Phyllis Van Amburgh. “He didn’t just look at our business numbers; he also took into account the human factor, what we had accomplished so far, our business plan for the future and what he came to see as a viable path to success.”

Israelow founded Dirt Capital in 2013. He graduated with an MBA from Columbia Business School and went on to serve as vice-president at Goldman Sachs in Asia for five years. Instead of doing what most people in that position would do (continue climbing the ladder until he had enough money to retire and swivel to philanthropy), he returned to his roots.

He grew up in a suburb of New York City as the grandson of first-generation immigrants who started food businesses. He was raised with an appreciation for good food and good food culture. And that, Israelow believes, begins on well-managed farms that are as invested in their communities as they are in making money.

After a brief but highly successful career in finance, he and his wife decided to leave the hustle behind and embrace a different lifestyle. He saw that a new generation of farmers in the region were growing healthy food in ways that regenerate soil health and rural economies and that some could make a living at it but often lacked long-term secure access to land. He also realized that he had a unique opportunity to use his business and real estate background to empower a new generation of smart, motivated farmers who were disenfranchised by a system created to help subsidize and fund already large, successful farming operations.

Israelow moved to New York’s Hudson Valley with his wife and three kids, and his initial partnerships were with farmers in his neck of the woods. “I used my background in business to channel private investments in support of farmland access, conservation and long-term land security for sustainable farmers who were unable to secure the financing they needed to take their businesses to the next level,” he says. He recruited like-minded private, individual investors who were also passionate about maintaining America’s traditional small-farm, community-centric model of agriculture.

After a few years of running the show solo and slowly expanding his footprint to encompass more of New England and New Jersey, Israelow brought in Benneth Phelps as director of farmer services. She helps assess potential partnerships with businesses and works one-on-one with farmers in consultations before, during and after major investments, purchases or farm rehab.

FARMING LIKE AN ENTREPRENEUR
About 25 individuals help provide funding for Dirt Capital, which, unlike many alternative, agriculturally focused lending organizations, is set up as a for-profit venture. This notion is embraced by 36-year-old Brandon Bless and 45-year-old Corie Pierce of Vermont’s Bread & Butter Farm, which recently partnered with Dirt Capital on a large and complicated farmland conservation investment project. “We knew it would be a challenge to come up with $3 million to buy a retiring farm family’s land when developers had cash in hand to offer the Auclair family,” says Pierce. But, because the Auclair family, whose family had been farming the land in South Burlington, Vermont, for multiple generations, wanted to pass along the open space, waterways, farmland and pastures—with public trails and access—to other farmers who would honor their legacy, they gave them a little time.

“Because Dirt Capital is a for-profit company, they are willing to take more risks than other lending institutions if Jacob and Benneth believe the farmers’ business plan merits that risk,” says Bless. “The FSA wouldn’t even look at our proposal because it was so complex, but once Jacob and Benneth created a plan that would involve a mosaic of institutions working together and providing loans, they began to see the potential.”

“We will carry a mortgage on this farm for 21 years, but we didn’t get into farming to make money,” says Pierce. “We are passionate about building community through food and music and engaging people of all ages and backgrounds on the farm and the land, which we all share.”

Instead of focusing on foodies who want their own show on the Food Network or hope to land a line of organic toaster pastries in Target, Israelow sought out soil geeks who want to provide people in their own community with delicious, responsibly grown food. “A growing segment of consumers is willing to pay a premium for responsibly produced food, but it shouldn’t have to be this way,” says Israelow. “Everyone should have access to healthy, fresh food. We need policy makers to direct incentives and subsidies to farmers who are doing this hard work. People understand that better-grown food is healthier for them and their families. Our whole goal is to give smart, responsible farmers a path to success.”

Israelow is certainly right about interest in organic food being on an upswing. The Organic Trade Association found that 82.3 percent of Americans have organic food in their fridges and pantries, up 3.4 percent from the previous year’s study. Organic food sales now total nearly $40 billion a year, making up about five percent of our total food sales. Now much of that probably lines the pockets of subsidized mega-farm organic producers without any of the “true” commitments to what most consumers would consider to be sustainable farming practices. But thanks to Dirt Capital, there are 22 more truly sustainable, modern farmers out there, growing healthy and delicious food for you and the planet.

Enjoyed the article and glad to read of ventures such as this one.

Great! I’m looking for more funds in this space
DM me.