This Finger Lime Farm Is Nothing to Shake a Finger At

Shanley Farms in Morro Bay, California, is a father-daughter team. 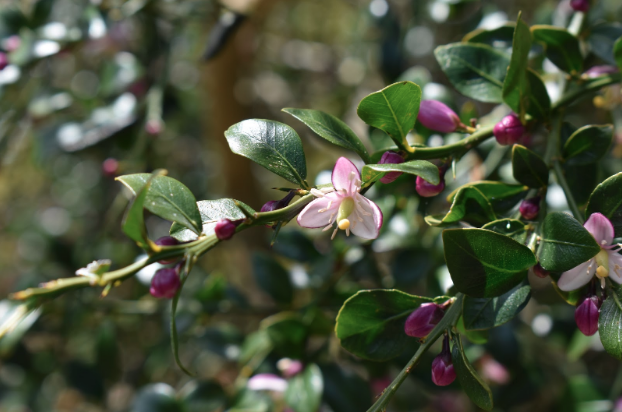 Have you ever seen a flowering finger lime tree before? You have now.
Photography Trevor Hagstrom and Maggie Rosenberg
Share
Tweet
Pin
Email

Jim Shanley is tirelessly curious, especially when it comes to food. His philosophy on farming is to consider flavor experiences and how produce will be used at the table before planting trees. His farmhouse overlooks Morro Bay, which is known for its Hass avocados. This is the northern limit of where California’s favorite fruit can grow, and the longer avocados hang in cooler air, the more their flavor develops. Shanley selects and sells perfect single-serving avocados that he calls “gator eggs.” He says the four-ounce fruit is just the right size for a meal. His love of flavor led him to diversify, from growing avocados like his neighbors to becoming the first cultivator of Australian finger limes in the northern hemisphere.

Shanley is a fruit investigator. From rare tropical fruits to new apple hybrids, he has a mental record of what is growing all over the world. He knows what is exciting and what tastes best. In his previous career as a commodities trader, he was on a business trip in Malaysia and demanded that the driver let him out on a wild jungle road to taste his favorite fruit, mangosteen. He recalls that they had 12 different varieties of the fruit to taste. He speaks about the incident the way vacationers talk about visiting the Taj Mahal. Although he seems willing to try growing any tree at least once and his farm successfully cultivates dragon fruit and passion fruit, he is confident that mangosteen would never work on his California farms. He is still testing the boundaries of what will work, though. His recently fruiting coffee trees are the northernmost plantings in the world.

Shanley found finger limes when they were first shown to farmers at Lindcove Research and Extension Center, a pilot nursery for the University of California’s agriculture programs. Shanley saw the fruit and was floored to discover something he hadn’t seen before in his hunt for tropical fruits. Soon, he would become one of the world’s most reliable suppliers of finger limes.

Cultivating the fruit is a labor of love for fruit-loving Shanley. He points out how every lime that sprouts dangles above a sharp spike. He laments that selling finger limes isn’t easy — the problem is that no one knows what they are. If you pass a carton of finger limes at the supermarket, all you see are dark green crescents that look like dried-out chili peppers and cost significantly more than other citrus. People who don’t view exotic fruits with wonder don’t get it, but those who stop to discover the pearls inside the fruit are treated to a revelation. The comparison to caviar is obvious, but the fruit’s vesicles are less delicate than fish eggs and hold their shape until they’re deliberately crunched on. Finger limes have a more herbaceous flavor than conventional limes, especially if some of the aromatic oils from the zest get on your hands when you squeeze out the pearls. 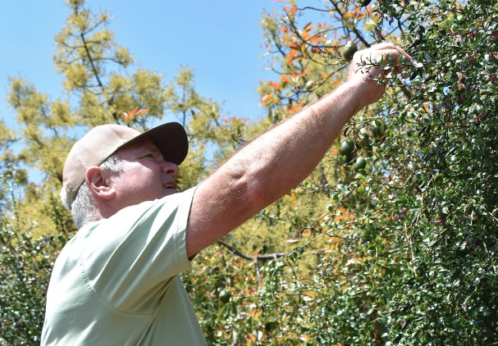 Jim Shanley with his finger lime trees, a rare fruit flourishing in California. Photo by Trevor Hagstrom and Maggie Rosenberg

Shanley Farms has 8,000 finger lime trees between his Morro Bay farm and his organic San Joaquin Valley ranch. They yield enough fruit to send limes all over the world, to chefs and home cooks that share Shanley’s sense of wonder for the unusual fruit. He explains that Europeans like finger limes in their holiday cornucopias. The Japanese eat them plain — their tradition for proper sushi preparation is too strict to allow citrus pearls, even if they would make great garnishes. Even in Australia, finger limes remain obscure. They are considered “bushfood,” or a native plant eaten by aboriginal people. Urban Australians are unlikely to have ever tasted finger limes.

Shanley isn’t done experimenting with finger limes and hasn’t stopped finding novel culinary uses for them. He is currently exploring colorful new varieties to plant, such as D’Emerald, and hopes that fruit caviar will come in as many colors as fish caviar. One of Shanley’s favorite things to do with finger limes is to add them to coleslaw. He explains it like a chef, reminding us that coleslaw needs acidity but lemon juice gets lost in the dressing. He asks us to imagine biting on crisp cabbage and releasing a small burst of fresh lime juice as we chew. We imagine it — and our mouths water.

Where can I find Finger Limes… we live on the So. Oregon Coast

Loved this article. I moved to the Bay Area a year back and heard about these from Golden Nursery owner in San Mateo and I was hooked. Have one of these growing in a container and was thrilled to have two branches with tiny fruit emerged this Summer. Need to read more to keep them flowering and fruiting. Maybe I’ll put them in the ground now that I have a little more permanent place.

Would love to visit your farm.

I introduced ginger limes to my sons and they love it. They asked for them and I would love to buy them for special treat on special occasions but we lived in Kansas and they are unheard of!!! They are sooooo expensive….. do you ever have a sale???? Can I get a discount if I buy in bulk????