Meet the Man Who Wants to Convince Every Kid in America to Take Up Farming - Modern Farmer
Animals, Lifestyle

Brady Lowe has outgrown Cochon555. His latest project is a biggy.

Brady Lowe’s mind is swimming with ideas. There’s the Piggy Bank Farm in Missouri, where he will give away 600 heritage pigs to first-time farmers and those who want to expand their already existing gene pool. Then there’s this summer’s Mags for Ag symposium, where chefs and sustainability experts will gather to drink magnums of wine and brainstorm solutions to the problems that are driving farms out of business. Through the deluge of passion projects, which he speaks about with sprightly vigor, one detail stands out: He has a plan to convince American kids to take up farming.

The founder of Cochon555, a summer-long series of conferences and cooking competitions for heritage pig farmers, is building a new project called GrowA’Farmer. Though it’s still in the start-up stage, GrowA’Farmer will soon look like this: For $300, families will be able to purchase a large pallet for their kids that contains everything they need to build a customizable 4×4 garden plot: topsoil, seeds and shovels.

The idea sprouted from Lowe’s observations that the family farm seems to be in decline and there are few resources (activities, camps, classes) targeted at young kids to get them interested in and excite­­d about farming. With a note of near-desperate sadness in his voice, Lowe reminds me that 90 percent of farmers are aged 62 and older. He worries that, as demand grows for farm-to-table food, the number of actual farmers will decrease. Where will that food come from if there’s no one to farm it? It’s clear, the situation is dire, but Lowe is convinced that today’s seven- to 11-year-olds are the future of farming — if only they had the right tools to pique their interest.

It won’t be enough to wait around for environmentally conscious parents to buy the GrowA’Farmer pallet for their kids, though. He hopes corporate sponsors like the Super Bowl, Masters, Home Depot and Final Four will eventually sign on to donate even a sliver of proceeds from ticket sales to GrowA’Farmer. The cash infusion will help him deliver hundreds of thousands of boxes to kids in underprivileged communities, food deserts, agricultural centers and even entire school districts. 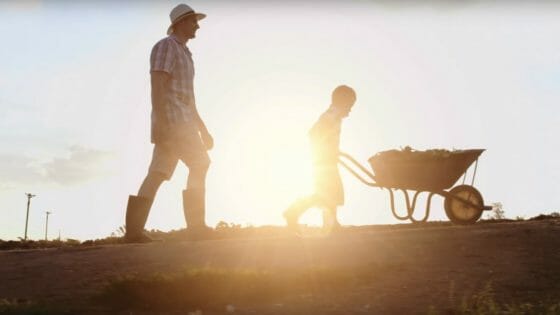 “Athletes, celebrities and corporations might pledge $25,000 to places where they grew up — maybe their old elementary schools — to create an after-school program where they can grow food or teach gardening,” explains Lowe. “Or a school could have a donor and [the pallets] could be distributed to every student.”

If GrowA’Farmer eventually teaches even a few kids the pleasures of growing their own food, Lowe will consider it to be a success. The laundry list of events and organizations that he has dreamed up to help sustain and modernize farming have one thing in common: Each one strives to benefit real people in their everyday lives, from curious kids to farmers in search of community to those who aspire to run a farm but don’t know where to start. Some of his goals may sound lofty, but if anyone is equipped to help plan the future of farming, it’s Lowe.

You have to first understand the difference between a garden and a real farm. Grow a pallet seems like a money-making scheme for Mr. Lowe. I wonder how many people will grow enough prduce on the pallet to make a profit, or how many years (with sufficient inputs of new seeds, etc.) it will take to offset the initial investment. Not to mention how soon most people will lose interest in this. From a farmer’s point of view, Modern Farmer should be renamed Modern Gardener. The articles have little to do with real farming on a profit-driven scale. Most of… Read more »

Hi my name is Denise and I am preparing to farm a nice size parcel of land in my community. It is to late to planet now but we ( my brother and a few friends) will be preparing the land for early spring planting. I am in dire need of help. If I can send you a picture of the land perhaps you can tell me the best way to get started. The land is overgrown with weeds etc. thank you kindly.
Denise

The big piece missing from this article is any acknowledgement of the movement of people already teaching young kids about gardening, particularly in urban areas. In San Francisco, CA alone there are 60+ public elementary schools that have a garden where students age 5-10 are being taught gardening and environmental science by a garden teacher whose sole job is to do just that. The more the merrier, but Grow A’Farmer certainly isn’t the first program to introduce young kids to growing food.

he should do month-long farming camps as growing a small garden is not an into farming. I raised many a small garden in my youth but what drew me to farming was the decades I spent on horse farms riding, training, grooming, and teaching all kinds of equine disciplines as well as cleaning stalls, haying, and many other farming tasks

What are the inputs for your vertical farming in a 40 foot container? How many lights, how much electricity will you use, and what will you grow? Certainly not any grains…probably lettuce, which will not feed the world or give you much of a profit, if any. Or pot which-while it might make the world feel better and would certainly turn a profit-will also not feed the world. Maybe I’m the jackass you’re referring to, maybe not. I don’t care. But I am a real farmer who has much more insight into the real world of “modern farming” than most… Read more »

I am all for encouraging gardening, but I would like to see a list of items included on the “starter pallet “.
Does the $300 include cost to ship and sales tax?
Jim

That is a great idea,how could that possibly not be a great benefit to everyone involved, even people that think it’s not a benefit to themselves it can be socially beneficial to people

What a great idea. I live and work at a children’s home here in South Texas and something like this is just what we need to have at every one of our cottages to help the kids to really appreciate how and where our food comes from.