Yarger is fine with handling maggots. “They don’t smell,” she says. “They have a leathery appearance, and they’re not slimy or squishy. The flies themselves are quite pretty. They look more like wasps. For me, this is just another kind of farming.”

Yarger, who has raised AU$1.4 million in funding, has been branded “a force of nature” for her pioneering ways by The Australian. She came to larvae via sheep farming and various stints, including as a family readiness adviser for the United States Marine Corps Forces Special Operations Command and as a TEDxCanberra partnership manager. Goterra debuted in 2014 after a pivot. “I wanted to go back to conventional farming,” she says. “But the barrier to purchasing and setting up a traditional, viable agricultural enterprise was outside of my financial capabilities.” Instead, she explored alternative, sustainable business models. Generally, she says, small enterprises force someone to work off and on the farm, meaning that you just work to work rather than run a viable concern. 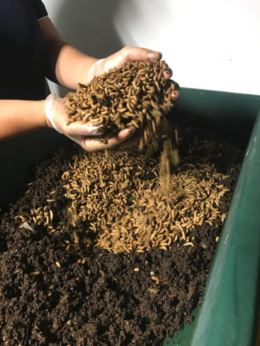 At first, Yarger, who has a bachelor’s degree in sustainable development from Murdoch University in Perth, was drawn to the trendy bug-protein market. As her involvement with insects grew and her business model evolved, she realized that her future lay in waste management, especially the kind that is hard to process and rarely collected, like tea bags, coffee, and packed-lunch scraps.

She advanced from managing a bucket of food from several offices to handling waste from more than 400 homes and businesses, the local hospital and several state and federal government offices. Now, her 3,014-square-foot factory processes two tonnes of waste weekly. “It’s just like any other livestock farming operation, with some key differences,” she says. “Because they’re insects, those things don’t happen over the course of a year; they happen over the course of 30 days.” She adds that she has a modular system instead of paddocks.

Her enterprise has humble roots. “I started with nothing,” she says. “I started in my backyard, and we probably spent $6,000 that first year just trying to kick things off.”

She adds that she bought her kit secondhand. In contrast, buying a viable conventional farm would have cost about AU$1.5 million. “It was easy, along with the capital expenditure required for livestock and machinery,” she says. 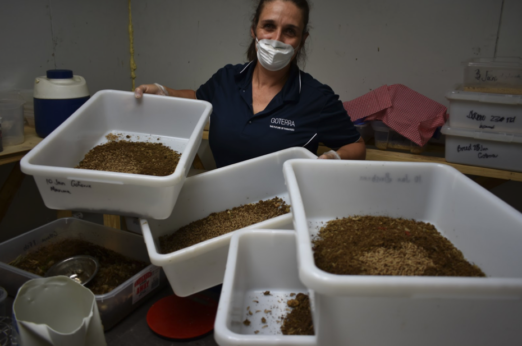 While her capital expenditure has certainly been less than that of a conventional arable enterprise, the work is similar and free of squeamishness, she says, whether the consumers are pigs or people. “We put bloodied pieces of flesh in our mouth,” she says. “We suck marrow out of bones. If we can do those things, I’m not sure that we should be getting precious about eating insects.”

The idea that insects make bad food stems from cultural association, she argues. “You spend more time worrying about whether or not your flies will live than being grossed out that they’re flies,” she says.

Popular
Is Agroforestry the Key to Hardier Row Crops?Shea Swenson
7 Smokable Plants You Can Grow That Aren’t MarijuanaBrian Barth
Why Don’t We Eat Turkey Eggs?Dan Nosowitz
Goat Sex: Everything You Wanted to Know But Were Afraid to AskAndrew Amelinckx
Where Has All the Mustard Gone?Chloe Faure
Explore Modern Farmer
Related
MTMF
How Reviving Age-Old Pokkali Farming Practices Is Helping South India’s FarmersSneha Thomas
MTMF
This Farmer is Making Some of the Most Coveted Wines in AmericaJulia Clancy
MTMF
This Self-Taught Farmer Wants to Spread Regenerative Agriculture Across IndustriesTheresa Bennett
MTMF
This Sydney Restaurateur Couldn’t Find the Thai Ingredients She Needed, So She...Aarti Betigeri
wpDiscuz
We use cookies on our website to give you the most relevant experience by remembering your preferences and repeat visits. By clicking “Accept”, you consent to the use of ALL the cookies.
Cookie settings ACCEPT
Privacy & Cookies Policy