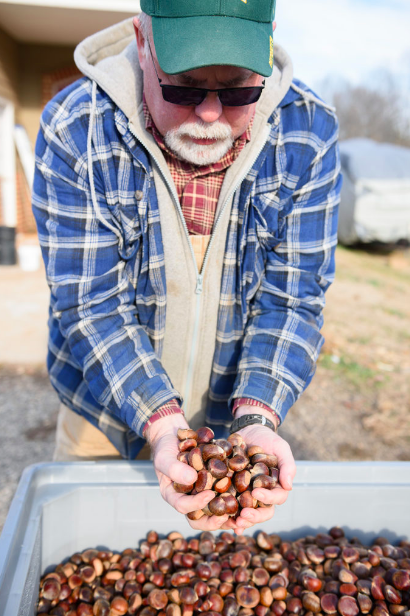 Some people have a 401k, but David and Kim Bryant have a chestnut orchard in Nelson County, Virginia. “We didn’t start farming as a hobby,” says David. “We wanted a business that would support us through our golden years.” The couple bought their 46-acre spread in central Virginia’s Blue Ridge Mountains in 2003, after decades of working in office jobs, and eventually landed on the idea of growing chestnuts. “Ninety percent of chestnuts are imported to the U.S., but they’re actually a very natural tree for the Appalachian region,” says David. “Plus, we figured we could make a real go of it on our relatively small plot.”

They’re reviving an age-old crop in the region, which was heavy with chestnut orchards in the early 20th-century, but wiped out by blight in the 1940s. The couple found a blight-resistant hybrid breed to plant, then sought out farming advice from the handful of growers in the U.S. “This is such a specialty crop, you can only get quality information person-to-person, not from the web,” he says.

Since planting 1,600 trees seven years ago, the couple has steadily built a wholesale clientele, with customers seeking “a taste of history,” says David. This season, the Bryants expect to harvest and sell around 14,000 pounds of chestnuts – almost double last year’s haul.

It’s enough to make them feel comfortable counting on their retirement plan, says David: “Those trees will keep going for another 50 years.”

We are very interested in starting some saplings on our 10 c farm in the Scottsville area.
Do Bryant’s sell saplings?