Meet Kippee, A Foster Hen Living in a Brooklyn Apartment with 700+ Plants

When a local bird sanctuary needed a home for an abandoned Rhode Island Red, Summer Rayne Oakes stepped in. 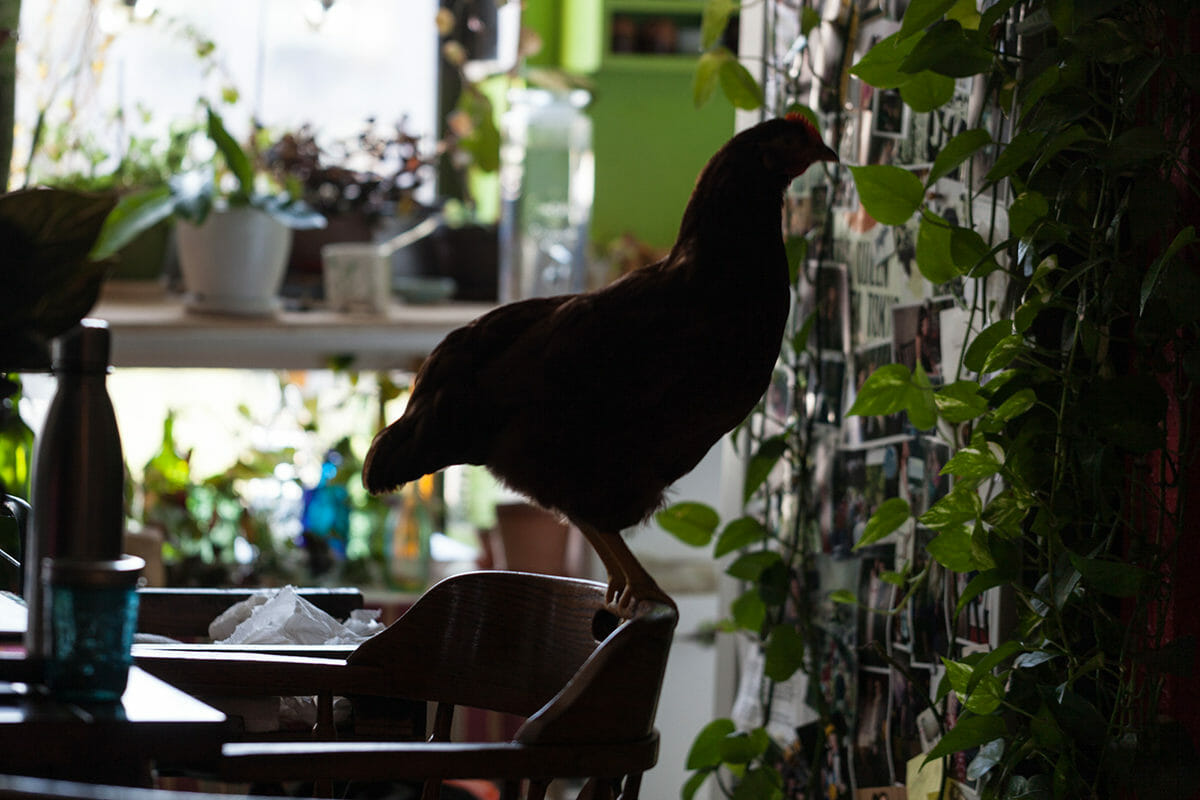 Summer Rayne Oakes may be familiar to Modern Farmer readers as the woman who keeps 500 plants in her Brooklyn, NY apartment (Update: Plant count has since increased to more than 700). Well, now she’s become known for something new: the chick with the chicken.

It all started when Oakes, who runs the popular blog Homestead Brooklyn, found a wounded ovenbird in her local community garden last May. Not just a plant lover but an animal lover, too, Oakes brought the creature to the Wild Bird Fund – the only bird rehabilitation center in New York City – for treatment, and that’s where she met a small, friendly hen.

“I’m sitting there in the waiting room like a mother with a sick child, waiting to get a prognosis on the ovenbird, and this very personable, kind of scraggly, ragamuffin hen jumped onto my lap,” explains Oakes. “That was Kippee.”

Based on the animal’s age and the time of year, the sanctuary’s staff guessed that the Rhode Island Red was likely an Easter gift that was released into the wild once the novelty of a baby chick wore off. But the Wild Bird Fund being a home for, well, wild birds wasn’t really the right place for a chicken.

Yes, Kippee does eat some of the plants. She completely mowed down my pothos. I had to trim it way back.

Oakes didn’t take home Kippee that first visit – she was still touring for her recent book, SUGARDETOXME – but the chick stayed on her mind. A month later the hen moved into Oakes’ Williamsburg loft.

Kippee, who Oakes says is “more of a people’s hen than a hen’s hen,” quickly imprinted on her new owner. The pair are regulars at their local community garden, and they’re frequently spotted together around town. “It’s amazing walking around with her because everyone’s floored,” says the author, who grew up with 12 chickens and a rooster named Wallace at her home in rural, northeast Pennsylvania. They’ve been identified while riding the subway (“the woman recognized Kippee, not me”), and she recalls getting scolded by a police officer for letting the bird roam free at a park: “‘He says, ‘Excuse me ma’am, is that your hen? She has to be on a leash.’ It was the most ridiculous conversation ever had by two people.” (Oakes has no worries that Kippee will bolt or stray since she’s so attached.)

Besides being an author, blogger, and houseplant expert, Oakes is also a sustainable fashion advocate and model. To keep the animal’s anxiety at bay, Oakes began taking Kippee along on photo shoots, which eventually resulted in the hen getting work of her own, including campaigns with Lululemon, Celestial Seasons tea, fashion editorials, and even a bidet company (her first solo gig!).

As much as she loves her, Oakes knows Kippee can’t live in her Brooklyn apartment forever. When her community garden declined the idea of a chicken coop (they’d tried it in the past and didn’t want to try again), Oakes went looking for other options. After a few false starts, the pair has finally found Kippee’s forever home: Los Sures, a community-based non-profit and senior center in Williamsburg, Brooklyn, just a few blocks from Oakes’ apartment. Oakes is raising money to restore the existing coop at Los Sures, which keeps hens as part of its larger food justice program. (The organization also operates a small hydroponic farm and manages local gardens to help feed and support the community.) The goal is to have the coop restored by early summer and then start acclimating Kippee to the rest of the flock, so she can be with other hen friends.

So what’s life like with 500 plants and a hen in a 1,200 square-foot Brooklyn loft? Oakes was kind enough to share some photos with us – just scroll down. And while the Los Sures coop fundraiser has already met its modest goal, every bit helps – and all goes back to the community center. Read more and donate here. 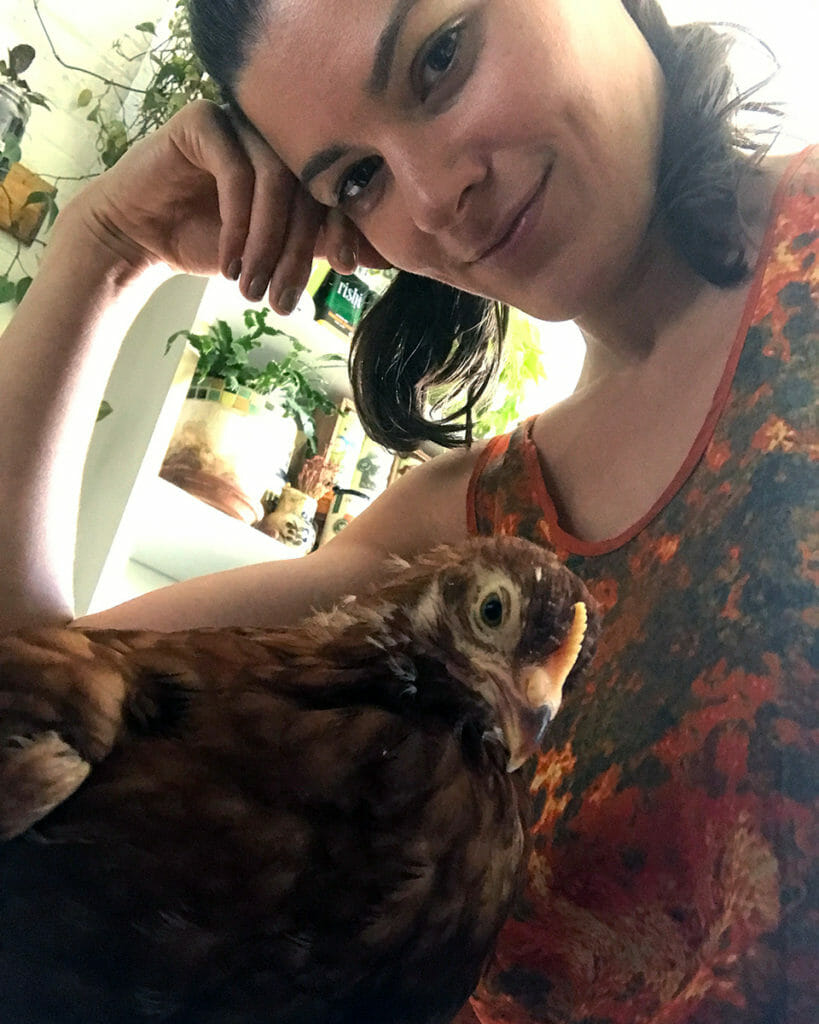 This was the first day I brought the little Kip home. My friend named her “Kippetje,” which means “little chicken” in Dutch. She’s no longer a little rugrat, so I call her “Kippee” now.

She loves to perch around the house, so if I’m sitting at the kitchen table, she’ll come up to my level. 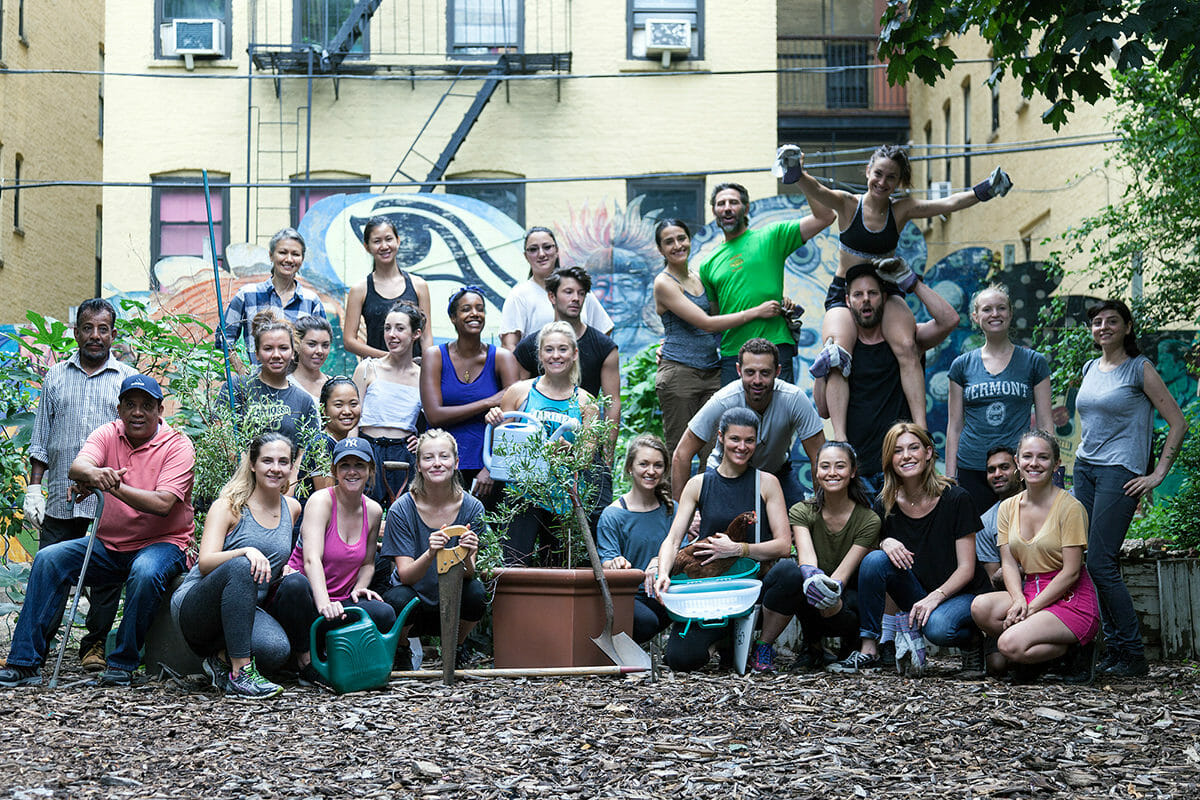 This was a big volunteer day that we did at Espiritu Tierra Community Garden in Williamsburg, Brooklyn. As you can see, we were able to get quite a crew together to join in on the fun! This is the garden that Kippee gets to play in during the spring, summer, and fall. 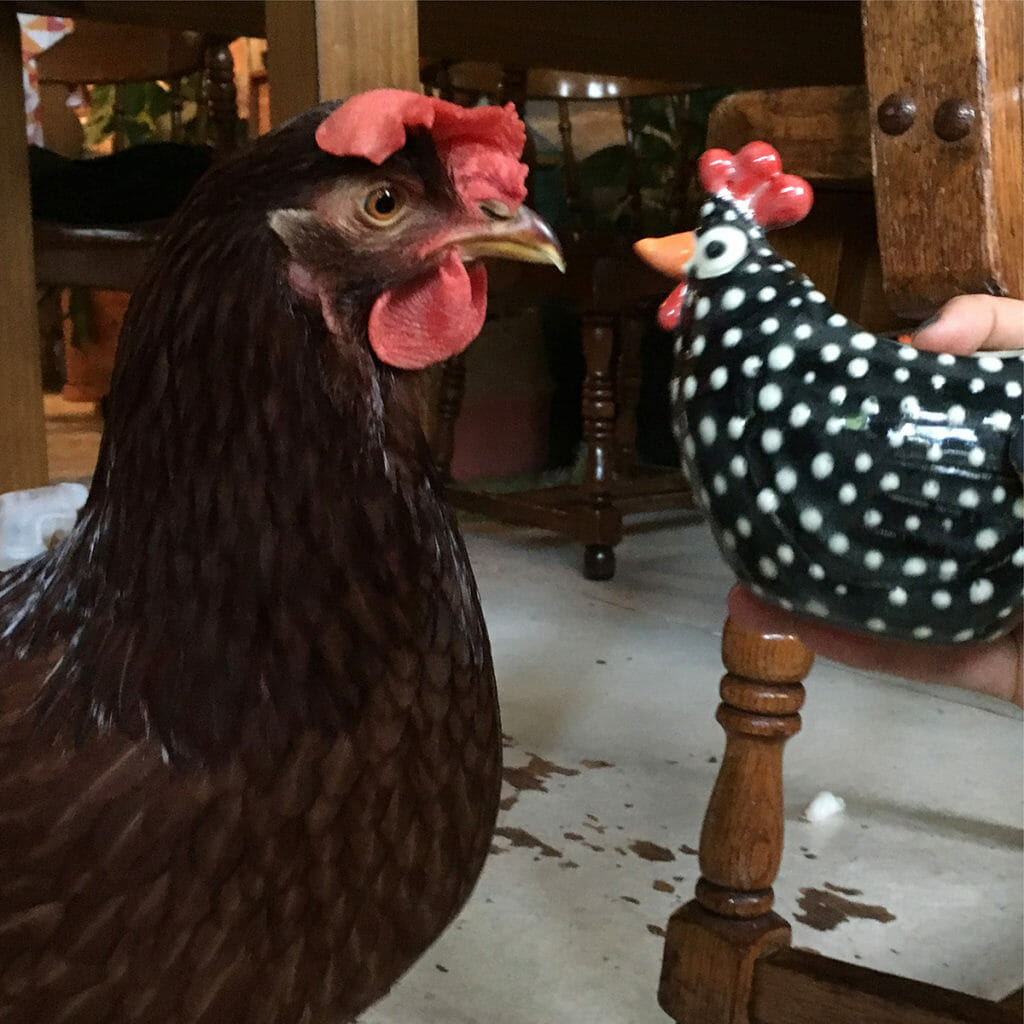 Kippee hates any planter with a face. I think she’s either jealous or annoyed. Here, I got a new chicken planter and you can tell she didn’t take too kindly to it! 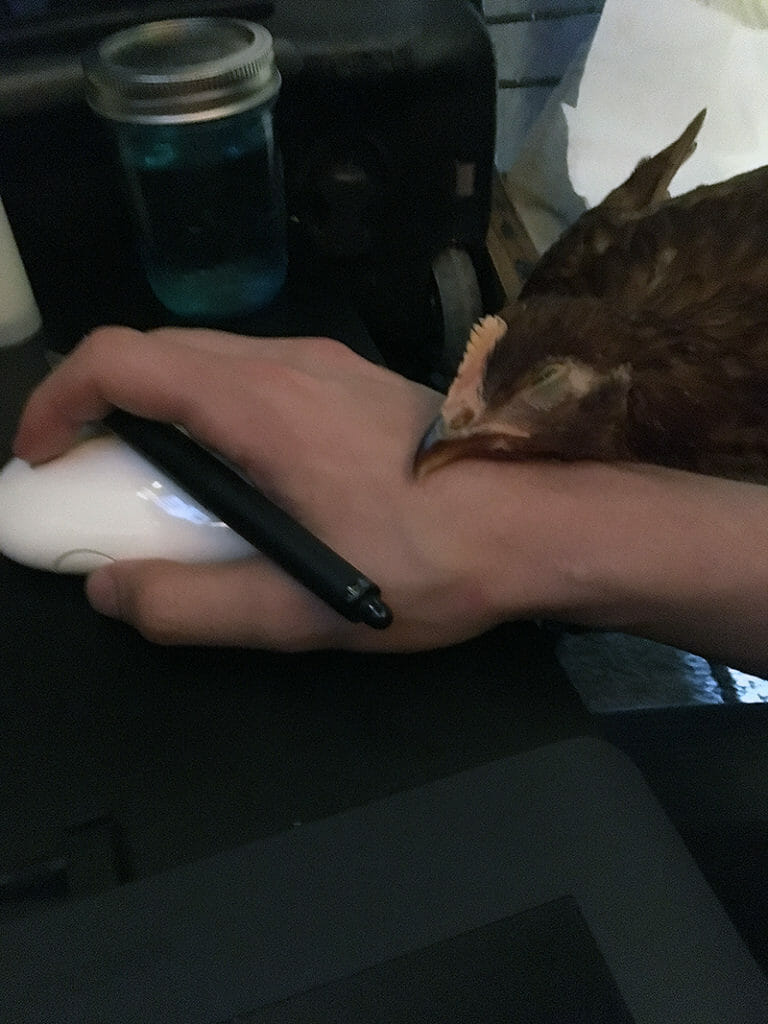 Tough to get anything done when you have a chicken resting on your work hand! 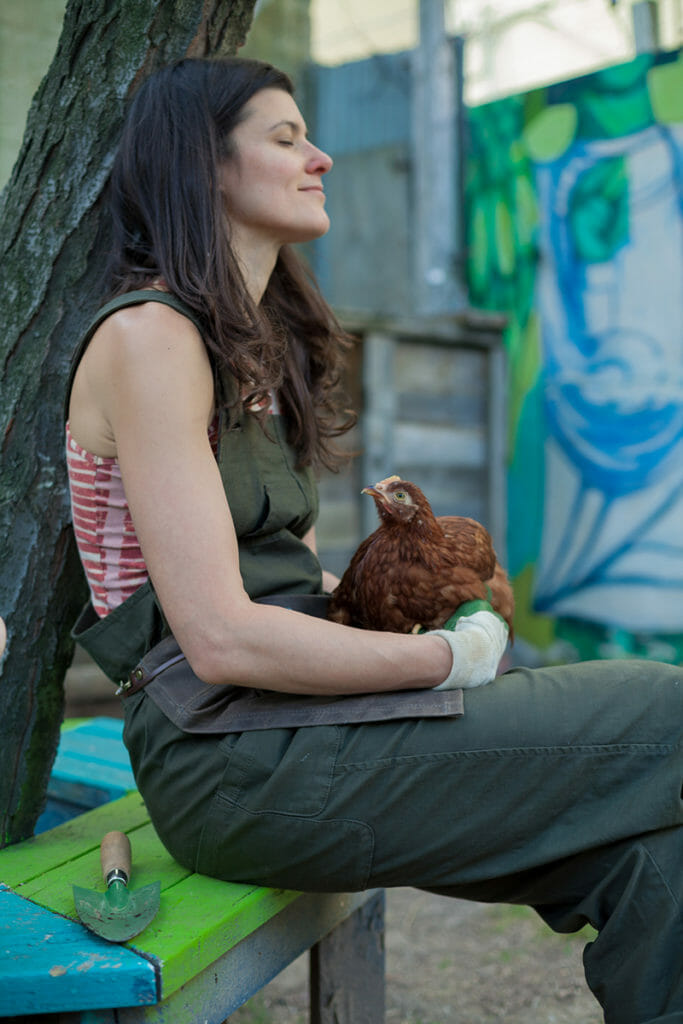 Here she is taking a break on my lap. She and I really bonded in the first couple months, which is why I suppose she imprinted on me so heavily. 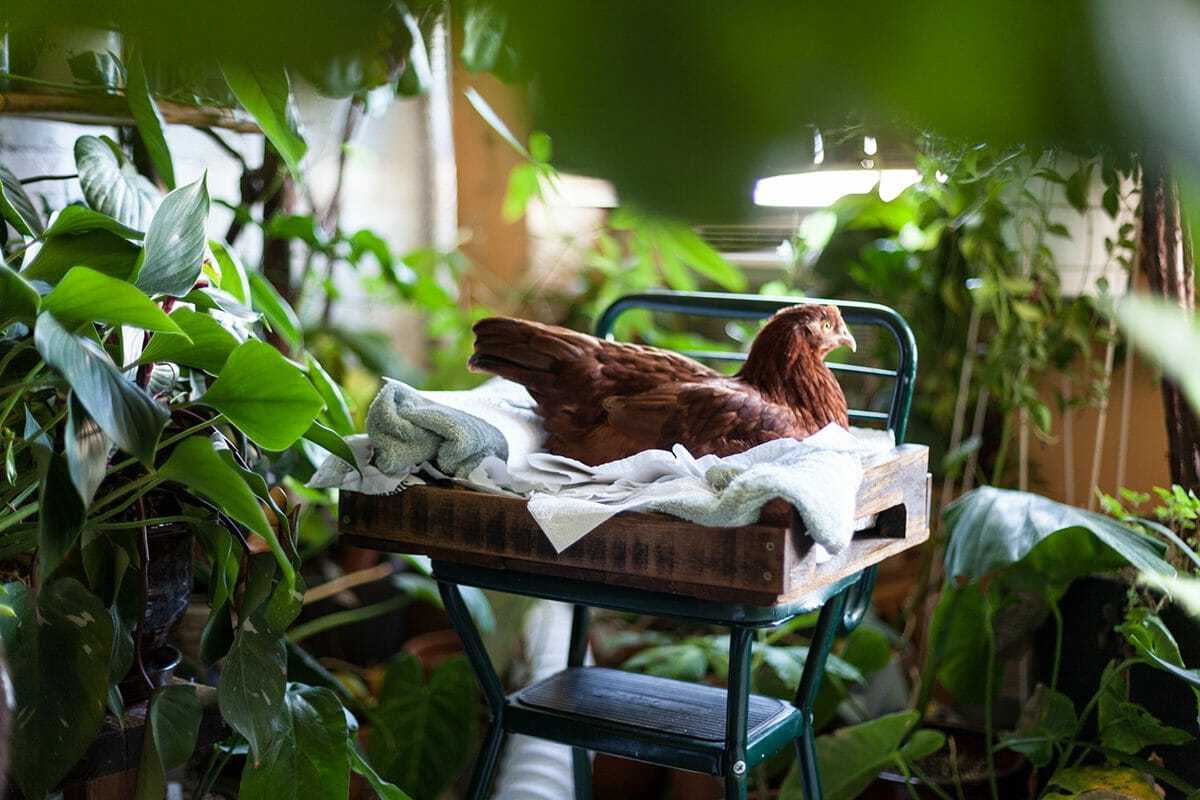 “Queen of the Jungle.” My dad actually made that platter for me out of old wood so I can have “breakfast in bed,” but ironically Kippee loves sitting in it. I call it her “magic carpet” because it often lifts her up to the door at night so she can sleep there. 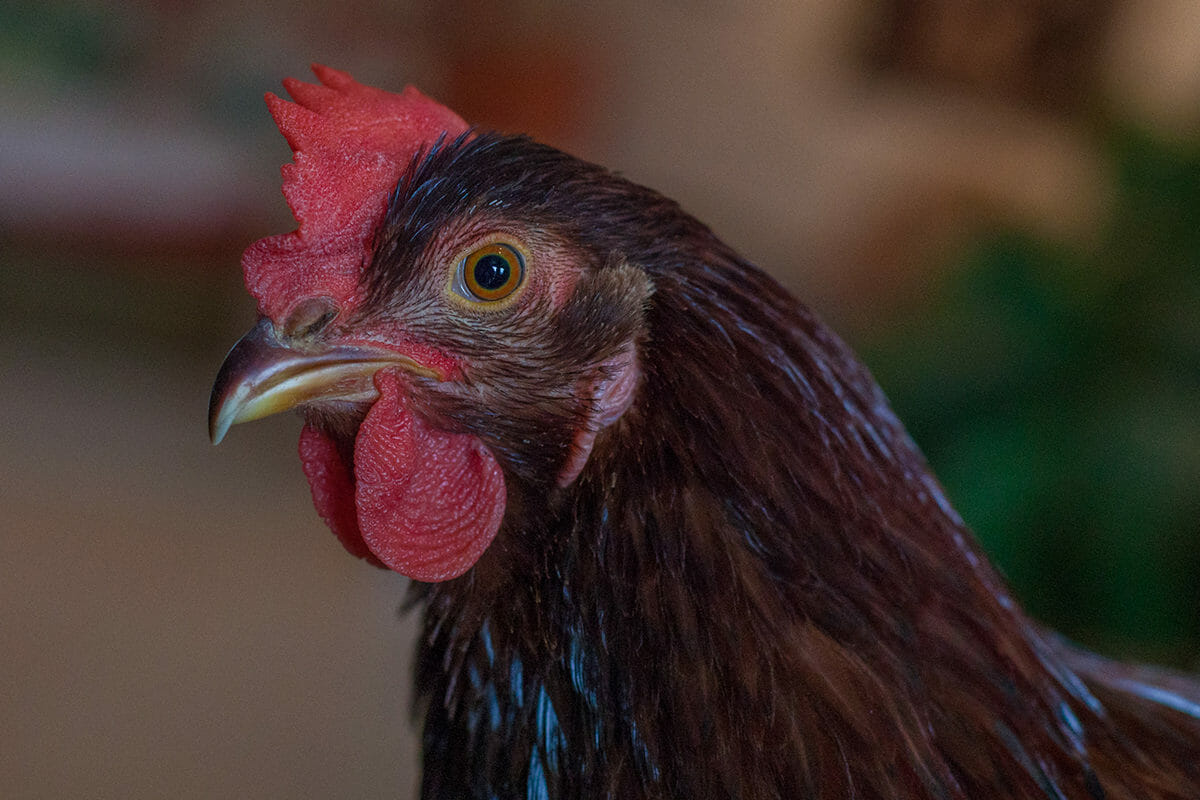 Kippee has a large floppy comb, so many folks mistake her for a rooster. I just tell them, “She’s androgynous.” 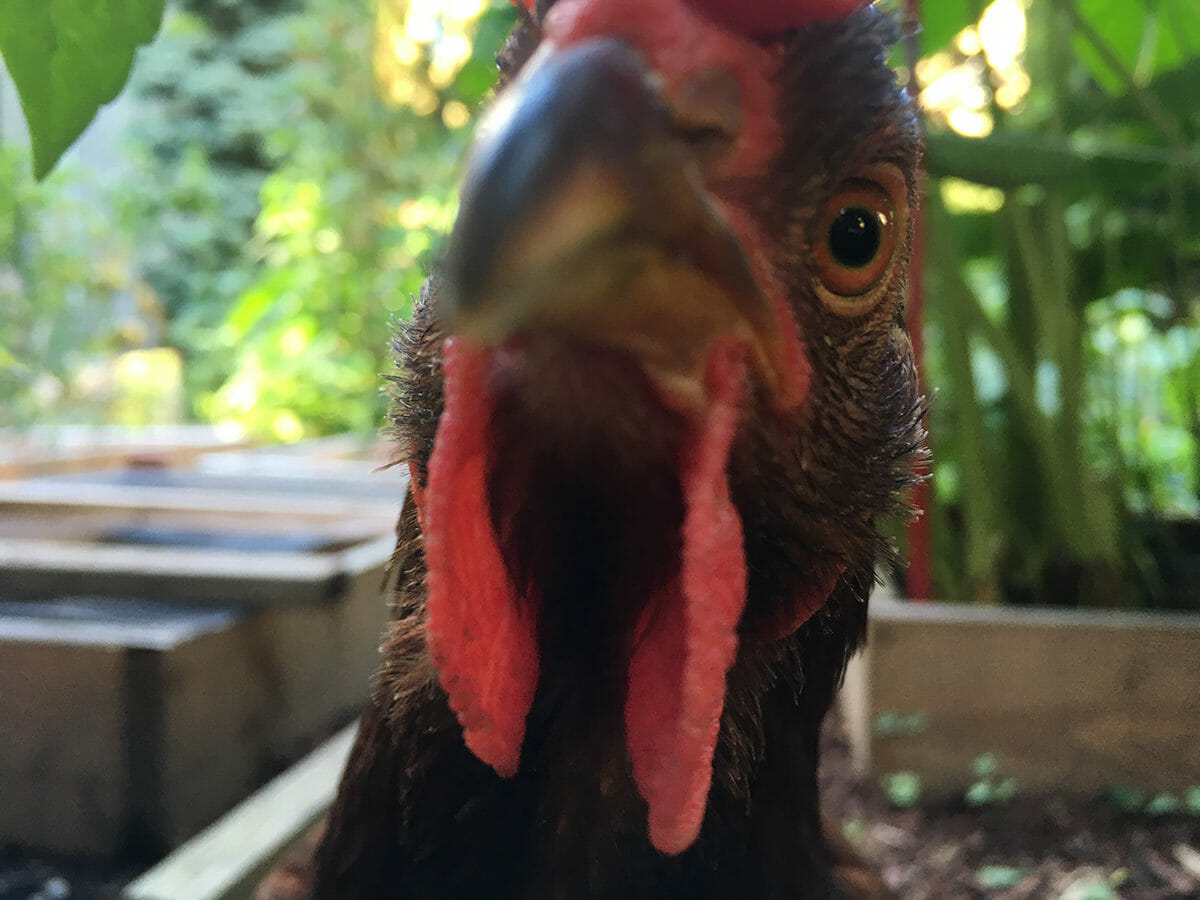 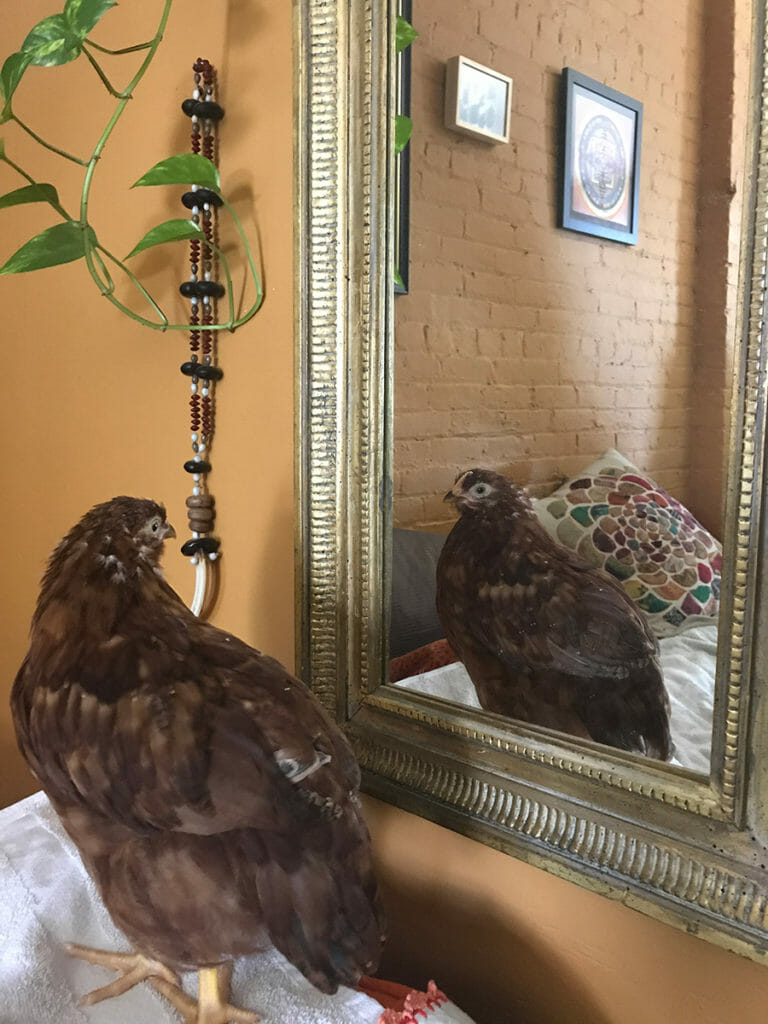 I don’t know if she’s a narcissus, but Kippee sure loves looking at herself in the mirror! People are always discarding mirrors around NYC, so I picked up several and lined the walls in some areas of the house at “chicken height.” It’s not clear to me whether she recognizes her own reflection, but she surely loves to preen herself in the mirror. 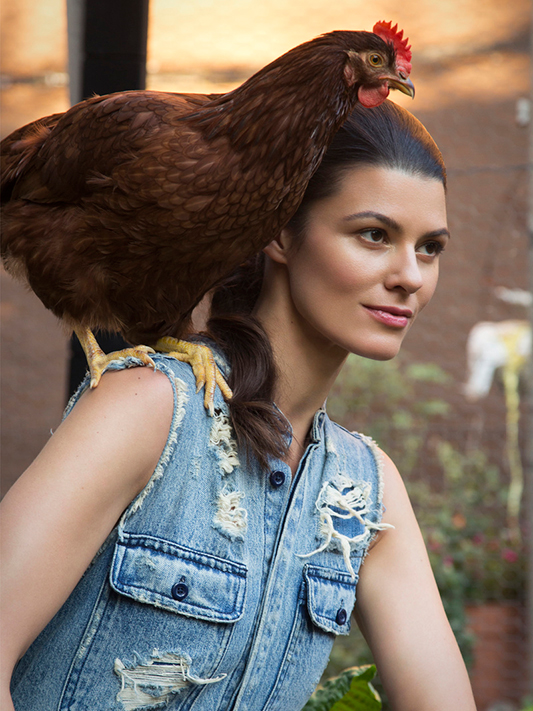 I sometimes take Kippee to work with me. Here we are on set for a shoot for JeJune Magazine. This was taken up in Harlem at one of the community gardens, which also has chickens. Their chickens admittedly weren’t as friendly! Original Publication: Jejune Magazine; Photography: Kira Bucca Photography; Stylist: Alison Hernon; Make-up: Joshua Barrett; Hair: Damian Monzillo 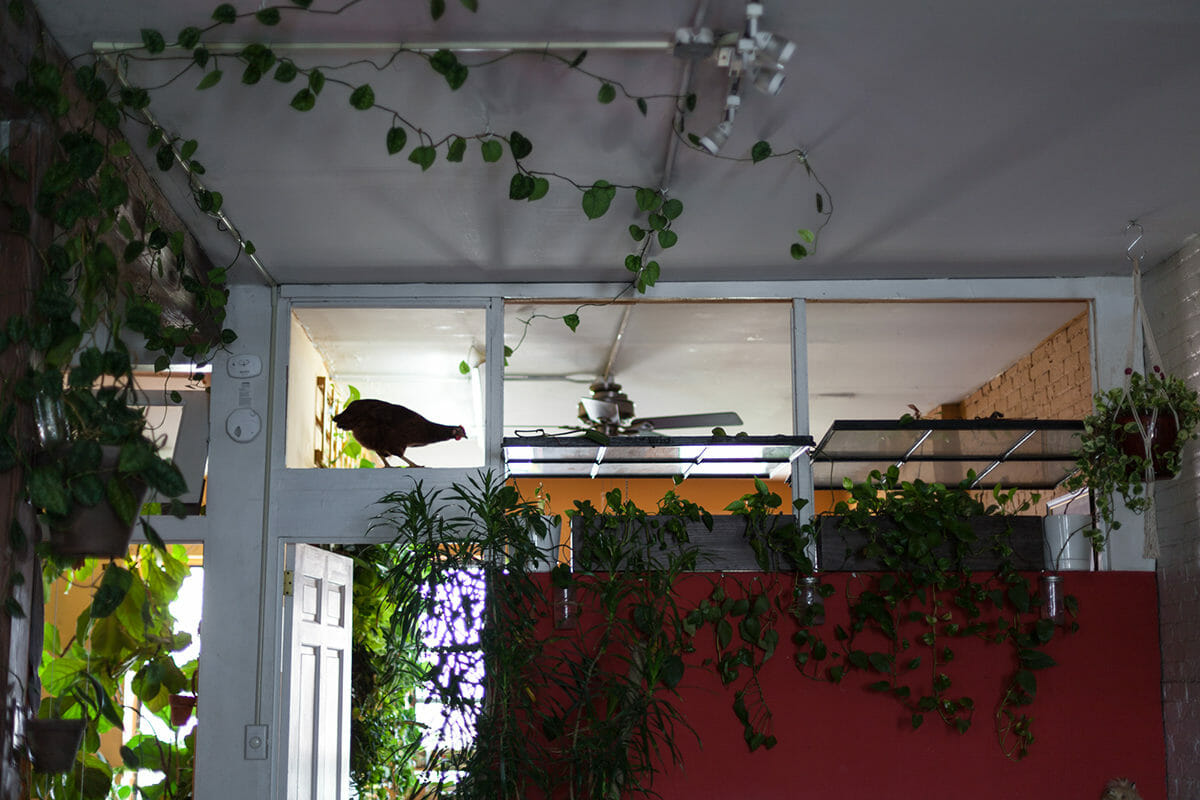 A silhouette of Kippee in my home. When it’s approaching evening hours, she tends to like to roost up above the door, as it’s still near me and it’s likely where she feels the most safe. Oh, for those wondering: yes, Kippee does eat some of the plants – she especially enjoys maidenhair ferns, calatheas, dieffenbachia, and pothos. She completely mowed down my pothos. I had to trim it way back, it was just vines. 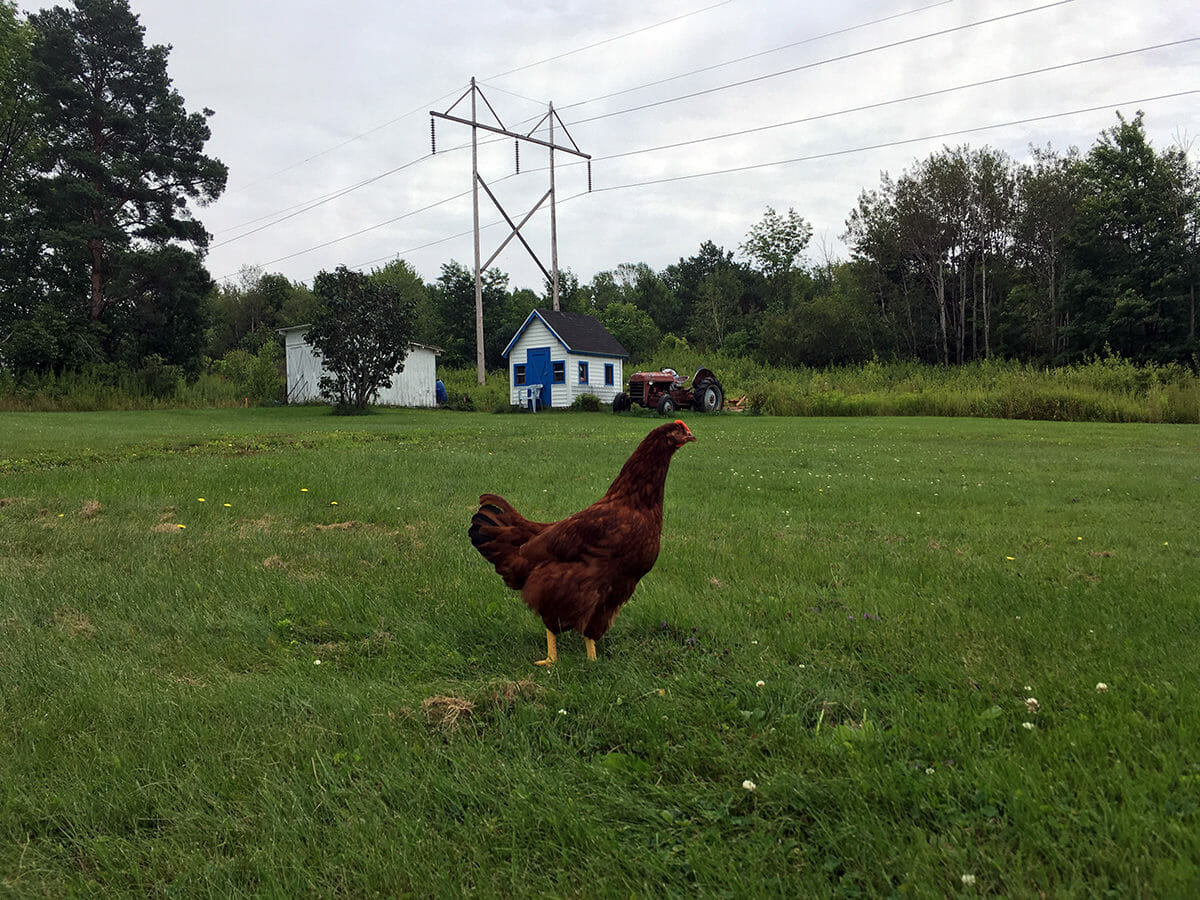 Kippee got her first taste of the country in Pennsylvania when I took her to my grandmother’s house. Here she is a “yard bird.” 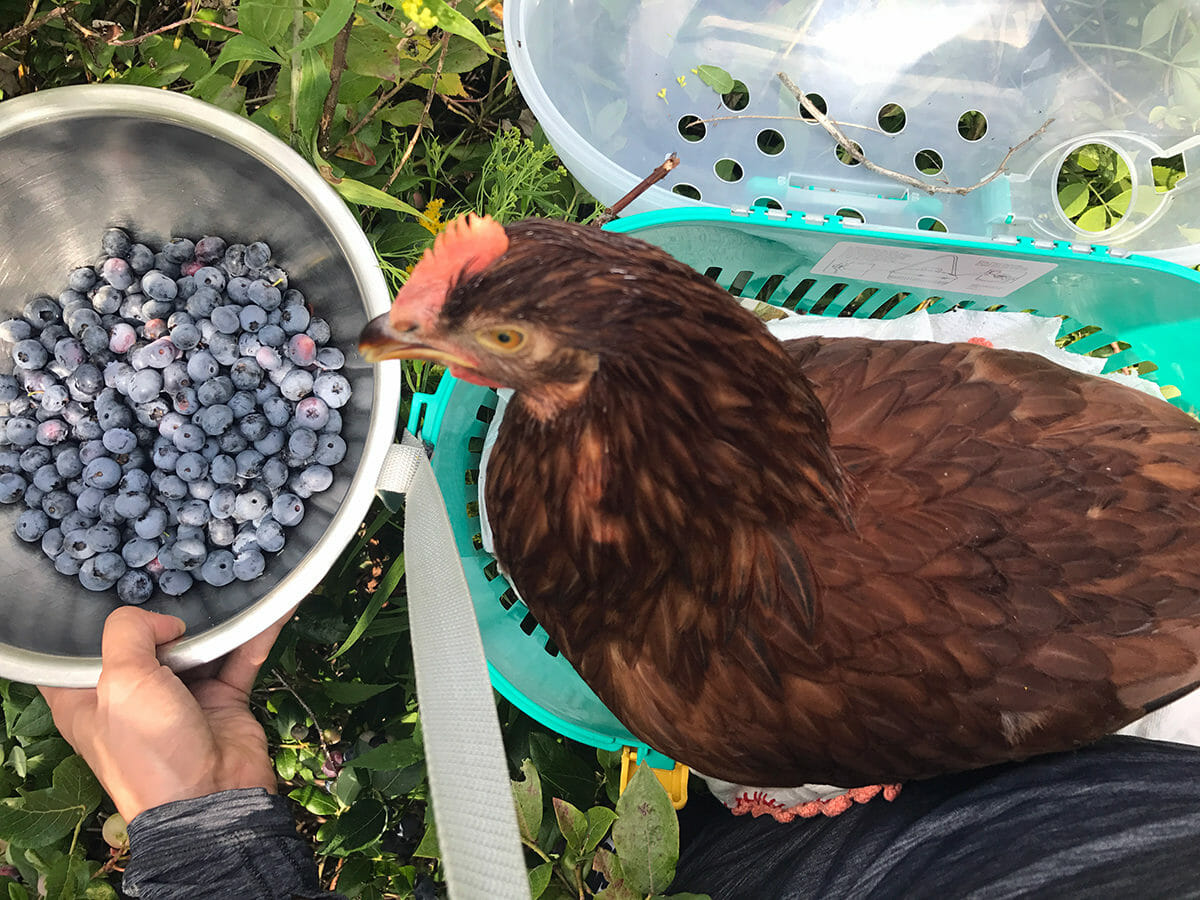 Every year I go home to Pennsylvania to go blueberry picking with my father. This year I had to bring the hen, so Kippee helped pick (and eat) blueberries with me! 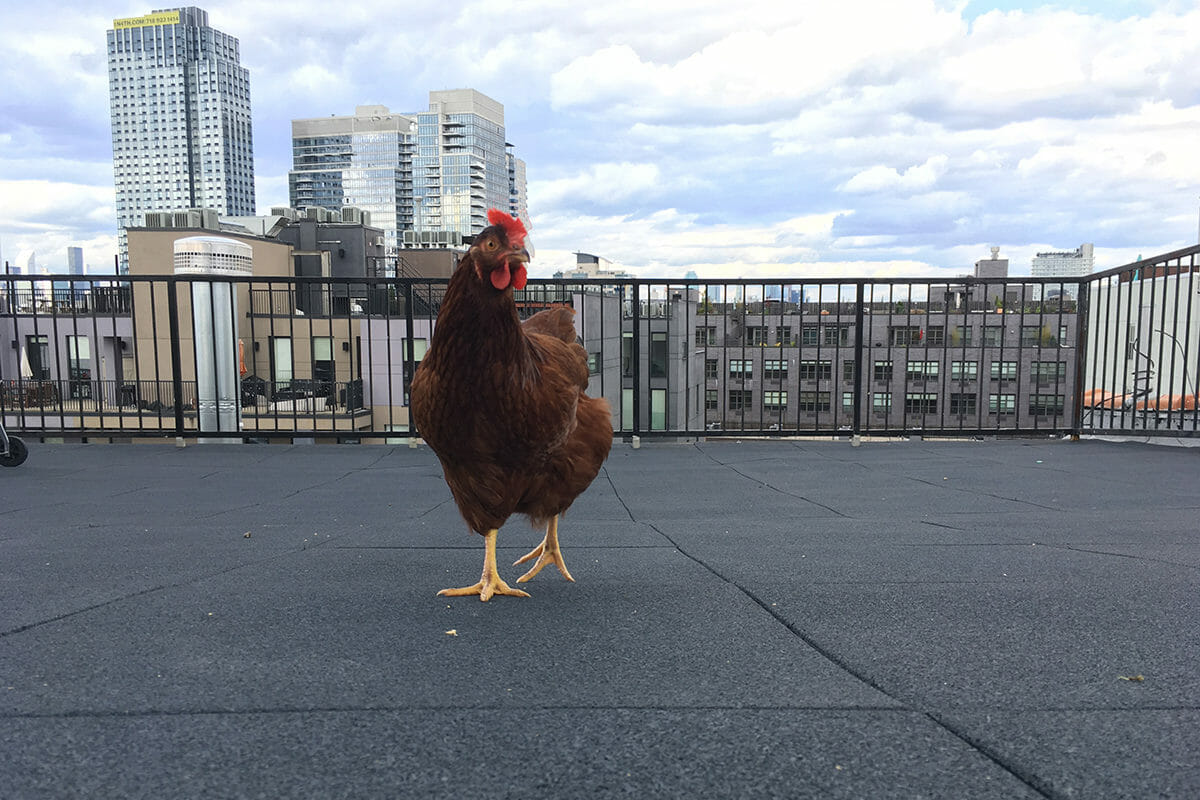 Kippee is very much a “city slicker.” Here she’s enjoying a nice view of Manhattan. 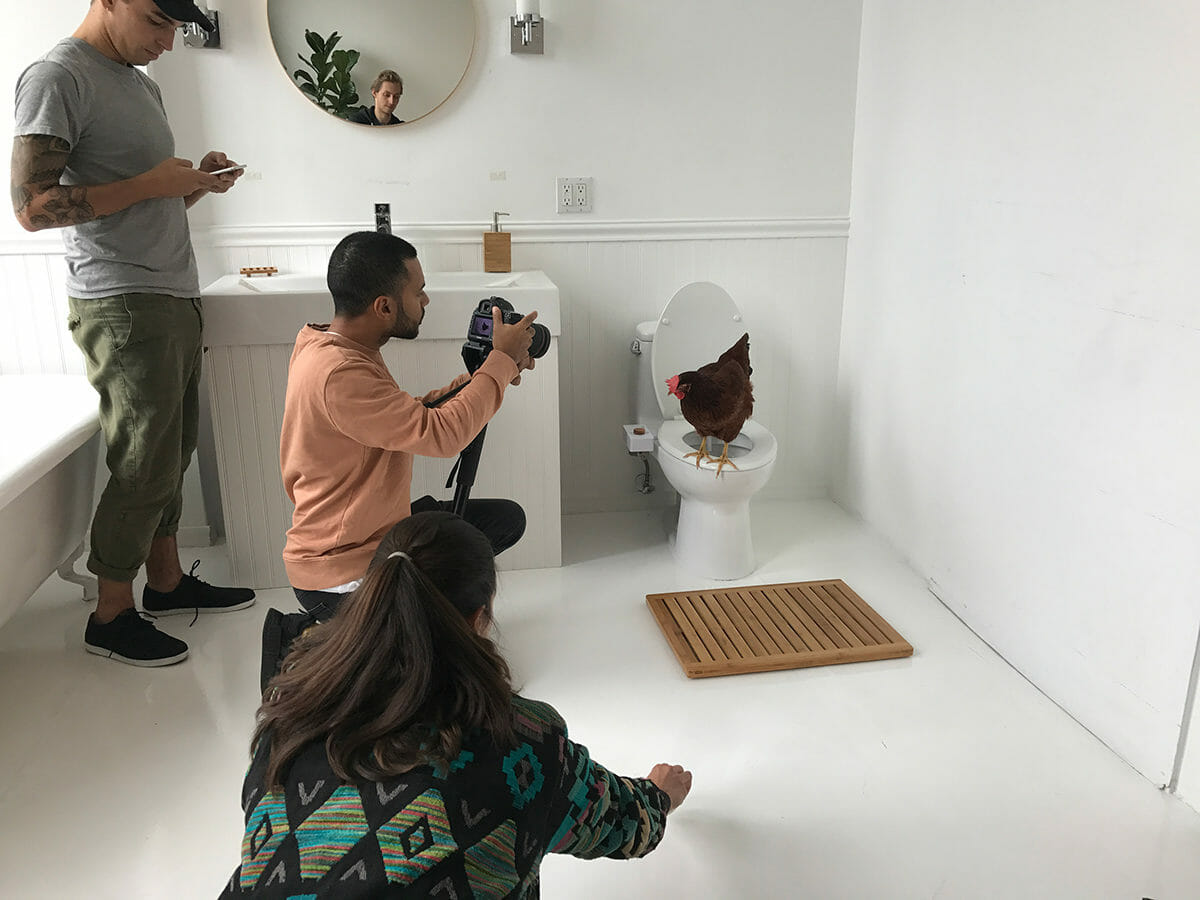 Kippee modeling for her first solo campaign (see next photo). 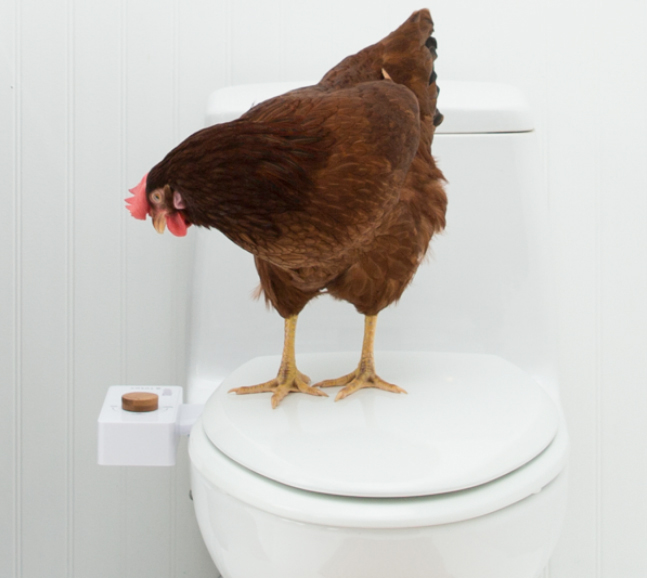 I wish I could say my chicken is potty trained, but she’s not! Here she is on a toilet for a campaign with Tushy, a bidet company. 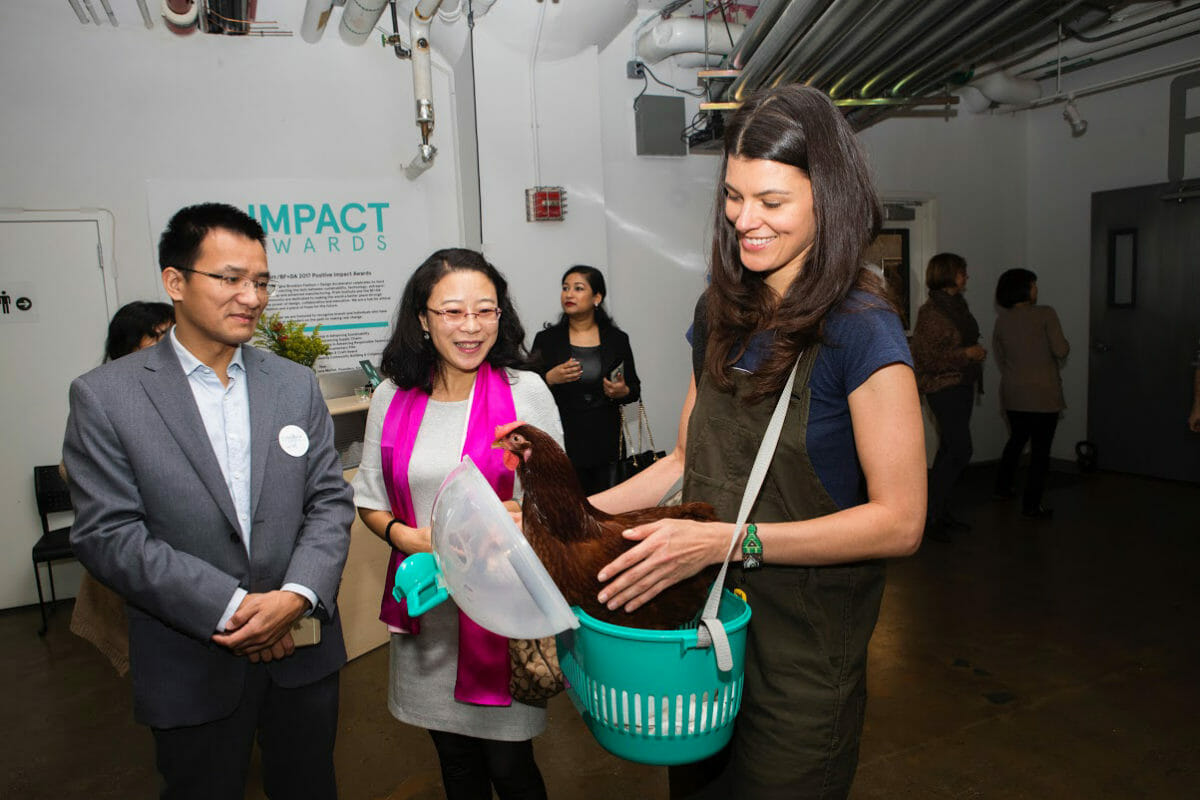 Kippee has separation anxiety, so I often have to take her to events with me. Here we are at Pratt Institute’s Brooklyn Fashion + Design Accelerator Positive Impact Awards in 2017. Luckily, she’s quite social and tends to draw a crowd (as well as smile on people’s faces). Photo: Michelle Gevint 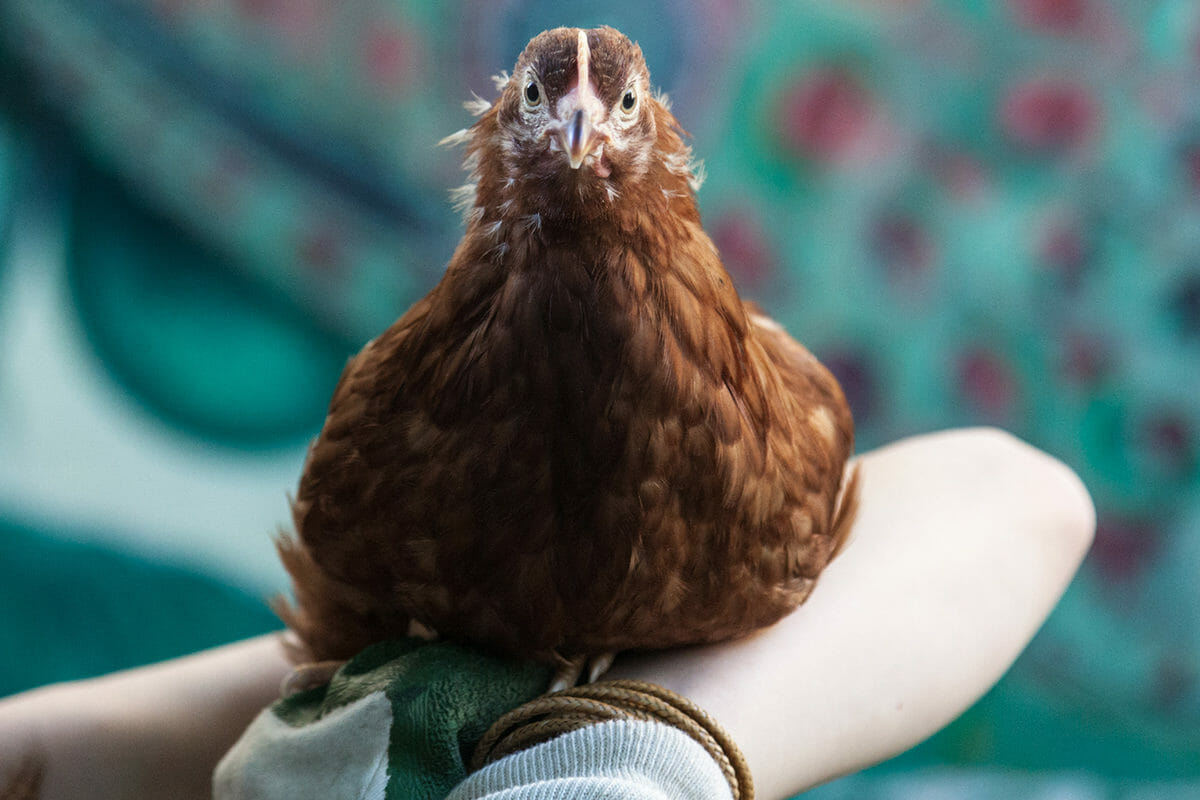 Kippee looks so funny straight on! This was one of the early days of taking her out to the community garden. She didn’t want to separate from me. 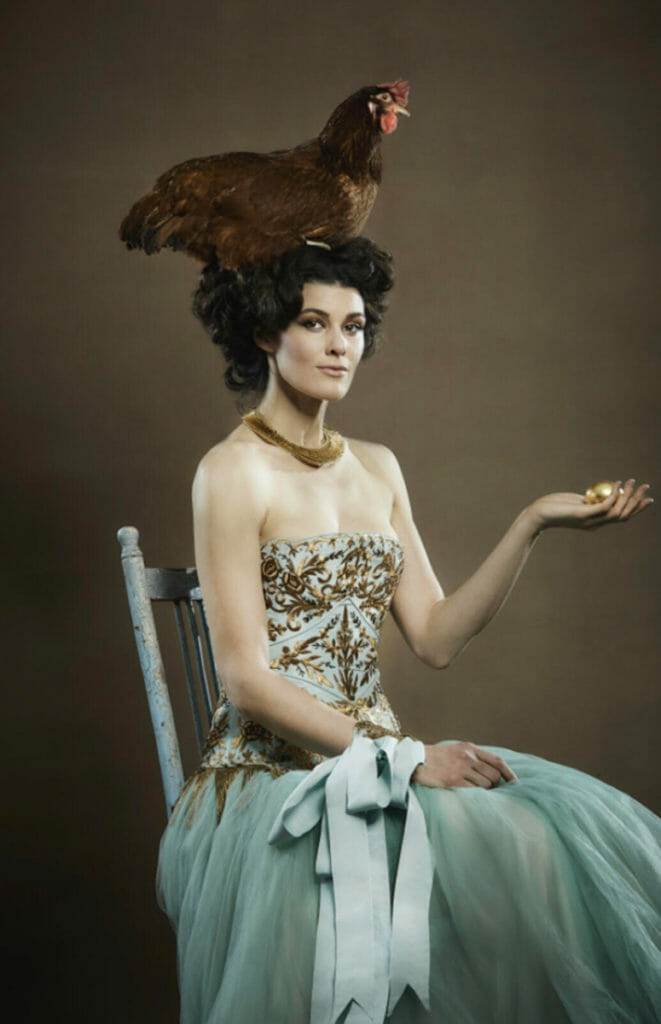 I couldn’t do this photo diary without sharing one of the more elaborate photos of Kippee and myself. When I was told they were going to style my hair like a nest, I was skeptical. But it’s so great, and it was amazing to be a part of such a beautiful shoot. Style & Production: Cynthia Altoriso; Photographer: David White; Clothing: Maggie Norris; Jewelry: Estyn Hulbert; Makeup: Jerry Lopez; Hair: Yasurake’; Backdrops: Charles Broderson