A former musician shows his Corn Belt neighbors that organic is an option. 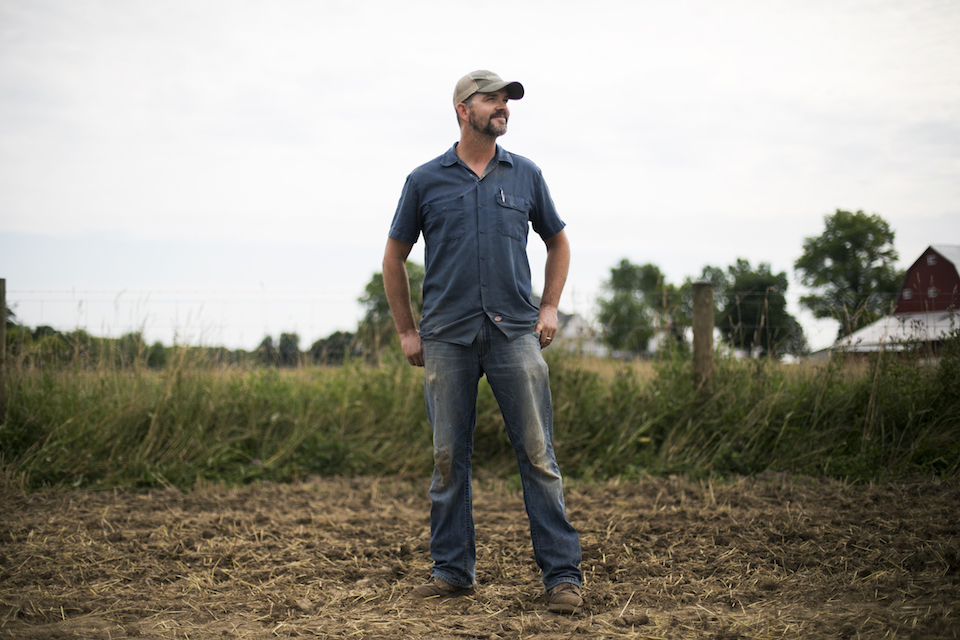 After spending his 20s as a touring musician, Ryan Alexander moved home to take over his family farm in Wilmington, Ohio.
Share
Tweet
Pin
Email
701 Shares

After a couple of years balancing a grueling tour schedule with a full-time job, Ryan was ready to settle down. His 30s were quickly approaching, and he’d also fallen in love with the sister of the Tsybil’s drummer, a woman named Melissa Chapple. “When Melissa and I started taking about getting married and having kids, we got to dreaming about going back to the farm,” he says. “Next thing you know, we’re doing more than dreaming.” 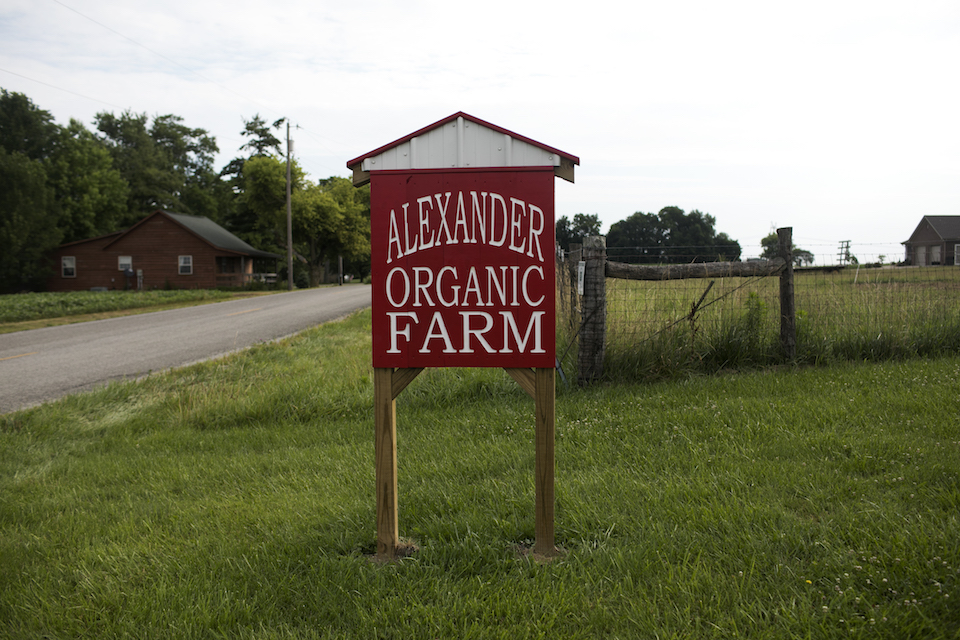 It took seven years for the Alexanders to get all 200 acres of their land certified organic.

The couple moved home in 2007, right about the time that Ryan’s father, Stewart, began considering retirement. Though Stewart had been running a conventional corn and hog operation, going organic had always seemed like a worthwhile challenge. Ryan and Melissa took the reins and decided to give it a shot.

The first step? Repairing the soil through the use of cover crops, specifically a hay mix of orchard grass and legumes that help smother weeds and put nitrogen back in the ground. The new farmers started small, devoting about 40 of their 200 acres to the effort. Three years later – that’s the transition period required for organic certification – the couple produced their first certified corn crop. That year, they also welcomed their first child, Violet.

It took seven years to certify all 200 acres. Ryan rotates corn, soybeans, oats, hay, winter wheat, and radishes through his fields, and also raises cattle and poultry (and occasionally, hogs), too. The crops and livestock choices are meant to compliment each other, and the family sees to it that nearly everything produced on the farm is somehow put to use. For example, those cover crops do more than restore the soil – they also help to feed the animals, whose manure, in turn, helps fertilize the fields. The Alexanders are hoping to be an example for their community. “We’re in the middle of conventional corn country, we’re on display,” Ryan explains. “If we can stay in business and show our neighbors that this a viable option, that’s the biggest accomplishment that I could ask for.” 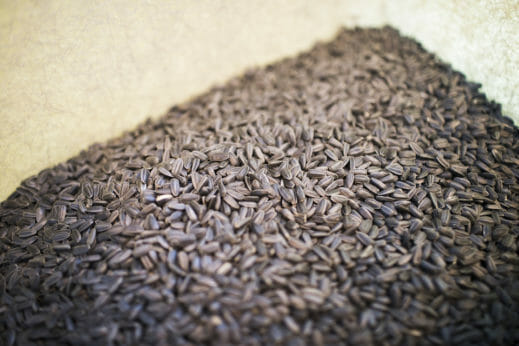 Organic sunflower seeds waiting to go into the ground. 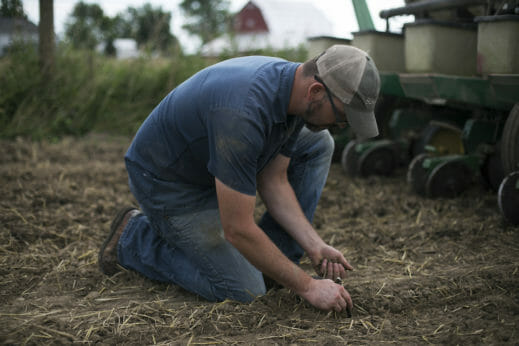 Ryan Alexander plants the seeds on a morning in early July.

Last summer, the Alexanders were approached with an enticing proposition – a new natural beauty start-up called Seed Phytonutrients was looking for a partner to grow sunflowers to provide sunflower seed oil for their products. Melissa had already been growing the plants around their property to attract pollinators and provide seed for their poultry feed, so they were excited to add the crop to their rotation. Sunflowers have large taproots, which help counter soil compaction, while their height and broad leaves help shade out weeds that would otherwise need to be managed. They’re also a hardy crop that can go in later in the season, which can potentially mean doubling the land’s usage. 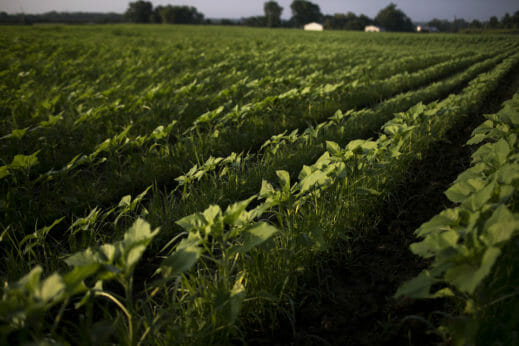 Sunflowers are a hardy crop that can go in later in the season. The Alexanders were able to plant these in early July, after a field of wheat was harvested. 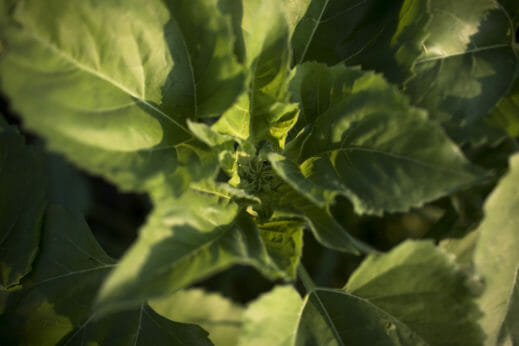 The plants’ height and broad leaves help shade out weeds that would otherwise need to be managed, making them a welcome addition to the farm’s crop rotation.

“We had a field of wheat that was looking good to mature earlier than usual,” Ryan says. “We were able to harvest that, prepare the soil bed, and get the sunflowers planted in early July.” 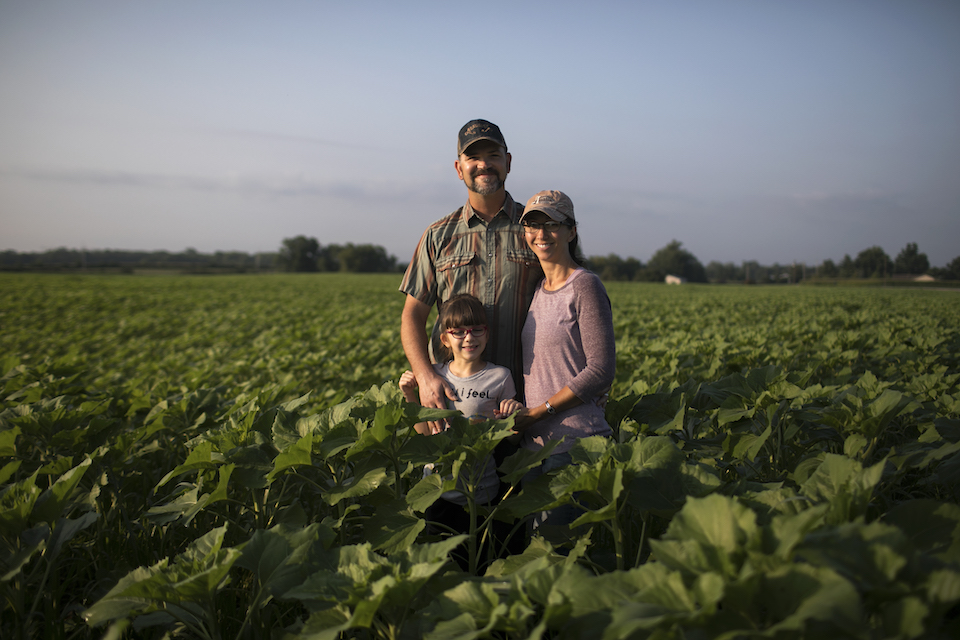 The Alexanders – Ryan with his wife Melissa and daughter Violet – pictured in the field of sunflowers they grew for Seed Phytonutrients. 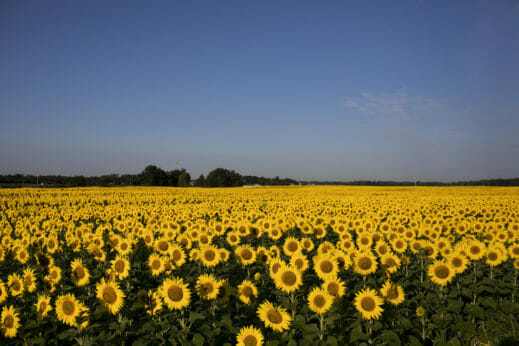 The first sunflower crop was a success. 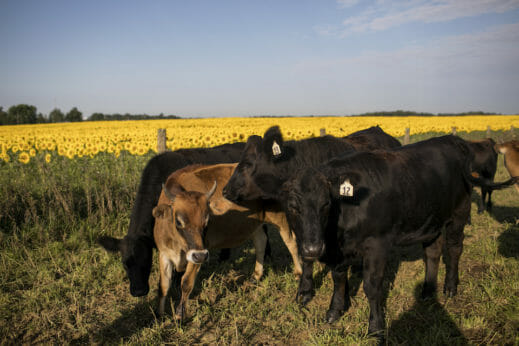 An unusually wet autumn delayed what would have typically been an early-fall harvest until November, but overall, the crop was a success. When a gamble like this pays off, it means a lot to the Alexanders – and not just financially. Ryan sees it as a chance to help change the idea of what farming in Ohio can look like. “We’re kind of the lunatic fringe people around here,” he admits. “But someone needs to be the example. Everybody wants somebody else to jump into the water to see if they float.”

Popular
How to (Actually) Get Rid of Fruit FliesEmily Baron Cadloff
7 Smokable Plants You Can Grow That Aren’t MarijuanaBrian Barth
What to Do With an Abundance of PeppersShelby Vittek
Goat Sex: Everything You Wanted to Know But Were Afraid to AskAndrew Amelinckx
6 Differences Between Llamas and AlpacasAndrew Amelinckx
Explore Modern Farmer
Related
Food & Drink, Plants
In Awe of the PawpawDanny Childs
Animals, MTMF
Paddleboarding Goats Make a Splash on Prince Edward IslandNoah Lederman
Food & Drink, MTMF
Meet the Georgia Farmers Who Love to JamEmily Baron Cadloff
Plants
Researchers Propose a New Way of Regulating Engineered CropsShea Swenson
wpDiscuz
We use cookies on our website to give you the most relevant experience by remembering your preferences and repeat visits. By clicking “Accept”, you consent to the use of ALL the cookies.
Cookie settings ACCEPT
Privacy & Cookies Policy