A farm in North Carolina is the site of cutting-edge animal agriculture research - and a few ghosts. 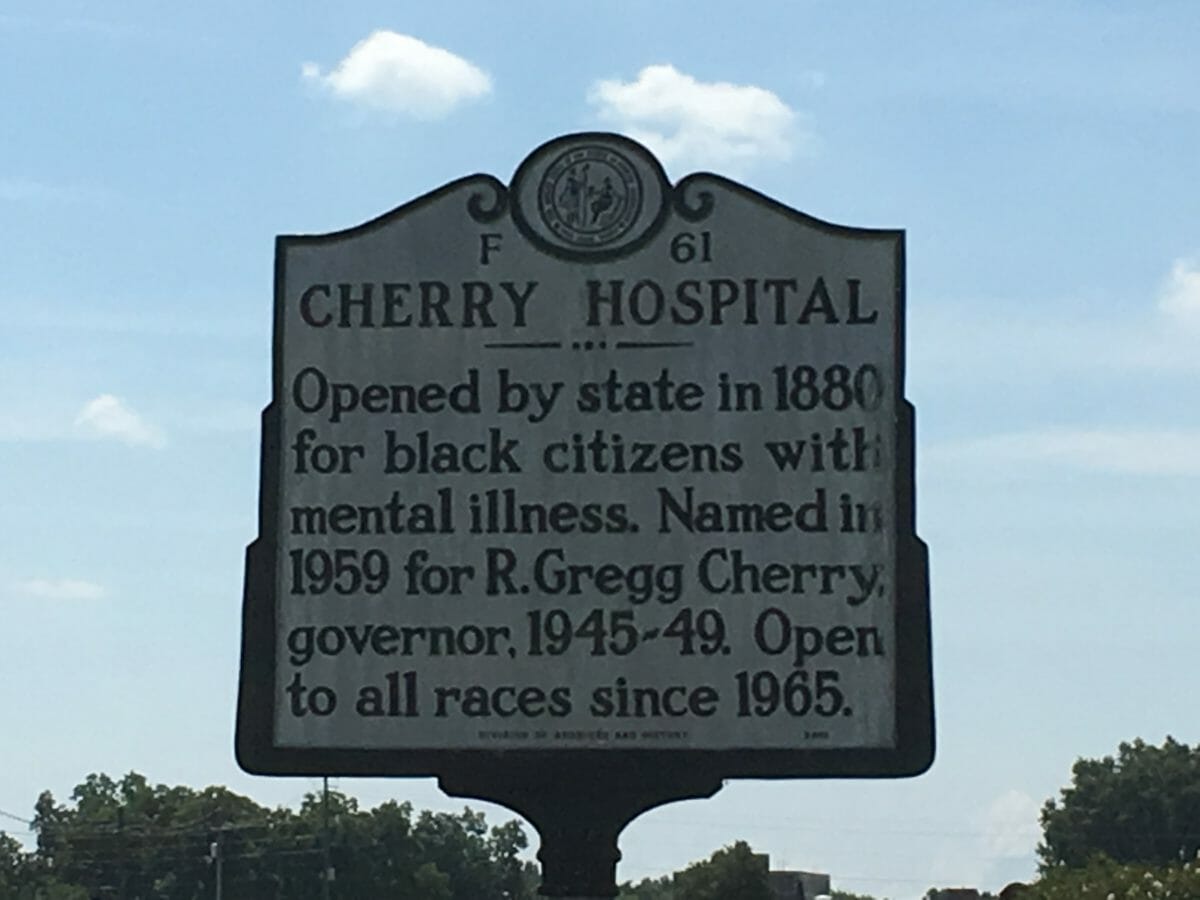 Moreno, a soft-spoken Panamanian man, is part of a team of researchers at Cherry Farm, a 2,200-acre facility about an hour outside of Raleigh that is jointly operated by the North Carolina Department of Agriculture and the Center for Environmental Farming Systems at North Carolina State University. It is one of the largest and most important sites in the country for long-term sustainable agriculture research. Among dozens of other projects, Moreno and his colleagues have been comparing emissions from six different cropping systems in hopes of developing cultivation techniques with a lower carbon footprint. 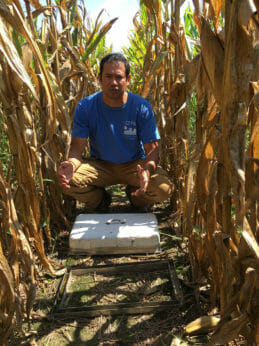 Tomas Moreno in the fields of Cherry Farm.

Following the cables that snake from an air-conditioned trailer at the edge of the corn field, in which an array of sensitive scientific equipment is housed, we approach a tiny plastic dome over the soil where air samples are collected for analysis. We nearly run headfirst into an enormous and sinister-looking spider stretched out on a web between the fading stalks. The hair on my neck suddenly stands on end – and not for the first time in the hour since I arrived.

Cherry Farm, sandwiched between a state penitentiary and a rehab center for paroled drug offenders, strikes me as a desolate spot to conduct sustainable agriculture research. I joke with Moreno that it must be a spooky place to work. I’d be paranoid about who might be lurking in the bushes every time the wind rustles the leaves. He replies that there is more to the story of Cherry Farm than the occasional threat of escaped jailbirds. “You must have heard,” he says, trailing off, his eyes darting about a bit furtively. “Cherry Farm has a strange history.”

For nearly a century, Cherry Farm served a very different purpose: it formed the grounds of Cherry Hospital, a notorious mental institution founded in 1890 as North Carolina’s “Asylum for Colored Insane,” as a historical placard informs me as I leave Moreno to putter through what amounts to a small village of dilapidated buildings on one side of the farm. It was the sole mental institution for African-Americans in the state until the Civil Rights Act came along in 1964 and forced Cherry Hospital (it had been renamed for the former governor R. Gregg Cherry in 1959) to desegregate and start admitting white patients.

While it looks to me like a ghost town – the austere red-brick buildings, many of them with busted windows and weeds growing from the roof, appear long-abandoned – Cherry Hospital operated at the site until last year, when the residents were moved to a new facility up the road. The fields where Moreno now works produced food for the residents of Cherry Hospital, many of whom worked the land as part of their therapy, and generated income for the institution until 1974, when the NC Department of Agriculture assumed ownership of the farm.

An 1884 report from the asylum’s superintendent bragged about the productivity of what was then a 171-acre enterprise: “80 barrels corn, 6,000 pounds of fodder, 50 bushels of peas, and 3,000 pounds of oats. We now have 37 hogs for butchering and estimate their weight at 4,000 pounds. An accurate account of the vegetables has not been kept, and the value of our kitchen garden can hardly be estimated. The orchard again gave us apples in abundance.”

The farm was expanded as the population of Cherry Hospital grew to over 3,000 individuals. While horticultural therapy would now be considered a progressive form of treatment for mental illness, it’s not clear how therapeutic it actually was for a population only recently removed from slavery – picking cotton was one of the residents’ farm duties, for example. Other forms of “treatment” used at Cherry Hospital – including electroshock therapy and locking troublesome patients in cages (a practice that was not abandoned until 1956) – certainly were not.

Local rumors that the place is haunted may stem in part from the two cemeteries at the site, where deceased residents of Cherry Hospital were routinely buried without a proper funeral. Hundreds of graves are marked solely with a number that corresponds to the person’s I.D. at the institution, while thousands more unmarked graves were identified in a 2002 archeological study. A local author is currently researching a book on the stories of paranormal activity that have accrued over the years.

To some extent, it seems that the decrepit conditions at Cherry Hospital have extended into modern times. In 2008, the hospital’s federal funding was nearly revoked following the death of a resident under suspicious circumstances. According to news reports, the person, who was suffering from a medical condition, died after being left unattended with nothing to eat for several days. A security camera revealed that negligent hospital staff were “watching TV and playing cards a few feet away” as the patient succumbed to their illness.

One of Cherry Hospital’s most horrifying cases came to a close in 2001 with the death of 93-year old Junius Wilson, a deaf man who had been a resident since he was 17. Wilson was accused of attempted rape in 1925; assumed to be insane because he communicated only in grunts and strange hand gestures, he was locked up at the Asylum for the Colored Insane. The cooked-up rape accusation was finally dropped in the 1970s, but it wasn’t until 1991 that a social worker realized Wilson was not mentally ill, but merely deaf – he used a unique form of sign language taught to African-Americans in the South historically, which had apparently been misinterpreted as the wild gesturing of a crazy person. 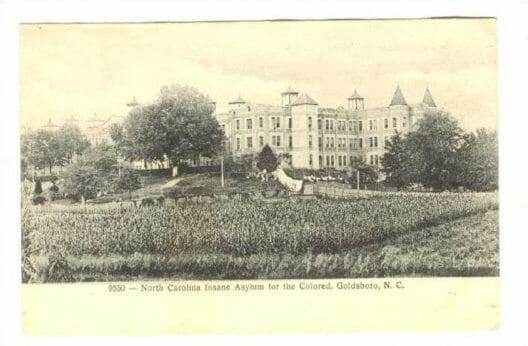 Not only was Wilson falsely accused, and essentially left to rot among mentally unstable people for seven decades, he was castrated by Cherry Hospital staff upon admittance – a not uncommon fate for people of color accused of rape at the time.

Wilson’s story made national news when it broke in the early nineties, and a book about his life,

, was published in 2007, which doubled as something of an exposé of the egregious conditions suffered by many other men and women at Cherry Hospital over the years.

After being freed from confinement, Wilson, who had no known living family members, was given a small cottage of his own on the grounds of the hospital. He had a yellow bike that he rode around the farm in his later years, and was often seen fishing at the river that ran behind the fields or tending to the dogs that he kept in one of the barns. Despite the horrors of his life, apparently he died in peace. So perhaps there is at least one benevolent ghost lurking in the cornfields here, as Cherry Farm transforms its heinous past into a brighter future.

Hidden history. The name should be changed to “Junius Wilson” Hospital For The MENTALLY ill. Unbelievable, the justice system has been corrupt and unfair to African Americans for decades. He’s definitely not the 1st and not the last.

I worked there for about 3 years. Reffering to the previous comment, I have heard tales of the woman in the window of an abandoned building. I never witnessed anything while working there, but plenty of times I have heard doors closing and opening from the empty floor above my assigned unit. And unexplained voices coming from stairwells within the building and the ones on the outside.

Dr. Brown discovered that Junious Wilson was not only deaf but was mute. This very nice old fellow was affecitonatly called “Dummy”. Dr. Brown wanted to pay, himself, to have him treated and fitted with a hearing aid but it was thought, at the time, that it might actually be a detriment to him. He could only make sounds. He was harmless.
I worked there during this time and had discussions, with Dr. Brown, about this.
It was not in 1991 that a social worker discovered this.

Additional info about Cherry Hospital. The government did experiments on stage 3 siphilus (spelling) patients. I was one of the 7 people who got malaria from the mosquitoes that escaped from the experiment. We lived in the employees housing. The superintendent of the hospital was a Jewish dr who survived WW2. I was angry for years until I learned it was not his idea or plans… and that experiment was also done at other hospitals.

3
Reply
used to work at cher

i have seen what look like a woman looking out one of the abandoned buildings i would park beside this was at the old cherry. a nurse told me while she worked there she saw a patient walk out of one room unto another room the nurse went to investigate and everyone was asleep.

That is really mysterious. Thanks for sharing this blog. i find it very interesting.

This man who was deaf mute used to help my father around the house. Unceremoniously called “dummy”. He was always kind and polite to us as kids, mom and dad. My father treated him like the kind man he was and with respect. None of us kids were afraid of him. He would smile and grunt when we said hello to him. Yes we heard those stories about rape and castration. It was just not a story we put stock in. I am glad to hear an update, albeit heartbreaking. Thanks for sharing this story of employees kids who lived… Read more »

I would like to be able to contact someone to have my group do an investigation there. I am presuming that it is closed and no one is there anymore.

Suffocation cannibalism necrophilia practiced by nurses aides and doctors has spilled into the streets of Goldsboro NC from this hospital with police participation. Forced bestiality rapes by police using expensive police dogs these officers “the dogs “are no longer the police officers they once were. Seymour Johnson Soldier involvement. Don’t send your children or loved ones here for evaluation. Amen

How could one go about doing a Paranormal investigation at this place? Anyone know.